Roland's TR-808 is a stone cold classic in the history - and the present - of music technology. But its story has a few more twists and turns than you might have guessed...

Despite an initial impassive response from critics, the Roland TR-808 was the best-selling drum machine of all time. Its impact upon popular culture and music production is unparalleled, not just for a drum machine but for any musical instrument ever made.

It was capable of producing a variety of extremely distinctive drum sounds. The most famous is probably its huge booming bass drum. Its snare is also very distinctive, which can provide a pretty powerful punch when processed and mixed correctly. The cowbell is another note-worthy sound on the 808. Its analogue-produced clang is unique amongst cowbells and can be heard clearly at the start of Whitney Houstens “I Wanna Dance with Somebody” punctuated by the equally as distinctive claps.

The congas on the 808 sound more like bubbles popping rather than actual congas but again provided some very interesting rhythm sections on dozens of dance records and another essential element of the 808 was its rim-shot. A wonderfully cutting sound that contributed to the top end of many House and Techno records. It also contained a clave, a maraca sound, cymbal, and hi-hats, both open and closed. Realism was never on Roland’s agenda. They had far more interesting intentions, with ambitions to replace existing traditional drum sounds with a synthetic, more futuristic palette but unfortunately the world wasn’t ready for such innovation.

On its release the reception was lukewarm at best, with many critics deeply unhappy, complaining the sounds it contained didn’t sound like real drums at all. Derogatory terms such as toy drums and tinny-percussion were used to describe the TR-808. Ironically, the unnatural sound of the 808 was precisely the reason why it had such wide appeal with music producers only a few years later. Despite the initial downpour of negative reviews, there was one magazine that correctly predicted it might have more to offer than what most of its critics were insisting. In a 1982 review of the 808, Contemporary Keyboard magazine wrote that “it would become the standard for rhythm machines of the future".

Roland sold around 12,000 of the TR-808 and prior to its release, the only drum machines on the market were designed as accompaniments to organs, providing a rhythm section to play with. When Roland designed the 808, it was never their intention for the machine to become such a prominent feature of any recording so the last thing they expected was for the machine to be used as a lead instrument. They expected the drum machine to be primarily used for demo recordings. 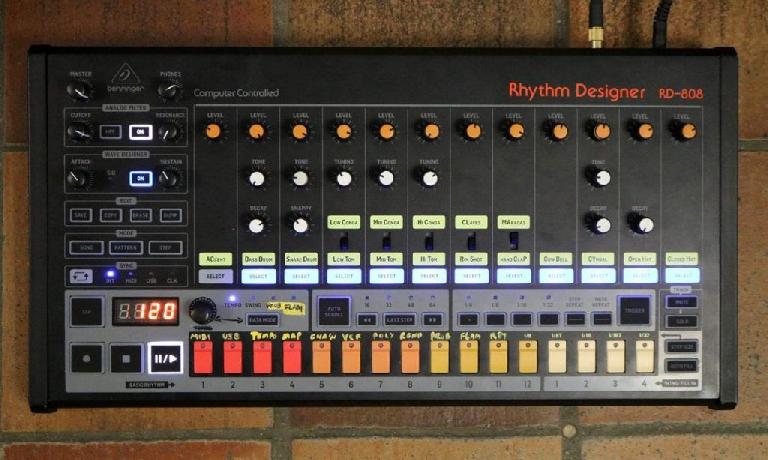 The first known live use of the 808 was by the Japanese band Yellow Magic Orchestra in 1980 on their track “1000 Knives” but it wasn’t until two years later in 1982 when producer Arthur Baker used it on Afrika Bambaataa’s “Planet Rock” that it would help shape the future of Hip-Hop. “Planet Rock”, was a fusion of a number of different tracks. Bambaataa took the beat of Numbers by Kraftwerk and cites Yellow Magic Orchestra, George Clinton, Gary Numan, James Brown and Sly & the Family Stone as musical influences for it. Following his unique DJ sets in the Bronx, New York at his infamous block parties, Bambaataa had the idea to fuse these varying influences together with TR-808 beats and with it, he and Baker inadvertently created electro-funk and helped lay the foundations of what Hip-Hop would come to be. Online magazine Slate claim "’Planet Rock’" didn't so much put the 808 on the map so much as reorient an entire world of post-disco dance music around it".

Following its success with “Planet Rock” and its use on the Marvin Gaye track “Sexual Healing” the machine experienced a short-lived bout of interest but soon after, the interest would wane and the machines were consigned to the bargain bins of second hand music shops where they could be picked up for as little as $100. This is how it made its way into the hand of producers who otherwise may not have been able to afford the machine. After being pushed to its limits and taking the lead on many influential records it would be synonymous with a variety of music styles.

It is fair to say that many popular dancefloor-friendly genres wouldn’t exist without the TR-808. House, Hip-Hop, Techno and Electro have all been touched greatly by its transistorised sounds but one genre in particular (that is probably more popular in the US than it is in the UK) is entirely dependent on the 808 for its very existence. This is the Hip-Hop sub-genre, Trap. Pretty much all Trap records that exist utilise a variety of sounds on the 808 in various ways not just for the drum parts but virtually every bassline on every Trap record is based on a sampled TR-808 bass drum which is then tuned to play a sub bass melody giving Trap its unique sound. 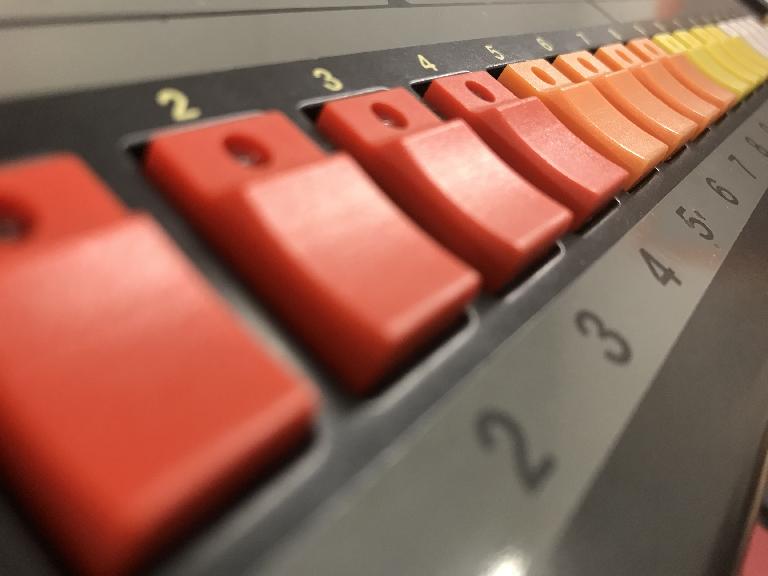 Trap also heavily takes advantage of the 808’s snare. Re-programming it, again in ways that the original 808 is incapable of. Performing frantic stuttered fills and modern loops unheard of prior to the DAW (digital audio workstation) music production revolution. There have now been several records in the genre that have moved away from the 808-only trend, but rarely does Trap not contain the pitched bass drum, a technique that has found its way into mainstream music with some of the worlds biggest popstars such as Katy Perry adopting the sound on her 808-laden trap track, “Dark Horse”.

What Made It Tick?

The TR-808 contained a number of ground-breaking innovations that helped forge its place in synthesiser history. It was Roland's founder Kakehashi who had the vision to initially develop the machine. Their chief engineer, Mr. Nakamaru was responsible for the design of the circuitry and credit for the software design goes to Mr. Matsuoka. It was the first drum machine to allow true programming. Earlier machines only contained preset rhythms but now for the first time, musicians and producers were able to create any pattern they could imagine.

Mr. Kakehashi said of the TR-808’s programming capabilities “[Although] the step-writing interface wasn’t new, it was the first time we paid more attention to people who programmed in real time. It used to be that our customer was the home-organ player. Then people in the music industry started to pay attention to our rhythm machines. Such a musician was agreeable to the programming by himself” said Kakehashi. He went on to say “That is why we developed the step-writing system, so you could slow the tempo down, enter your [own] rhythm events, and then speed it up and hear the realistic rhythm patterns that you just created”. The inclusion of individual volume controls for each sound and individual outputs was also a first for a drum machine at the time and it had the ability to synchronise to other devices using the DCB bus which was a big influence on MIDI which came into existence just a few years later.

In the Spring of 2015, I was boarding a train from Manchester to London, making my way to the capital for the UK premiere of a movie at the Southbank. There aren’t many drum machines that can lay claim to having a movie made about them. The 808 is possibly the only exception. The film, simply entitled “808” was a feature length documentary about the Roland TR-808. Crammed within the 107 minute viewing time was a series of anecdotes about how it had touched the lives of a whole host of artists who inadvertently changed the course of musical history with the use of the TR-808.

The movie features many international recording artists from Moby, The Beastie Boys and Norman Cook (aka Fat Boy Slim) and at the poppier end of the musical spectrum, Damon Albarn, David Guetta and Phil Collins to name just a few of the artists who spoke fondly of their experiences with the machine which transformed the very fabric of music production. The film ends by offering us a startling revelation by Roland's founder. Ikutaro Kakehashi claimed that a large part of the 808’s unique sound was due to a deficient component which subsequently, due to the lack of availability of the component, was the real reason why Roland stopped manufacturing the 808 machines.

Such was the influence of the 808, it made its way into the song lyrics of a variety of artists including The Beastie Boys, Kanye West, Outkast, Lil Wayne, Beyonce and more surprisingly Robbie Williams and Britney Spears.

At the time of its release its biggest rival was the Linn LM-1 but there were some huge differences between the LM-1 and the 808. To begin with, the LM-1 was significantly more expensive than the 808 with the Linn machine costing $5000 at the time of release whereas the 808 was a fraction of the cost at just $1,195. The LM-1 utilised pre-recorded sampled drums whereas the whole of the 808 drum machine created every sound it produced from inside its intricate analogue circuitry. It was such an incredible feat on its release, few people fully appreciated its achievements in its day.

Robert Henke, the co-creator of the ground-breaking software Ableton Live had great admiration for the 808’s internal circuitry. He said “The TR-808 is a piece of art. It's engineering art, it's so beautifully made. If you have an idea of what is going on in the inside, if you look at the circuit diagram, and you see how the Roland engineer was making the best out of super limited technology, it's unbelievable. You look at the circuit diagram like you look at an orchestral score, you think, how on earth did they come up with this idea? It's brilliant, it's a masterpiece.”

With the number of clones and software versions available today, the hard-to-find sounds are now easily accessible but if you ever have the chance to get your hands on the real thing, don’t pass on the opportunity as it is becoming increasingly rare as its popularity grows, the machine is more sought after than ever.

"Suddi Raval has been working in the music industry for over 30 years, with his roots in the legendary Hacienda nightclub, having co-wrote and produced one of the most iconic tracks in the clubâ€™s history, Hardcore Uproar. His band Together are the only act to have ever performed live at the infamous Blackburn Acid House parties. He wa..." Read More