Moog's Minimoog Model D played a pivotal role in the development of modern music from electronic to pop and far beyond. Here's its story from creation to the present day.

It takes some doing for a brand name to become so synonymous with its product that the public don’t even refer to the product anymore and use the brand name instead, sometimes completely forgetting there was ever another name for it. Some good examples of this are when we say Google to search for something on the internet, Hoover to vacuum and (in the US) Xerox to photocopy – incredibly, the trademark Moog was often used instead of the word synthesizer in the 70’s and there was good reason for this.

At the time there was pretty much no other synths available! Bob Moog’s contribution to synthesizer technology is unparalleled. He didn’t just design the world’s first commercially available synth, he did something far more profound that is taken for granted today. Mr. Moog and his team were largely responsible for the dramatic shift in the public’s perception of music created by machines. The Moog company were integral in the transformation of the music worlds view of recording made using synthesized sounds. Prior to their world-changing innovations that the Moog team were responsible for, the notion that music might be created by a machine was pretty much regarded as something of a gimmick. 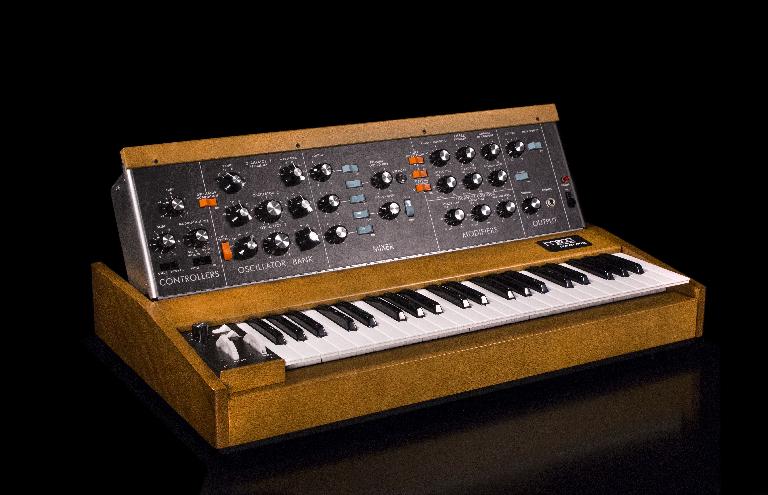 Whilst the concept of synthesizers already existed, most of the synths designed prior to Moog’s ground breaking modular and keyboard breakthroughs were either Theremins or hand-built bedroom experiments which lacked the sound quality we strive for today. The unmistakable Theremin sound was often the basis of many sci-fi movies in the 50’s as the other-worldly warblings they produced were perfect for informing the viewer a flying saucer from another planet was about to land on Earth. But there lay the issue. It was essentially a sound effect, a novelty. Not really considered a true musical instrument. At the time, few people had considered synthesized sounds would someday become a credible alternative to traditional instruments. That is until Bob Moog and his team came along and shook things up a bit.

How The Modular Paved The Way For The Mini 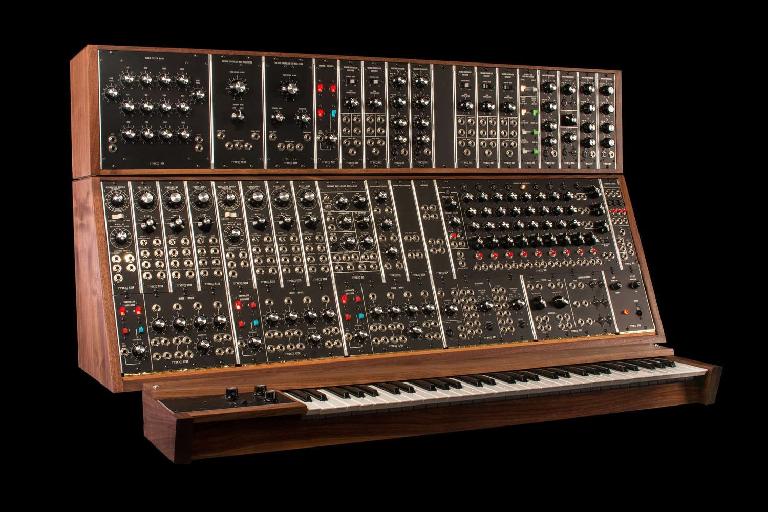 Its predecessor, The Moog Modular was first released in 1970. The name Minimoog came about due to the scaling down of the Moog Modular Synthesizer System. With a full modular system it was literally the size of a wardrobe due to the fact that it consisted of many individual modules, each of which performed a different task. Sound synthesis, envelope generation, oscillation, amplification, filter and so on. They were separately responsible for the various elements a synthesizer consists of. The modular design offered the user considerable flexibility to configure the machine in a variety of formations. Unfortunately, the colossal size of the modular systems made the segmental synthesizer extremely difficult to transport. Unsurprisingly, this made them very difficult to tour with. The solution was the Minimoog. There were a number of iterations before they perfected the design, hence the name Minimoog Model D. Suggesting, the model that made it to market was the 4th incarnation of their developments.

3 Is The Magic Number

The One And Only Innovator 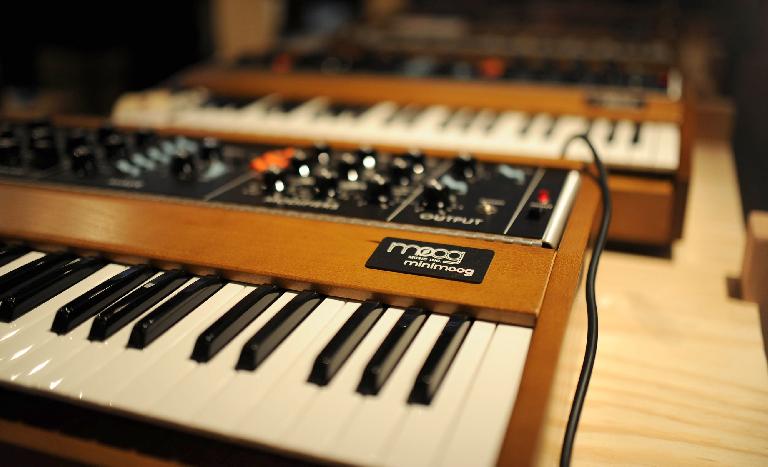 The innovations the Moog engineers were responsible for is quite staggering. Many of these are now typical elements in most synthesizers today. We take the pitch wheel for granted on synths as it is something we find on most keyboards nowadays. This was a Moog invention as was the very concept of the modular. The control of various synthesizer elements such as amplification, filter or oscillation by an electrical current was also something we have Moog to thank for. Another Moog invention was envelope generation, again now a staple of any modern synthesizer.

Bob Moog's creations were so successful, it was inevitable they would one day they would become ubiquitous in the synthesizer world, which makes it extremely difficult to pick the finest Moog moment.

Kraftwerk and the Moog

One of the first artists to produce a record using a Moog were German synthesizer legends, Kraftwerk. When they released their 23 minute synthesizer epic Autobahn in 1974, it must have sounded unlike anything most people had ever heard before as it achieved worldwide commercial success.

Gary Numan's band Tubeway Army used the Minimoog extensively on their album Replicas. The first single off the album, "Are Friends Electric" topped the UK singles charts ensuring an even wider audience for the Minimoog sound. Numan had no intentions of making synthesized music before he entered the studio to record his Replicas album. His band Tubeway Army were in to record a Punk album but he says the sheer volume of energy the Minimoog produced resulted in a quick rethink of the sound the band were to produced. With a number 1 single in the British charts and international success beckoning for Tubeway Army, the Minimoog’s demand was about to rocket to new heights.

Another contender for most iconic track to use a Moog is New Order's “Blue Monday”. Parliament, a funk band from another universe also made great use of their Moog when they released their single “Flashlight” in 1977. Trent Reznor of Nine Inch Nail has had a lifelong obsession with Moog synthesizers. The first synth he bought was the Moog Prodigy and he says that was a huge turning point for the music he was about to produce. After he released his second album “Downward Spiral” in 1989, Bob Moog himself was so impressed with Reznor’s use of his machines, he decided to pay the band a visit backstage at one of the Nine Inch Nails gigs, much to Reznor's surprise and amazement.

Arguably, the greatest use of a Moog which had Brian Eno describing the track as “the sound of the future” was Donna Summer's “I Feel Love” where every sound but the kick and voice was made on a Moog synthesizer.

Production of the Minimoog stopped in 1981 but with analogue synthesizers increasing in demand the Moog company decided to revisit their classic machine in 2002. It was redesigned by the creator himself, Robert Moog and released as the Minimoog Voyager but the excitement of the synthesizer communities reached fever pitch when the Moog company announced in 2016 that the original Minimoog Model D was to be released. The reissue was as close as they could build it to the original design. Despite Moog stopping production of them in 2017, brand new supplies of the iconic machines are still in stock in a few music instrument retailers. Admittedly, they’re almost the price of small car but if you can afford the $3500 price-tag, bag yourself one of the iconic synths before it’s too late. They’ll no doubt rocket in price once they’re gone for good!

Learn much more about making music with Moog synthesizers and software: https://ask.audio/academy?nleloc=category/audio/topic/moog

Suddi Raval has been working in the music industry for over 30 years, with his roots in the legendary Hacienda nightclub, having co-wrote and produced one of the most iconic tracks in the clubâ€™s history, Hardcore Uproar. His band Together are the only act to have ever performed live at the infamous Blackburn Acid House parties. He wa... Read More

Andy
Interesting article. I guess we all have a bias and have our own view of these things but I found the following really quite strange. â€œOne of the first artists to produce a record using a Moog were German synthesizer legends, Kraftwerk. When they released their 23 minute synthesizer epic Autobahn in 1974, it must have sounded unlike anything most people had ever heard before as it achieved worldwide commercial success.â€

Switched on Bach came out in 1968. Moog Indigo a couple of years later. Moogs were on numerous big movie soundtracks by 1970â€™s, Yes had number one albums in the early 70â€™s which had MiniMoog all over the place, Dark Side of the Moon one of the most popular albums of all time came out in 1973... VCS3 and Moog feature throughout. So yeh Autobahn was a bit of a hit and probably influenced a generation of synth heads ... but it was no where Even remotely close to being â€œone of the firstâ€.

I think itâ€™s a generation thing. If you were influenced by an artist or even a genre you see them as possibly more relevant to their time than they were. I know Kraftwerk were very influential but thatâ€™s not the same as being â€œone of the firstâ€.

Suddi
Hi Andy, As I stated in the piece it was "one of the first" not "the first" - and I am talking relatively (as in this was fairly soon after the release of the Moog if we consider it is still being used today) but do have a point. I probably should have included Pink Floyd but being such a fanboy of Kraftwerk I probably got a bit carried away with my hero worship of them. I will maybe edit the piece and add that in as a correction! Thanks for pointing it out! Suddi
Andy
Suddi I guess this follows a pretty typical trend in innovation. There is a very specialised group of early experimenters. Bob Moog worked with those guys and they influenced his early designs and concepts. Then there were very early adopters ..like the Beatles, Pete Townsend, Beach boys Etc who werenâ€™t involved in creating the instruments but were (nearly) the first to use them. Then Keith Emerson took one out on the road and inspired Bob Moog to build a more portable model for the stage ... and then people like Rick Wakeman and Rick Wright made them â€œmust haveâ€ instruments for musicians of a certain persuasion.

And THEN artists like Kraftwerk came along and what made them different was they inspired the next generation to make entirely new types of music.

Before Kraftwerk synths were just another tool to widen the pallet of an existing genre of music ... Prog rock started before synths were available. And classical music had been using Electronic Music Studios with oscillators etc before Bob came along with Voltage Controlled Modular systems.

Bands that came after a Kraftwerk were creating music centred around synths. That music would not have existed without synths. So from that perspective maybe Kraftwerk were â€œ ground zeroâ€.

And if you didnâ€™t live through this I can see how you might not think the first few steps were important and necessary. And as you point out it did happen relatively quickly.

I had a laugh at your comments ... youâ€™re right synths and therefore I have been around for a long time. Arh it seems like it was yesterday. Maybe I should ask berhinger to clone a new me.