This 500 series hardware reverb, Synergy R1 from Audified, is a full analog reverb unit that can be remote controlled from direct within your DAW.

Imagine a studio reverb with seven types of algorithms in synergy with three kinds of true analogue saturation, remotely-controlled from your DAW (Digital Audio Workstation) with an outstanding sound and world-class user interface. Imagine no more! Make room (in your 500 series lunchbox) for Audified’s SYNERGY R1, a studio reverb for a new era, enabling all of that... and more.

Modern-day producers tend to shy away from audio hardware effects in this day and age. Why? Well, the luxury of recalling such sessions like yesteryear’s production pros is a time-consuming process and shrinking production budgets dictate that today’s time-stressed producers often take to sacrificing CPU (Central Processing Unit) power for plug-in processing convenience. Conceptually — and in reality, as a ‘remote-controlled’ software/ hardware hybrid digital (REVERB)/analogue (SATURATOR) processing module for the 500 series modular rack frame format popularised by API, SYNERGY R1 is an altogether different production proposition, one that effectively turns modern-day production preconceptions on their head. How? How about the fact that users can control the device from their DAW, automate it, and store session settings, courtesy of its easily accessible, front facia-positioned USB (Universal Serial Bus) connection. And that’s just for starters. 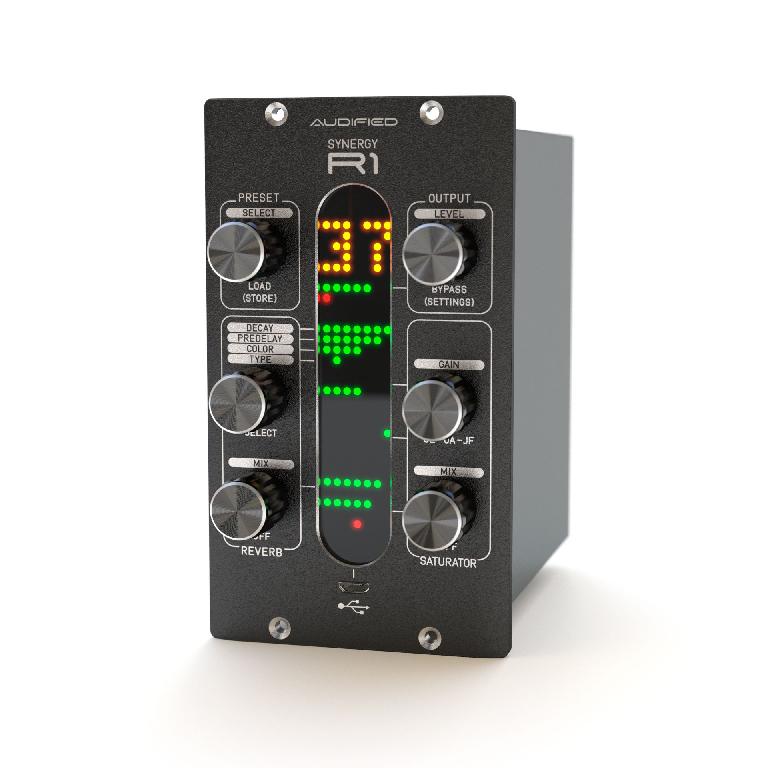 Seriously designed and sturdily built in the Czech Republic, beating at SYNERGY R1’s hardware heart are two switchable sections. REVERB is digital, providing premium-quality 24-bit A/D (analogue-to-digital) and D/A (digital-to-analogue) convertors, 32-bit floating point DSP (Digital Signal Processing) and true BYPASS functionality; all told, there are seven selectable reverb algorithms (simulating several different types of spatial acoustics), ranging from Room all the way up to Tunnel, and users can control four front panel-accessible parameters: DECAY, PREDELAY, COLOR, and TYPE. The second — true analogue — SATURATOR section features three switchable saturation circuits with GE (Germanium), OA (OpAmp), and JF (J-FET) types (that add harmonics to the signal) and a GAIN control. (Centrally positioned, a distinctive display is packed with Light Emitting Diodes to assist with parameter editing visually via numeric and bar indication of values — LEDs for the edited parameter change colour to yellow and the value is visible in the numeric part of the display while other parameter LEDs remain green; when editing is finished, the display returns to the default view — numeric area displaying preset number and all value indicators in green... or red if the parameter is switched off.) Both sections include wet/dry MIX controls, so SYNERGY R1 can be used as a 100% digital reverb or a 100% analogue saturator (and anything between those two worlds). 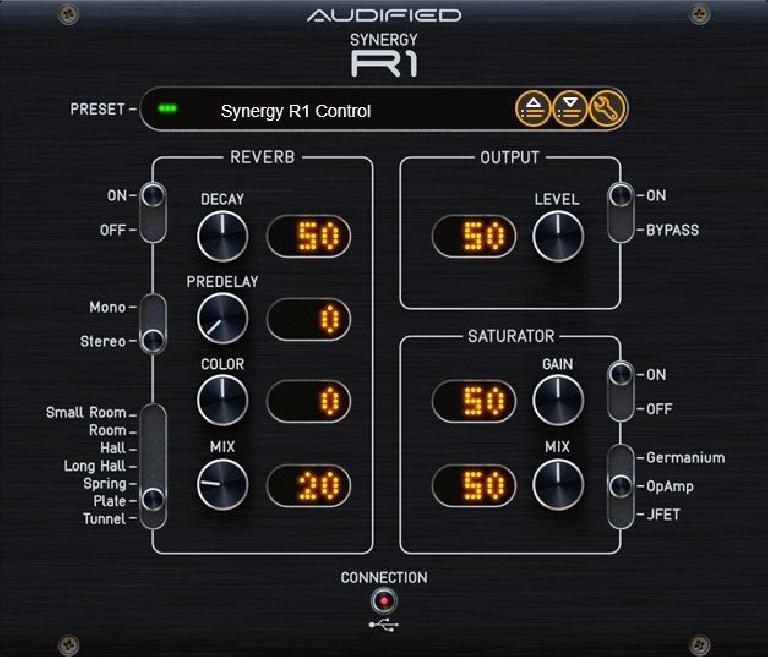 What truly sets SYNERGY R1 apart from the run-of-the-mill 500 series pack, however, is that each and every one of its functions can be remote controlled via the included SYNERGY R1 plug-in that can be used from within all major DAW host applications on Mac and PC (with AAX, AU, VST2, and VST3 support). Hardware parameters can be fully automated and are saved within projects. The control plug-in supports multi-instance usage, so several plug-ins could be assigned to one hardware unit. Also included is a standalone SYNERGY R1 control application, allowing for independent control of SYNERGY R1 via Mac or PC. Production pros of old school-style thinking, of course, can still get hands-on with the hardy hardware itself... if they wish to do so!

So who better to sing SYNERGY R1’s praises than the talented individual behind its innovative design? “I’m a reverb guy,” gushes well-known Czech composer/producer Boris Carloff, before adding: “I own 11 hardware reverb units in my studio, including an EMT 251, Bricasti M7, and AKG BX25 spring reverb — all classics, but I always dreamt of having something with the mellowness of old plate reverbs like the EMT 140. The analogue saturation of overdriving circuitry made their sound so lush, three-dimensional, and significant that I think I prefer them to any of the classic digital reverbs. On the flipside of the coin, I love the versatility of digital’s different algorithms. And, of course, I also like simple DAW control. So something with the best of both the analogue and digital worlds, with all their wonderful possibilities combined, seemed like a good solution to me, which was the thinking behind SYNERGY R1.” 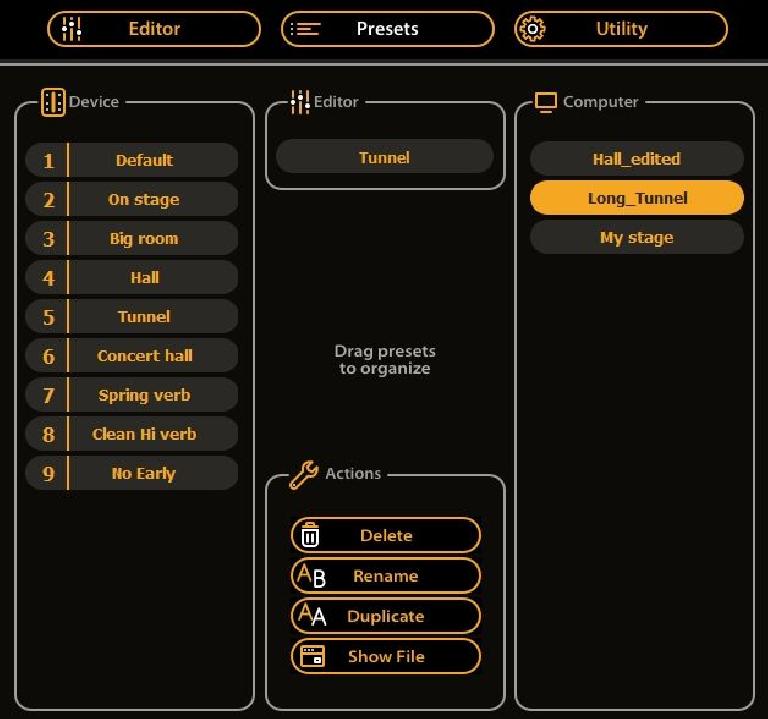 For all its (breakthrough) bells and (wondrous) whistles, what SYNERGY R1 really boils down to is its sound. “New high-end algorithms with real analogue saturation makes for an unbelievably lush- and nice-sounding reverb, but there is also an option to use clean digital reverb,” its creator continues. “With real bypass of the digital reverb it is also possible to apply three different types of parallel analogue saturation to your mix.”

An amazing mix of technologies, then, perfectly packaged into a stereo audio processing module powered by a 500 series lunchbox, but boasting DAW control, carefully tuned reverb algorithms, and the satisfying sound of real analogue circuitry. Concludes Carloff: “SYNERGY R1 is something new that sounds superb; I believe it’s a must-have processor for every studio — project or commercial.”

SYNERGY R1 is all set to make its debut on the world stage by being showcased by Audified’s North American distribution partner, Eleven Dimensions Media, on Booth 227 at Summer NAMM 2017, July 13-15, Music City Center, Nashville, TN, USA. Ultimately, witnesses will want to either add this ‘remote- controlled’ software/hardware hybrid digital (REVERB)/analogue (SATURATOR) processing module to their 500 series lunchbox or get themselves a 500 series lunchbox specifically to add a SYNERGY R1 — or several — to their studio setup!

SYNERGY R1 is scheduled to start shipping in September 2017, when it will become available for purchase through Audified’s growing global network of distribution partners — including Eleven Dimensions Media (https://www.11dmedia.com) for North America — with a projected MSRP of $1,399.00 USD.