Superbooth 2017: All The Latest News Here

All the latest gear, synth and music machine news, videos, interviews, etc from Superbooth 2017 in one place.

We're busy covering every booth, every corner, every grain of Superbooth 2017 in Berlin between 20–22 April. We'll have video, news, previews, interviews and more from the best synth trade show on earth.

Most recent news and stories will appear at the top of this list. Enjoy :)

This robot-based machine has been specially developed to control every fader on the Yamaha reface CS synthesizer. And it's cooler than words can express.

At Superbooth 2017 Polyend demonstrated the power and flexibility of some new features for their high-end hardware sequencer, SEQ.

We caught up with Johannes from DaDa Machines at Superbooth to chat about the innovative Automat that can be controlled by MIDI to mechcnically trigger sounds from real objects.

We weren't sure what to expect when we saw the Behringer Minimoog Model D clone being unveiled for the first time at Superbooth today... but it sounds really great! Watch the video to hear it now.

Superbooth 2017: This Drumming Machine Begins To Sing At 8000 BPM

As if Polyend's PERC PRO drumming machine controlled from any MIDI source wasn't cool enough, then Piotr from Polyend shows us this at Superbooth 2017. 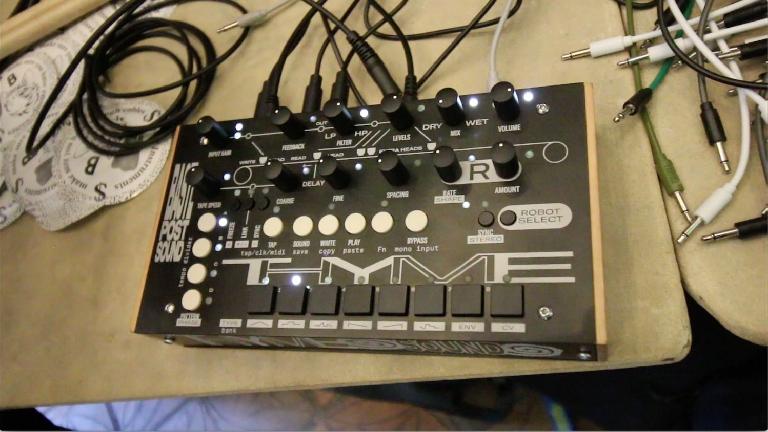 An effects machine. Robots? Tape Delay? Ah... it must be Bastl Instruments at Superbooth 2017! Enjoy the video!

Marc from eowave gives the cool prototype synth, the Quandrantid Swarm, an equally cool demo at Superbooth 2017 in The Fez in Berlin.

Superbooth 2017 is the perfect venue to release a new synth for smaller and bigger manufacturers. And it's a great venue for Yamaha to reveal their new MX88 synthesizer with 88 weighted keys.

Behringer surprises us with one expected and one unexpected synth announcement. The DeepMind 12 desktop was anticipated. The DeepMind 6? Well, here's another impressive synth!

This brand new polysynth from the mighty Novation derives some of its DNA from the Bass Station II but there's far more to it than that. We got an exclusive first look at this powerful instrument.

Soulsby Synthesizers will be at Superbooth 2017 in Berlin from 20th–22nd April. And they have two new products to show the world! They are at Booth H254 on the first floor.

Superbooth 2017: Experience The Buchla Easel in 3D Like You've Never Heard It Before

If you're at Superbooth 2017 in Berlin in a few days, the Friday performance will blow your mind. Steve H unleashes his 3D Buchla Easel Sound Canvases Project, an unmissable immersive experience.

While you won't be able to join a Leaf Audio DIY workshop at Superbooth to build the Microphonic Soundbox, you will (probably) be able to check it out and gear yourself up to make one this summer.

Sherman about to release a new analog Filterbank 2 version at Superbooth. Filterbank 2 Compact is a powerful analog distortion and filter processor. Here's what we know about it so far.

Behringer have confirmed they'll be launching two new synths at Superbooth. Our money is somewhere between an analog drum machine, DeepMind 12 desktop, Minimoog Model D clone and a $49 mystery synth.

In less than a month Superbooth17, probably the most hotly anticipated synthesizer event of the year, will be happening. And today the events, concerts and workshop timetables have been announced!