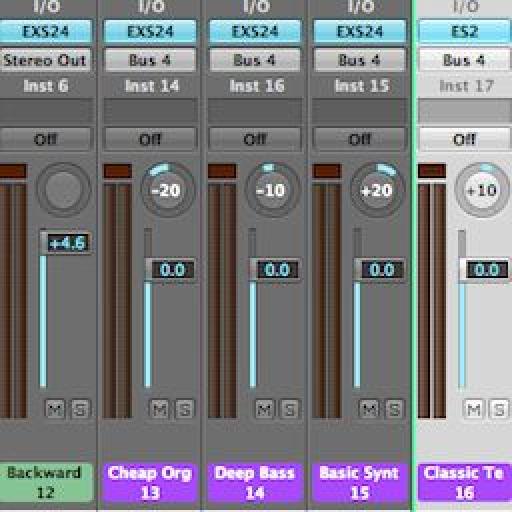 Language
It's all the rage to create bigger, fatter leads, pads, and other sounds for most modern music. Darren Burgos shares tips in Logic Pro that he's using on a current production with Paulo Ramirez.

In today's music, massive stacked sounds are pretty common for leads, chord hits, and pads. This is so popular now, that several companies are releasing instruments based on doing this very thing. Tone2's ElectraX for example is basically 4 instruments in one, that can either be played separately, or all at once.

In this tutorial, I want to show you a couple of simple tricks that make it easier to create, and play, stacked sounds using either Logic's built-in instruments, or any third party ones too. I'll be using a stack I made in a remix I'm currently working on with LA based DJ/Producer Paulo Ramirez, but you can easily follow along with this in your own project, or create one from scratch.

Add an EXS24 Sampler and choose the preset called “Cheap Organ.” It's under Factory Sounds > Synthesizer > Synth Leads. This is a nice bright and tight sound we can start to layer additional instruments over. 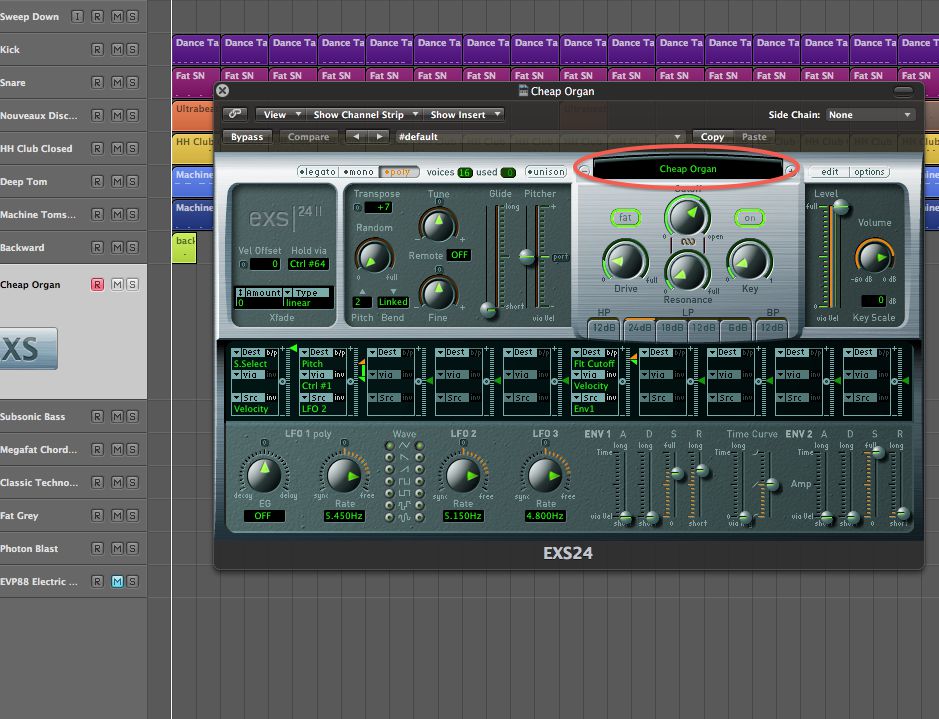 Next, let's add some depth to the sound. Add an EXS24 sampler, and from the Factory sounds, choose the Deep Bass preset from the Bass > Synth Bass sub folders. Now you'll notice that when you jump to a new or different software instrument in Logic, only that currently selected instrument will sound when you play notes on your controller. To play multiple software instruments simultaneously, simply enable the “R” button on its channel. Do this now on the first sound we just added, and both sounds will play back at the same time. 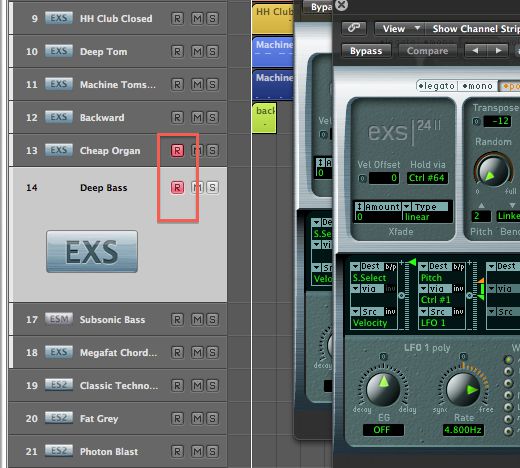 For this third layer, let's add another EXS24. From the Factory sounds, choose the Basic Synth preset from the Synthesizers > Synth Leads sub folders, and make sure all three layers have their “R” buttons turned on. 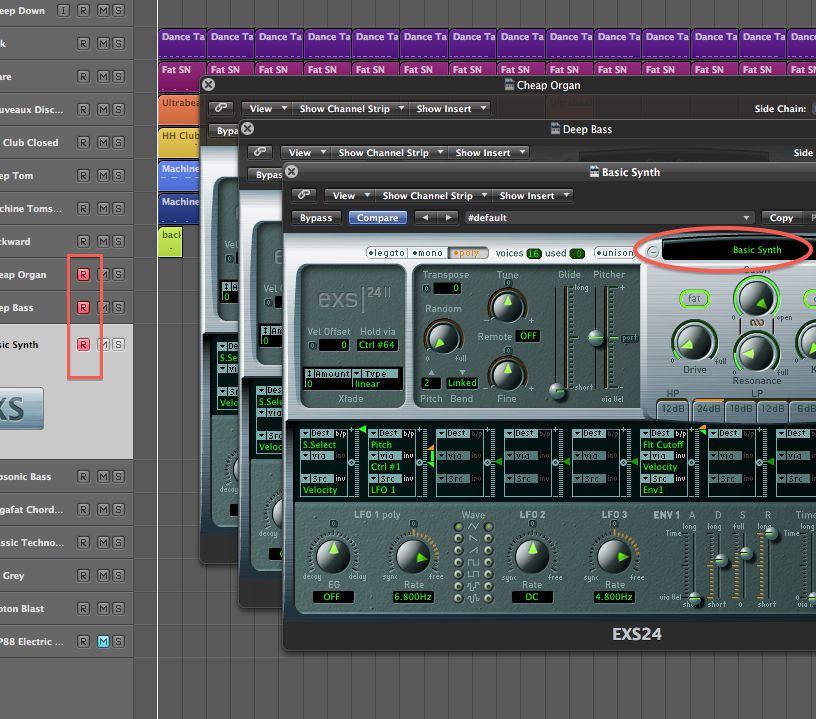 Let's transpose this layer. We'll basically be creating a chord that's played back on one single key. It's common for synths/samplers with multiple oscillators to be tuned to a “Perfect 5th.” The EXS24 instrument in the Synth Leads section is called “Basic Synth 5th” for example. This is 7 semitones above the root position.

Try this now on this Basic Synth layer by adjusting the Transpose parameter on the face of the EXS24. Set it to +7. That sounds cool, but now try some other values like a Major 3rd +4, or what I like to call the rave interval since so many 90's techno tracks used this! Try +3 (Minor Third) for a darker feel. Keep in mind that every note played on your controller will also be playing the interval you've chosen.

This may or may not fit in with the musical scale or chords of the song your adding it to ...but you should have no problem if you haven't already decided on your song's chord structure. I went with the basic +7 Perfect 5th interval for this song. 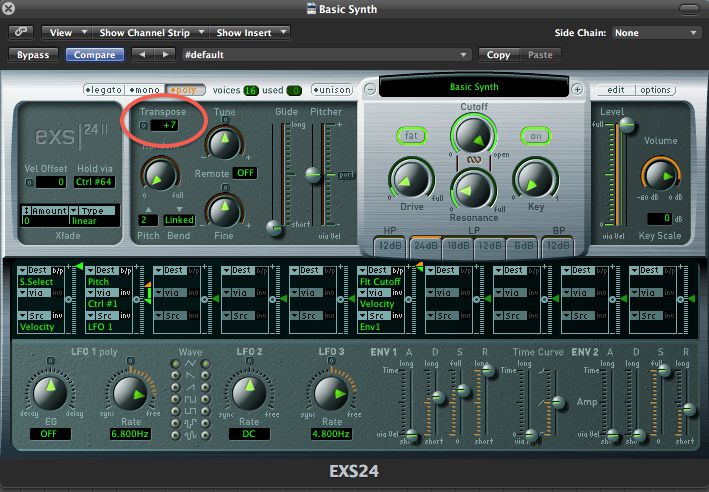 For the last layer, let's add an ES2 synthesizer, and Choose the preset called Classic Techno 03 from the Synth Leads menu. Sounds pretty good, but the sound needs to be wider, and a little reverb might help too. 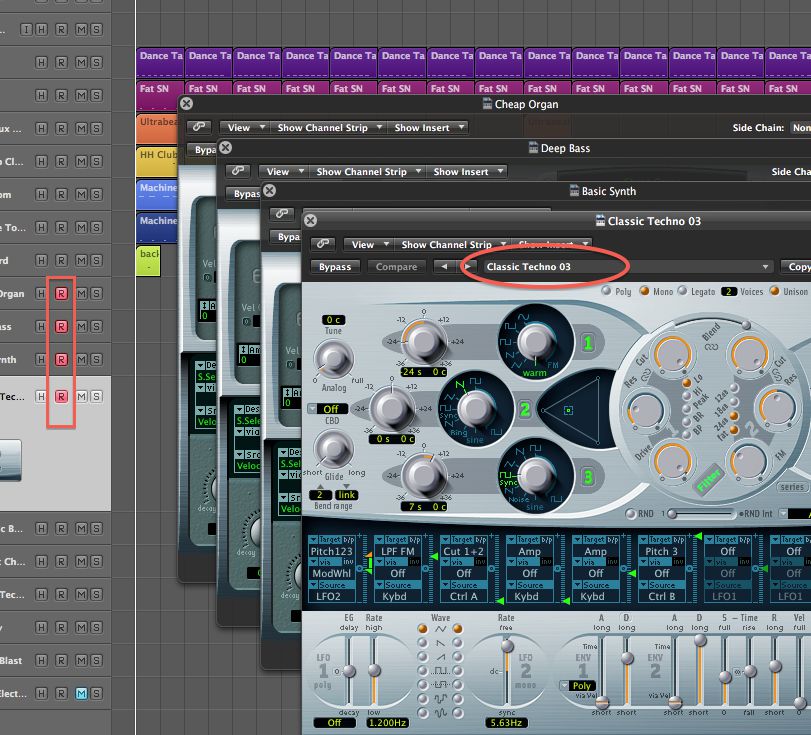 Let's open this sound up now. Go back to the first layer and set its pan position to -20, the second layer to -10, the third layer to +20, and the fourth later to +10. Notice that the deeper layers are closer to the center position. I did this so the sound doesn't feel lopsided. Step 8 - Output all Four Layers to a Bus

Now let's route the output of each layer to an available bus. I want to do this for two reasons. I want to compress all four layers to give them a more unified feel, and I also want to add some reverb to the layers simultaneously. From the output menu of every channel/instrument, choose the same available bus, then add a compressor and a reverb to that bus. The bus will appear next to the instrument when you select it from the list. At this point you might want to adjust each individual layer's volume, so all the layers can be heard equally. Now let's record a part while all four channel/instruments are “R” record enabled. Click the top layer, press the record button in the transport window and play in a part. Look what happened ...aliases of the one MIDI recording you made were placed onto the other three instruments below it! When you're ready to edit your recorded MIDI part, simply edit the top one, and all 4 parts are edited simultaneously.

Hope you enjoyed this technique for stacking sounds!

Angie Terrell
Darren,
Really enjoyed this article. Question: how do you choose the synths you want to layer? For example, in this you've chosen the 4. Did each have a particular part of the spectrum that complemented each other? What would be your advice on choosing the synths to layer?

Darren Burgos
Hi Angie, that's a great question. I think about frequency of each layer and the sounds characteristics. The first layer was the sound I started with, the second one I chose because I thought the sound needed depth, the next was chosen to add some high frequencies, and to add the perfect 5th interval, and the last one was another middle type sound to add a techno feel to the stack.