The latest keyboard from StudioLogic features 3 sound engines, 9 programmable sliders and a semi-weighted keyboard with aftertouch amongst other tasty things. 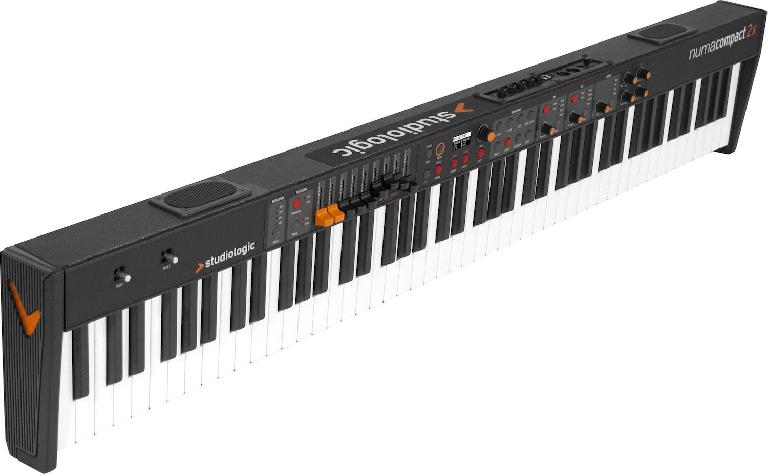 The Numa Compact 2x features a tone-wheel organ engine derived from the acclaimed Numa Organ along with Studiologic’s Sledge synthesizer engine and a sample-based sound engine with 88 factory sounds including concert pianos with string resonance and 1GB of updatable flash memory. Its nine programmable sliders control organ drawbars, synthesizer parameters or MIDI CCs. Artists can create their own sounds, add versatile digital FX from the Numa Compact 2x’s two double effects processors and save to one of the 99 programmable presets. With its 2-zone MIDI controller the Numa Compact 2x can control an external MIDI engine and play back and record the audio through its fast USB audio connection, built-in amplifier and speakers.

Professional stage and studio musicians can combine the Numa Compact 2x with a MIDI controller keyboard such as Studiologic’s SL73 or SL88 for a powerful two-keyboard setup that combines multiple piano, organ and synth sounds with the SL’s hammer-action keybed and MIDI control capabilities at a combined cost that rivals many single-instrument setups.

Produced in Italy and highly affordable at a MAP of $699.95, Studiologic’s new Numa Compact 2x is a compact music studio with versatile features and high sound quality. Audition this great new MIDI Controller at the 2018 NAMM show, Hall A, Booth 11110 and at Studiologic dealers soon.