Language
In part 3 of our series of the science of studio acoustics, Joe Albano delves into issues related to mid- and high-frequency reflections.

In the last installment of this series, I covered a low-frequency room problem: standing waves, or room modes. This time up, I'm going to start going over issues related to mid- and high-frequency reflections.

Just as with low frequencies, when mids and highs come up against room boundaries, they're either transmitted, absorbed, or reflected. I'll discuss the balance between absorption and reflection in the next article, which will cover ambience (room tone), and issues of transmission in the last piece in the series, which will focus on soundproofing. This installment will start with the physics of reflections and the interaction of direct and reflected sound waves in a music space (finishing up the in the next article).

When sound waves reflect off room boundaries (walls, floor, ceiling) or other surfaces in the space, the reflections will interact with the original direct sound wave—the wave emanating directly from the sound source (in a control room this would be the monitor speakers). When a direct and reflected version of a wave meet up, there is interference, and exactly what happens depends on the point in the cycle that each wave is in. A quick reminder, for context: a sound wave consists of alternating cycles of positive and negative air pressure variations—compressions & rarefactions—which occur at various locations in the room along the path of the wave (Fig 1).

The physical wavelength of each cycle is determined by the wave's frequency, measured in cycles-per-second, or hertz. As we saw last time, low frequencies (below around 300 Hz) have long wavelengths, and when reflections create interference effects, the resulting boosts or dips in level at the affected frequencies are localized to specific areas of the room, resulting in a different tonal balance depending on where you are in the room. The same thing happens with mids and highs, but since the wavelengths are much shorter, the effect is spread out throughout the room. But there is still an audible effect on the sound in that space.

All complex sound waves are made up of a combination of sine waves—the harmonics and overtones that give each sound its own distinct tonal character. The position from the beginning to the end of each sine wave cycle is measured in degrees—0° at the start of the cycle, 90° at the positive maximum (highest air pressure variation—compression), 180° halfway through the cycle, 270° at the negative maximum (lowest air pressure variation—rarefaction), and 360° at the end, when the next cycle begins (Fig 2). 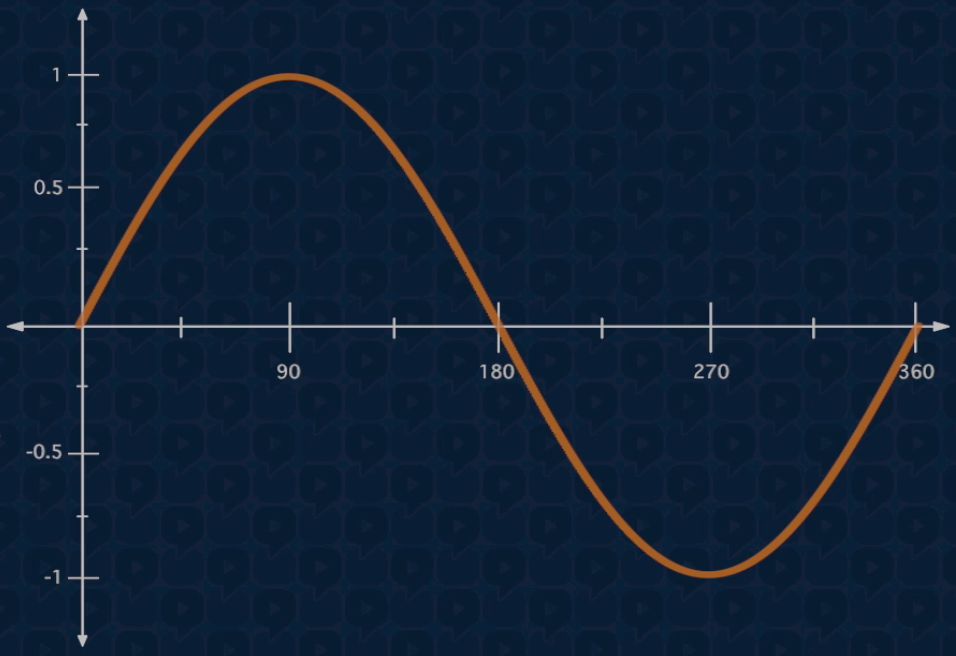 Fig 2 A single cycle of a (sine) wave measured in degrees of phase.

If a reflected version of a wave meets up with the direct wave, what happens will depend on where each wave is in its cycle. If the direct and reflected waves should happen to meet with both at the start of a cycle, the result would be reinforcement—the same sound, only louder. But if they meet up when one is at the beginning of a cycle, and the other is, say, exactly halfway through (180°), the equal but opposite energy will cancel out any sound completely, leaving silence (Fig 3, top). What I'm describing here is the relative phase of the two waves. 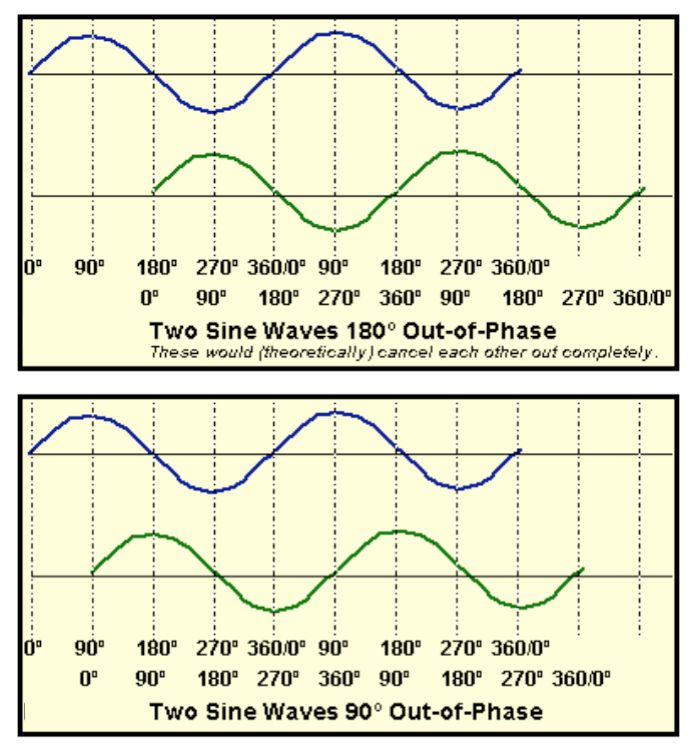 A wave and its reflection that are in phase (0°) will reinforce; if they're 180° out of phase, they'll cancel to silence. At any other phase relationship, there'll be partial reinforcement or partial cancellation (Fig 3, bottom). But so far I'm describing simple sine waves—to understand how this applies to the effect of reflected sound waves in a real room, we have to apply this to complex (musical) waves.

Real sounds—musical tones, voices, etc.—are made up of many individual sine wave harmonics and overtones, and the particular balance of these gives each sound its unique tonal character. Though there is some mathematical relationship, the harmonics and overtones have different frequencies, with different wavelengths, so the different harmonic and overtone components of the complex wave will have different phase relationships at the point of interference. As a result, some harmonics/overtones are likely reinforced, or partially reinforced, and others cancelled, or partially cancelled. This changes the balance between those harmonics & overtones—since it's that balance that gives the sound its unique tone, or timbre, the tone will be altered, to some degree. This effect is a natural, and unavoidable, consequence of making sound in an enclosed space—the technical name for it is “comb-filtering”. 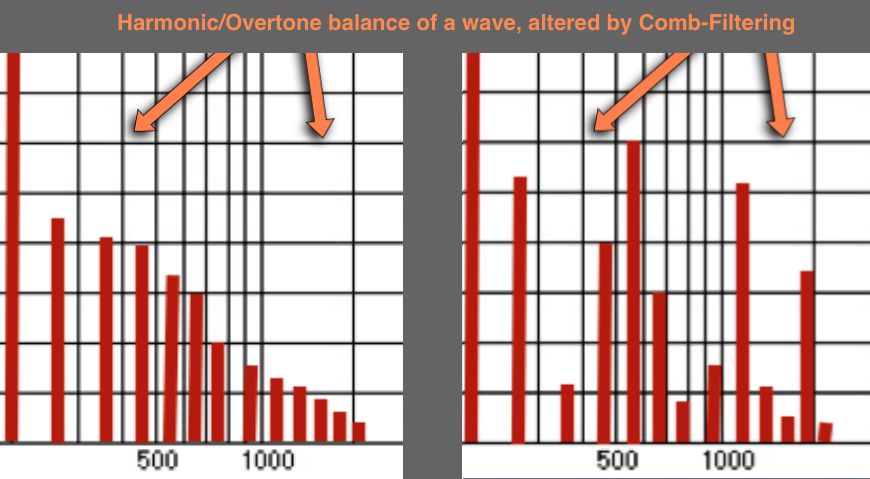 Fig 4 A typical altered Harmonic/Overtone balance (and resulting tonal change) that can result from Comb-Filtering.

Audio Example 1 The kind of tonal alteration that can result from Comb-Filtering (Dry; then Comb-Filtered, from a single strong reflection):

In and of itself, this is neither good nor bad. Since mid- and high-frequency reflections have short wavelengths, the tonal variations of the Comb-Filtering effect are typically subtle, and spread out fairly even throughout a room (unlike with low frequencies where they are localized to specific areas), and if the amount of sound contributed by reflections doesn't overpower the direct sound, the added “ambience” can enhance the experience of listening to music, adding a sense of depth and fullness to musical tones. In fact, most instruments tend to sound weaker outdoors, where ambience is lacking—that's why we don't want to record or mix in a totally dead space. But if the tonal changes from comb-filtering are too strong, they can interfere with our ability to capture good recordings and achieve well-balanced mixes.

Normally, the direct sound waves are stronger than the reflected waves, which lose some energy as they bounce off room surfaces and travel greater distances through the air. But sometimes, when a wave reflects off a nearby surface, the reflected wave has a fairly short path to the listener's ears, and has enough energy for the resulting comb-filtering to cause too much of a drastic change in tone, or a change that can interfere with the clarity of the sound. In a control room, we need to hear the direct sound from the studio monitors clearly, so we'll know exactly what's in the recording. If we think a sound needs EQ, or artificial reverb and ambience, we can only make these decisions properly if we can trust the sound from the monitors. But if there are overly-strong short reflections present, the tonal variations they can cause may skew our perception of what's in the mix, and lead to poor choices. For example, if there are excessive reflections in the mix room itself, a mixer might not add enough artificial ambience, thinking the mix was already “wet” enough—this might lead to a mix that sounds overly dry or dead in other playback environments.

Another good example of this is panning. Panning—even though it relies on aural illusion—is a good way to add clarity to a busy mix. Positioning different elements in different left-right locations can help open up a mix, even before we get to EQ and other treatments. But humans locate sounds not just by level differences between left & right, but also by which ear perceives the wave first—this is called the law of the first wavefront. If a panned instrument's wave arrives first on the left ear, and a reflection arrives later at the right ear, the listener will still subconsciously locate that instrument to the left, though with its tone slightly altered by the inevitable comb-filtering from the reflection. But if the reflection is too strong, this can throw off the listener's subconscious localization, resulting is a mix where instruments' positions all kind of blur together between the speakers, with a resulting loss of mix clarity, making it more difficult to fine-tune the mix.

These kinds of reflection issues are most severe when particularly strong reflections come from surfaces close to the sound source, and meet up with the direct sound at the listeners' ears with enough energy to cause excessive tonal-altering comb-filtering, or interfere with the subconscious mechanisms of hearing that we rely on, especially when mixing. Fortunately, it's a bit easier to eliminate problematic mid- and high-frequency reflections than low-frequency standing waves. Since the wavelengths are shorter, they can be absorbed by the kind of foam materials that are commonly found in studios. Depths of two or three inches—useless for controlling bass frequencies—will successfully absorb sound waves from about 1 kHz (1,000 Hz) up, and these products, which are relatively inexpensive, can be employed to control the amount and source of reflected sound in a music space—more on this next time.

But how much of this damping should be used, and where should it be placed? It's a balancing act between taming potentially problematic reflections—the kind that can interfere with getting good sound—and overly damping down the room, making it too dead—a poor environment for recording and mixing activities. One of the potential sources for problematic short reflections is the console/desktop itself. A large, typically somewhat reflective surface, this can't be totally eliminated in most situations (some mastering environments do away with it), but you can take some care in aiming the monitors so the highs fire over the console surface towards the ears of the listener in the sweet spot, with as little reflection off the console surface as possible. 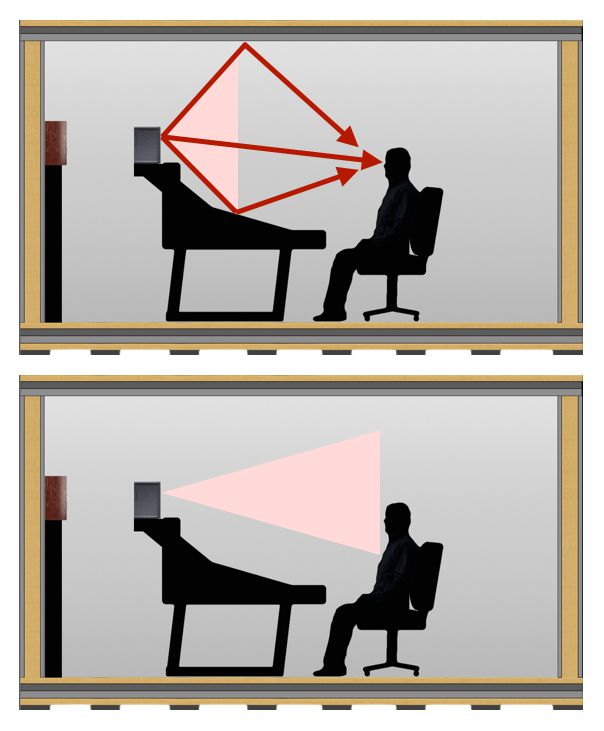 Employing a pair of studio monitors with a narrower vertical dispersion angle, and angling them so their tweeters are aimed at the mixer's head and not down at the console, can help with this—Phase interference is most critical at the higher frequencies, which our hearing systems utilize for localization and subconscious perception. Many monitors have wider dispersion in one direction, so positioning them horizontally or vertically can make a difference, and some speakers allow you to unscrew and reposition the tweeters for optimal dispersion in either horizontal or vertical placement.

Reflective walls (and ceiling) near the speakers can also be a prime source of the kind of strong, short reflections that can compromise clarity—even somewhat longer reflections can introduce issues. Sometimes a sound wave bounces back and forth between parallel surfaces, reinforcing, setting up a “ringing” tone at the affected frequency—this is called a “flutter echo”, and can be very distracting even if it's fairly low in actual level.

There are ways to approach treating a room to eliminate artifacts like flutter echoes, and to control the balance between direct & reflected sound (ambience) for the best compromise between clarity and liveness. Solutions may may differ somewhat for control rooms or live recording (Studio) spaces. Since I'm out of room, I'll pick up here in the next installment and continue this topic, before wrapping up the series with a look at soundproofing. 'Til then...