Language
In this new mini-series, Joe Albano demystifies the science of studio acoustics. Part 1 deals with common room issues and applies to all of us who have home or pro recording and mixing studio spaces.

So much of the effort we put into setting up our studio spaces'"big or small'"is focused on gear, but it's important to remember the one component that probably has the biggest effect on the sound quality of the work we do'"the room itself. There's no getting around it, everything we do during tracking, mixing, and mastering, is based on what we hear during sessions in our control room spaces, along with the effect the live recording space has on the sound we capture with our mics.

If you can't trust the room you work in to give you an accurate idea of what your recordings and mixes really sound like, then you can't really trust your choices. Will my mix sound this way in other listening environments, or am I reacting to some specific room tone, and making tweaks that will sound dubious, at best, in other listening spaces? Will the ambience in that vocal recording, that seems to be helping it blend in the mix, end up making it sound too distant, when the mix is heard in a space with a drier acoustic?

These are the kinds of issues that can trip up even experienced engineers and producers. So, to get the best results in all your studio endeavors, it pays to spend some time analyzing your space, and, as much as possible, optimizing it for the most neutral, most reliable sound quality it can provide. 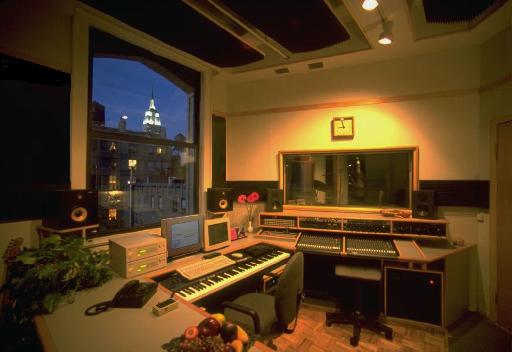 Of course, this is easier said than done! Many room issues may require highly technical analysis, with test gear that's beyond the reach of the average small or home studio operator, and sometimes the best solutions for room problems can involve fairly major construction, an option that probably isn't available to most people. That said, however, there are still quite a few steps that anyone can take to improve the sound quality and, most importantly, the linearity of their working environment, and while you may not be able to fine-tune your personal recording/mixing space to the level that high-end studios do, you can still eliminate many of the most vexing flaws, and shape your environment to be much more amenable to the creation of good recordings and mixes, that 'travel' well, and stand up to even the best studio efforts!

There are quite a few areas, when it comes to the behavior of sound waves in a studio space, that can be addressed, even with a minimal budget, as long as you have the necessary familiarity with the way sound waves interact with room surfaces'"the basic physics of audio in enclosed spaces. Now, as soon as I say 'Physics', I know a lot of people immediately start to glaze over'"hey, I just wanted to do music, not science! But then, everything we do involves sound and electronics, and you don't need an advanced degree in acoustics or electrical engineering to understand enough to be able to make some degree of beneficial change to the sound and layout of your studio space. And believe me, it's worth the effort'"your mixes will thank you, your clients will thank you, and there'll be that much less standing in the way of doing your best work!

So what are the problems that smaller studios'"control rooms and recording spaces'"are likely to have? I'll be talking about some of the most common of these in an upcoming series of articles'"how to identify and quantify room issues and possible solutions, with an emphasis on solutions for the budget-challenged. By way of introduction to the topic, here are, in no particular order, some of the room issues that typically need to be addressed in studio spaces, and that I'll be covering in this series.. 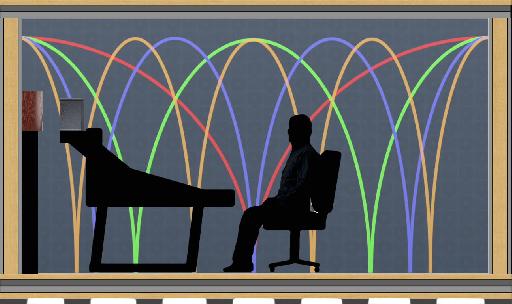 A graph of some of the Standing Waves (Room Modes) in a small studio Control Room.

This is a big one, maybe the most common cause of mixes that don't sound quite right anywhere but the room they were made in. In a live recording area, Room Modes might cause an audio recording itself to end up either too bass-shy, or too bass-heavy, requiring extra effort to fix the problem in the mix. Even worse, in the control room, Standing Waves in the room can fool a mixer into adding or removing bass to solve a problem that exists only in that room, with EQ choices that will only sound good only in that room, and will likely make the mix sound worse, even to the point of being virtually unlistenable, in other spaces that don't share the same specific low-end flaws! Standing Waves are also one of the toughest nuts to crack, in terms of solutions, because the best fixes can sometimes involve changes to the size and/or shape of the room itself, or the use of add-on structures that can eat up a bit of the room's square footage, and may be a tad pricey, if you're not a big DIY'er.

Phase Cancellations, or Comb Filtering: Sound waves reflecting off room surfaces can muddy up a space. When reflected sound waves combine with the direct sound wave'"the wave going straight from the speaker to the listener's ears'"after a very slight delay, cancellations and reinforcements will occur due to phase differences'"very small timing differences'"between the direct and reflected waves. This will result in changes to the balance of Harmonics and Overtones in the waves'"the components of a sound wave that give a particular instrument or voice its tonal character. This is known as Comb Filtering, and a little of it is a normal, natural part of the overall sound field in every enclosed space, and is generally a good thing. 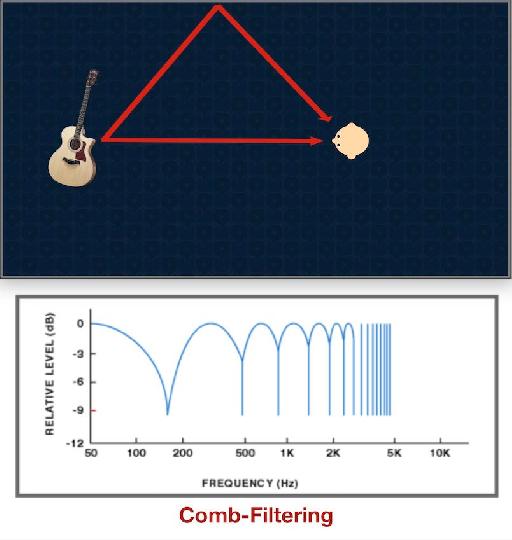 The path of a short reflection, combined with the original wavem, and a graph of the altered, Comb-Filtered response.

But too much of it, or phase interference that causes too great a tonal change, can make music sound thin, nasal, or edgy, and mixes can lose clarity'"instead of clearly hearing what all the parts in a busy arrangement are doing, everything can start to sound kind of washed-out and indistinct, making it difficult to achieve a good mix.

Echoes'"Slap Echoes, or Flutter Echoes: Multiple reflections tend to blend together for a smooth sound quality that can enhance both recording and mixing (see the next paragraph), but reflections with longer delay times, especially excessively strong, isolated reflections'"echoes'"will likely be detrimental at every stage of the process, and need to be physically eliminated by appropriate room treatments. 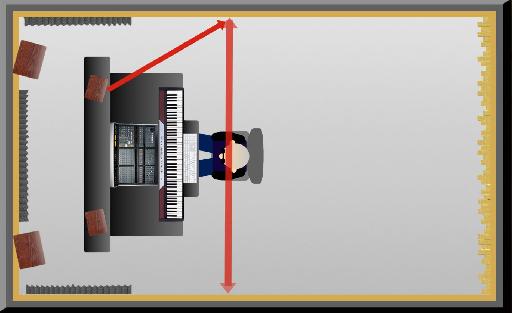 The path of a Flutter Echo, in a room with parallel surfaces.

Eliminating problematic mid/high-frequency reflections, both short and long, is a little easier to accomplish than dealing with low frequencies, but, again, you need to know what kind of treatment to apply, and where and how much to use, or you'll just end up substituting one problem for another.

Ambience: Ambience is the term used to refer to the overall liveness of a room'"the result of a normal, healthy balance of direct sound and multiple reflections in a typical enclosed space. Here, the key is to get that balance just right'"too much ambience might obscure the effects you may be applying to a mix, or make recordings sound too distant and hollow. Too little ambience'"too dry a space, like some of the heavily-padded vocal booths some people have'"won't support the sound the performer makes, leading to their voice or instrument sounding overly dry and weak, and forcing them to work harder to generate a rich, full tone, often resulting in either strained or lackluster performances. And even a control room, where you don't want the room tone to get in the way of hearing what's in the actual tracks themselves, still needs an appropriate amount of liveness, otherwise it won't be a suitable environment to work in, and you won't get mixes that, again, will 'travel' well to other listening spaces. There are  a variety of approaches to achieving a good ambient balance'"different for live recording spaces and control rooms, both of which I'll touch on as I go through these areas. 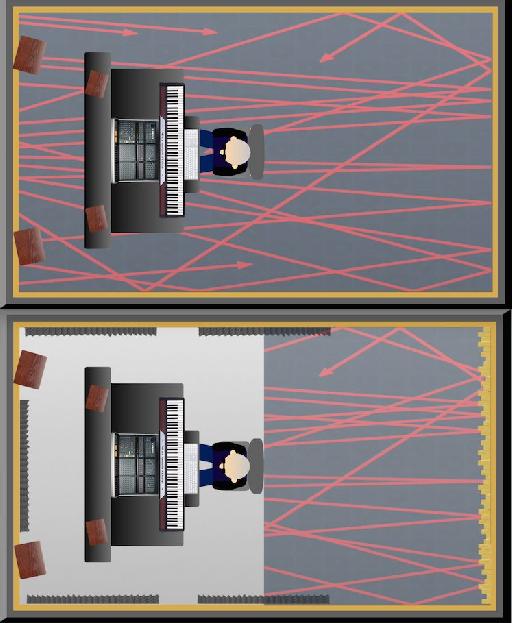 I've laid out a number of issues here, that typically bedevil small studios'"the first step in dealing with acoustic problems is to be aware of what you're up against. Over the next several articles in this series, I'll describe each of these in more detail'"what causes the problem, from a physical standpoint; how to measure or identify the effect in a particular room, and locate any specific problem areas; and what sort of treatment(s) can be applied to deal with it, again, with an eye toward minimum-cost solutions.

I'll start out next time with the issue that's probably #1 on most small studio hit lists'"Low Frequency Standing Waves / Room Modes. See you next time...