"Emotive" synth music is commonplace on Spotify and Youtube. But, on the new Oceana EP, Steve Horelick adds extra dimensions to the music with his trusty Buchla synths and heartfelt intention.

AA: Tell us about the sounds and artists that inspired you in the making of Oceana.

Oceana is all about inspiration. But its essence is internal: it’s from that heart place, that place of feeling, rather being inspired by external sounds or other artists. It’s about being in awe of the infinite vastness of our world and nothing on this planet can compare with the mysteries and awesomeness of the Oceans. The biggest challenge for me, as the composer and performer of Oceana, is to inspire the audience with my musical emotions and immerse them (pun intended) in Oceana’s world.

What is it about the Buchla as an instrument and a type of synthesizer that you love and that keeps you coming back for more? A lot of us have only experienced East Coast synthesis in plug-ins and Moog, Korg and Roland etc. synths… what makes a Buchla so special, unique and attractive?

Buchla’s modules are designed to work together in a way that few in any other modular synths achieve. When you have a Buchla modular system you have an instrument, not only collection of modules. Eurorack is a great standard that inspires the creation of a lot of amazing modules. But in my experience a eurorack modular system doesn’t behave, for the most part, like an instrument. They’re incredible sonic universes that can create killer sounds but that’s different from being an instrument. All of the modules in my Buchla 200e system work as a team in many, many ways; it’s built into their DNA. Perhaps Buchlas are perceived to be restricted or limited systems compared to eurorack. But it’s really not true because working within perceived limitations can still provide an infinite world of choices. For instance, a piano is a great example. It can be dissonant and harsh. It can be gentle and soothing. You can pluck the strings or mute them with your hands. However, I don’t expect a piano to sound like a Stratocaster. A piano is always a piano and a Buchla is always a Buchla and their “limited” sonic worlds are equally expressive.

I love the way Buchla’s instruments sound. You don’t take raw waveforms (like saw and square waves) and then do the East Coast subtractive synthesis / resonant low pass thing to get the timbre you want. Instead, you start out with a simple waveform and, via wave folding, build more complex timbres. What that means is that timbre construction is much less about filters. East Coast guys are obsessed with the sound of their filters and there’s a reason for that! It’s because without their filters all the saw, triangle and square waves sound, for all intents and purposes, exactly the same. When you listen to Oceana you hear (especially in the middle section) evolving orchestral timbres that are generated by the richness and variety of the Buchla Complex Waveform Generator AKA the 261e. I don’t even think it’s possible to get a saw or square wave out of the 261e! 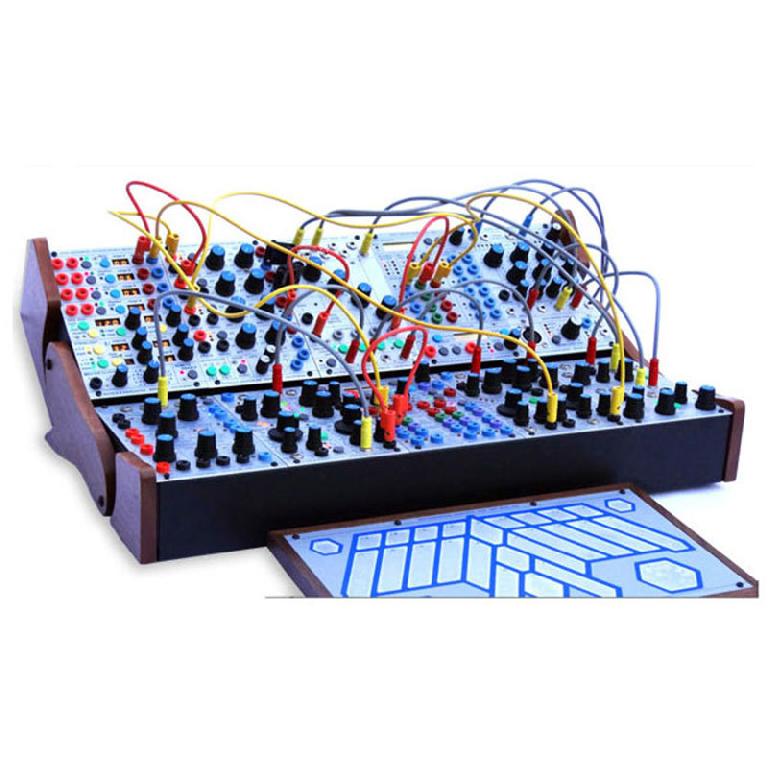 Oceana takes the listener on an incredibly emotional sonic journey and there’s barely a rhythmic beat in sight, yet it has its own pulse. Tell us how you use your Buchla synthesizer to create the multi-layered and multi-dimensional sounds that simultaneously make the listener move and that move through the listener.

Thank you! If that’s how you feel then I’ve achieved my desired goal! Technically there’s a lot going on here. Since I play live (and always in surround) I travel with a small portable system in a folding Buchla Skylab case. My current system has only a single waveform generator! I can achieve a wide variety of timbres primarily because of the Buchla Preset Manager which enables me to store 30 snapshots of every knob, switch and software-based setting on virtually every Buchla module. Oceana is both tonal and timbral and I can switch between different scales, modes and timbres with a single press of a button or tap of a key. To build complexity I use a series of software-based asymmetrical (independent) loops. A total of 11 to date until I upgrade to a more powerful laptop!

And what about the software side of things? What DAW, plug-ins and other tricks did you use to process the sounds on Oceana?

The Buchla is my palette and brush but Logic Pro X is my canvas and it’s a very complex canvas at that. The complexity comes from the fact that I use tons of reverbs, loops and auto surround panning patterns that create my sound world. I have a little Korg Nano Kontrol that is wired up through Logic’s Environment to open and close sends and to change the shape and tempo the complex surround patterns. All of these systems are based upon Fibonacci ratios, spirals and circular patterns that are inspired by how these patterns are found in nature.

Oceana dives deep into dark depths before re-emerging into lighter tonal territories and a brighter melodic narrative. Does your sonic journey in the EP reflect the current global state of the world?

That’s open for interpretation. However, I do believe that music is emotion in motion. Emotion, in its essence, has form and form is the foundation of music composition. So, yes, Oceana does dive deep into the depths and then re-emerges into the light. However, I premiered Oceana over a year ago for a live performance in New York so it predates this awful health crisis. But emotional musical journeys have both a collective gestalt while simultaneously open for individual interpretation. And it does, as it turns out, unintentionally shed a hopeful light on our current situation.