Language
Stereo mic'ing can add depth and vitality to your productions. Joe Albano explains the various different techniques and which ones you should use.

A majority of recordings undoubtedly utilize multi-mic'ing techniques - individual instruments and vocals are mic'ed up separately and recorded on separate tracks, allowing for maximum control over the individual elements of the arrangement. The stereo field in the final mix is created artificially via panning. But true stereo recording is still also widely done, both for complete ensembles like classical orchestras and individual instruments. For example, while the kit pieces in a drumkit are typically mic'ed up separately, stereo mic pairs are always also employed overhead, sometimes augmented by stereo room mics, and instruments like piano are mostly captured with at least a stereo pair of mics.

True stereo recordings are made with a pair of mics that stand in for the listener’s ears. Human stereo perception is based on both amplitude (intensity) and timing (phase) differences between sounds arriving at both ears. In particular, the timing/phase differences contribute to our sense of depth. The simple amplitude-based panning employed to create an artificial stereo sound field from a collection of multi-mic recordings doesn’t provide that depth, just flat left-to-right positioning. Besides capturing a greater degree of ambience (like piano lid reflections or room tone), a stereo mic pair may also preserve more of the natural depth of the stereo sound field.

There are a number of different ways a pair of mics can be set up to capture a true stereo sound field. This article will go through the standard stereo mic'ing techniques plus a couple of additional less common approaches as well, explaining the setup and applications for each.

Placing two mics on either side of an instrument or ensemble, from one or two to several feet in front of (and often slightly above) the stage or sound source is probably the most obvious way to set up a stereo mic pair. This approach will work well if the mics are carefully positioned, and it’s the basis for some other specific stereo mic'ing techniques as well. 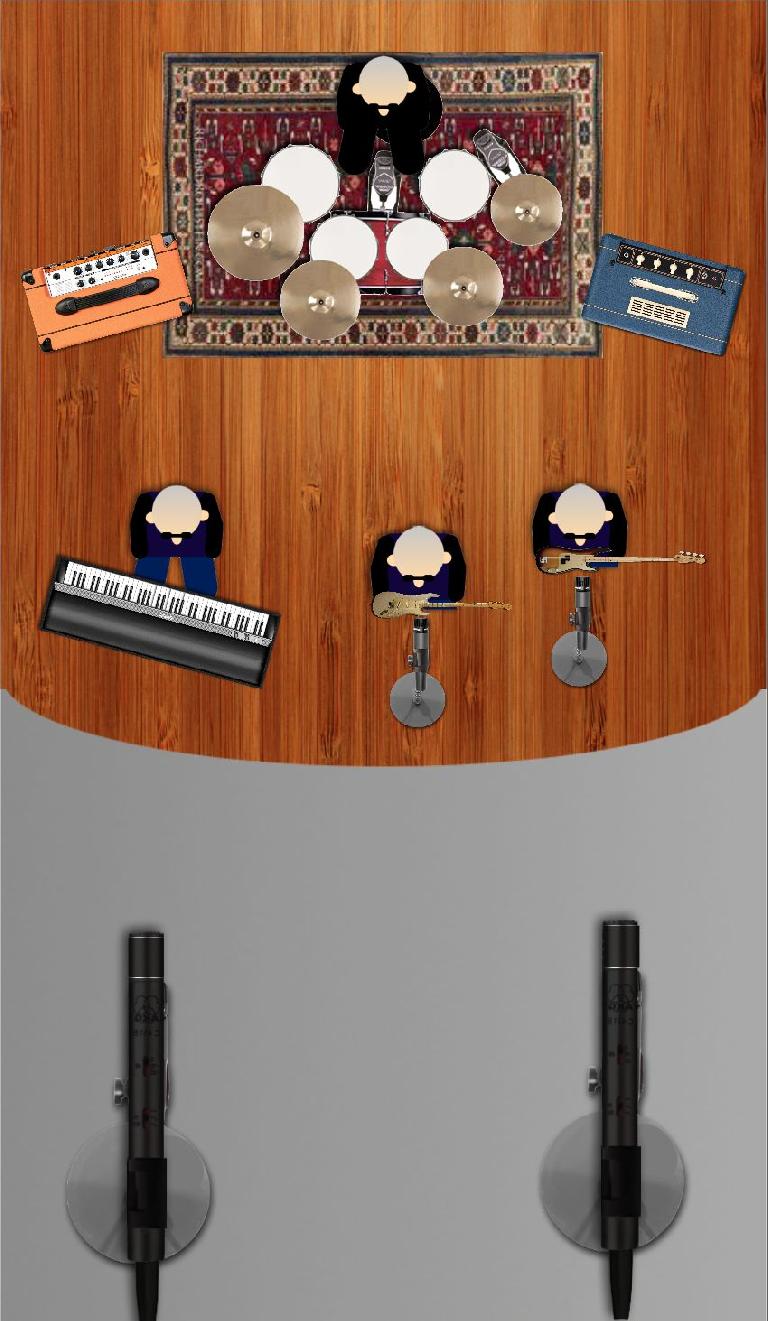 As with any stereo mic'ing setup, the mics will each pick up the entire instrument range (i.e. all piano keys) or ensemble (stage left to stage right), but with differences in amplitude (level) and timing (phase) between the two mics. These differences are what capture the stereo sound field, with the timing/phase differences potentially contributing to a greater sense of depth being preserved.

But to achieve the best, most natural stereo sound field, the mics must be positioned appropriately. Distance (from each other and the source) and angle are key. If the mics are too widely spaced, the stereo image of the resulting recordings may be overly narrow and congested; too narrowly spaced, and the stereo image may have too many notes or instruments squeezed into the far left and far right, often with a pronounced “hole-in-the-middle” effect. And the exact distance between the two mics will determine the time/phase differences between them. While this can provide a beneficial sense of depth, it can also cause problems  like undesirable phasing, especially if the stereo recording is narrowed or collapsed to mono , which is common in some listening environments. It’s important to audition the sound field before committing, ideally in both speakers and headphones, and adjust for the best sound.

Distance from the mics to the ensemble will affect the amount of natural ambience (the sound of the particular room, or recording space) that’s captured. Since this can’t be tweaked after the fact, it’s important to make sure that a suitable balance will be achieved before the final recording is made. Again, test recordings - especially in an unfamiliar location - are a good idea (record during rehearsal or sound check), to ensure the best quality.

Spaced-mic stereo recordings are often made using omnidirectional mics and this may for example be a good choice for an orchestral recording. The spaced omnis will pick up more of the room/hall than directional mics, and that ambience, the natural blending of the instruments, is an important part of the sound of an orchestra. In that case, distance from the source is critical to maintaining the best balance between clarity and liveness.

Of course, directional/cardioid mics are equally effective and can offer a bit more control over the ambience. Sometimes, more than one stereo pair might be employed, for example a closer pair and a more distant pair (like augmenting stereo drum overheads with room mics). These stereo recordings can later be blended to taste, offering more control over the degree of natural ambience in the final mix.

Another very common approach to stereo mic'ing is to have the two mics much closer together, achieving the stereo sound field by the angling of directional mics. Coincident mic'ing positions the mics’ diaphragms as close as possible, as in Fig 2, with one mic angled to pick up the left side and the other to pick up the right side, at approximately 90° angles to each other. This coincident technique is often referred to as XY, and with directional (cardioid-type) mics it can produce good stereo recordings. 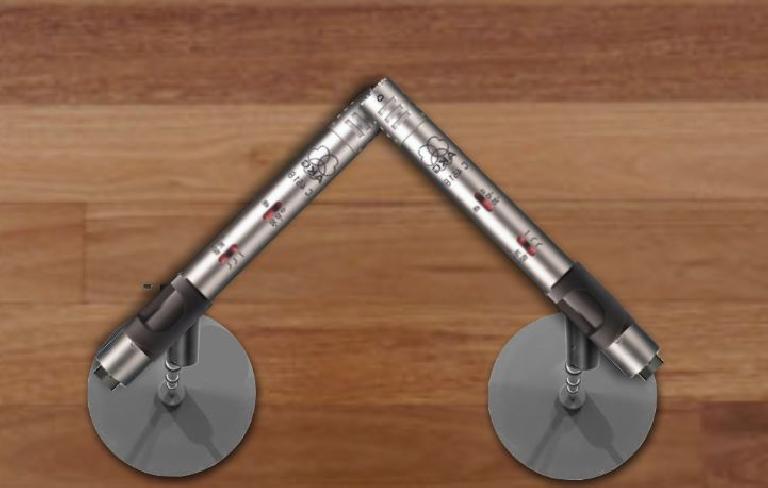 With coincident mic'ing, the stereo field is captured (almost) entirely via the amplitude differences between the same instruments being picked up by both mics. The mics’ closeness eliminates any potential phase problems between them, but also may produce less of a sense of natural depth and width. Widening the angle (from 90° to around 110°) can widen the image slightly, and sometimes Hypercardioid mics can be employed for a little bit of extra width and ambience.

As an alternative to directional/cardioid mics, bidirectional (Figure-8) mics can be used as a (90°) coincident pair, which is called the Blumlein system. The rear pickup brings in more of the room and can offer a bit more of a sense of natural depth, while still minimizing potential phase issues. Obviously, considerations regarding distance and the quality of the room itself come into play a bit more with this approach.

Single stereo mics are also available and they combine two mics into one housing (Fig 3). Naturally, due to the close placement of the two diaphragms, these are coincident systems, and they’re easy to set up and employ, though the best of them are often found at the higher end of the price spectrum.

Another very common and very popular approach is near-coincident mic'ing. The idea is to position the mics at more or less the distance (from each other) and angle of of human ears. This will capture both amplitude differences and time/phase differences (for greater depth) that should be appropriate, given their approximation of the human hearing apparatus. Near-coincident mic'ing should reduce potential phase issues, but still provide a potentially greater sense of depth than coincident placements. The exact angle and distance between the mics varies, and there are a couple of different approaches. The ORTF system spaces two cardioid mics about 17 cm (~ 6.75 in) apart, with a 110° angle between them, mimicking the placement and angle of human ears on a typical head. Amplitude and timing/phase information is captured as it would be by our ears (greater phase differences at higher frequencies), for a very natural stereo sound field.

The NOS approach is similar, but specifies two cardioid mics about 30 cm (~ 1 ft) apart, with a 90° angle between them. This adds a bit more phase information at lower frequencies, for a potentially more open stereo sound field.

Often, and especially with larger ensembles, additional mics may be added to augment a stereo pair. When using spaced mics, it’s common to add an additional (single) mic in the center, between the left and right mics. This can help to address any potential “hole-in-the-middle” that might result from the width of the source and the positioning of the stereo pair. One well-known variation (designed for orchestral recording) of the stereo pair + center mic approach is the Decca Tree. This employs a stereo pair about 6.5 ft apart, with a center mic halfway between around 5 ft closer to the source than the pair. The mics are typically mounted on an assembly and positioned several feet above the sound source (the conductor). 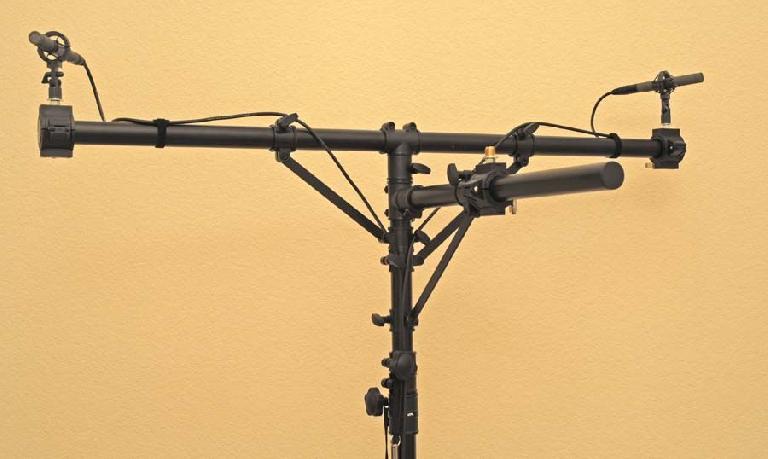 Very large ensembles, like a symphony orchestra, can be captured with a simple stereo or augmented pair, but it’s also common to see individual mics added for the different sections (violins, basses, trumpets, percussion, etc). These are often referred to as “spot” mics, and they can provide a little extra clarity and detail (especially in very ambient halls), as well as giving the engineer the option to perform very subtle adjustments of the overall blend between instrumental sections after-the-fact. Some purists prefer simpler, more minimalist approaches, but it’s likely that the orchestral scores you hear in films have utilized spot mics to subtly augment the main stereo pair.

A variation of coincident mic'ing is M-S, or Mid-Side mic'ing. This was designed to both ensure mono compatibility and provide after-the-fact control over the width of the stereo image. An M-S setup replaces the Left and Right mics with a Mid (Mono, L+R) mic and a Side (L-R) mic. The Mid mic points straight ahead at the (center of the) sound source/stage- this is typically a Cardioid design though any pattern can be used. The Side mic is a Bidirectional pattern (Figure-8) pointed sideways, with its null point facing the sound source.

The Mid signal picks up the source (the entire sound stage) in Mono, while the Side mic picks up the difference between Left and Right (the extreme sides of the sound stage and ambience). The two signals are sent through a matrix, where the Side mic provides the stereo imaging. With the Side mic’s output all the way down, you have a pure mono recording with no phase issues; gradually mixing in more of the Side mic widens the image all the way up to full (natural) stereo (both mics at equal levels), and cranking the Side signal can even artificially widen the image. Mid-Side techniques can also allow for independent processing of the Mid and Side signals - you often see plugins that convert regular LR stereo recordings to MS for that purpose.

I’m just about out of room, but there’s one more technique I want to mention quickly and that's Binaural recording. This is kind of a variation of the near-coincident idea of placing the stereo mics where human ears would be, but it goes a step further: the mics are mounted in a dummy head, which approximates the density and interference a real human head has on the sound picked up by our ears. This technique doesn’t really translate to speaker playback, but in headphones it can produce some startlingly three-dimensional recordings. 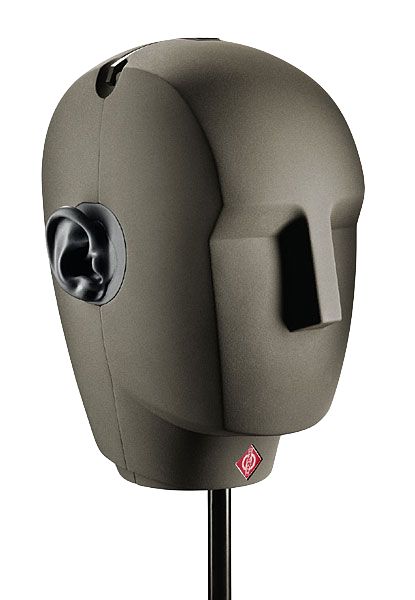 Obviously this was just a very brief look at stereo mic'ing, but for anyone who may be about to take on a stereo recording of a drum kit, piano, or small or large ensemble, hopefully this primer will have provided some useful information about the various options for true stereo recording.