Language
The Squarp Instruments Pyramid is a dedicated hardware sequencer with real-time MIDI effects and polyrhythmic capabilities. On pre-order, this lovely machine now has demo videos showing it in use.

The attractive-looking hardware sequencer from Squarp Instruments, Pyramid, has caused quite a stir since we first reported on it back in February of this year.

To get hold of a Pyramid you need to pre-order for €699 and shipping starts in until early June 2015. 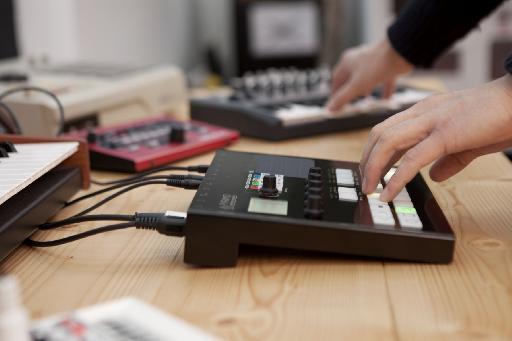 We can't wait to get hands-on with the Squarp Instrument Pyramid...

In the mean-time Squarp have released four videos showing off some of the cool features Pyramid can do. Here's a couple we particularly enjoyed and there's links at the end to the entire collection.

The final sequence contains six tracks, which are mostly playing drums. Each track has its own set of parameters, including time signature, length, zoom and midi channel, to create some polyrhythmy and polymetry.

Euclidean algorithm evenly generates distributed notes (fills) among a defined number of available slots (steps). The sequence created on this video contains 9 euclidean tracks. Each of them are 1 bar length or lower, but because the measure size differs, they shift against each other: the loop is ever-changing.

This video is an example of how to chain effects in the FX Manager, sequencing the DSI Mopho x4.

Each track can handle up to four chained up effects. As all effects are real-time processed, the recorded events will not be affected but the sound will change on the fly. In this video only one track is used, in LIVE mode exclusively (CHORD sub-mode). Its effect section contains two arpeggiators, one humanizer and one randomizer.

Watch all the Pyramid Sequencer videos on the Squarp YouTube Channel.