Language
In an interesting move in the music making industry, Splice has introduced a '˜rent to own' plan for Xfer Records Serum, one of the most popular synth plugins available. No strings attached!

To date, there's outright buying of plugins and software, subscribing to have access (Adobe and Microsoft are prime examples), but the concept of renting to own a software synth is a new one.

Sure, Cakewalk's Sonar is available as a kind of pay as you go with free updates for 12 months... but the idea of renting an individual synthesizer like Xfer Records Serum with no added interest or strings attached appears to be novel. And, it might just help prevent piracy, which in turn means software developers can continue making excellent tools for music makers and audio creatives.

Here's how the clever folks at Splice are presenting their new rent to own payment plan for Serum:

Splice has partnered up with Steve Duda and Xfer Records to present a revolutionary rent-to-own payment plan for the heavily popular waveform synth, Serum. In doing this Splice is setting a precedent as the first tech company to implement any kind of rent-to-own service which is sure to be the new industry standard.

Starting at $9.99 a month, users will get the full working version until the product is paid for, evening the playing field for producers everywhere to use the same synth that many of the top artists use every day. The plan lets you cancel whenever you need a break while saving your progress towards owning the entire product.

This is just the beginning of a promising future. Splice and Xfer Records will continue integrating additional cloud-based tools, offering the highest quality plugins helping to simplify the music creation process for hungry aspiring producers.

The mastermind behind Serum, Steve Duda, is best known for his work with co-producer deadmau5, while having an illustrious career in sound designer and production working with iconic artists such as Nine Inch Nails, Rob Zombie, Sugar Ray, A Perfect Circle and Tommy Lee. 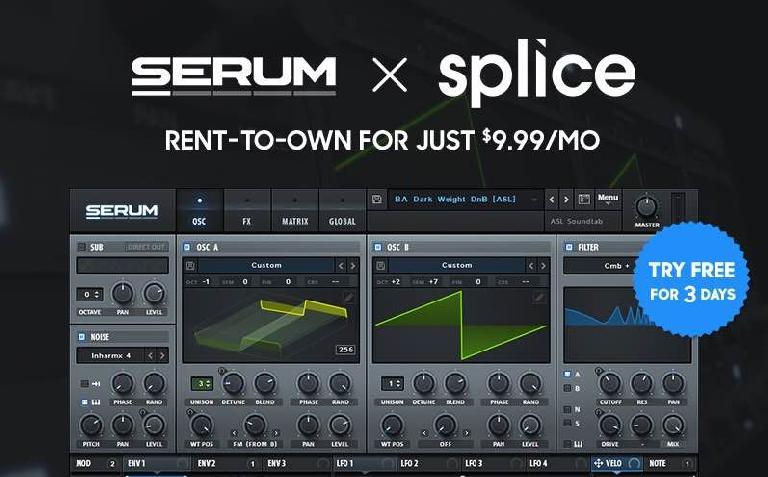 Splice is currently used by over 420,000 producers including deadmau5, Marshmello, Jauz, Dillon Francis and Flosstradamus. It houses one of the largest collections of over 1 million sounds, plug-ins, and presets, with exclusive artist packs from the likes of Carl Cox, deadmau5, Just Blaze, Lex Luger, Tiesto and more. Launched in 2014, Splice has raised over $7.25 million from various high profile investors including Tiesto, WME, Scooter Braun and Steve Angello, and has been praised by the likes of Bloomberg, Billboard, Verge, Complex, Tech Crunch, Huffington Post, The Verge, Creators Project and more.

Serum Rent To Own Overview