M/S processing is found on a range of software and hardware processors. But what is it used for? Joe Albano demystifies this sometimes misunderstood technique.

Mid-Side stereo (aka M-S stereo) is a specialized way of recording and/or processing a stereo audio signal. In the analog era, M-S processing was an important part of mastering for vinyl, and in the modern era it’s still a popular tool for mastering. Let’s take a brief look at how M-S works, and what its applications are. 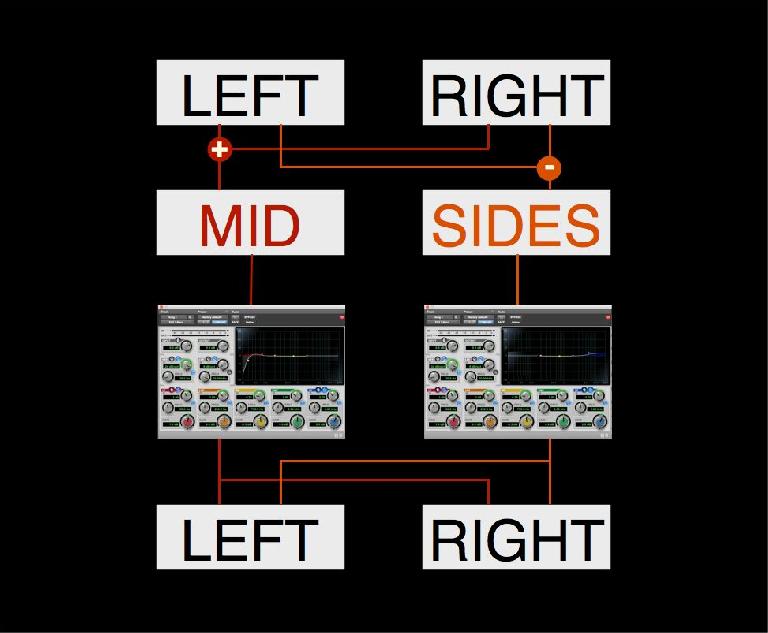 In the M-S version of a stereo signal—like a stereo mix—the Mid channel would include everything, with center-panned elements dominating, while the Side signal would contain only audio that’s different in the left and right channels. For a typical stereo mix, the Side would include instruments/voices/sounds panned primarily to one side or the other, and diffuse stereo components like reverb; the Side would not include center-panned elements of the mix—typically kick, snare, lead vocal, etc.

M-S signals can be created by recording them that way, or by processing a regular left-right stereo recording after the fact to derive the Mid and Side channels from it.

Besides being a processing tool, Mid-Side is also a stereo microphone technique. A Mid-Side recording utilizes two microphones in a specific configuration. A regular stereo recording is made with two mics in a standard stereo configuration like spaced omnis or XY, where one mic is positioned/pointed to pick up the left side and the other to pick up the right side, and both mics would normally have the same polar pattern (omni/bidirectional/cardioid). Mid-Side miking utilizes two mics with different polar patterns, as a coincident pair with a unique placement.

The main mic—the Mono mic—is pointed at the center of the source. This would most typically be a cardioid mic, and will pick up everything, in pure mono. The other mic is a bidirectional—Figure 8—mic, which picks up signals to the front and rear, and rejects sound at the sides. In M-S recording this mic points 90° off-axis (at a 90° angle to the mono mic), pointed to the sides of the source with its null point facing the source. This mic will pick up sound from both sides of the room, most prominently ambience—this, of course, is the Side mic. A sound wave hitting both front and back of the Side mic at more-or-less equal strength—like a signal at the center of the stage—will put equal but opposite pressure on the diaphragm, cancelling that signal out. So the Side mic rejects sound from the source, but sound from the sides—like ambience, which is diffuse and different at the left and right, and to some degree instruments/performers on the extreme sides of the stage—will not put equal pressure on the front and rear of the mic diaphragm, and will be picked up—the Side signal.

M-S recording offered provided a technical advantage back in the analog era. When recordings were transitioning from mono to stereo, mono compatibility was important. When a regular left-right stereo recording was collapsed to mono, phase cancellations between the channels—which might contribute in a positive way to stereo depth and image—could result in undesirable tonal colorations in mono. But an M-S recording can be collapsed to mono simply by killing the Side channel, and what’s left is a pure mono signal—from a single mic—with no unpleasant phase issues.

An M-S recording also offers control over the width of the stereo image. Starting off with just the Mid mono channel, if the Side channel is gradually added in, the stereo image gradually widens—at equal level, you get normal stereo.

Mid-Side stereo also has an important application in vinyl mastering.

For most of the classic (analog) era of recorded audio/music, the vinyl record was the primary medium for distribution to the public. As stereo recordings gradually supplanted mono recordings, the new stereo recordings had to be backward-compatible with mono turntables, playing both left and right in mono. To guarantee this compatibility, the stereo signal on vinyl is actually an M-S signal—this is still the case today.

Mid-Side on vinyl is usually referred to as Lateral-Vertical. The Mid channel is cut laterally—that channel corresponds to lateral—back and forth—motion of the stylus in the groove, just like older mono recordings. The Side signal is cut vertically—that channel corresponds to vertical—up and down—motion of the stylus in the groove. 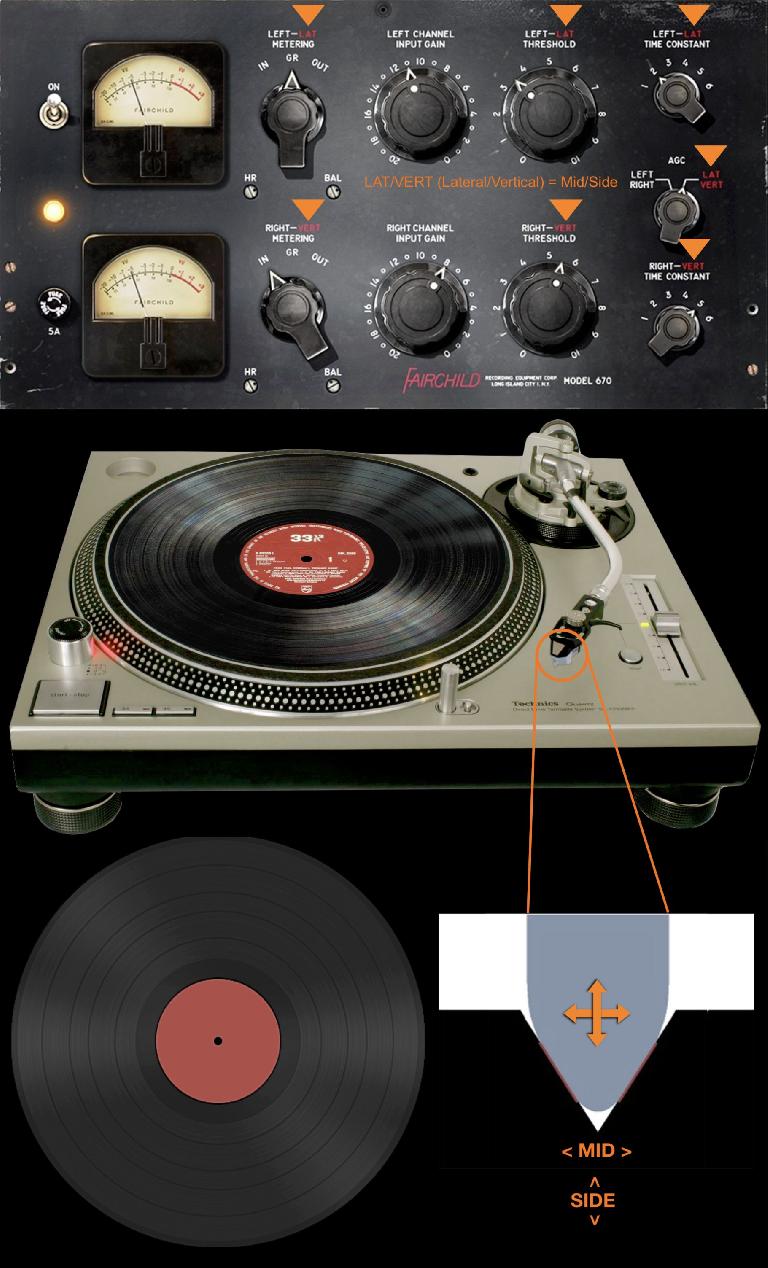 If a stereo recording is played on a mono turntable, the lateral motion would be the only signal picked up, but that’s the pure mono (Mid) signal, making the stereo groove 100% compatible with older players; stereo players will also pick up the vertical stylus movement, for full stereo playback—all phono preamps include the required MS->LR stereo decoder (along with standardized RIAA phono EQ).

But M-S stereo is more than just a method for guaranteeing mono compatibility and offering easy control over stereo width. Converting a left-right stereo signal to M-S allows the Mid and Side channels to be processed independently, and this allows for some useful processing techniques for stereo signals.

With a Mid-Side signal, elements in the center or at the sides of the stereo soundfield can be processed with some degree of independence. This can come in handy for stereo tracks like a full drum kit, where the kick and snare are typically panned center, with toms, hihats and other cymbals more to the sides. The most obvious application of M-S here would be the ability to change the width and balance of those elements. If the stereo drumkit is too wide, reducing the level of the Side will narrow the spread of the drums, without potential phase issues. If, say, the cymbals are not loud enough, reducing the level of the Mid will affect the level of the kick and snare relative to the wider-panned cymbals. More interestingly, if there’s ambience in the drum track, increasing the level of the Sides will make that ambience more prominent. But too much change—more than around 2-3 dB or so—may have a negative effect, so subtle tweaks are best.

But besides simple mid-side re-balancing tweaks, M-S also allows for independent processing—like EQ or compression—to be applied to the Mid and Side. Along with the mid-side balancing capability, this can be very useful in mastering, and M-S is often utilized for subtle problem solving and tweaks where the ability to target certain aspects of the signal—in the center or to the sides—can allow for a (limited) degree of more specific control when dealing with a finished stereo mix, with all the elements already printed in the stereo audio file.

M-S processing offers some useful tools for mastering. Since a finished mix will be a regular left-right stereo signal, to apply M-S processing the audio will have to be converted from L-R to M-S. Many plug-ins—especially those targeted to mastering applications, like iZotope’s Ozone—offer the option for L-R or M-S processing, when applicable. Some DAWs offer the ability to convert any L-R stereo signal to M-S—Logic’s Dual-Mono plug-in format lets any stereo plug-in process the left and right sides independently (it’s really two identical independent plug-ins in one), and the format also includes the option for M-S processing in place of left-right processing, with separate settings for the converted Mid and Side signals. Even if a plug-in or DAW has no built-in M-S capability, it’s always possible to convert a left-right stereo signal to M-S by duplicating the stereo track in multiple channel strips and applying the appropriate phase flips; but this is clunky, and it’s usually easy enough to find a free plug-in that will do the conversion more easily, like Goodhertz’s free Midside Matrix plug-in, available in all the usual formats. In mastering, M-S can be useful to tweak the width of the stereo image, as above—increasing the level of the Side above the level of the Mid can even provide an extra-wide stereo effect, though I’d be hesitant to do this, since it can negatively impact the mix if pushed too far—a gentle touch is best. Boosting the Side slightly (a dB or two) can also be done to emphasize wider-panned background parts in the mix, or to bring up the level of the reverb/ambience a bit, with a recording that might be just a little too dry. But again, subtlety is key.

Adjusting width and ambience of a mix

Applying (subtle) EQ independently to the Mid and Side channels can be very useful. For example, let’s say a mix includes some wide-panned cymbals and doubled guitars that need to be brightened up a little, but applying even a very small amount of overall EQ to the full mix brightens up an already-bright snare too much. By converting the mix to M-S, the EQ can be applied only to the Side signal, brightening up the guitars and cymbals (and the overall reverb/ambience as well), but the center-panned snare won’t be overly affected.

EQ applied to the full Stereo signal, then the same EQ to Side-only

Compression could also be applied just to the Mid or Side. You could add a little squeeze to just the Mid, where (even though the Mid channel includes everything) it would affect a center-panned snare and kick a little more than the other side-panned elements, allowing for a bit more drum compression without too strong an affect on the overall mix. Or compression could be added to just the sides, to add a small amount of thickness and push to the mix, without sacrificing the punch of the primary (center-panned) rhythm tracks.

When doing any kind of M-S processing, always keep in mind that it doesn’t provide complete isolation of mid and side signals, so don’t bring unrealistic expectations. For example, while in theory reducing the Mid channel could remove a vocal, that would only work if everything else was panned to the sides, at least to some degree, and the mix was relatively dry—in the real world, the likely result would be accidental removal of other centered elements—like kick and snare—and a ghostly vocal echo from the reverb applied to the voice, which would be present in the Side channel.

But when utilized for subtle adjustments to a stereo track or mix, Mid-Side processing can be a very useful tool in a mixer or mastering engineer’s toolbox, once you get a handle on it.

Learn everything you need to know about mixing and audio processing: https://ask.audio/academy?nleloc=category/audio/topic/mixing