Language
Daft Punk's Random Access Memories was arguably one of the albums of the summer. In this tutorial, G. W. Childs explores how to emulate their vocoding style using Ableton Live and kHS ONE.

Daft Punk's long awaited Random Access Memories has just by its very release created a very interesting argument on what people wanted, or haven't wanted from the highly anticipated album. Personally, I've very much enjoyed the performances production quality, and the songs themselves. I've found that listening to the album, as intended, by going through the songs in order, that the album has a really nice progression from start to finish.

One defining attribute of the album, whether you like it or not, would definitely be the vocoder/talk box usage that appears like a calling card, in some form, at different spots during many of the songs. As the album starts, the vocals are all vocoded. But, as the album progresses, the vocoders are pulled back, and the album opens up and becomes much more human.

Even in the earliest portion of the album though, the vocoded vocals are still very expressive and easy to understand. Intelligibility is always an issue when it comes to vocals modulating synthesizers. So, it was pretty gutsy to have the lead vocals on '˜Game of Love' be entirely vocoded. The song has something to say, and if you've worked with vocoders at all, you can tell that they spent a lot of time dialing in the sound so that it sounds good, but is still expressive and understandable. In fact, if you watch any of the interviews at randomaccessmemories.com, Giorgio Moroder even mentions how much time they spent screwing around with vocoders.

Daft Punk are know for using talk boxes and vocoders. And, in truth, I have no idea what specific vocoder, or talk box were used on any of the songs during Random Access Memories. But, if you're interested, I can help you get close. So, let's try making some random access memories of our own in Ableton Live.

Note: Keep in mind, what's being done with the vocoder on Random Access Memories isn't rocket science. It's actually pretty simple. But, it does take some fine tuning! Oh, and another important factor is recording your voice in as clean of an environment as possible, and definitely use a gate. Vocoders will use background noise as a trail on your voice, and it takes away from the sound we're trying to attain here. So, jump in the closet, if need be!

In order for us to get that Daft Punk precision and intelligibility on our vocoded track, we need to dive in to a few functions on the vocoder within Ableton Live that will allow us to even come close to the sound. The most important function in doing this would be the amount of bands that you've allotted for the Vocoder in Ableton Live to use. Technically, for the highest intelligibility, you'd go with all of the bands available. This being 40. But, keep in mind, Daft Punk are most likely using a real analog vocoder, or talk box (they have that kind of scratch), so I found that by cutting back slightly on the amount of bands that I was using, to 32 actually kept things very understandable, but didn't sound too '˜new'. 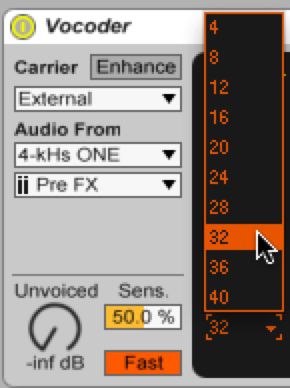 The other big factor, I felt, was setting the filter behavior to Retro. This filter type is a little louder and tends to allow some of the higher frequencies needed for that extra bit of intelligibility. While you're doing this, you may also want to limit the Frequency range of the vocoder. This helps dial in where the vocal part is sitting. So, by limiting the lower filter band frequencies to around 257 Hz, you ensure that the low frequencies of your carrier wave won't compete with your bass, kick drum, etc. And, by limiting your upper filter band frequencies, you're less likely to get any ugly vocoder sibilance, and those retro leads, Rhodes and so on will have a nice place in the mix. I set mine to 8.31 kHz so that my hi-hats and the vocals would both work together nicely.

The next important factor would definitely be the carrier, or synth that you're going to have your voice modulate. I chose the kHs One from Kilo Hearts to be my carrier. It already has that nice retro sound to begin with, it's light on my aging laptop processor, and you can shape the oscillator waveform till you get something that really sounds right.

Don't worry if you don't have this synth! Simply use a subtractive synth that has a basic sawtooth waveform, and enable and disable features as they apply to the synth that you're using.

The main elements of your synth really is the sawtooth waveform, to start off with. And, rather than beefing up the sawtooth with dissonance, and so on, go completely clean. It should sound something like this...

See? It's the initialized patch that we've all been quick to build out of, for years! Sounds like a video game.

Aside from the simple sawtooth waveform, there are a few features that I would enable. Not so much for sound, but for the playability of your voice. Limiting your polyphony to 1 note would be a great idea. This makes it easy to create complex melodies that make your voice jump around a bit. And, there's no chance of note overlap, which will make your retro vocoder, which is supposed to sound like it's out of the late 70s, sound more like it came out of the 90s. And, nobody wants the 90s. 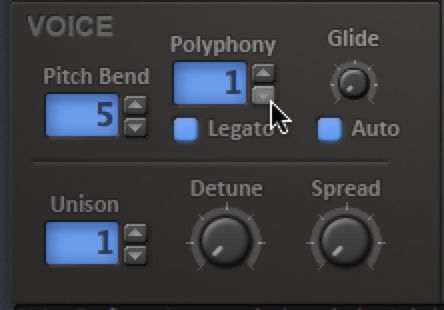 Finally, I would highly suggest setting your carrier synth up with some Glide action. This can be found on native devices to Live. Simpler has it, Analog, and so on. This makes it where note overlap will cause pitch bending, similar to using the pitch bend on your MIDI controller (which I would also recommend). 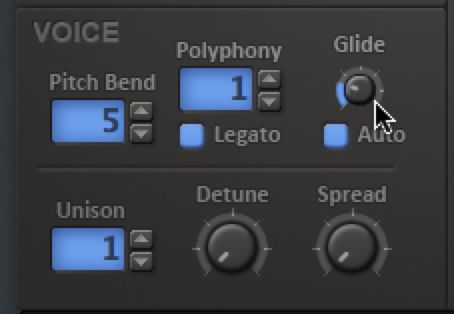 As I mentioned earlier, it's not difficult to get close to that Daft Punk, disco sound. But, it can be tricky to nail it. It really takes a little time to get the nuances and polish in. Here's my finished work below. Granted, it's not exact. But, you get an idea of how it's being done. If you have access to a talk box, I would love to hear if you were able to get even closer!