Some Points Of Potential Confusion Regarding Modern Mastering Level Practices

Mastering for all of today's media and streaming services can sometimes seem like a maze. Luckily, Joe Albano is on hand to guide you through it...

By now most people are aware of the waning of the Loudness War and the trend towards more reasonable average levels for modern masters. This trend has been driven both by artists and producers concerned with the quality of their recordings, and the rise of Loudness Normalization practices by most of the major music streaming services, which enforce maximum average levels that preserve greater headroom, removing the main rationale for loudness maximizing and the inevitable reduction in audio quality that practice has contributed to for many years.

But even those who are versed in the basic concepts and practices of Loudness Normalization still often find themselves with questions and concerns over specifics and implementation. In this article I’ll briefly address a few common questions and concerns about current Loudness Normalization practices, and its implementation out in the real world.

First, I want to very briefly go over the basics of Loudness Normalization. For years, the overall loudness level of songs was set based on the loudest peaks in the audio. Engineers used brickwall limiters—originally intended to simply prevent digital overloads—to reduce the levels of transient peaks drastically, allowing the lower average level of the music—which actually determines how loud a song sounds to us—to be raised to much greater levels then ever before.

But transient peaks were typically reduced by so much that the music was left without much dynamic range, and—without those strong transient impacts—a lack of punch and musical dynamics, as a result of drastically-reduced peak-to-average levels (headroom).

Along with a similar movement in the broadcast industry (to lower the level of loud commercials), the industry gradually adopted new measurements and scales—the Loudness Unit and LUFS scale—that factored in human loudness perception more effectively. And they established recommended maximum average levels, as measured with these new tools, with the goal of making a playlist of songs have consistent loudness from song to song, while still preserving plenty of transient headroom, preserving all the punch and musical dynamics that were being lost to Loudness Maximizing. 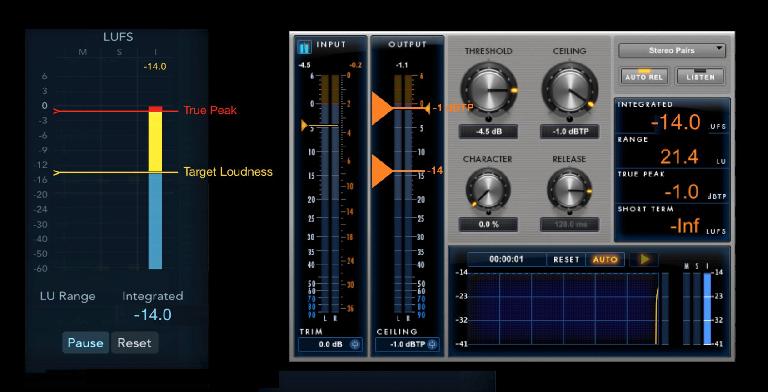 This new approach is Loudness Normalizing. The AES has published recommended maximum average levels, and most streaming services also enforce maximum average levels—though often a couple dB higher than the AES’s suggestions, those services’ enforced standards have been a very big part of the trend towards more reasonable levels in mastering. You can read more about the basic details in some other articles:

Here are a few points of potential confusion that often come up regarding current Loudness Normalization practice.

People are sometimes confused by what exactly a LUFS level reading is measuring. Unlike peak meters and even traditional average level meters—like the classic VU meter—a LUFS meter does not indicate the single loudest average level. Instead the reading is made over the course of an entire selection—a full song, in the case of music—and it includes additional factors that relate to actual loudness perception. For that reason, it’s important to reset a LUFS meter and then play through the entire song to get a valid LUFS Integrated level reading, which would correspond to the loudness measurements made by the streaming services that are used to limit the average playback level of your song(s). Getting a proper reading and then using that reading to set the overall loudness level of the song will help in achieving consistent loudness for your songs when they’re heard streaming in playlists.

It’s also important to realize that—unlike most Loudness Maximizers—a typical LUFS meter usually only provides a readout—the engineer then has to go in, set the final level to conform to the appropriate maximum loudness standard, and then, ideally, play through the full song again to confirm the proper level.

Is all brickwall limiting bad?

Despite its overuse for many years, some amount of brickwall limiting can be applied and will usually not noticeably have a negative effect on the music. Up to around 6 dB or so of transient reduction is generally considered to be mostly transparent, and in fact you’ll likely be applying some degree of limiting even when setting average loudness level to the current standards (-14 to -16 LUFS) in use. Compared with the degree of transient limiting that’s been in common use—which can be twice as much as that (or more!), the music should retain its punch and dynamics with a little bit of transient reduction, as long as its done cleanly, with quality software limiters. 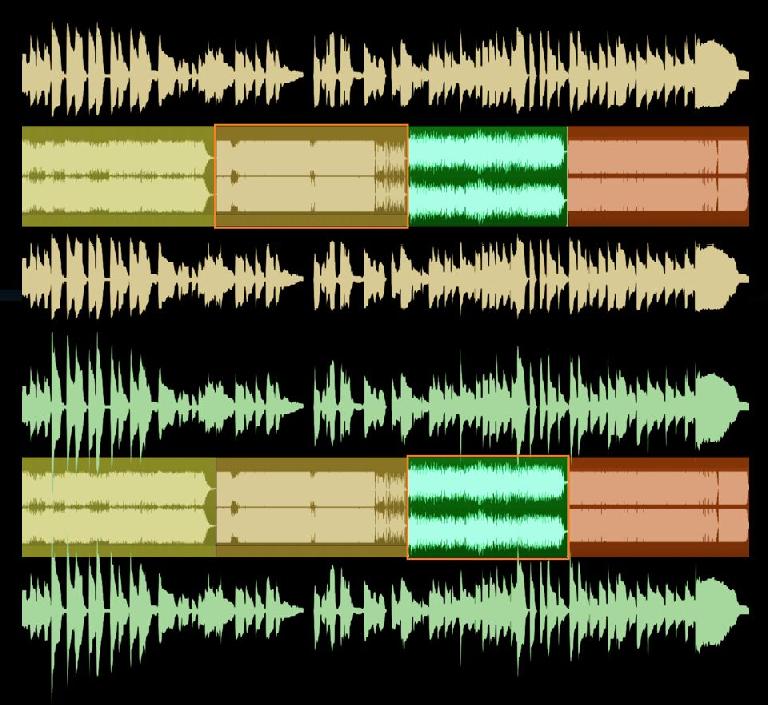 When maximum average loudness limits were first being set many people were afraid that the streaming services would enforce them with the use of heavy-handed compression and limiting—after all, that’s what analog radio has been doing for years and years. However, since one of the goals of Loudness Normalization is to preserve headroom, all that’s done is that the song’s average level is measured by the service, and then the overall playback level is simply reduced so it doesn’t exceed the maximum average level permitted—with no dynamics processing of any kind. This means that loud heavily limited masters won’t play back louder than quieter modern masters, but the sound and dynamics should be preserved in all cases.

However, there still may be some circumstances where a song may bump up against a brickwall limiter. A service still needs to avoid digital peak overloads, so if a song’s level is set by its average level measurement, and that song has strong peaks, those peaks may be shaved off—hopefully transparently—by a peak limiter. The situation where this would happen might be if the average level of a master with strong peaks is much lower than the maximum average level, and the service brings it up to the standard level. If you make sure to create a master with an average level close to the standard that you know will be applied, and apply your own peak limiting (as per the new True Peak standard, see below), then even if the service’s standard doesn't allow for as much headroom as you’d prefer, at least any limiting applied will remain under your control.

Level Down And Level Up?

The last point brings up another question. Of course streaming services turn down the overall playback level for  songs whose average (LUFS) level exceeds their maximum average level standard, but will they turn up the level of a song whose average level is lower than their maximum average level? If the goal is to have all songs play at more-or-less the same average level, then this would seem to be the way to achieve that, but it’s not clear that all services do bring up the level of quieter masters. As far as I could determine (from their published documentation), Spotify and Apple definitely do, but I’m not certain about other streaming platforms. 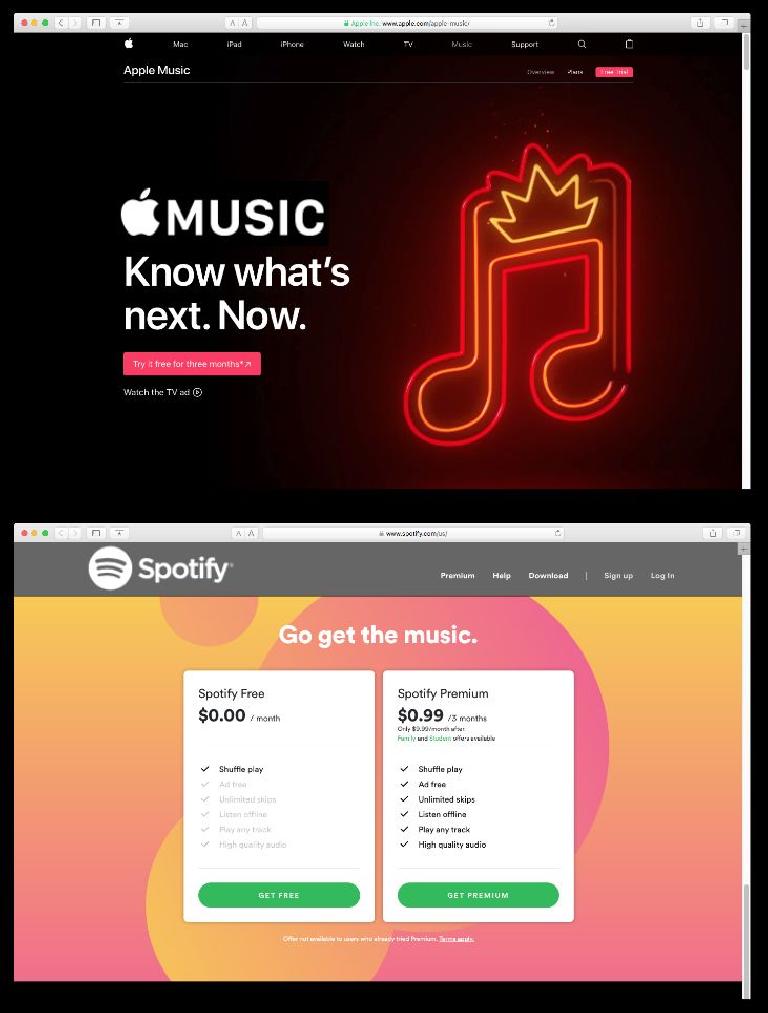 The best thing to do is probably to create a master that’s at or just a hair above the maximum level specified by the service—that should insure that even though your track may be (transparently) lowered very slightly, it won’t end up being distractingly softer than other songs in a mixed playlist.

One Level For All?

Will a song play back at exactly the same level on all services? Not necessarily—the services use different tools for measuring average loudness for enforcement, so there may be some variation in playback level, even if the maximum average level specified is the same.

If an album or collection of songs is submitted for streaming, and that collection has some louder songs and some much quieter songs, Loudness Normalization applied on a per song basis may mess up the relative levels of the songs, at times making a few soft songs too loud or a few loud songs too soft. For that reason, some streaming services include an option for “Album Normalization”, which preserves the relative overall levels of all the songs in the collection, usually basing that playback level on the average loudness level of the loudest song(s). This is good, but apparently different services use different methods for doing this, and reports suggest that not all are equally effective, so if you’re uploading an album for streaming, a little due diligence would be in order, to determine (a) if Album Normalization is available, and (b) how well it works for your particular collection of songs.

The other component of modern level standards is the True Peak measurement. This is a traditional peak level measurement, intended to avoid digital clipping (the original intent of brickwall limiting). True Peak meters provide a reading that factors in an artifact of Digital-To-Analog Conversion that goes undetected by regular peak meters, avoiding around a dB or so of potential overload in playback. A True Peak meter could be used even when preparing a Loudness Maximized track (say, for CD), where the maximum peak level is typically set to around -0.3 dBfs or so, but most modern loudness standards today also specify (and enforce) a True Peak maximum of -1dBTP (or even -2dBTP), so it might be better to stick to that slightly lower maximum peak level for everything.

While the implementation of Loudness Normalization has been a big plus in the gradual waning of the Loudness War and the transition to more dynamic, better-sounding masters, there are still areas of confusion, and aspects of implementation that could be improved upon. It would be worthwhile to keep an eye on these practices and standards, as they will likely impact any music you put out there for public consumption.

Learn everything you need to know about mixing and mastering: https://ask.audio/academy?nleloc=category/audio/topic/mastering