Clip gain tools can be a more effective way to control specific changes in volume than using automation or compression. Joe Albano breaks down the advantages to its use in Pro Tools.

Setting levels track-by-track for a mix with the virtual console’s Channel Faders is Mixing 101, and using traditional Track Automation to make dynamic changes to those faders’ levels follows pretty close behind. But there are more ways to affect the level of parts, both static and dynamic, and one of those is Clip Gain.

Clip Gain—also known as Region Gain—is a feature that allows the level of the audio on a track to be changed in addition to the level set with the Channel Fader. Of course, there are other places this can be done as well—many plug-ins feature level controls, including dedicated Gain or Trim plug-ins, but Clip Gain offers some unique advantages.

All the Gain’s a Stage

To understand how the various gain controls in a virtual mixer interact, you have to be familiar with the concept of Gain-Staging. This refers to the practice of adjusting the gain of a signal at various points as it travels through the channel strip from its source—the audio regions on the track—through the plug-ins on that track, and eventually through the track’s Channel Fader, where it’s then routed (through the panner) to the main mix bus. Gain-Staging is done to make sure that at all points in that path, the signal is at optimal level, so it won’t overload unintentionally, and so it will be at a proper level to drive level-sensitive effects like dynamics and distortion processors.

A common newbie mistake is to immediately reach for the Channel Fader whenever a level adjustment needs to be made, but that’s the last stop for that signal in the mixer—often those adjustments need to be made earlier to maintain proper Gain-Staging. One common complaint is frequently heard when a recording is made at a relatively low level: gain may be boosted with the Channel Fader until the level is good in the mix, but this doesn’t make the wave in the region any larger, sometimes making editing difficult despite having a suitable mix level.

This is where Clip Gain comes in. Most DAWs include this feature is some form—for example, in Logic, it’s a Region Parameter, accessed in the Inspector on a per-region basis. I’m looking at Pro Tools’ method because it’s a particularly full-featured implementation. Clip Gain (again, Region Gain in some other DAWs) is applied at the beginning of the signal path for a track—within individual audio Clips on the timeline.

This is the first advantage it provides: while Track Automation is a continuous set of level adjustments for the Track as a whole, Clip Gain is tied to individual clips (regions). By dividing a long clip/region into smaller ones, individual gain settings can be quickly and easily applied to each, and those will always travel with the clip when it’s edited. This is often faster than enabling and drawing Automation, and it’s perfect for gain adjustments that may need to be applied to specific phrases, like different takes in a comped track.

This is especially useful if a section of music is re-used or flown in—copied and pasted—to other parts of the arrangement, making sure that the tweaked level of any stray notes will be maintained without having to activate Automation and copy or re-do Track-based Automation curves.

Engineers and mixers familiar with analog consoles will realize that Clip Gain can be used the way the Trim control in each channel strip is in an analog mixer—to set the level of recordings that are either too low or too hot before they hit the rest of the channel’s processing, again, insuring proper gain-staging at the beginning of the signal path.

In a DAW, there’s another big advantage to Clip Gain. Unlike adjustments made with the Channel Fader, tweaking Clip Gain (usually) affects the visual size of the wave shown in the clips/regions. So, in my earlier example of a low-level recording that remained difficult to see and edit even though the level was cranked with the Channel Fader, when that level boost is made with Clip Gain the wave display for that region will get appropriately larger as well, facilitating visual editing. For many people this is one of the biggest advantages of using the feature. 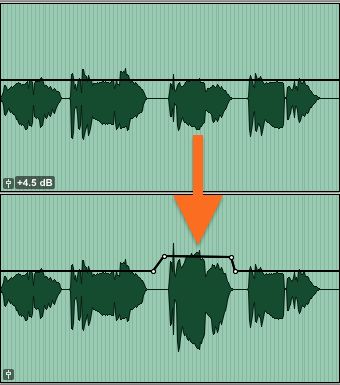 Clip Gain affects the size of the wave

This visual aspect of using Clip Gain may also be appealing to people who choose to use it instead of regular Track Automation. Unless they plan to manually enter the level changes in realtime (riding gain in the Automation’s Write, Touch or Latch mode), Clip Gain provides a potential alternative, especially for the kind of level tweaks that lend themselves to sectional adjustment (as I described above).

Of course, in normal mixing applications, both Clip Gain and regular Channel Fader Gain/Automation will be used, for different purposes—Clip Gain to fix recorded levels and gain-stage the signal into the insert/fx section, and Channel Fader gain for setting the mix levels of the various tracks against other tracks in the arrangement.

Another reason I chose to look at Pro Tools’ implementation of Clip Gain is because it offers an option that some others don’t—dynamic Clip Gain. Within a clip/region, the Clip Gain setting can be a static level—like Logic’s Region Inspector settings—but it can also include multiple nodes, for changing Clip Gain levels (see Fig 3 above). In effect, this is dynamic automation, just like the regular Track-based Automation, but implemented within each Clip, at the beginning of the signal path. This automates the audio level before it gets to the Channel Fader and Track Automation, which can also be active. 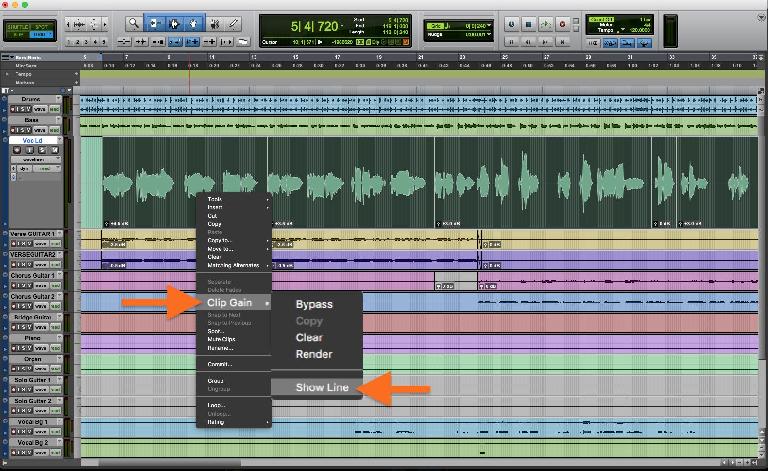 Dynamic Clip Gain can be very useful for certain situations—for example, a vocal recording where some words are dropped and others jump out a bit. Instead of relying on compression, which may not always be desirable, Clip Gain can be used to smooth out levels prior to subsequent processing, without having to cut the clip/region up into too many pieces.

Keep in mind that since Clip Gain is applied prior to any plug-in processing, it will affect the sound from any level-based processors, like Gates, Compressors, and Amp Sims (or other distortion devices). It’s important to keep that in mind if you decide to use Clip Gain on regions of a mix already in progress, where plug-in settings like Threshold and Amp Drive were already dialed up based on the level of the original recording before Clip Gain was used, those settings may have to be re-tweaked. Or, you could just tweak the gain after those effects, with plug-in i/o, Trim inserts, or traditional Channel Fader Gain/Automation—after all, that’s what Gain-Staging is all about, making level adjustments at the right places in the signal path.

It’s easy to forget about Clip Gain—unlike the Channel Faders, it’s often an almost-invisible setting—but whether it’s a static or dynamic implementation, it can be extremely useful for many common mixing situations. If you’ve never explored your DAW’s version of this feature, it’s definitely worth taking the time to get familiar with both the options it provides and the best ways to make use of them.

Learn Pro Tools, the industry-standard DAW for producers and engineers, in the AskAudio Academy with our Pro Tools courses.