Setting Up and Using VCAs in PreSonus Studio One

Language
VCA (voltage controlled amplifier) channel gain controls have made their way over from analog consoles into PreSonus' Studio One. Here's how to set them up and take advantage of their features.

The Studio One 3.2 update now includes VCA channels in its arsenal. These are great to use when you want to group and link tracks together but not sum them to a bus channel. They are a jump back to how analog consoles worked, but they worked there for a reason. Let’s take a look at how to set these up and how they can help you with your next track.

What is a VCA Channel?

VCAs are channels used in analog consoles, and the concept has been moved across into the digital domain. VCA stands for Voltage Controlled Amplifier. On a console, this is a channel gain control that can be adjusted by varying the DC voltage on the input. This made it possible to move a collection of faders together, maintaining their offsets by the movement of this single VCA fader. So the same concept applies with VCAs in the digital domain. Obviously, they’re not controlled by voltage like the analog version. But ultimately they work very well, as opposed to routing tracks to a bus channel, where the tracks are summed at the bus. This has its benefits, but let’s focus on VCAs and their benefits.

It’s pretty easy to add a VCA channel. Open up the Mix Console with F3, then right click on any track and choose Add VCA. 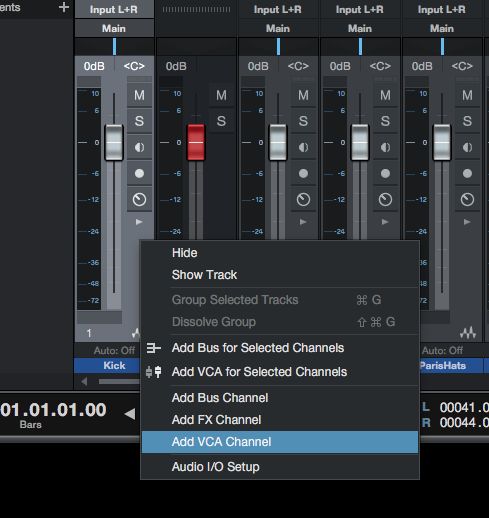 This adds the VCA channel in the mix console. And they are quite easy to distinguish from the other tracks as they have a red colored fader pot.

If you want to route a track to a VCA, just click on the grey box beneath the fader, and this will show you the VCAs you can route it to. So this grey box is essentially the VCA assigner on the track. 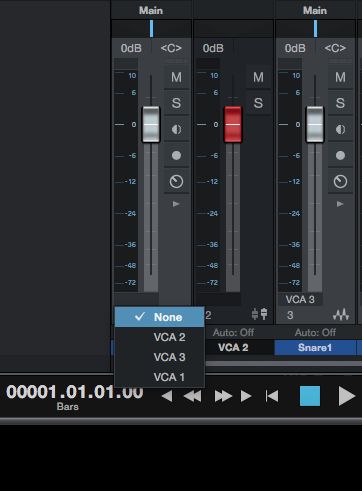 Sending Tracks to a VCA Channel

But I find it easier to use the following method to assign tracks to VCAs. To send selected tracks to a VCA channel, what you need to do is first select the track, then right click on one of the tracks and choose ‘Add VCA for Selected Tracks.' 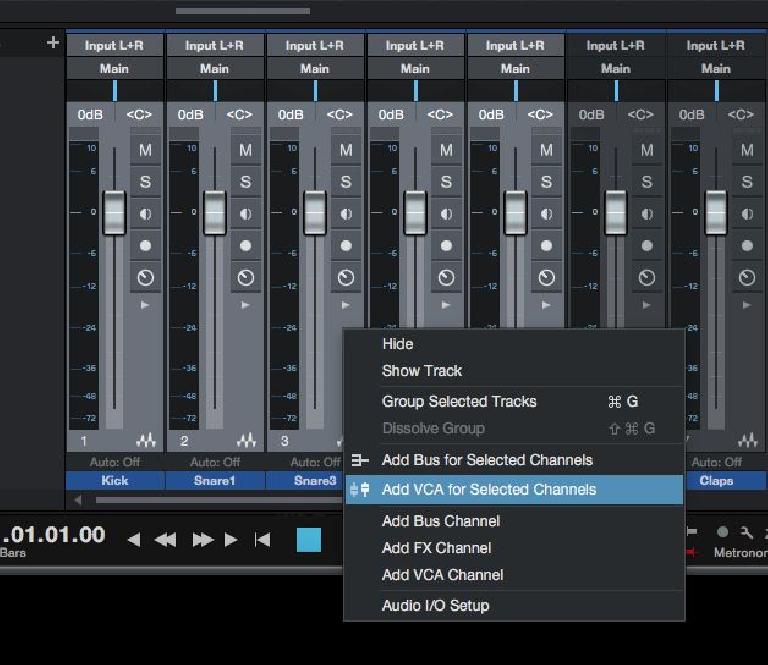 Now these tracks are routed to the VCA, so you don’t have to go and assign each one.

Now, when you start building up quite a few VCAs in your song, it can get complicated figuring out what tracks are going to each VCA. Hopefully, if you’ve named your tracks and VCAs accordingly this should make things clearer, but often it’s very easy to have tracks with arbitrary names, and the same habit goes for the VCAs. You know how it is. This is where the VCA Target comes in handy. At the top of the VCA, you can click on the target area. 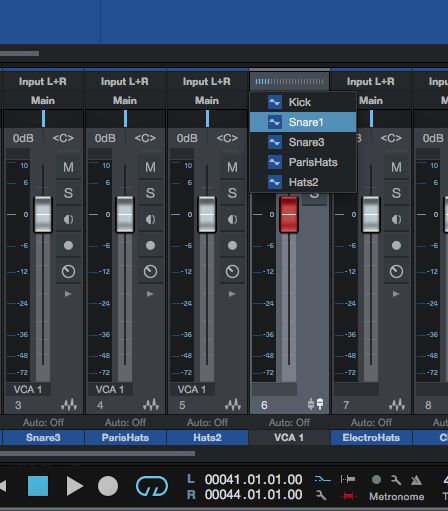 This will list all the tracks assigned to the VCA, and if you click on one of these tracks in the list, it’ll jump you to this track in the mix console. Plus when it jumps you to the track it expands the Inserts section if you need to go in and make some changes there.

Let’s see how these VCAs work now. Bring the VCA volume fader down and notice how it offsets the volume for the other tracks in the VCA group. So this is where they come in handy. You can create some VCA stems, for example, you could have Drums, Guitar, Vocal and Percussion VCAs. And if you wanted to adjust the level of let’s say the drums and guitars you can go to the respective VCA and adjust it there, offsetting the other tracks in the VCA. But these tracks won’t be summed; they still retain the same output chain. They pass through the VCA and aren’t processed at all here. 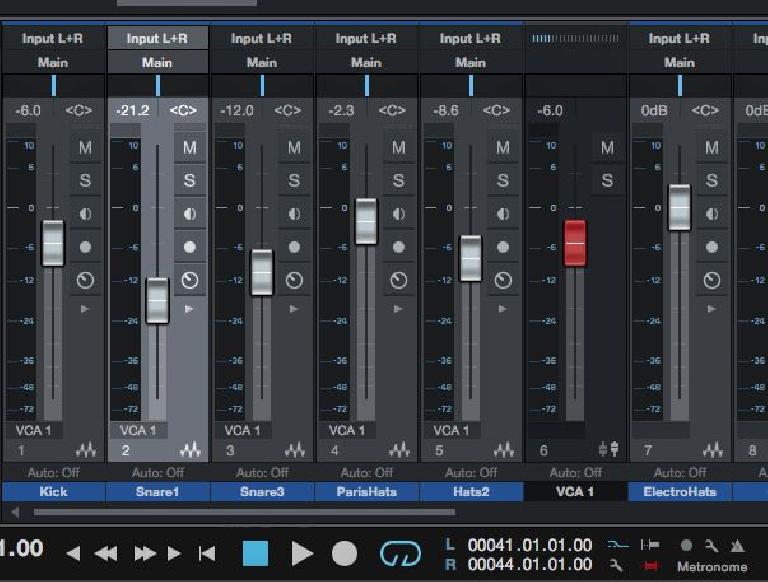 Also included on VCA channels are Mute and Solo controls.

VCAs to the Right

Another way of neatening up VCAs in your mix is to set it up so that the VCAs sit to the right-hand side on the Mix Console. To do this click on the Wrench Icon to the left of the mix console. This is under the I/O box window. Now tick ‘Keep VCA channels to the right’. You’ll notice how all the VCA are moved to the right of the mix console just before the Main Out. 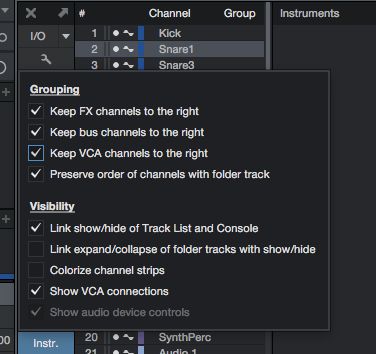 It makes sense to use it this way if you are, for example, creating stem VCA faders for your mix. You can mix your song, and then at the end just move to the right on your Mix Console and make some final tweaks to the VCAs if needed.

Another way of working with VCA channels is with Folders. If you pack your tracks to a folder, you can then assign this folder to a VCA Channel.

So let’s say I’ve packed my drums to a folder. Then on the Groups Box, I can choose to ‘Add a VCA Channel’ for this folder. 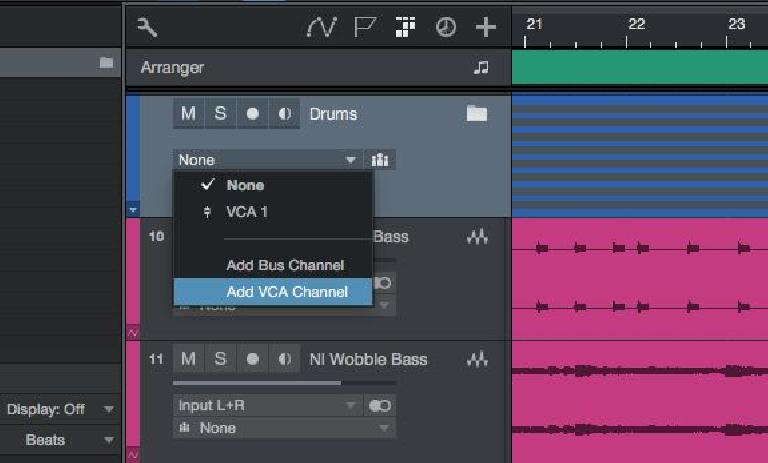 Now when you go to the Mix Console, you’ll see the Drums VCA Folder, plus a folder icon on it indicating that it’s a folder track.

What you can also do is link the expanding/collapsing of the folder to this VCA. Click on the Wrench Icon again and tick ‘link expand/collapse of folder tracks with show/hide’ under the Visibility section. 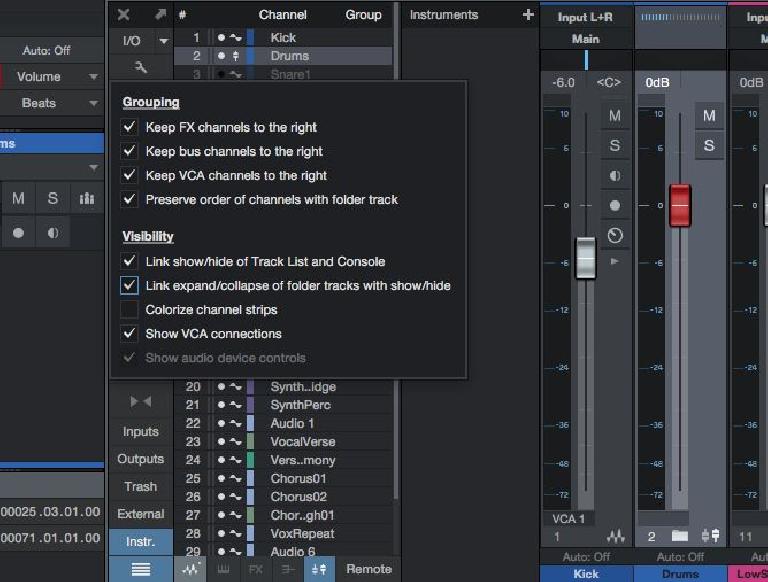 When you click on the folder icon on the track or the VCA channel in the Mix Console, it will either expand to show the tracks or collapse it to hide the tracks. This is a great way to neaten up your mix console, especially if your project has quite a heavy track count.

So VCAs really come in handy when managing the levels of specific groups of tracks, instead of being summed by a bus channel. Plus if you’re packing your tracks to folders and then assigning them to a VCA, then this is a great way to manage how you see your tracks in the Arrange and Mix Console. You can choose to show tracks when needed and then collapse them to just the folder to keep things nice and tidy in your song.