Setting Goals for Your Music

Language
Setting goals for your musical journey are every bit as important as setting goals in everyday life. G. W. Childs examines the finer points involved in establishing goals, milestones and more.

Almost everyone, when you corner them, will tell you that music is something they would love to do. They'd either be a singer, guitarist, pianist, or whatever their imaginations let them see themselves as during a pipe dream. However, only a few people ever stand up and say, “I'm going to do this!” It could be a fear of the unknown, it could be a case of lacking passion. Or, it may be that there's another focus. Ultimately, it doesn't matter because you're reading this now, and you, obviously, have stood up and said I'm doing this. Or, you've been doing this for a while...

However, whether you're new to music, or you've been in it for a while, you have to admit that knowing where you're going with it seems to really help!

While music is definitely an art form, once you start gigging, scoring, jingle-writing, etc. Well, it becomes a business. And, with every business, there must be a business plan. With that being said, have you started a business plan for yourself, or even simpler, just a list of goals, or milestones?

Personally, I like to employ both goals and milestones, as they create an even greater sense of accomplishment, in my opinion. Plus, I feel that by differentiating between the two, I keep a stronger momentum going.

So, what's the difference? Where goals are concerned, I'll break these down in to long-term and short-term goals.

Short-term goals for my musical life tend to be things like:

These can also be used for your daily life, too:

Personally, I like to clump the mundane and the musical together, as it makes me feel productive throughout the day.

Long-term goals tend to be a little more heavy handed, and can seem like milestones at times. But, there is a slight difference. Long terms goals for music tend to be things like:

As you can see, long term goals are more like grouping channels in a DAW. They are one goal completed that was made up of several smaller goals. You can also use this outside of musical life, too. For example, if you got arrested for being drunk and disorderly, you may have been given community service as a penalty. The process of completing community service can take weeks. And, because it's made up of several days of work, completing community service would be a long term goal! [Ed's Note: We hope G. W. isn't talking from experience about drunk or disorderly!] 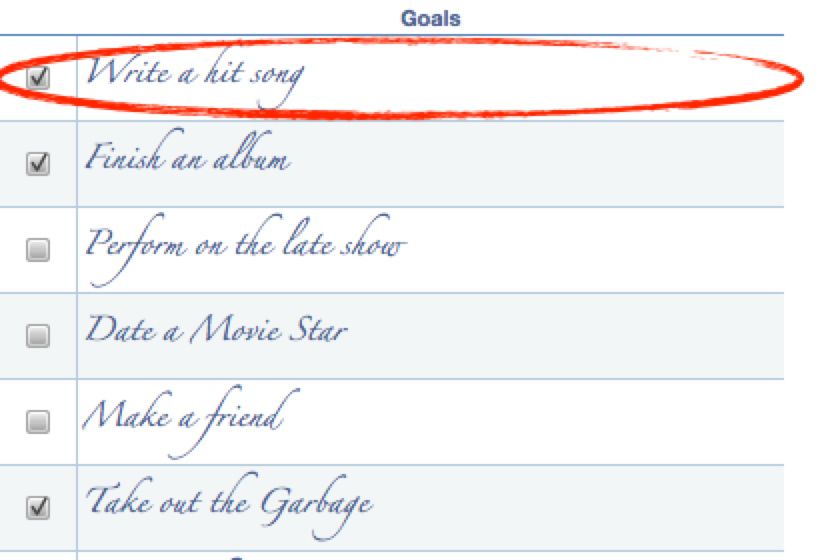 Setting goals for your musical journey are every bit as important as setting goals in everyday life.

My first personal, or career milestone was actually to get signed to a record label. Keep in mind, this was back when record labels still had some meaning. However, if I was starting over again, publishing an album would have been my first career milestone. Normally, an album would be a long term goal. But, because the first album marked a serious progression from someone noodling around, to someone with a complete product to sell, this took me from being someone sitting on the sidelines hiding my music, to a businessman with a product.

In other words, it marked a moment of graduation from noodler to published artist. And, don't let anyone tell you differently- Even if you're publishing the album yourself, once it's completed, it's a moment of career evolution. You now have a product! It doesn't matter if you're on a label anymore. If you promote it, and it sells... Well, money talks, right?

Now, after the first album, in my opinion, the next album will not be a career milestone, it's a long term goal. Finding the next milestone should be something along the lines of the next step in your career progression. If you've never toured before, that's a career milestone. If you've never had your music on a television show, or in a movie, or in a video game- Those are all career milestones... The first time they happen. From there on, it serves your mind better to think of them as regular occurrences, because you've graduated to this level of reality now.

Milestones can also be used during a long-term goal. And, these are great ways to keep yourself going and hold yourself accountable. For example: You can set a milestone of writing three songs during the writing phase of an album for 'Milestone 1.' Once you've completed all the remaining album writing milestones, you've completed a long-term goal of writing an album. Or, you could say that you've finished Milestone 1 of the album- Writing. Now, it's time for the production milestone.

These are just a few examples of project milestones. And, I would highly advise utilizing some concept of milestones as they have been utilized with serious success by companies making movies, video games, and even individuals achieving serious financial success.

These are just examples. And, the words like 'milestones' and 'goals' can easily be substituted for other words, if you like. The main thing is that you understand the concept of career, personal and project mapping. It's even handy, at the beginning of your new music career to map these milestones, short-term goals, and long-term goals at the very beginning. This is a great way of telling your sub-conscious mind (which communicates better through diagrams, words, pictures and symbols) that this is where you want to go. And, it also serves one other important function- It gives you something to look forward to and work towards that is more realistic than, “I want to be a star”.

It's funny, I've heard several interviews with several successful people. It's funny how many of them miss their days at the beginning of their journey, working in basements, working on their first business plan, writing their first songs. So, start seeing this as the beginning of your journey, and map out the life, career and fame that you want. After all, if you're in the middle, or even the beginning, you're technically in the fun part!