Serato DJ from the Point of View of a Twitch User

Language
The roll out of Serato DJ for mixers other than Pioneer DDJ-SX has been slow and steady. In this article Tadhg Leonard explores its integration with the Novation Twitch.

Even though Serato DJ was launched in November of last year, it was initially only made available to owners of the Pioneer DDJ-SX controller. However, slowly but surely, Serato started to roll out compatibility to controllers originally only supported by ITCH. In August, the Novation Twitch users among us finally got the chance to see what all the fuss was about. So what extra benefits does Serato DJ bring to the Twitch user that were non-existent in ITCH. Let's find out.

The first change you may notice is the difference in the interface layout between DJ and ITCH. From pressing the View button on top left of the Twitch controller continuously, you will see that you can have your tracks waveforms play vertically as well as horizontally, something that ITCH didn't offer. The main advantage of this is that more space is left for cue, loop and track info. Another nifty feature is that you can now toggle through the Recording, FX and SP-6 Sample Player windows by holding down Shift on Twitch as you press the View Button.

Using the Scroll area on Twitch to interact with the Library section in DJ remains pretty much the same as to how it was in ITCH. 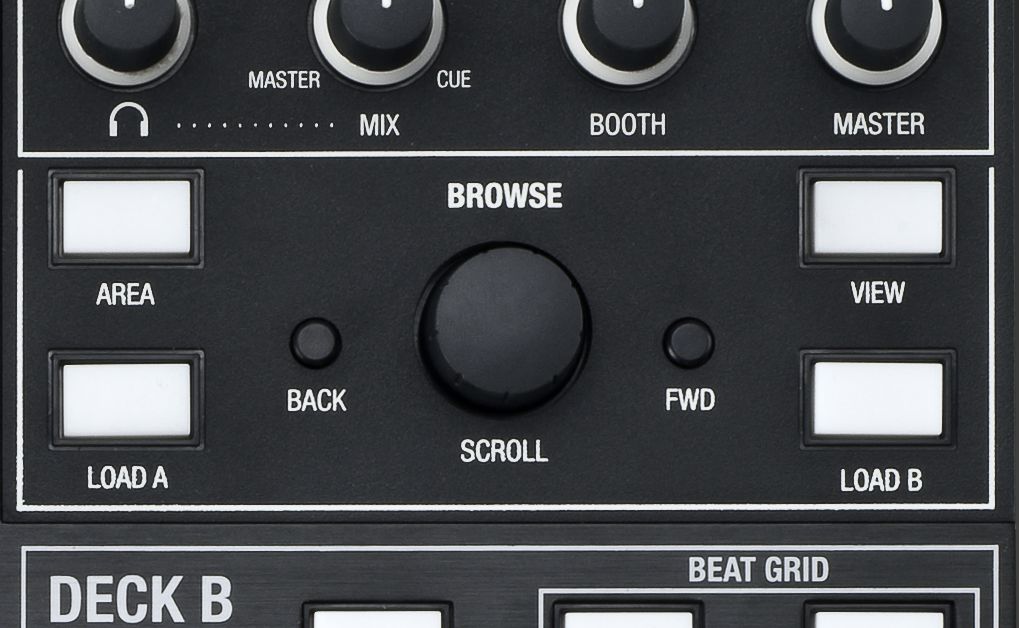 Arguably the biggest addition in Serato DJ for Twitch users is the revamp of the FX Units. Firstly, the FX themselves have had a major upgrade thanks to Serato's partnership with iZotope. The difference in quality is very much apparent when comparing to those in ITCH and are now very much on par with the FX in Traktor Pro. DJ also offers users two FX Expansion Packs, Wolf Pack FX (free) and Back Pack FX ($19), each offering plenty of unique and high quality ways to modify your sound.

The way in which you can implement these FX on your tracks using Twitch has changed quite considerably too. This could be slightly confusing for some as the Master FX section on Twitch was obviously designed for ITCH. Firstly there is now the option of choosing between Single and Multi FX modes. Single Mode allows you to only control one effect per FX Unit but tweak up to five parameters of this effect, each of which can be controlled directly from Twitch. In Multi FX, you can control up to three FX per unit but can only adjust the Depth (dry/wet) of each one. To change between these two modes on Twitch hold down Shift and press the Deck B button. 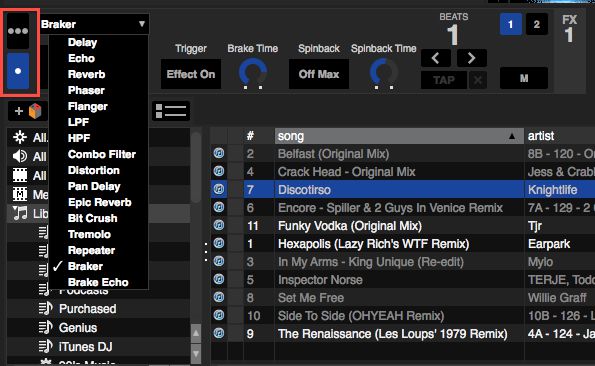 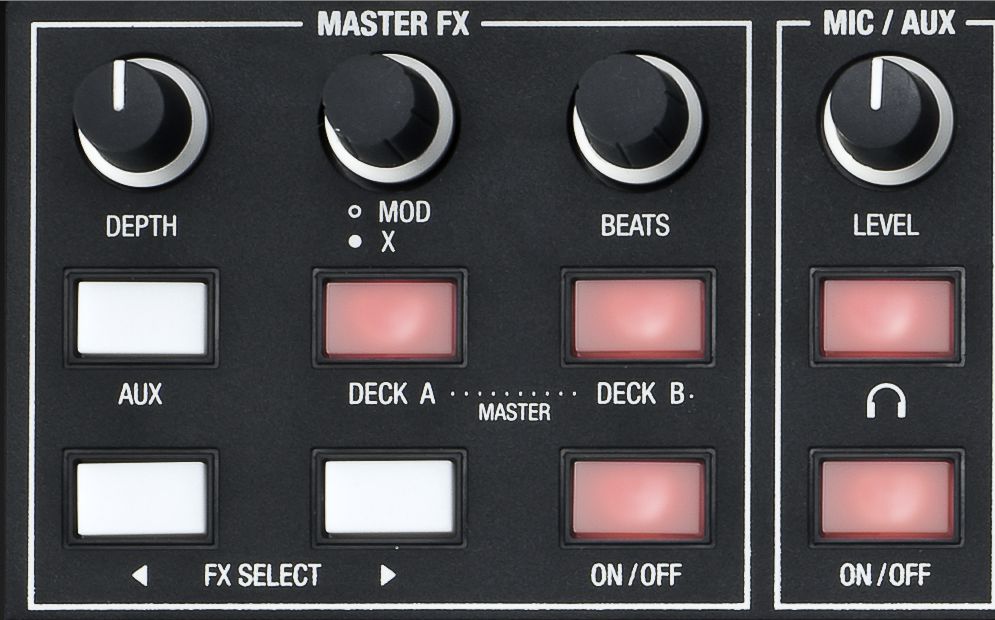 Similar to Traktor Pro, there is now two FX units in DJ, either of which can be assigned to Deck A or B. The FX select buttons can be used to select which Unit you want to control at that moment in time. Holding Shift while pressing the left or right FX select buttons assigns the selected Unit to Deck A or Deck B respectively. The On/Off button assigns the FX Unit to the master output.

Thankfully, controlling the 'Depth' of your FX is still possible using the track faders. This feature can be activated in Single FX Mode by pressing the relevant on/off button in the Fader FX section of Twitch. In Multi FX Mode the on/off buttons will activate the effect that is in slot one of the FX Unit. As with ITCH, pushing the Select knob will toggle through the various FX while twisting it will adjust the beat value that the particular effect is synchronized too. In fact, you can now manually input the beat value by tapping on the Deck B button. 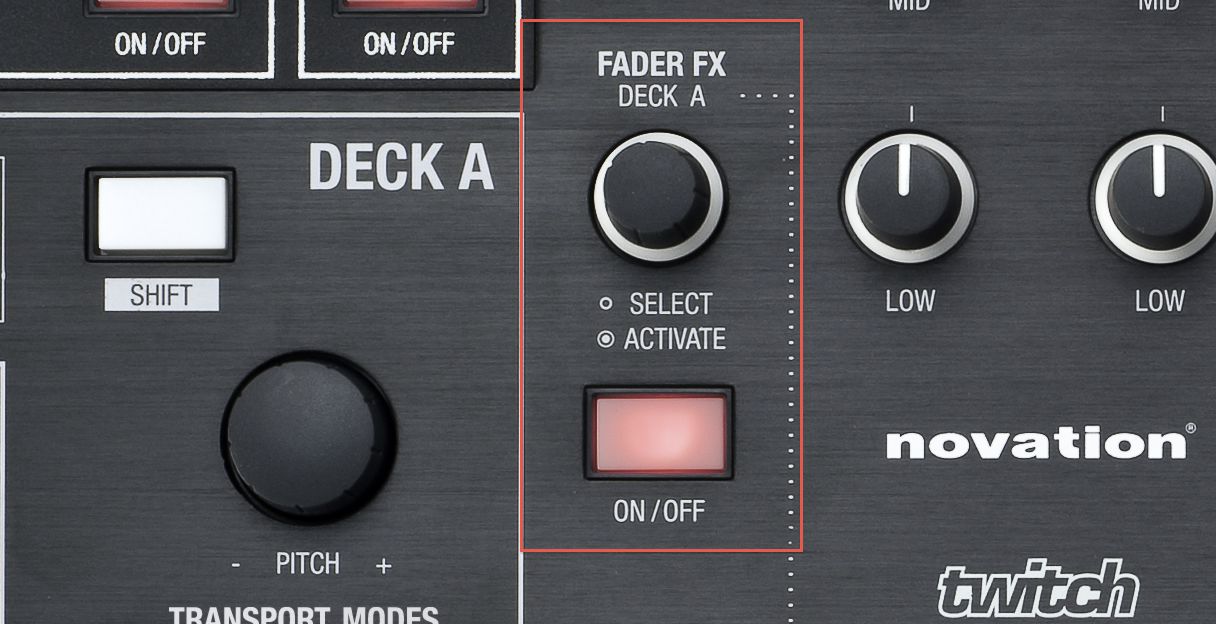 Another major new feature in Serato DJ is the MIDI Mapping which means we are no longer limited to just using Twitch when DJing. The feature allows us to add extra controllers to our setup to give us even extra hands on control. This is a godsend for those who felt that the Twitch wasn't providing easy enough access to every parameter in the software. I for one felt the SP-6 sample player was being underused considering accessing it meant overriding the Hot Cue pads on Twitch. Adding another controller in DJ is very straightforward. Simply connect your controller before you open the software. From the setup menu, select the MIDI tab and make sure your device is recognized and enabled. At the top of the main interface click the MIDI button to enter mapping mode. Click the parameter that you want to map and move the relevant button or knob on your controller. For example, I am using the Novation Launchpad to trigger samples from the SP-6. The Hot Cue buttons are now left alone. Furthermore a dedicated sample pad controller like the Launchpad is much better for triggering samples and live finger drumming than the performance pads on Twitch. I am also using a pad to activate the new Slip mode feature in DJ as there is no dedicated button for it on the Twitch. 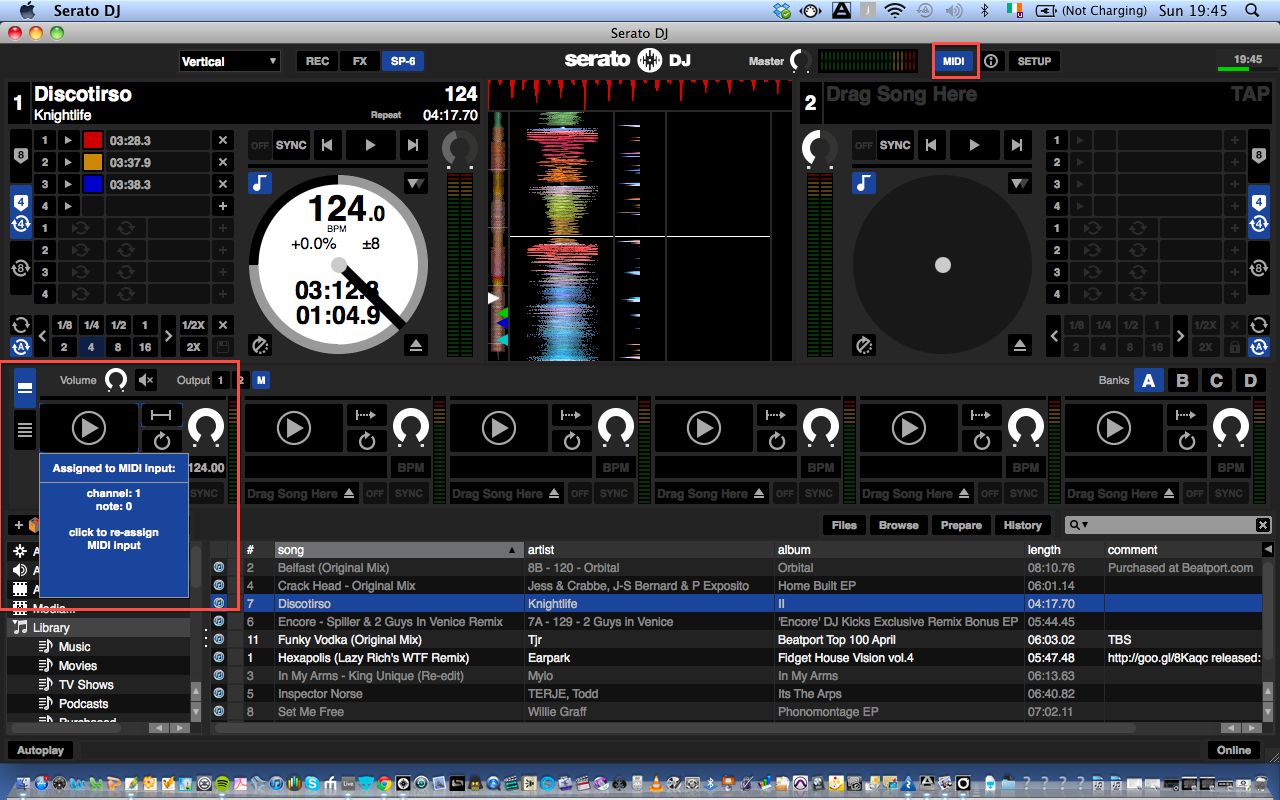 If MIDI Mapping wasn't enough, you can now control DJ wirelessly from your iPad using the Serato Remote app, perfect if you're one of those DJs who likes to wander around, interacting with the crowd. With all this extra control that Serato DJ offers hopefully you won't give up using the Twitch altogether. One place where Twitch really stood out before was the Performance Mode section of the controller, enabling users excellent hand on control over Hot Cues and Loops within ITCH. It doesn't come as a massive shock so that not a lot has changed. One addition however is Manual Loop mode, which can be accessed by tapping the Loop Roll button twice on Twitch so that it starts to flash. Needless to say this allows us to input our loops manually. To set the in point for a loop, tap Pad 5, making sure you are still in Manual Loop Mode. To set the out point tap Pad 6. To activate/deactivate your manual loop tap Pad 7. 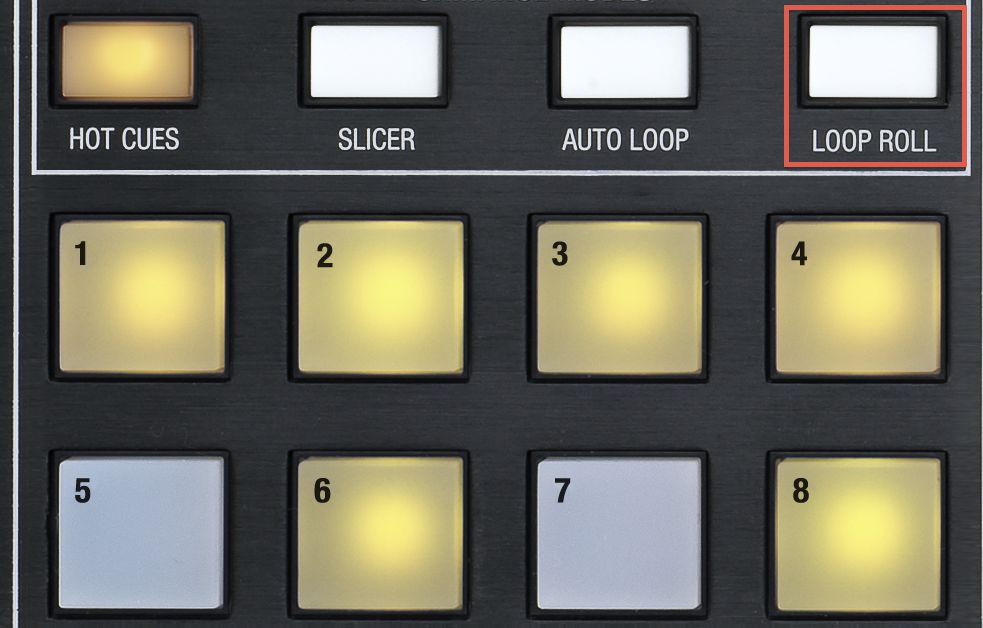 So there you have it. Twitch was a powerful controller before this and with the introduction of Serato DJ, this is even more the case. Getting to grips with controlling the new FX Units may take a while as the FX controls were created and labeled for the FX within ITCH. However, it is still well worth it considering how much extra control you now get and how good the new iZotope FXs actually sound. Also, if for some reason you felt that Twitch wasn't hands on enough before, your mind should be put at ease with the ability now to add a secondary controller to your setup. So, if you still haven't downloaded Serato DJ then what are you waiting for? Ditch that ITCH and get DJ instead.