Language
sE Electronics, founded in 2000, have released two new dynamic microphones for live performance as part of the V Series, and one new/upgraded condenser microphone in the form of the X1 A.

Tuesday, September 27th, 2016–Rohnert Park, California, USA - For this year’s AES Show in Los Angeles, sE Electronics is proud to announce the X1 A, a new entry point to their acclaimed X1 Series designed to be the best-in-class offering on the market for home recordists and bringing the heritage of the X1 Series to an expanded user base worldwide. On the live sound front, sE has also announced a pair of dynamic microphones – a first for the company, known primarily for their industry standard Reflexion Filters® and hand-crafted condensers. According to sE, the new V7 supercardioid dynamic and V3 cardioid dynamic offer “exceptionally low handling noise, a more natural sound, and higher gain before feedback than other mics in their class”.

The X1 A utilizes a newly-developed acoustic design with a carefully selected condenser capsule, low noise electronics, an integrated windscreen, and a gold-plated XLR connector. Just like the acclaimed X1 condenser, it also includes a switchable attenuation pad & low-cut filter and a robust all-metal chassis. According to sE’s Product Manager Thomas Stubics, “The whole team has been working very hard on this completely new acoustic design, which delivers an impressively pristine sound that one would expect from a much more expensive product. The new X1 A delivers not only best-in-class sound quality at its price point, but also convinces with its useful features, high dynamic range, and impressive workmanship.” 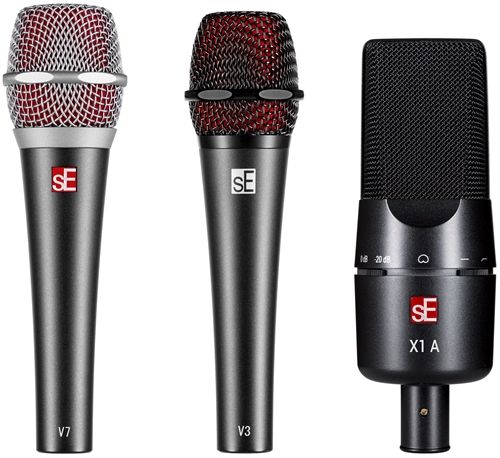 The X1 A will arrive in stores worldwide in October 2016, with an MSRP of $129 USD / €129 EUR. It ships with a newly designed mic clip and mic stand thread adapter, and is fully compatible with sE’s Isolation Pack shockmount. Though their studio condensers and Reflexion Filters are already utilized by many high-profile touring acts like Linkin Park and Tom Petty & The Heartbreakers, the V Series marks a direct foray for sE into the live sound world, and their first dynamic microphones. Both the V7 and V3 have all-metal housings and beveled spring steel grilles, internal windscreens & patented integrated capsule mounts to offer excellent sound, superior reliability, and impressively low handling noise. The V7 is a supercardioid model with a specialized aluminum voice coil custom-developed for a “crisp, open vocal sound”, while the V3 is a cardioid model intended for general use on any voice or instrument.

For more on the new X1 A from sE Electronics, please visit: http://seelectronics.com/se-x1a-mic

For more on the V Series Dynamics, please visit: http://seelectronics.com/se-microphones/dynamic