GAMELAN is where world instruments meet hybrid synthesis. Achieving this is easier said than done, though that is exactly what the talented team at Sample Logic has achieved with relative ease... well, with a little help from their friends. Recorded on the celebrated scoring stage at Skywalker Sound in Marin County, California, GAMELAN features over 1,700 world-class traditional and morphed gamelan instruments which will surely blow the creative minds of sound designers, composers, musicians, and producers alike. No fewer than 25 instrumental (Grantang, Jegogan, Jublag, Kajar, Kantilan, Kempli, Pemade, Penyacah, Reyong, Suling, Trompong, and Ugal) and percussive (Cedugan Wadon, Cedugan, Ceng Ceng, Gentorag Chime, Gong, Gupekan Wadon, Gupekan, Kempur, Klentong, Krumpungan Wadon, Krumpungan, Rebab, and Vocalese) Balinese instruments were recorded there in 24-bit/88.2kHz, then morphed and mutilated to craft the highly-creative content for GAMELAN.

GAMELAN welcomely weighs in at over 14GB as a result. As such, it features a diverse library of 1,700 KONTAKT PLAYER-compatible patches, perfectly divided into the following categories: 421 ATMOSPHERES (58 BIZARRE, 97 DARK - MYSTERIOUS, 71 ELECTRONIC - EFFECTUAL, 87 MIXED EMOTIONS, 28 STINGERS, and 79 WORLD ORGANIC); 316 INSTRUMENTALS (55 ARPEGGIATED, 104 WORLD ORGANIC, 74 SYNTH, and 82 TRADITIONAL); 332 LOOPS (84 ACTION PACKED, 120 ELECTRONIC - EFFECTUAL, 51 POP HOP, 56 WORLD ORGANIC); 368 PERCUSSIVES (31 ARPEGGIATED, 11 HIT ENSEMBLES, 266 IMPACTS, 17 TRADITIONAL, and 42 TRANSITIONS); and 260 MULTI CORES (34 ATMOSPHERES, 71 INSTRUMENTALS, 53 LOOPS, and 47 PERCUSSIVES). Explore unlimited possibilities within GAMELAN by combining those ATMOSPHERES, INSTRUMENTALS, LOOPS, and PERCUSSIVES within a single, easy-to-use interface. Moreover, mix up to eight ‘Soundsources’ while retaining nuanced control over each sound to create massive ambiences, crushing impacts, complex loops, soaring leads, or even stacked multis with all of the above triggered by a single note! Alternatively, why not simply use one of the thousands of included preset instruments for instant inspiration? 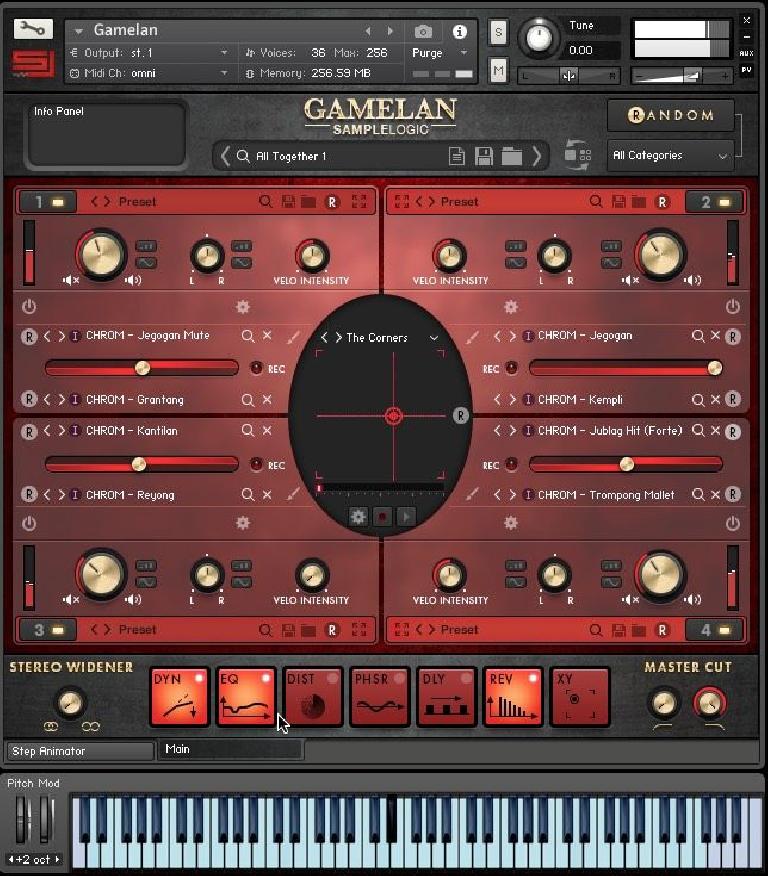 Start from the simplest seed element of a sound and work outward with GAMELAN’s intuitive interface. All such ‘Soundsources’ are loaded into a so-called SOUNDCORE — each capable of playing back two ‘Soundsources’ (Soundsource 1 and Soundsource 2) simultaneously, packed with SOUNDCORE FX, including reverb, convolution, filters, distortion, and much more.

More adventurous users can explore even headier heights of creativity by using up to four SOUNDCORES simultaneously, allowing for infinite blends of up to eight SOUNDCORES at any given time. And, as if that was not enough to be getting on with, MASTER FX can be applied to all SOUNDCORES to create truly out-of-this-world results!

Not quite ready to take the plunge into the deeper depths of GAMELAN? No need to worry. With over 880 ‘Soundsources’; 700 SOUNDCORE presets; 1,400 SINGLE CORE instrument presets; and 260 ready-to-use MULTI CORE instrument presets to its inspirational name, GAMELAN gives its users over 2,400-trillion sonic combinations to work with. More than enough to blow the most creative of musical minds, surely?

Saying that, GAMELAN gamely utilises Sample Logic’s intelligent randomisation technology to allow users to randomly generate epic- sounding presets at the speedy click of an always-available RANDOM button... couldn’t be simpler in practice! Powerful randomisation options allow anyone to specify the types of sounds and settings to be selected from during the randomisation process. Want to create an ATOMSPHERES instrument on the fly? Simply select ATMOSPHERES using the drop-down menu. Similarly, select from INSTRUMENTALS, PERCUSSIVES, and LOOPS, or, throw caution to the wind, and select All Categories at once. Whatever choice is made, the RANDOM function is great for building multi-stacked instruments and is sure to fire up creativity still further!

Finally, in keeping with Sample Logic’s long-running tradition of interminable innovation, GAMELAN includes its creators’ critically-acclaimed Step Animator sequencing engine with world-class arpeggiation and sequencing delivered right to your fingertips. For example, Link/Alt mode makes it possible to select individual SOUNDCORES to be triggered by each step of the Step Animator while unselected SOUNDCORES sustain!

Thanks to Sample Logic’s technical tenacity, world-class Balinese instruments have been truly transformed into a world-class virtual instrument fit for a new world. Why not transform your music game with GAMELAN?

GAMELAN can be preordered online and directly downloaded from Sample Logic for $299.99 before September 15 from here: http://www.samplelogic.com/products/gamelan (It is released on September 15 with an MSRP of $399.99.)

Stay tuned! We have a review of Gamelan coming shortly...