Language
As if pattern sequencing 808-style wasn't already fun enough, Roland's TR-REC is a music game app that is set to bring music making (game-style) to the masses for iOS and Android users.

So you want to make dance music, perhaps more casually than with a full-blown Roland AIRA TR-8 or (insert numerous other drum machine interfaces and machines here)? Then Roland have something ideal for you to pass some time over the holidays. TR-REC takes the already fun pursuit of pattern sequencing beats and turns it into a game experience. Plus this app is free.

I expect Roland are hoping to attract gamers flirting with the idea of making dance music, who aren't catered for by guitar hero oriented games. There's undoubtedly some cross-over between music making and gaming so it makes complete sense. The big question is whether other companies like Korg, Novation, Native Instruments, etc will also look to grow their appeal in the gaming market.

Here's what Roland have to say about their new TR-REC game app:

Los Angeles, CA, December 16, 2015 — Roland is pleased to announce the launch of the TR-REC GAME on Apple's App Store and Google Play. TR-REC GAME is a rhythm entry game app for smartphones and tablets that incorporates the rhythm programming schemes used in Roland's TR-808 and TR-8 rhythm machines. 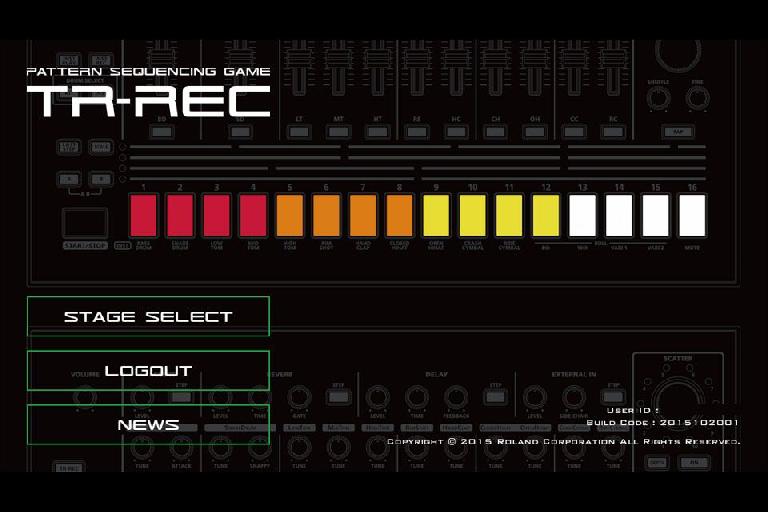 Roland's TR-REC GAME app for smartphones and tablets is played by listening to the game’s original dance music and selecting different tones–including kick drum, snare, hi-hat, and cymbals–to tap in specified rhythm patterns on 16 buttons that mimic musical notes. As the game proceeds, the drum tones get overlaid on top of each other, gradually creating a dynamic rhythm pattern for the dance music. Players move on to the next stage if they are able to tap in the specified drum tones within a given amount of time. In addition to the satisfaction of completing successive stages, players can also enjoy the sounds of authentic dance music and drum tones, all the while learning more about rhythm compositions and how different elements work with each other.

In the TR-REC GAME, Roland programmers have reproduced the tones found in Roland's TR-808 and TR-8 rhythm machines that are extensively used in dance music, along with their rhythm programming schemes. All users can begin playing the game without a learning curve, as tapping in the notes is very easy, and can be learned by simply completing the tutorial stage. TR-REC GAME supports iOS and Android, and is available as a free download from either Apple's App Store or Google Play. Players can also share their scores on Facebook and Twitter. 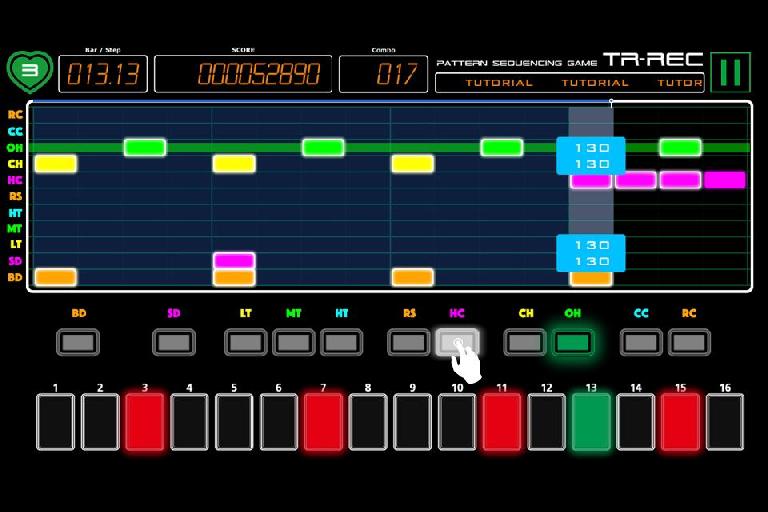 An in-game screen from TR-REC

Players can enjoy programming authentic dance music in a fun game setting. TR-REC GAME features 16 original dance music pieces, and 48 stages in all. Players receive points for tapping in the rhythmic elements correctly, and receive bonus points for completing a pattern. Players lose one life every time they are unable to complete a rhythm pattern within the specified amount of time. The game is over once they use up all of their lives. The game also contains a variety of extras including Gain a Life, Help Guide and Auto Rhythm Entry to enhance the excitement of the game. Players can go to the TR-REC GAME menu to purchase in-app coins, which they can use to purchase lives and stages.