Language
With an eye on bringing the old into the new Roland have announced their expandable synth with next-gen ACB technology, Direct-Access Controls, and advanced features. Here's all the official info.

Powerful and deep, the SYSTEM-8 delivers a vast palette of sounds inspired by over four decades of legendary Roland synths. Its next-gen Analog Circuit Behavior (ACB) engine powers an eight-voice, three-oscillator monster with stunning filters and effects, highly versatile LFOs, and a massive array of high-resolution knobs and sliders to control it all. Support for three PLUG-OUT synths means the SYSTEM-8 can host spot-on recreations of numerous Roland classics, and JUPITER-8 and JUNO-106 PLUG-OUTS are even included with purchase (*). Split and layer synths for unheard of sounds, and tap into the integrated vocoder, arpeggiator, CV/Gate outs, and advanced polyphonic step sequencer to fuel endless creative explorations. 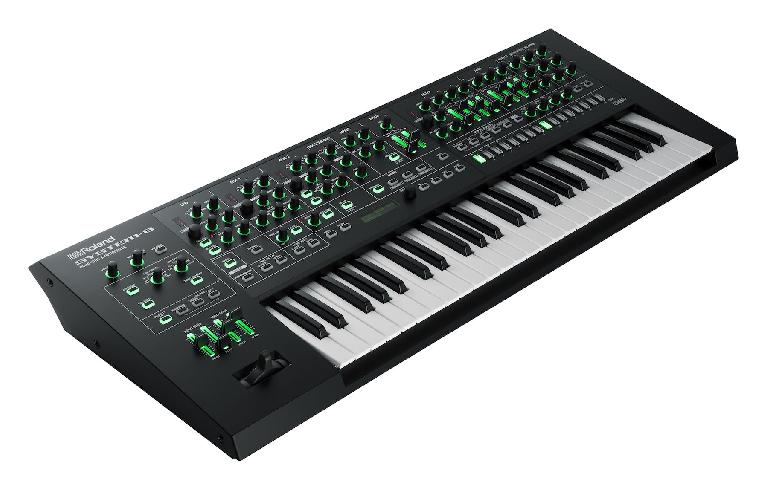 * Support for SYSTEM-8 on previously released plug-out synths to be available soon.

Roland’s universally acclaimed Analog Circuit Behavior approach accurately recreates historic analog sounds with forward-thinking technology. The SYSTEM-8 is equipped with the most advanced ACB engine yet, which offers eight voices of polyphony, three oscillators (including a sub oscillator option), and silky-smooth filters with ultra-detailed resolution. It’s easy to dial up warm pads, fat basses, expressive lead tones, and more, all inspired by the rich sonic character of the legendary SYSTEM series. Reaching beyond the retro vibe, the versatile SYSTEM-8 is also capable of producing crisp, dynamic tones and evocative textures that are ideal for modern sound designers. 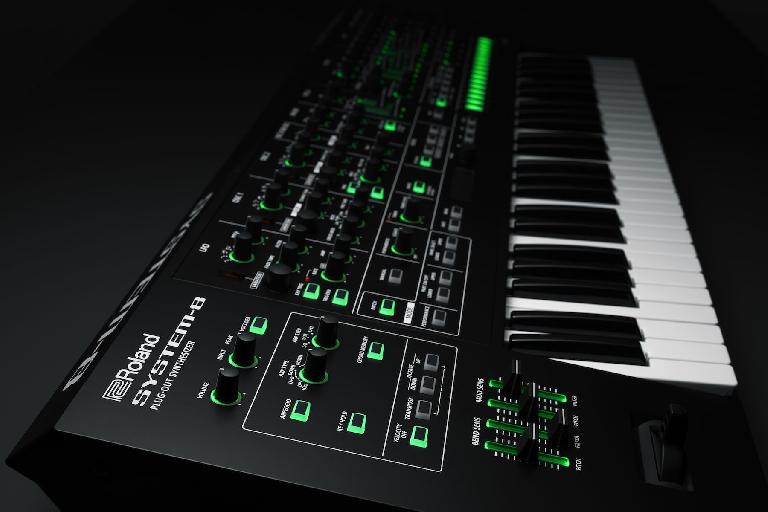 In addition to its impressive internal sound engine, the SYSTEM-8 features three expansion slots for hosting and controlling Roland’s PLUG-OUT software synths. JUPITER-8 and JUNO-106 PLUG-OUTs are included, giving you immediate access to authentic sonic reproductions of these Roland classics (*1). Optional PLUG-OUTs such as the SH-2, SH-101, PROMARS, and others are supported as well (*2). Using the SYSTEM-8’s Performance mode, you’re able to combine the internal synth engine and hosted PLUG-OUTs to create super-synth patches with layered voices, custom splits, and more.

*2 Support for SYSTEM-8 on previously released plug-out synths to be available soon.

With its comprehensive interface, the SYSTEM-8 offers countless ways to shape sounds and discover new ones. The panel is packed with direct-access controls for dynamic sound creation and live performance expression. Many hi-res filter types are available courtesy of the advanced ACB engine, including a powerful side-band filter inherited from Roland’s influential V-Synth. Tons of top-notch effects are on hand for adding character and ambience, from overdrive, distortion, and fuzz to delay, chorus, reverb, and more. And just like the numerous synth parameters, the effects have grab-and-go controls that make it simple to enhance sounds as you play.

Designed to inspire, the SYSTEM-8 is filled with intuitive performance tools to spark your creativity. The 64-step sequencer features a familiar TR-REC style interface and dedicated controls to record, play, and manipulate loop sequences in real time. While building your sequences, you can capture single notes or full chords, as well as all your knob and slider moves. The Arpeggio function is equipped with quick-access knobs for switching patterns and styles as you play, while Chord Memory allows you to trigger polyphonic note stacks with a single key. The SYSTEM-8 even has an advanced vocoder built in, offering another expressive option for delivering unique and memorable synth performances.

While the SYSTEM-8 excels as a performance instrument, it easily integrates with your production software and external gear. The synth functions as a USB audio/MIDI interface for your DAW, and the 49 full-size keys provide a responsive, great-feeling keyboard for recording MIDI tracks. There’s even a control surface mode for using the SYSTEM-8’s knobs, sliders, and buttons with your soft synths. And with the built-in CV/Gate outputs, you can send note/pitch data from the synth engine and step sequencer to trigger your modular synths and retro gear.