If you'd like authentic sounds of the classic Roland TR-909 Rhythm Composer combined with the convenience of an audio plugin inside your DAW, you're in luck. Roland just released the official plugin.

Here's what Roland tells us about the new TR-909 virtual instrument plugin:

Los Angeles, CA, April 3, 2018 — Less than a month after releasing the landmark TR-808 Software Rhythm Composer, Roland Virtual Sonics is proud to announce the release of the legendary TR-909 Software Rhythm Composer to the Roland Cloud service. For the first time in history, music creators will have access to the authentic TR-909 as a plugin for popular digital audio workstations via the Roland Cloud service.

In 1983, Roland followed the massively influential TR-808 Rhythm Composer with the TR-909 Rhythm Composer. Desiring that their next offering sound more like acoustic drums, Roland took a unique and revolutionary hybrid approach that used analog circuitry for the kick, snare, hi-hat, clap, and toms, and used digital sampling for the cymbals. The result was one of the most beloved and influential musical instruments ever made. Although Roland only produced approximately 10,000 units, the influence of the “909” remains a driving force in music to this day.

Using Roland’s next-generation Analog Circuit Behavior modeling technology, Roland has faithfully recreated a software adaptation of the original hardware circuitry that gave the TR-909 its distinctive sound, including its analog-digital hybrid nature. In addition to detailed behavior models of the analog circuits, Roland has integrated the TR-909’s original sample ROM. The new TR-909 even comes modeled with the primitive (by today’s standards) digital technology present in the vintage hardware, capturing the essence of the 909’s cymbals and recreating the sound that made them a perennial favorite of dance music producers the world over. The painstaking attention to detail present in the TR-909 signifies that musicians and producers can finally have the authentic sound and feel of the original 909 in their digital audio workstations. 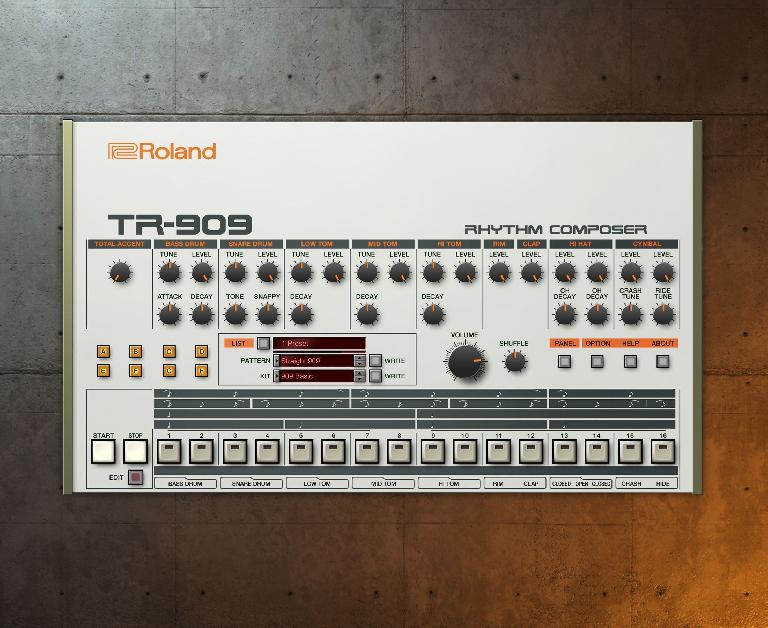 As with its predecessor the TR-808 Software Rhythm Composer, Roland has capitalized on the power and flexibility provided by modern DAW software and combined these with the robust feature set found in the original hardware. Each pattern on the TR-909 has eight variations, enabling artists to create evolving sequences. The classic 16-step “TR-REC” sequencer expands to include a sequencer lane for each drum instrument, providing fast and fluid programming. The sequencer has adjustable flams and sub-steps, enabling detailed fills and ratcheting sequences. Each instrument has its own “last step” and shuffle settings, allowing flexibility with timing, experimentation with polyrhythms, and the ability to dial in just the right groove to meet the needs of modern creators’ tracks. Music creators can even drag patterns from the TR-909 directly into their DAW as MIDI or audio clips.

To learn more about the Roland Cloud and the release of the TR-909 Software Rhythm Composer, visit RolandCloud.com.