Does the new Roland Fantom 8 drop a marker for other keyboard synth workstation makers to measure up to? Matt Vanacoro finds out and discovers there's some futuristic features inside.

The era of the ‘flagship workstation’ is still very much alive, and competition between the ‘Big Three’ (Roland, Korg, and Yamaha) has brought the modern keyboard player a hell of a lot of innovation over the last decade. While some may have predicted that workstations would ‘fall off’ with the introduction of MainStage, VSTs, and sample libraries - Roland aims to embrace the era of computer plugin hosts with open arms with the Fantom. I’ve spent the last month with the Fantom 8 and the 2.0 software update. Let’s take a look at Roland’s current keyboard mascot.

The Fantom 8 is an absolute unit at 17.3” of depth and 61 pounds of weight. The keyboard sports a pair of pitch/modulation wheels AND an x/y style joystick, making for some interesting control possibilities. The weighted keys feel solid and playable, but I did find them to have a bit less ‘depth’ in the distance they traveled compared to, say, the Korg Kronos. Not a deal breaker, but something I did need to get used to a bit. 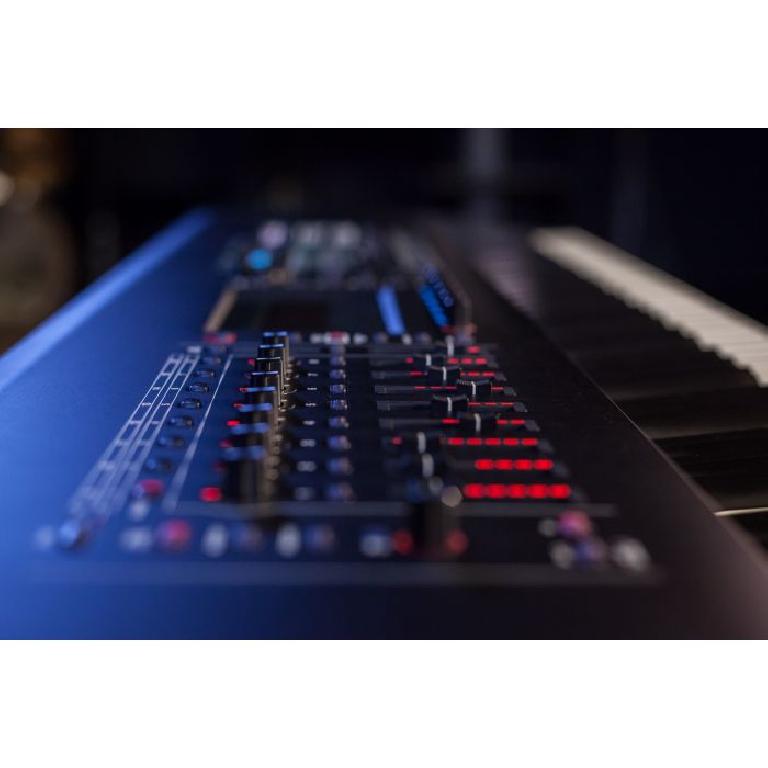 There are 9 sliding faders and 8 rotary knobs above them, all with excellent LED feedback. The touch screen display is bright, colorful, responsive, and has 6 knob/button combinations below it for parameter selection and adjustment. The right side of the keyboard contains dedicated OSC / Filter / Amp / Effect controls as well as 16 illuminated buttons for sound categories below. There are also dedicated sequencer controls just under the filter section. Finally, 16 trigger pads are housed on the far right and they can be used for a variety of workflows.

The fantom has XLR balanced outputs, reducing the need for a direct box in many cases. There are also 1/4” main and sub outputs. Following the theme of ‘this thing works with a lot of other things’, there are 2 pairs of CV / Gate output as well as a pair of analog filter outputs. On the USB side, you’ve got dedicated computer and memory ports as well as 3 additional USB ports for external devices. Roland *really* wants you to be able to hook up your Fantom to just about anything, and it shows!
For sampling and processing you’ve got 2 mic/line balanced inputs with combo connectors. 4 pedal inputs as well as Midi in/out/thru round out the connectivity options on the back.

The sounds of the Fantom are definitely quite an evolution from Roland workstations in the past. They sound modern, full, and often complex. With a variety of engines running digital modeling, sampling, and analog synthesis styles you have quite a bit of power to draw upon and combine for some great sounds. The V-piano engine models components of the piano, specifically, allowing you to have control over lid position, pedal noises, and such. It’s what I expected from a modern flagship workstation and I was not disappointed. I found the included pianos to play quite nicely, but actually preferred some of the downloadable options that are free with the purchase of a Fantom. I do wish the downloadable libraries were simply included, as there were a TON of great sounds in there ranging from synth options to some really great electric pianos. The 9 physical sliders on the keyboard do not control organ ‘drawbars’ in any presets I could find, and that is something I am truly hoping is addressed in a future update.

One of the features I was most excited about exploring was the connectivity with a computer DAW or MainStage. I had the opportunity to try out the Fantom 8 at NAMM last year, but there were no workstations available to try this feature out. The Fantom 8 has USB audio interface built in that allows you to shuttle sound to and from your computer. Combined with physical buttons and knobs that can be quickly mapped to AU/VST plugin parameters, this enhanced control allows for some really stunning hardware/software combinations. I was able to easily set up sounds that utilized the internal sounds from the Fantom and my favorite AU plugins on my computer. The Fantom screen even offered on-screen feedback from the computer and the ability to see levels from my ‘in the box’ instruments! I quickly created a layered sound using the piano from the Fantom and some hefty strings from Native Instruments Komplete and was able to control everything right on the Fantom as if it were all internal. The Fantom might be the first workstation to truly work ‘with’ computers instead of somewhat competing with them. 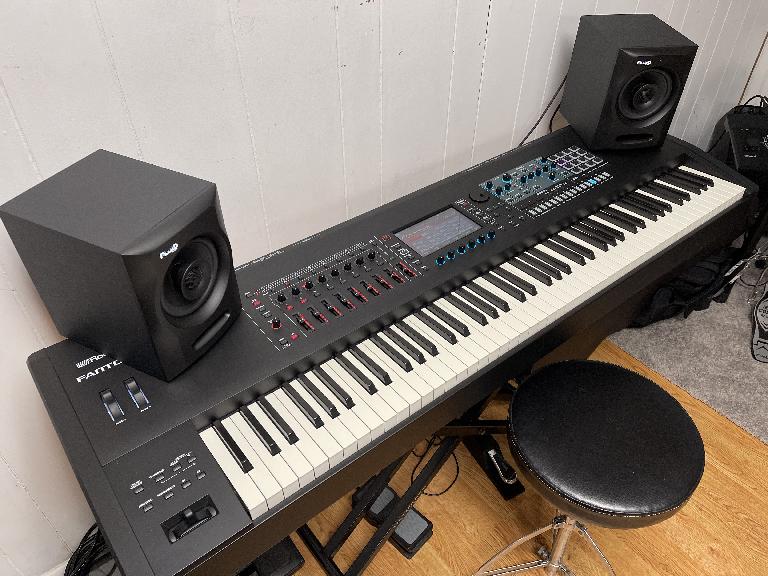 The Fantom is particularly interesting in the way it organizes sounds in that there is only a ‘single mode’. Much like the Yamaha Montage, the Fantom has eliminated the ideas of ‘programs and combinations’ and organized everything into scenes. A scene can have one sound, or it can have twelve, but you don’t have multiple modes to juggle when you are trying to navigate between presets and that is a trend I’m happy to see taking over the market. Roland does provide an interesting twist in offering a ‘single tone’ button which quickly takes you into a mode where you are browsing the categorized single timbres of the Fantom, and this process is made even easier with the physical buttons included for sound categories.

The sequencer has some diverse options with the 16 category buttons doubling as a TR-style sequencer controller. Roland has also included clip-based sequencing a-la Ableton Live, and it’s pretty amazing to see that an entire style of DAW has been included as an option in a flagship synth.

The Fantom 8 moves the entire market forward in a lot of surprising ways. Roland has made aggressive moves to make sure that Fantom owners know how to use the keyboard (offering up Product Specialist Ed Diaz nearly 24/7 online with workshops, videos, and Q/A sessions). This keyboard has some incredibly futuristic features and will definitely drop a gauntlet that I’m anxious to see other companies respond to. It is wonderfully refreshing to see a major keyboard company embracing the computer rather than trying to ‘catch up to it’.

Cons: No organ drawbar control, keyboard feel on the 88 key model is very different from the major competitors. You might love it, you might not.

William
I just installed the 4 free sound packs that are available. Is there a way to get to the files rather than menu diving?