Language
Rob Papen's Predator 2 is one of the most hotly awaited virtual synths this year. Originally scheduled for a September release it's available now and looks like it could be worth the wait.

ECHT, THE NETHERLANDS: virtual instrument and effects plug-in developer Rob Papen Soundware is proud to announce availability of Predator2 — successor to Predator, the natural-born, killer-sounding soft synth that has inspired so many composers and artists, adding musical bite to countless tracks, thanks to its cutting-edge features and world-renowned sound designer (and namesake company founder) Rob Papen’s preset-programming prowess — as of November 25...

And here's Rob Papen presenting a live stream of Predator2:

As an award-winning product, Predator has been making its musical mark as a meaty mainstay of Rob Papen’s lengthening lineup of world-class soft synths since its introduction back in 2009. That’s a long time in the furiously fast, ever-widening world of music technology — testament to the popular product’s proven strengths, surely? Take a good thing and make it better best describes Predator2, then. 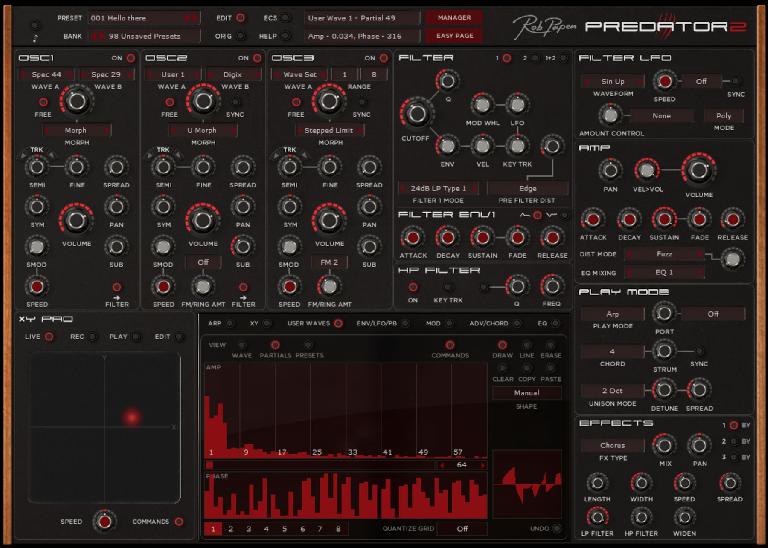 Indeed, in the first instance, Predator2’s pliable GUI (Graphical User Interface) has once again been given the trademark Rob Papen treatment, designed so that (almost) all of the main controls are always visible onscreen, making it both inspirational and intuitive in use. Ultimately, though, time and patience can be an issue for some users, so this time Rob Papen has helpfully included an EASY PAGE to cater to those not needing simultaneous access to so many controls. There they can quickly find the most important parameters to tweak a sound or even use the handy preset VARIATIONS function, which is an intelligent randomiser. Really feeling the need for speed? No need to look any further!

Improvements in Predator2 are much more than simply skin deep. Digging deeper still, it is packed to the teeth with powerful new features to die for. First and foremost, each of the three oscillators are now dual-equipped affairs with WAVE A and WAVE B including a variety of mixed and morphed waves between them. That said, there are now no fewer than eight editable USER WAVES which can be combined into wave-sets that are traversable in different ways. Each of those USER WAVES is editable with up to 256 different partials and advanced controls to edit and shape the wavetables. With many wavetables and wave-sets included in Predator2, the all-important building blocks of its inspirational sound abilities are already streets ahead of its popular predecessor.

Pushing onwards and upwards, all oscillators and filters are now fully stereo. Speaking of which, the flexible FILTER section is bolstered by a much-expanded second filter (FILTER 2) section with full controls and envelopes, plus a third high-pass filter (HP FILTER) section for further fine-tuning. To say that Predator2 sounds ‘phat’ is surely something of an understatement! 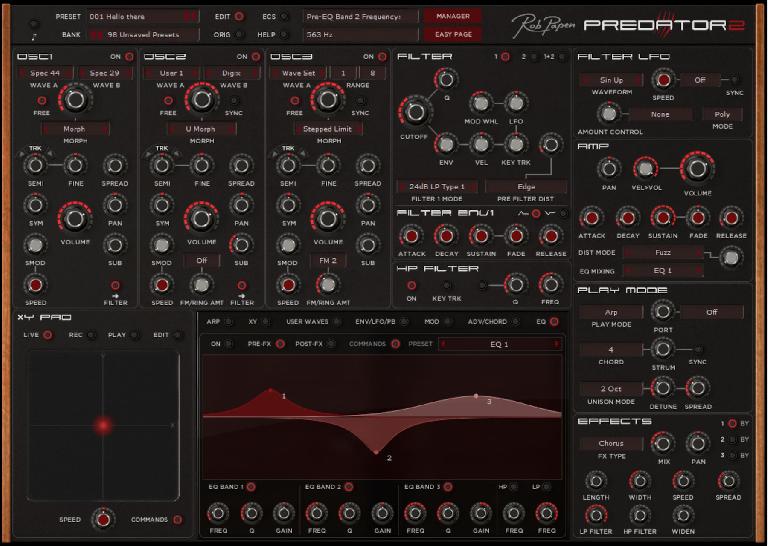 UNISON MODE has also been improved with up to six unison sub-voices for each full voice, allowing unison to work with any PLAY MODE. Meanwhile, more movement comes courtesy of an all-new XY PRO section with recordable paths that can be used to modulate all Predator2 controls.

Continuing with yet more notable improvements and additions, a dual arpeggiator (ARP A and ARP B) with Join mode means that users can create up to 32-step arpeggios — alternatively, they can try the all-new Sequencer Arp mode for yet more musical inspiration; increased envelopes, LFOs (Low Frequency Oscillators) — up from two (in Predator) to four (in Predator2), and modulation steps — up from eight (in Predator) to 20 (in Predator2) with an ADVANCED (modulation) MODE allowing users to step limits and LOWER THR and UPPER THR amounts also add to the excitement of inspirational sound design, as does ADV/CHORD (advanced chord) editing and dual three-band EQ with LP (lowpass) and HP (high-pass) filter that can be PRE-FX or POST-FX.

Finally, each section can have its own presets and directly responds to copy, paste, and clear commands. Add a Big Screen mode, much improved preset management with FIND PRESET mode and tagging (over 5,000 finest presets from Rob Papen himself and various artists to get users started), and Predator2 looks like it is all set to last longer than its long-lasting predecessor... perhaps! 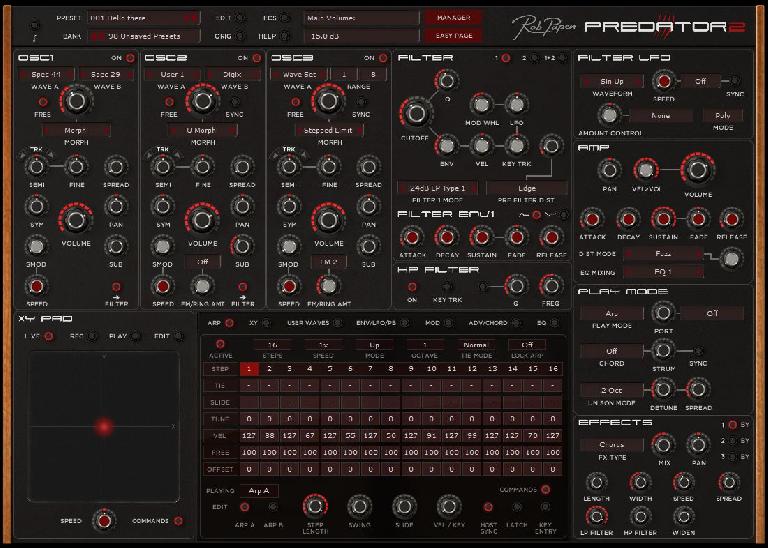 Note: eXplorer4, the latest incarnation of Rob Papen’s all-encompassing software bundle, includes Predator2, upping the total product count to 15; competitively priced at €499.00 EUR/$499.00 USD, this represents a significant saving of over 50% when compared to separately purchasing each and every Rob Papen virtual instrument and effects plug-in included!