Language
Do we need another EQ plug-in? When Rob Papen decides to make one, we probably do! There's tons of creative features in this unique concept of what an EQ can be. The XY pad being just one of these.

ECHT, THE NETHERLANDS: virtual instrument and effects plug-in developer Rob Papen Soundware is proud to announce availability of RP-EQ — expanding EQ essentials from its all-the-rage RAW soft synth, specialising in ‘distorted’ sounds specifically suited to EDM (electronic dance music) production and beyond, to create an essential EQ effects plug-in for Mac (32- and 64-bit, AAX, AU, and VST for Mac OS X 10.6 or higher) and PC (32- and 64-bit, AAX and VST for Windows Vista, 7, 8, and 10) with inventive graphics control at its instinctive heart suited to tweaking anything in hitherto unseen ways with a natural and sweet sound well worth its attractive asking price — as of September 28...

Whether used in a corrective or creative capacity, EQ (or equalisation) — adjusting the levels of frequency response of an audio signal — has long since been seen as an essential extension to the art of recording, mixing, and mastering. Indeed, in the wonderful world of virtual music production an almost unlimited choice of EQ plug-ins are available to the discerning user... from those purporting to perfectly emulate expensive, well-known, and often hard-to-source hardware classics to those that are already part of the chosen DAW (Digital Audio Workstation) itself, with much in-between and beyond. But why would anyone need another one from Rob Papen? Quite simply because RP-EQ is from Rob Papen, that’s why! Well, what, exactly, makes RP-EQ so special, then? To answer that, it helps to know where the RP-EQ concept came from.

First and foremost, Rob Papen is all about ‘sound’ so if it can collectively create something fresh for the music-making world that makes musical sense then so be it. And so it is with RP-EQ, evolving, as it did, from another Rob Papen product — namely, RAW, released late last year to critical acclaim as a soft synth specialising in ‘distorted’ sounds specifically suited to EDM production and beyond. “RAW has a focus on ‘distorted’ sounds, so this means that it has a different signal setup, synthesizer-wise... what is new when compared to our other synthesizers is that you have an EQ that can be pre- or post- distortion.” So stated namesake company founder and Managing Director Rob Papen at the time. That EQ is part of the distinctive sound of RAW and its inventive graphics control is at its instinctive heart, something that did not escape the attention of the attentive Rob Papen. “I asked Jon Ayres, who is the brilliant DSP coder behind all Rob Papen products, to send me this EQ as a standalone plug-in so that I could try it out on an audio track,” he says. “Surprised by its natural and sweet sound, I started a discussion with Jon to tweak it a bit more to achieve what would become the sound of RP-EQ.” 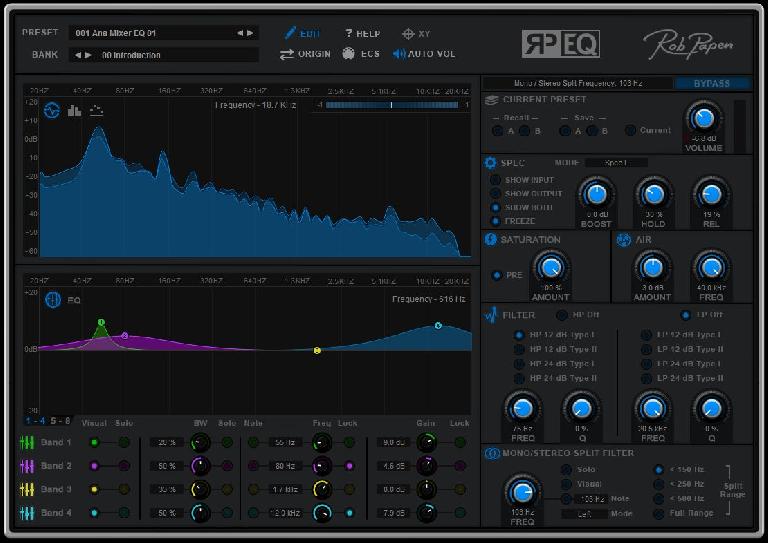 Expectedly, perhaps, there is more to RP-EQ, then, than meets the ear: “Initially, the idea popped up to also add a spectrum analyser, because this is very handy to have in the workflow when mixing, as is our famous XY pad, as featured in Blade, BLUE-II, and RAW. Having the XY pad inside RP-EQ really offers something special to the creative artists amongst us!”

That said, the natural and sweet sound of RP-EQ was enough in itself to convince creative artist Rob Papen of the value of releasing the plug-in, but before doing that he felt it wise to check his findings with others. And who better to check those findings with than Freek Vergoossen (a.k.a. DJ Free K), who just so happens to also be the brilliant ‘distorted’ mind behind the idea for RAW. Reveals Rob Papen: “We sent a beta version to Freek, who said, ‘Yes, this sounds very good, but why not add a bit more so I can use it for even more musical tasks!’ So we had a studio session with Freek, focusing on the needs of today’s music-makers and additional features for RP-EQ. Some of these were new to Jon Ayres, but we were convinced that he would be able to create them and add even more extras. The result? He’s done it... again!”

Indeed, he has. Handover to the buying public was in safe hands, as attested to by Rob Papen. “To confirm that we had nailed the additional features, final flight checks were made by DJ Promo and Rob Fabrie, who is also known for his EDM mastering skills. Both were excited by those features and confirmed the pleasant, silky sound of RP-EQ.” Endgame! 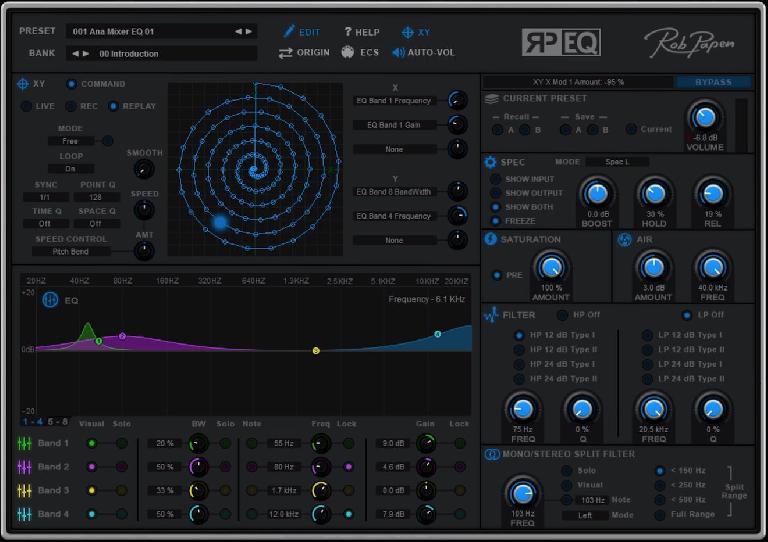 XY Section in use for creative EQing in RP-EQ.

‘Edited highlights’ of RP-EQ are as follows: eight-band EQ, which can work in regular EQ mode or Mid/Side EQ mode (with bands 1-4 being for the ‘Mid’ signal and bands 5-8 being for the ‘Side’ signal), with a graphic control panel and lower control panel with additional settings to allow users to quickly view, solo, or lock a single band; an AIR section that represents an additional EQ band, boosting very high frequencies with a wide bandwidth with the perceived effect of providing the effected audio with a bit more breathing space (or ‘air’); a FILTER section with filter slopes selectable between 12dB and 24dB per octave with two filter types — the HP (high-pass) filter with a 75Hz setting can be used to filter out any rumble or otherwise uncontrolled low-end material, for example, while the LP (lowpass) filter is a classic ingredient of any synthesizer setup, so can be used here to enhance the creative application of equalisation — that are the place to start for creating dynamic and rhythmic filter effects in combination with the XY pad; a MONO/STEREO SPLIT FILTER section to divide the audio signal into mono and stereo parts based on a frequency — typically, low frequencies do not contain much spacial information and are perceived as mono signals while spacial placement in a stereo image is provided by the higher frequencies, making this an amazing tool for contemporary music-making in a mix-bus configuration or for mastering applications; a SATURATION section for applying a ‘warming’ effect to the sound, based on the effect of saturated analogue tape recordings; a SPEC (spectrogram) section that displays the input and output signal as an FFT (Fast Fourier Transform) spectrogram, a 30-band (1/3-octave) bar spectrogram, or a 30- band (1/3-octave) single-line spectrogram; and more besides, including the aforementioned XY pad — truly unique to RP-EQ, which works as two programmable LFOs (Low Frequency Oscillators), with movement in either direction directly controlling the value of one or more RP-EQ parameters.

Put it this way: this creative collection of fanciful features all add up to making RP-EQ a truly essential music-making tool for today. Whether or not EDM is your musical bag, surely you owe it to your creative self to give your music a competitive equalisation edge with RP-EQ?

RP-EQ can be purchased as a boxed version from authorised Rob Papen dealers worldwide or downloaded directly from Rob Papen for €79.00 EUR (including VAT/tax)/$89.00 USD from here: http://www.robpapen.com/rp-eq-buy.html

Note: that eXplorer-III, Rob Papen’s all-encompassing software bundle, now includes RP-EQ as standard, bringing its total product count to 14; competitively priced at €585.00 EUR (including VAT/tax)/$699.00 USD, this represents a significant cost saving of over 50% when compared to separately purchasing each and every Rob Papen virtual instrument and effects plug-in included!