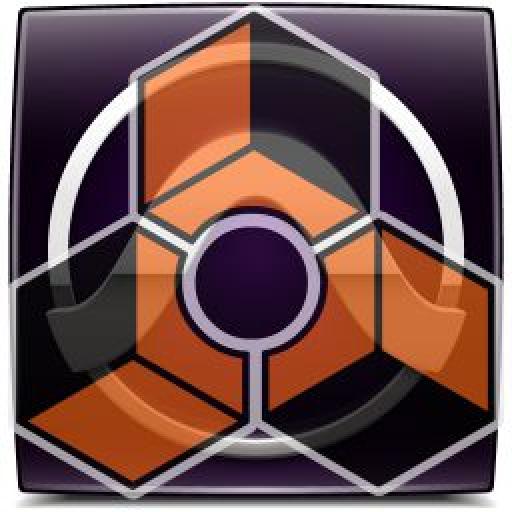 Language
ReWire allows you to get the best of both worlds by using Reason or Ableton Live along with other ReWire hosts such as Logic Pro or Pro Tools. Mike Watkinson shows you how to get connected.

Although Pro Tools 10 comes with a range of virtual instruments, you may find that the standard installation has a fairly limited range, compared to other DAWs such as Logic Pro. One simple way to remedy this is to use Reason 6 connected to Pro Tools via ReWire, so that all of Reason's amazing sound generation tools are available to you while working on your Pro Tools session.

The beauty of the ReWire protocol is that not only does the client application play its sequences in sync with the master (that is, ReWire synchronizes the transport controls and song position between Pro Tools and Reason), but also MIDI originating in the master will trigger sounds in the client, and the audio created will route back through Pro Tools' mixer.

Once Reason is installed and activated on your Mac, it is a very simple task to set up as a ReWire client from Pro Tools. Go to the Inserts of an Aux Input or Instrument track and choose the ReWire application, which should appear in the Instrument list. Pro Tools will launch the ReWire plug-in, and Reason will automatically launch. 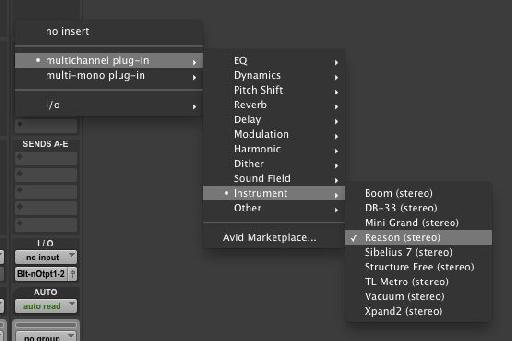 Choosing Reason as an Insert for an Instrument track.

As mentioned above you can insert the ReWire plug-in on either on an Aux Input or Instrument track, and configuring Pro Tools so that the client receives MIDI is slightly different in each case: 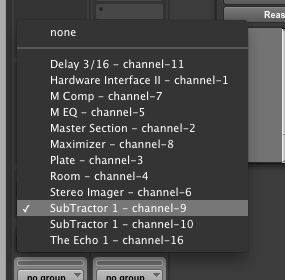 Choosing a Reason instrument with the MIDI Output selector.

To Record MIDI Data from Reason into Pro Tools

You can capture performance data created in Reason as continuous controller automation in Pro Tools as follows:

From the MIDI input selector of either a MIDI or Instrument track choose the Reason instrument from which you want to receive MIDI data: 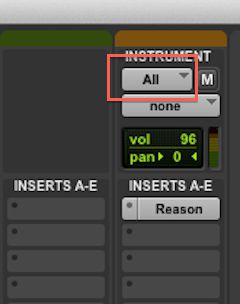 The MIDI Input selector on an Instrument track.

You can view and edit the CC data in Pro Tools by selecting the appropriate playlist using the track view selector'"the CC data should show up here as a new playlist. Alternatively, you can open a new automation/controller lane by clicking on the Show/Hide Lanes button and selecting the CC data with the Automation type selector. Pro Tools will list any recorded CC data in either of these locations as a new automation/controller playlist, so if you recorded some it should be fairly easy to find! 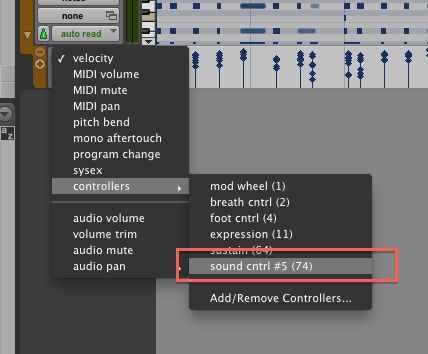 Recorded controller information is easy to spot in the Automation/Controllers view selector.

cgl0509
I enjoyed reading this post about Rewire. I would like to get audio from reason and or pull over a whole session. Is there a video explaining all of this? I am new to Pro-Tools and still going through the learning process. Thanks for all your help. I hope this was the right place for this comment/question.
thirdspace
Once reworked, Reason's audio routes back through Pro Tools' mixer so you can record it there if you wish, or combine it with sound originated in Pro Tools itself. I' m just finishing off some more Pro Tools videos for macProVideo which show this process In more detail...
thirdspace
When I wrote 'reworked' I meant 'rewired' of course - damn this iPad autocorrect!!

ruiguerreiro
Hi there! Great tutorial.. I was wondering if it is possible to automate stuff that's not in the MIDI Implementation Chart, like the knobs in a Drum Module in Kong.. I was trying to automate the Ring knob on a Hi-Hat Drum Module, but it just won't automate, and I can't see that parameter in the MIDI Implementation chart to do it mannualy either.
Do you know if this is at all possible, and how?
Thanks a lot.

Aaron Johnston
hi and thx for this, might bring me closer to my goals. i'm wondering if this is possible with Pro tools and ableton live in rewire mode. the problem i'm having right now is that, all the data gets recorded just fine in pro tools, but then when i play pro tools back, ableton isn't receiving the cc data (the automation that was recorded in to pro tools). everything works fine, but there must be some cc data that's off between the two programs. As far as i know, ableton is supposed to be able to send AND receive midi data. thx for any help on this, i'm stumped!