If you're after a multi-talented sample-based instrument that covers all kinds of composition and sound design uses, Zero-G's Ethera Soundscapes might be just what you've been looking for.

Zero-G has been making great sample libraries for many years and nowadays focuses much of its attention on Kontakt-based collections which afford far more flexibility for sound design than mere samples can. This 14GB library is aimed at score composers and sound designers, with over 500 presets spread over a number of categories. You’ll need the full version of Kontakt to run it, and there’s some drilling down into the folder to find the patches (it doesn’t install as a library, which is slightly tedious) but generally it’s easy to get up and running.

Straight To The Point 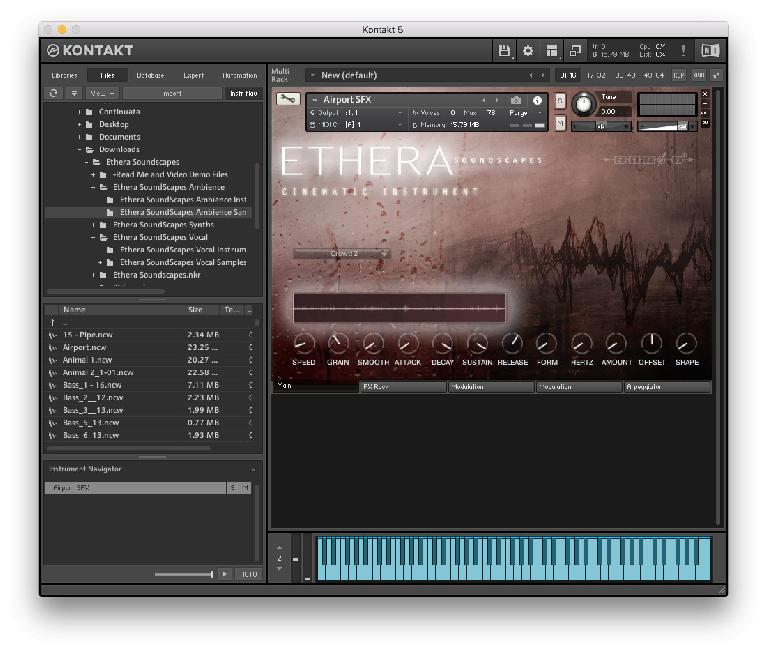 The main interface is quite straightforward although there’s a fair amount going on under the surface. The developers state that this is “three instruments in one”, and the first is a vocal library, with male and female vocal phrases mapped across key ranges and often heavily effected. These are much better than the kind of standard “oohs” and “aahs” that you might associate with vocal samples, in fact they’re much better suited to soundtrack work, being intense but still non-specific enough to serve a range of uses.

The second collection of patches is an atmospheric ambience collection, a highly usable range of evolving, mysterious and downright ominous sounds. Fire these up to evoke different kinds of moods or textures, there’s something here for almost any purpose. Third is a slightly more conventional synth library, with leads, pads, arps and more to fill out your tracks. Again the focus here is on the cinematic, and the sounds are good to go right out of the box. Of course you always get tweaking capability, and here there’s plenty to be found. The vocal library has slightly simpler controls, with a Main section allowing access to various sound shaping controls, and an FX Rack section with a suite of processors which is common to all the patches in the instrument. Switch to one of the other two libraries and you get more choice. The Main screen gains a waveform selector for changing the source of the signal, and extra dials like speed and shape. This is using a hybrid organic wavetable synth with sample grain control and you can achieve great things by playing with the speed and grain knobs to bend and twist any patch.

The FX rack is identical but then you get two modulation sections plus an arpeggiator section. These are simple enough to use but do help to introduce movement and interest to sounds. Combined with some effects from the FX section it’s easy to quickly build up really interesting textures. There’s MIDI control available in many parts of the instrument as well. This is a powerful and genuinely useful toolbox for anyone working with sound design or scoring for games, TV or film. The textures and synths are great and the vocal section is an added bonus, providing authentic sounds that can fit into a number of different situations. It’s easy to subtly or radically alter the character of most sounds using the onboard controls, and the price is really attractive too considering how much content you get. Overall, well worth a look.

Cons: You need to drill down into the folder to load patches.