For a new take on live performance and recording, Zen Audio's ALK 2 definitely offers something that nobody else is doing right now. G.W Childs finds out exactly what that is.

The ability to perform live is constantly changing and new ideas are constantly being added to the millions of ways one can perform live music. One developer - Zen Audio - is definitely challenging the way I’m looking at performing live music with ALK2. An amazing live sequencing app that mixes some of the cueing behaviors we love in games like Guitar Hero with audio recording, it allows you to strategically sculpt live music on the fly.

Complex In Its Simplicity!

There’s nothing like being able to be spontaneous in a live show. ALK2 is ingenious in the sense that you can plan where you are going to record. And then, kind of like in Guitar Hero, if you play your part, sing your part, or strum your part at the right time, ALK2 will repeat for as many repetitions as necessary. This removes the need for a traditional looping scenario where a pedal is clicked each time to cue and record different takes. Just that feature alone is enough to make ALK2 incredible. But it has several more tricks that aren’t really played up a lot, and are actually pretty mind blowing.

For example: ALK2 uses a clustering algorithm that automatically colors tracks based on particular names. Inputs and Outputs in ALK2 can be relabeled in the preferences with custom labels depicting all the necessary sources within your studio, rig or band. Once labeled, tracks will automatically be colored based on your inputs with more meaningful names, like ‘John’s Vocals’.

Equally curious, ALK2 has separate track types in the form of Command and Control tracks for on/off triggering and continuous data. But the real mindblower in my opinion is the Record Pencil that allows you to draw into the arrangement and record loops. That same naming algorithm that I mentioned earlier? You can use it to assign where the audio recorded will play back. For example: a loop named Intro can be labeled as such later in the sequence and it will play back audio from a previous loop in the arrangement with the same name. Pretty mind blowing. 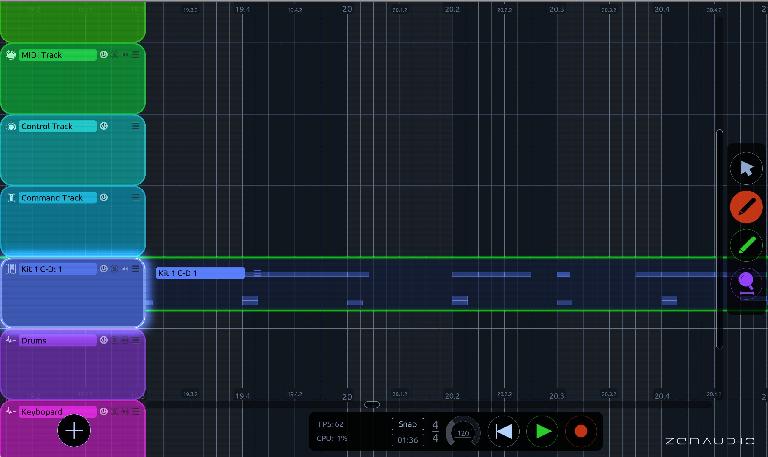 In Record loops, Play Loops are also available and work the way most of us are used to. Pre-recorded material can live there, already programmed into your songs including drum loops, MIDI loops, FX one shots and more. Because VST/AU plug-ins are supported as well, even guys like me who primarily rely on virtual instruments can use ALK 2 for live performance. Whoa, you mean I don’t have to be a guitarist or beat boxer, I can actually be a keyboardist?! 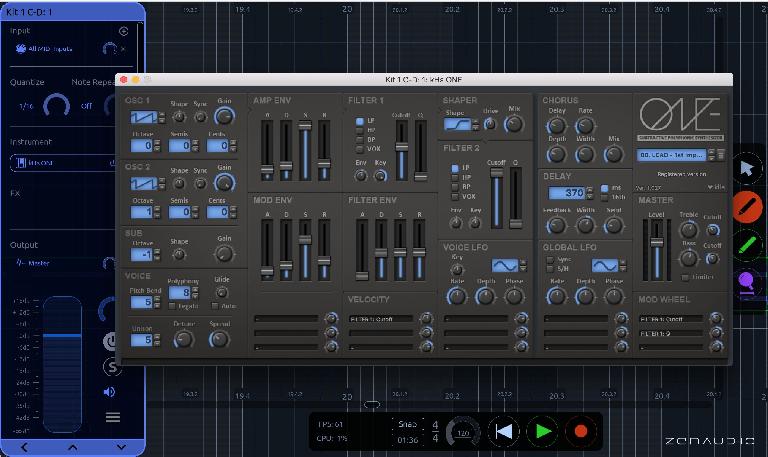 But there’s a hitch - there’s no MIDI editor, at least that I could find. You can record MIDI and you can record over MIDI. You can also import and export MIDI but there’s no editor. I can’t go in and move notes around, fix mistakes and so on. I guess Zen Audio figures you’ll do most of your MIDI editing in another DAW, then port things over when you’re ready. Still, being someone who tends to draw most of my beats, I would really like to see a working MIDI editor in the future. Especially with some kind of QWERTY MIDI controller option for my laptop keyboard. The current version of ALK2 really only allows MIDI Import or an active MIDI controller to input MIDI. Meaning currently that if you do not have a MIDI controller, you’re going to have a very tough time using ALK 2 for MIDI.

One feature I was really excited about in ALK2 was the ability to create tabs and use ALK2’s interface like a web browser. For example: I can drag the preferences window into the arrangement window, and it becomes an active tab running in the background that I can switch back and forth between. I can even drag plug-ins so that I always have quick access to synths, FX, and other plug-ins that I rely on. While this appears to work well in the videos, I had some trouble getting this to work. So I ended up just leaving that alone, and opening screens in the normal way. 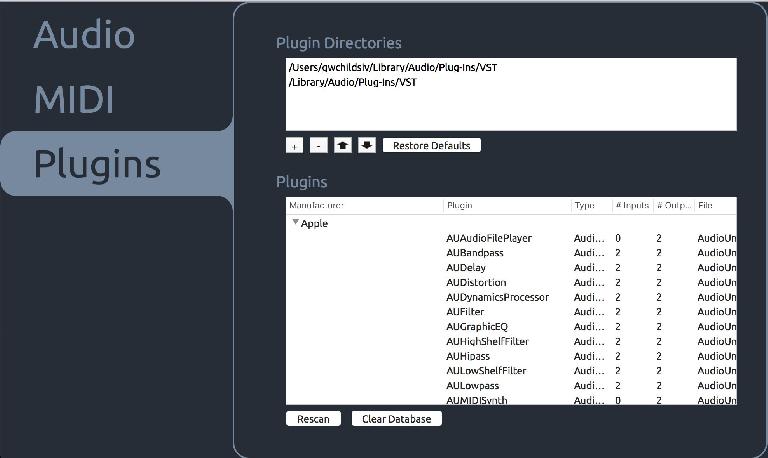 Unlike Ableton and most other DAWs, you can have multiple sessions within ALK2 open at once. It’s possible to copy and even drag tracks from one session to another though you definitely want to keep an eye on your machine resources. In fact while ALK2 was running the background with only one session active, I even noticed my CPU fans running pretty actively in the background while the program was doing nothing. This makes sense in that the graphics and overall imagery in ALK2 are very sleek and wonderfully vector based. You can zoom in in crazy cool ways, and everything is wonderfully animated.

A great potential feature of ALK 2 would be the ability to use a reference track. Let me explain: you could actually designate ahead of time a track to replace your mistake, should one occur during your performance. A pedal could be assigned to the reference track function / panic function. One simple tap and your screwup is switched out with something you preselected before the performance ‘just in case’.

ALK2 gives a wonderful glimpse into the future of live sequencing and recording. But even with all the colors, lights and features, it still feels like it’s missing more than a few important features. It reminds me of some of the earliest versions of Ableton in the sense that it’s a program that can do things other programs simply can’t do but it’s also missing a few things that all of the programs have. That being said, I do think ALK2 has the potential to grow in to something powerful. With the developers so keen at thinking outside of the box, I don’t think it will take long.

Pros: A sequencer that lets you pre-plan where you will record, as well as plan where the sequencer will play back your recording within a sequence. Beautiful interface, great UI management.