Language
French company XILS, in what must truly be a labor of love, has resurrected the VCS 3 modular synth, as the XILS 3, Joe Albano takes a deep look at their recent v2 update, now the XILS 3.2.

Many years ago, at the dawn of the age of synthesizers, British company EMS offered up a quirky little model called the Synthi (a.k.a the VCS3, or the 'Putney'). Now, this was a time when the synth world was still dominated by monophonic, modular monsters from the likes of Moog (and, in certain circles, Buchla), with the Minimoog and other compact models still just on the horizon, and true polyphony years away. Those brave enough to use a modular synth on stage had to brave the tangle of patch cables that connected all the pieces, but it was the price you paid for the kind of flexibility that was needed to coax those ultra-modern sounds out of these unruly beasts.

Enter the original VCS3, which was still a modular synth'"you had to connect everything by hand to get any sounds out of it'"but it used a pin matrix for those connections, instead of a traditional patchbay and cables, making it possible to have a modular synth in a small, easily portable format. Though not as widely known on this side of the Atlantic as it was in Britain, the original found its way into a lot of classic music, with bands like Pink Floyd and The Who (the organ part on "Won't Get Fooled Again" is a Lowery organ running through a VCS3's LFO-controlled Filter), artists like Brian Eno, and the BBC (Doctor Who), especially for special effects. It was particularly suited to that last application, thanks to its particular design and unusual envelopes (more on that below), and it had its own unique sound, quite distinct from the more familiar Moogs and ARPs that we Yanks were so keen on. That sound, along with the quirky design, and the modular connect-everything-by-hand aspect, made it the darling of more experimental types, but ultimately probably doomed it in the marketplace of Minimoogs and ARP 2600s, and eventually polyphonic synths.

Fast-forward to the present'"French company XILS, in what must truly be a labor of love, has resurrected the VCS 3, as the XILS 3, and the version I'm looking at here is its recent v2 update, now the XILS 3.2. 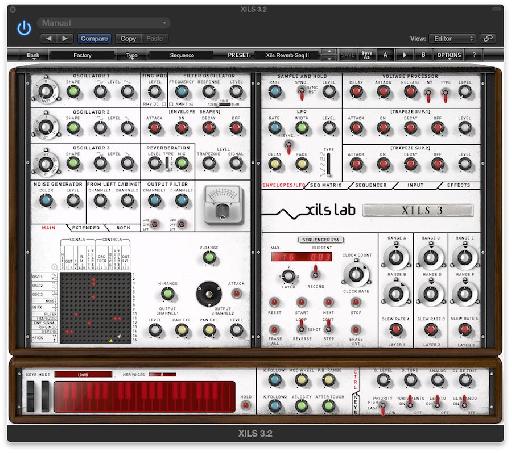 As a reissue of the VCS 3, it's kind of a hybrid. They've carefully recreated the layout of the original, including a virtual pin matrix and joystick, and put some effort into duplicating the specific quality of the oscillators and the filter, a big part of the original's 'sound'. But they've also brought the VCS 3 into the modern age with additions that any modern synthesist would want and need. These include options for polyphony, and a more traditional envelope generator, and some cool touches like being able to adjust the strength of a signal or effect that you've patched with the virtual patch pin itself, which becomes a swiveling depth control (a little triangular fader). 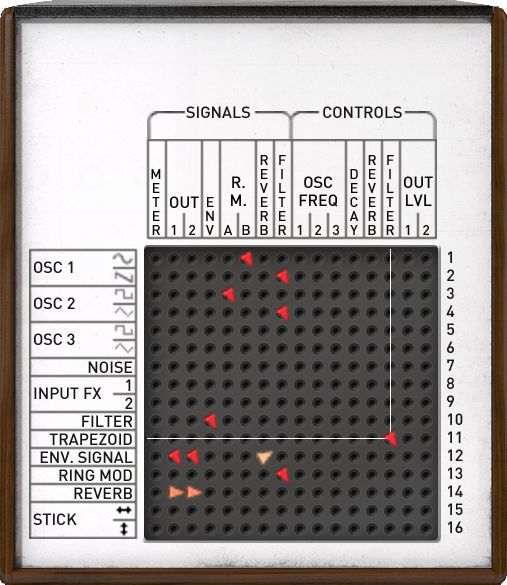 Version 2 adds some additional niceties, like improvements to the Filter section, the ability to zoom in on the pin matrixes (boy, is that a godsend!), and a new collection of presets, to show off the synth's capabilities.

The left-side panel is a pretty precise copy of the original layout (see Pic 3), with all the usual items, and a few less common one as well. 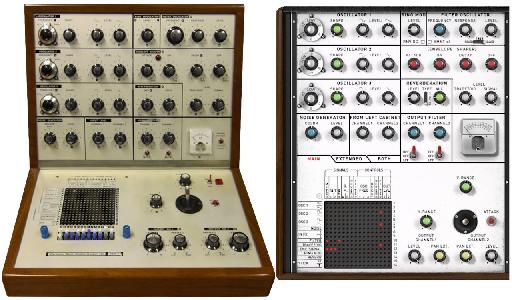 There are three Oscillators, with all the basic options (sine, saw, pulse, triangle), as well as a Shape control to adjust width (like pulse width, for example). Each Oscillator is really two'"the two waves have separate outputs in the pin matrix'"so it's really a total of six. The third oscillator can be turned into an LFO (actually, in the XILS 3, they can all be turned down to LFOs). There's a Noise generator (with a color control), and a Ring Modulator, which no doubt had something to do with the original's popularity for sci-fi effects. The Lowpass Filter has 12, 18 and 24 dB/octave slopes'"18 dB is the original type, if you want the sound to be closest to the hardware version. No real surprises here, except Resonance is labelled 'Response', but the sound of the Filter is one of the things that contributed to the real VCS 3'˜s unique voice, and the virtual version seems to share this personality. The original had a built-in spring reverb, and XILS 3 offers not one, but three distinct reverb sounds here.

The most unusual aspect of the VCS 3 was its Envelope Generator ('Envelope Shaper' here). Synthesists used to traditional ADSRs might not know what to make of it'"it's a Trapezoid envelope generator, and instead of the usual Attack, Decay, Sustain, and Release controls, it features Attack, On, Decay, and Off. With the Off knob all the way up (clockwise), Attack and Decay do as you'd expect, and ON functions as a Hold time adjustment (up to 2.5 sec). But if you lower the level of Off, the EG becomes a looping EG, with the Off determining the rate of the repeats'"sort of. It actually sets the time between repeats, so if you tweak the Attack, On, and Decay values to make the note longer or shorter, the repeat rate will also change accordingly. So you can get a variety of LFO-type effects right there in the EG'"another aspect that made the original lean toward effects more than music performance.

But XILS has wisely addressed the need of the modern user to be able to address the synth in a more familiar fashion, so the Trapezoid EG can be switched to a traditional ADSR EG by clicking on the name'"[Envelope Shaper] becomes [Envelope ADSR] (took me a while to fine that!)'"and now you're presented with the familiar ADSR layout, more amenable to creating playable patches.

Of course, the heart of all this is the Pin Matrix at the bottom of the panel. Actually, there are two matrices there'"one for the control and signal flow I just went through, and a second, to patch in the extras and effects from the right-side panel, which I'll go through in a minute, and external control sources, like keyboard, modwheel, and velocity. 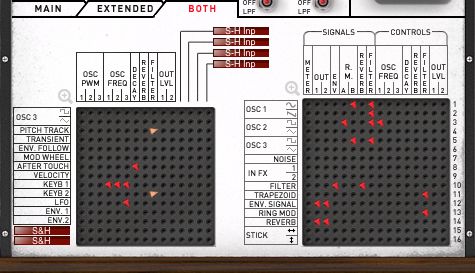 For those of us used to pre-patched synthesizers, it takes a minute (or ten) to remember that everything you do in the XILS 3 has to be patched. Want that Ring Mod effect?'"Down to the Matrix you go. Wanna run the oscillators through the Filter?'"Matrix. And don't forget, a re-routing like that means you not only have to route Oscillator to Filter, but also route Filter to the Output. XILS, in one of their helpful video tutorials, even points out a typical confusion'"remember, there are connections for both audio signals and control signals in this matrix, so make sure you're patching to the correct one!

Now, so far, everything I've described has been, for the most part, pretty faithful to the design of the original VCS 3. But the XILS 3 is more than just a remake of the VCS 3. While the left-side panel is true to the hardware, the right-side panel adds a host of additional features, the most prominent of which is probably a version of another EMS product, the 256 Sequencer. This is a polyphonic 3-layer sequencer, with enough features to fill a review on its own, and its addition is a big plus, especially for users who'll approach the plug-in looking for something like the classic sequencer lines it's known for (Ã  la Pink Floyd). 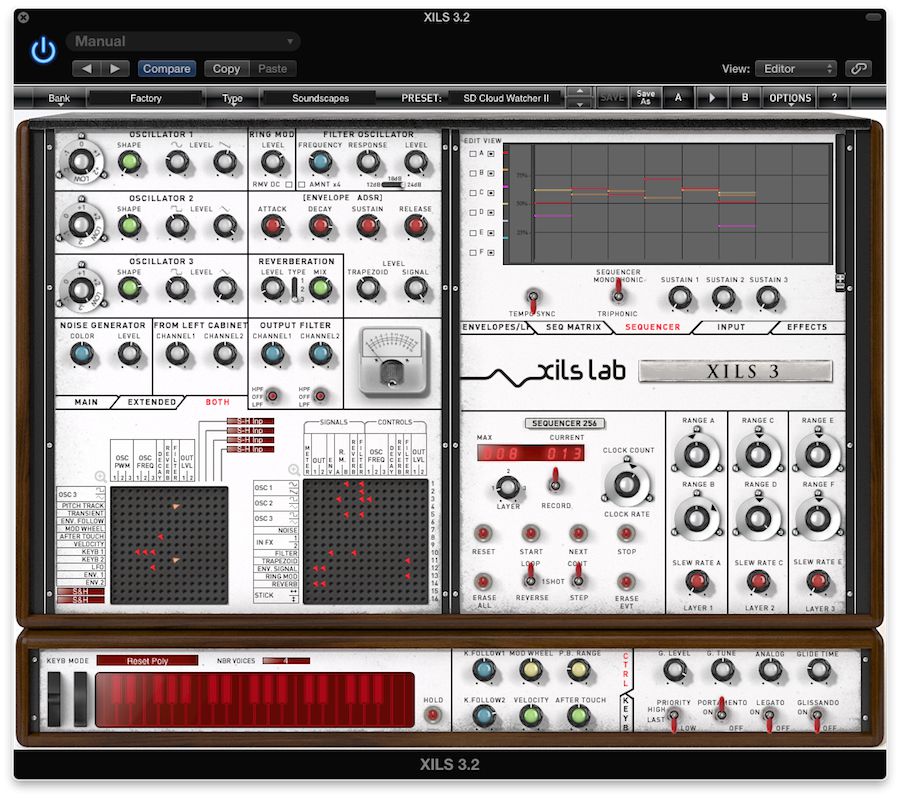 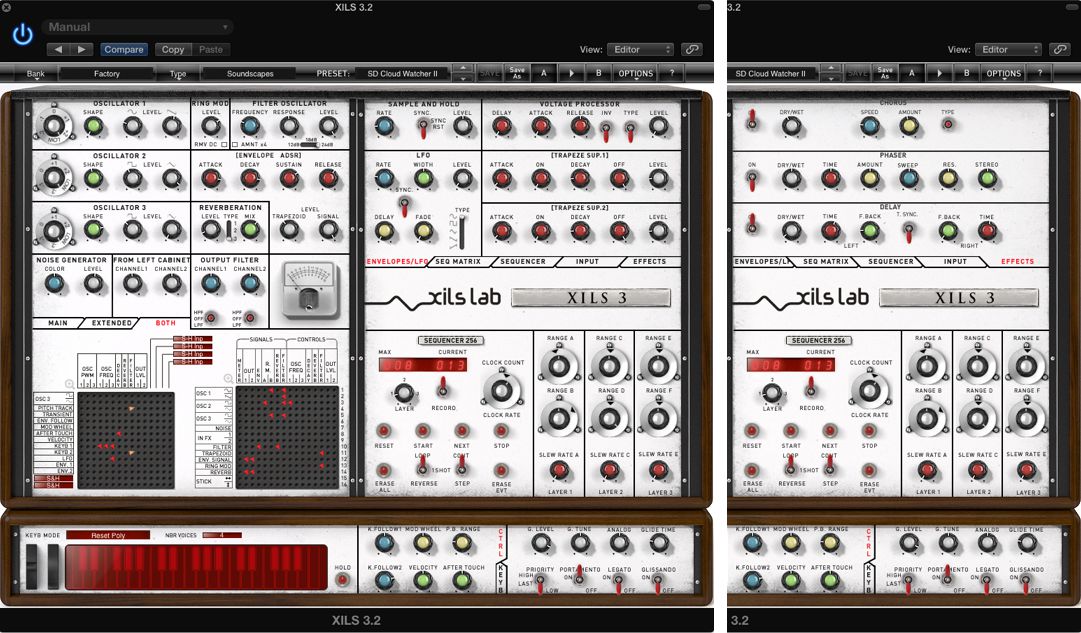 And an Input panel features a Gate, Pitch Tracker, and Envelope Follower, for times you want to use the XILS 3 as en effect unit, with an external sound source'"a popular application for the original as well. (In fact, one of the first things I had to try, of course, was to get the "Won't Get Fooled Again" sound, running an external organ through the Filter and LFOs). 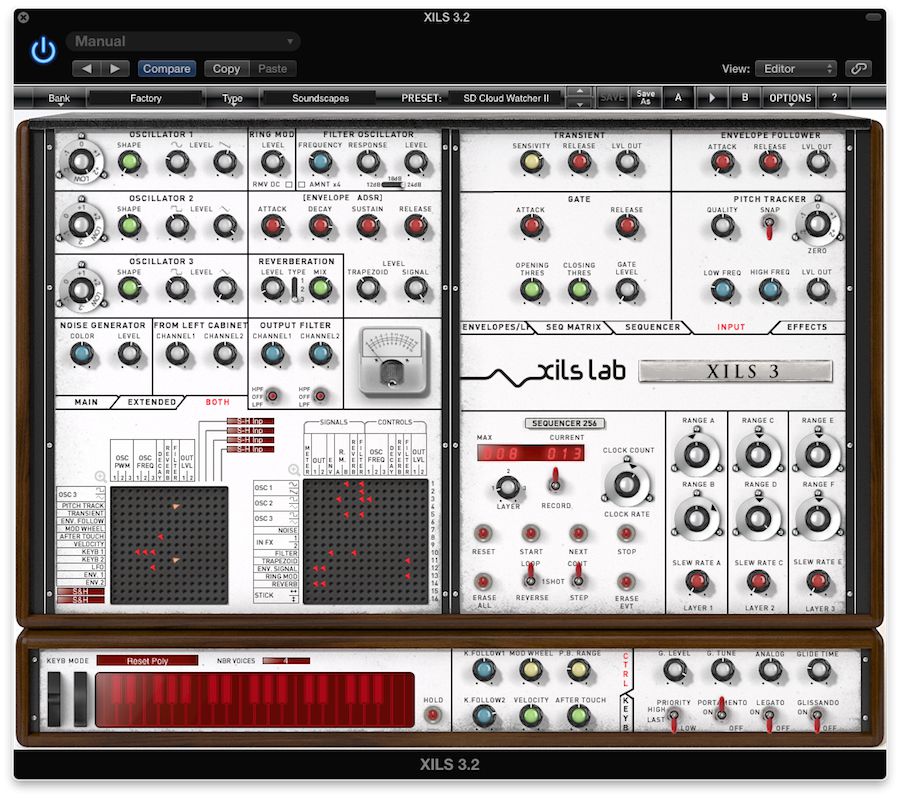 Pic 8 The Input panel, for using the XILS 3.2 as an Effects Generator with external sources

The XILS 3.2 used as an effects generator on an external source:

For this, the XILS shows up as 'XILS 3.2 FX' in regular (non-Instrument) plug-in menus, and I can see this as a primary application for some users.

There's much more'"so much more, in fact, that I need to stop here and conclude this brief look. In a world filled with models and emulations of all sorts of classic synths, not to mention cutting-edge modern soundmakers, does the XILS 3.2 find its place? Well, as an unrepentant old-school knob-twiddler, I just had a lot of fun with the XILS. Clearly, its primary audience is either people who remember, or know the reputation of, the original, and those do-it-yourselfers who love to make their own sounds from scratch, and would welcome the virtually unlimited flexibility of this synth (I barely mentioned the myriad patching options, and I didn't even get to the additional matrices!) But I think there's another audience as well, and that would be students of synthesis. People who are really trying to learn synthesizer layout and function from the ground up would find the XILS a great tool'"there's no better way to wrap your head around the signal flow (both audio and control) in a synth than to have to patch every connection, especially the ones we all take for granted! Back in The Year One, I learned synthesis on modular systems, and since then I've always quickly felt at home on just about any model or layout.

But XILS knows that not everyone has the time or luxury to roll their own sounds, so there's something there for the preset guys as well'" a comprehensive collection of (nearly 400) included Presets that cover a wide range of sounds and effects, and would also serve as a great starting point for customizing, or reverse-engineering a sound. 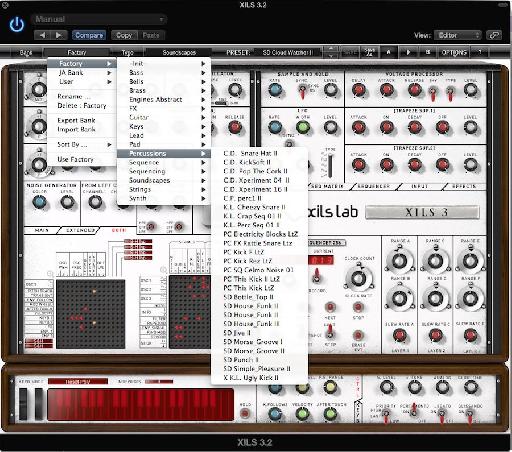 So, all in all, I think the XILS 3.2 would be a unique addition to any synthesist's toolbox, and a distinctive voice in many different applications. As I'm submitting this article, I see that XILS has just announced the XILS 4, the latest revision. Based on a EMS product-in-development, it's a combination of two VCS 3s, integrated into one unit'"as if the infinite possibilities of the XILS 3 matrices were not enough! If you're an inveterate tweaker, like me, or just want another unique voice in your arsenal, you won't go wrong with the XILS 3.2'"long live the Putney!