Language
With the handful of wavetable synthesizer plug-ins available today, is Xfer Records' Serum anything special, or just a massive carbon copy?

For those who aren't already primed in the wonders of wavetable synthesis, in place of generating sound using cycles of a single waveform like subtractive and FM synthesizers do for each oscillator, a set of waveforms are available instead. In Serum's case, a set can consist of up to 256 individual waves. You can then cycle through or dart around these waveforms which allows you to move through the table's spectral content. In its simplest form the set can be a spectral sweep from one tone to another, or at its most complex in the case of Serum, audio files can be loaded-in as Wavetable Sets for an infinite possibility of spectral change.

The most commonly known wavetable software synth of today is Native Instruments' Massive and we all know the sounds that it is capable of, in fact, so much so that some of its wavetables like Modern Talking have become instantly recognisable due to their broad, or perhaps over-usage. Although other powerful wavetable synths like Zebra 2 from u-he and Waldorf's Largo also use wavetable synthesis, it is Serum's large focus on importable and easily editable wavetable sets that makes this powerful tool more accessible to all.

At the Core of It

At the heart of Serum are two identical wavetable oscillators which include a large selection of analogue, digital, spectral and vowel based sets to work with. A Warp function allows you to manipulate the waveform by squeezing, stretching and creating lopsided (asymmetrical) changes as well. Frequency, amplitude and ring modulation are available here too but the customizable remap mode is a favorite as it allows editing for a customized warp behavior. Both oscillator's activity are displayed as waveforms in real time as you work which helps to visualize what this complex manipulation actually does. A third oscillator provides clean and classic waveforms for sub duties and can be routed through filters and effects or directly to the main outputs to be felt as well as heard in its cleanest form. A noise oscillator provides a large range of one shot or loopable samples from AC hum to kick and other drum like attack stages which makes punchy bass noises very simple to achieve. Custom audio files can also be saved to Serum's internal library which further expands its potential, adding a basic yet useful sampler for another aspect of sound design.

The Wavetable Editor is a welcome feature when importing and maximizing external audio material for sets which is normally a tricky business with other wavetable systems. Everything about the layout has been thought about so it's easy to maximize on imported audio as well as custom edit existing waveforms to then build your own tables. Like most sound editors there are various useful menu functions to streamline or experiment with the content of your sets along with a cherished undo/redo functionality to save you from yourself. Single waveforms can also be edited via a row of harmonic partials which anyone who's used additive synthesis will be familiar with. Couple this with the row below where every partial's phase position can be shifted and it becomes apparent that although there's a lot of complexity here, it's visually presented in a way that you can just explore without needing to understand the science. This being said, a mathematical formula box for creating waves or whole sets is also available should you be inclined'"we admit we mostly perused the provided list of interesting equations within Serum. We'll be sure to explore this sea of potential in the future'"right after we've studied our PhD in physics and built our space hyper drive. 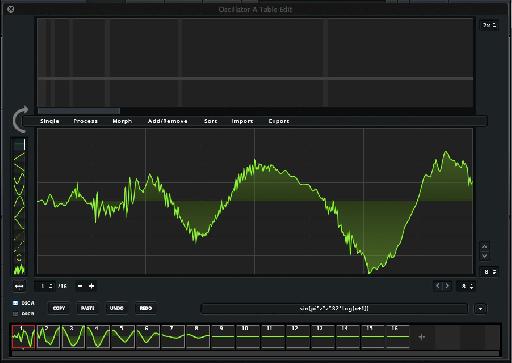 In the Wavetable Editor, a thumbnail view at the bottom shows you how a typical kick sound has been spread across the Wavetable Set. 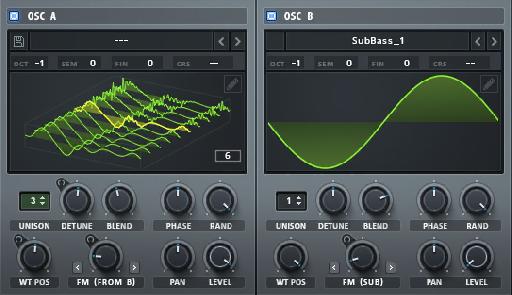 One click on the waveform view will show you the entire Wavetable Set in 3D (Osc A) with the current wavetable position highlighted in yellow.

Moving onwards in the signal path from Serum's oscillators, when it comes to processing, things are vast and a little bit different than many other synths you might already use. The first filter stage acts as a bridge between Serum's oscillators and the FX section (which also contains a duplicate filter). Aside from the Sub oscillator's additional option to route directly to the main outputs, all oscillators can be routed via this filter or directly to the FX chain, bypassing the filter stage entirely. Though many synths these days will sport two filters which allow for separate oscillator processing, working in parallel or series and so on, this isn't the case in Serum, though the filter options on offer are very impressive and in the case of its Multi filters, can offer control of two cutoffs, mimicking serial routing. The list includes 90 filter options which cover traditional styles, Flanges which cover comb filtering, phasing etc. and a Misc group. The last category has a wonderful French low-pass which even has a "Boeuf" control which does indeed add variable amounts of beef. Drive is available throughout which helps get the consistency in level you need for powerful filter work and most filters have an additional parameter which helps to move or further phatten up the sound.

The effects section includes Hyper/Dimension, Distortion, Flanger, Phaser, Chorus, Delay, Compressor, Reverb, EQ and Filter, but not in that order. In fact, effects can be dragged and dropped in any order, though parallel processing is only available through the use of each module dry/wet control. Like the 1st filter situation, this isnt as flexible as some other synths out there, but it doesn't seem to cause any major drawbacks in Serum's workflow and sonic potential. For filter processing on a per-oscillator basis, the best option is to stack 2 Serum's into one instrument channel within your DAW. 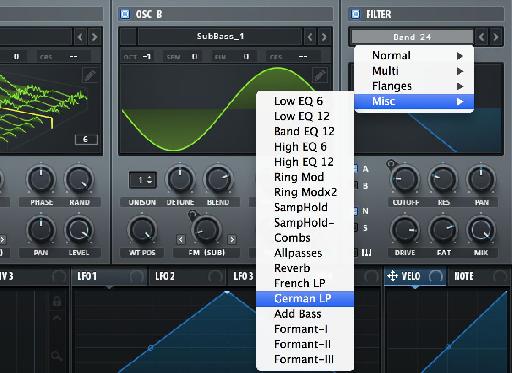 Both filters have the same vast range of types and the Misc section offers some very unique options.

The Distortion effect has a great range of characteristics and the X-Shaper options allow for customised wave shaping plots to be designed.

Modulation in Every Way

The reason why we've left it till last to discuss Serum's modulation capabilities isn't as an afterthought, it's actually because everything discussed so far can be modulated. Alongside its wavetable capabilities and filter options, Serum has possibly the best modulation system we've experienced in any synthesizer. This is due to its drag and drop approach to modulating pretty much anything from macros, envelopes, LFOs, aftertouch, velocity and so on. But as well as this Massive like drag and drop modulation, you can assign, or just merely tweak your modulation setting from a more traditional matrix view as well. We found that dragging modulation for experimentation for new sounds worked best, then we'd visit the matrix view for the fine tuning of everything as it's then in one neat list to see and work through, plus it has other great options like modulation curve control per assignment. FX parameters can be assigned which is essential to make use of the second filter and other modules for sound-design. Even the little octave, semitone, fine tune and coarse pitch number parameters above each oscillator can be modulated which is a pleasant surprise.

The next great aspect of modulation is the editable nature of the LFOs, these are pretty much breakpoint based shapes which makes them easy to customise to a high level. The only thing we would like to see in a future update is the easy shape tools from the Wavetable Editor being implemented here so we can easily program rhythmic modulation like Massive's Performer LFOs. For now, Shift-click allows you to create steps based on a variable grid which can then be modified further, manually.

The velocity curve (right) is just as flexible to programme as the LFOs (left). This makes it easy to create dynamic and expressive instruments for performance.

Chaos modulators 1 & 2 allow you to add randomisation to any parameters you wish so Serum can behave more like an analogue synth.

From our first use onwards with Serum we felt comfortable using it, no chin scratching happened unless it was to appreciate our efforts but we have to say it's apparent that some real thought has gone into every aspect of this synth's GUI as there are no niggles or bugbears in sight. Sonically the oscillators sound incredibly clean and the unison modes are great yet CPU hungry as most are. We designed some really strong bass and leads sounds and loved developing our own wavetable sets to push for original and twisted instruments. The power of Serum's approach to modulation shouldn't be underestimated and we see lots of potential in its name being commonplace in live performance set-ups as well as in the studio for this reason. We've been impressed by so many aspects of this synth that we still get shocked when looking at its price tag. Serum feels like a tool that has already forced a space into our sonic arsenal and we're pretty sure that after a demo, you'll understand why. 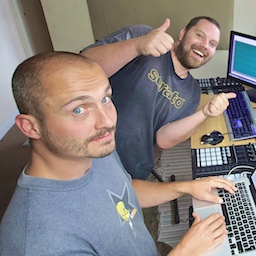 Colo[r] is the pseudonym of Chris Pearson and Liam O'Mullane who together share a strong history in electronic music production and live performance. Chris' history in drum & bass covers releases on Ram Records, Renegade Hardware and Dispatch Recordings to name a few under the guise of Chris Octane of Octane & DLR and Cymatic. Ch... Read More