There are plenty of modules out there that affect CV, and there’s also quite a few audio effect modules, but there are not many that process audio in a way that results in 8-bit madness. Aside from processing audio, Drezno is a binary conversion computer for your Envelopes and LFOs, when you patch either signal into the ADC (Analog to Digital Converter) you can use the DAC (Digital to Analog Converter) to process your signal.

There’s a slider to set the gain of the incoming signal as well as one to set the gain of the outgoing signal, so we have a lot of control over incoming and outgoing indicators. The offset slider indicates if our signal is clipping, which is an interesting and thoughtful touch and gives us visual feedback in unlit environments. This also means we can use Drezno as a complex bitcrusher by sending audio into the ADC, processing it, then sending it out of the ACD.
Binary codes denote voltage values by using patterns of binary symbols, which on Drezno are referred to as ‘bits’. Bits are defined by order of most significant to least significant. 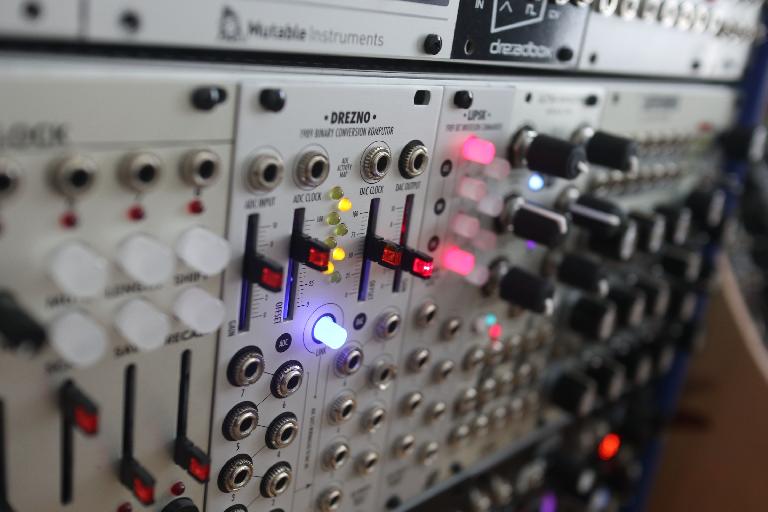 So now that we’ve looked at the upper part of the module we can get to the ins and outs. At first glance this module can be a bit intimidating, because there’s nothing else out there like it so it’s hard to compare it to another module when looking into its features and the way it works. I myself have never interacted with a module the way I have with Drezno. That being said, once you get the hang of it, it’s a really deep module in the realm of processing.
One way of using it is to plug the bit outs of Drezno into its bit ins - by doing this you can connect bit after bit and get different results for each patch. For example, you can patch Bit 1 into 3, 5 into 4, 2 into 7, and so on. Bit 0 results in the subtlest effect, while bit 7 results in the most radical.

With an 8-bit modular synthesis system, individual bits are characterized as gate signals and consequently these are converted into eight gates by the incoming analog voltage. If you have an oscilloscope you can see the changes being made to the signals every time you patch or unpatch. Alternatively if you have the expander, Lipsk, you can flip bits around by turning the buttons ON and OFF, but more on that later. Drezno can either work entirely independently or be divided into two sections. We can send audio or CV signals into the ADC input that are processed through the DAC outputs with bits 0-7. 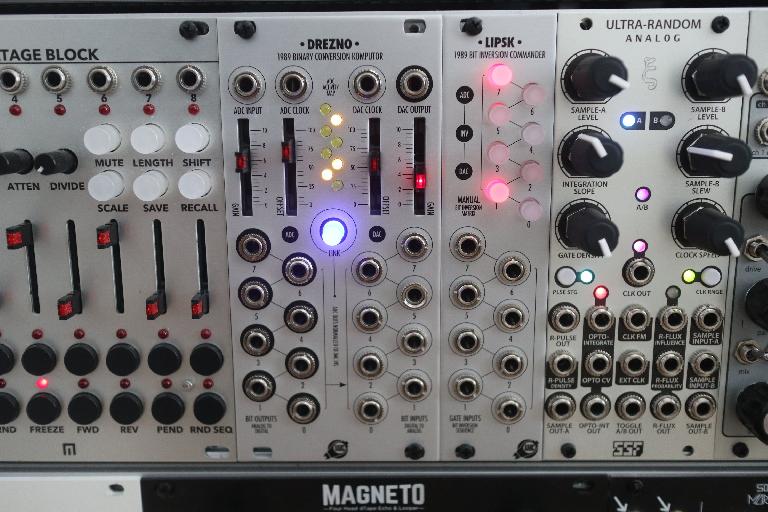 So we talked about Drezno being an audio processor, and it’s great at that, but we also have the ADC clock and DAC clock inputs that can be used for sample rate reduction. If you’re feeding Drezno a clock lower than audio rate it will work similar to a Sample & Hold. For example, if you feed a pulse wave into the ADC clock input you can control its sampling rate. The ADC clock input allows you to disregard Drezno’s internal clock - it does so by freezing the output code while the input signal is expanding.

The little yellow lights imbetween our clock inputs let us know how the ADC output is being affected. The DAC clock input anticipates gate or trigger signals and is normalized when using Lipsk - this way Lipsk can override any signal patched into Drezno. Bit outputs can give you interesting gate sequences, and if you want to have a continual rhythm you can use different shapes of LFO signals synced to external clocks as audio inputs and multiply that clock into the ADC clock input. By sending different ADC clock multiplications you can achieve more complex shapes of LFOs going into the ADC input, and this will result in even more interesting rhythms. The higher the multiplication the higher the tenacity of the given rhythm. 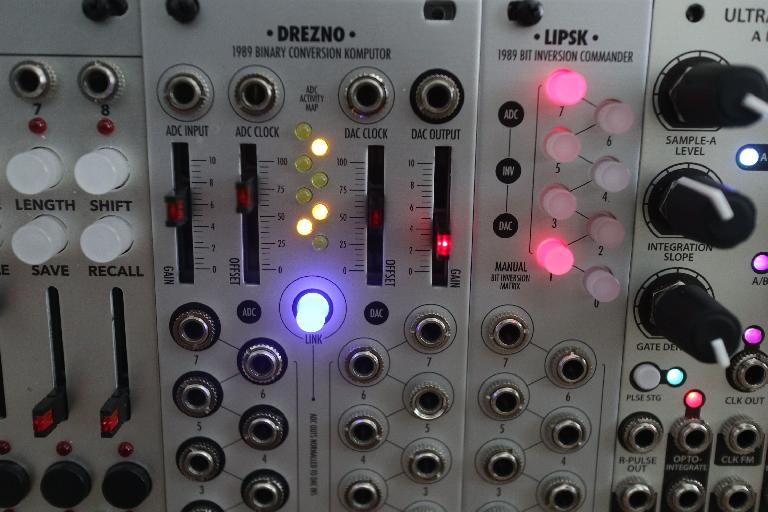 Now that we’ve taken a deep look into Drezno by itself lets talk about how Lipsk makes everything much simpler. First off, you need to connect Lipsk into Drezno via the back ribbon. Unfortunately, Lipsk still will require its own power source, as it can’t take enough power through Drezno to function correctly, so keep that in mind if you’re working on a smaller case where you’re constantly counting your ribbon slots!

Once you have Lipsk plugged in and your case turned on there’s a button in the middle of Drezno labeled ‘Link’, and once you press that it turns blue which indicates that you no longer have to patch Drezno, you can flip bits manually with the little buttons on Lipsk. By not having to patch and unpatch Drezno every time you want a different result it gives Drezno a more hands-on ambiance, ultimately giving you a more user friendly way of interacting with the bits. Below the manual bit inversion matrix you will find 8 gate inputs, making it easy to send CV, clock, or gate signals into Lipsk, freeing your hands to concentrate on other things in your patch. 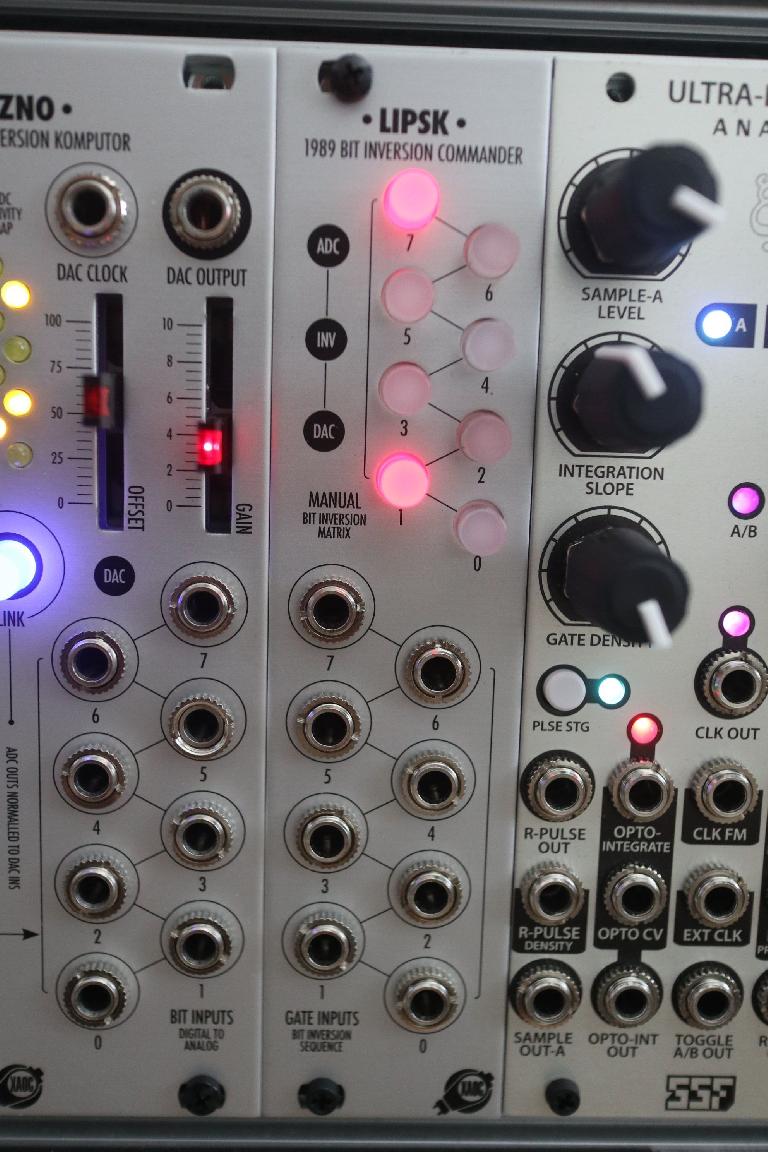 So how else can we use Drezno? We know it can generate trigger patterns by feeding LFOs into the ADC, we also know we can use it for bit reduction and bit crushing. But there’s a few other things we can do with it like use it as a frequency multiplier by feeding a continuous waveform into the ADC. We can also create interesting wave shapes with the DAC output by introducing various gate signals into the DAC inputs. And lastly it can connect to other logic modules, meaning even more manipulation can be achieved with two Drezno modules.

If you’re looking for a module that’s like no other and want to have a tiny Binary Conversion Computer inside your modular synthesizer, definitely consider Drezno & Lipsk.