Language
If you make audio or music for games, then you may be aware of Wwise by Audiokinetic. It's a middleware solution and Gary Hiebner explores how it can enhance your game audio productions.

If game audio is where you want to be, you'll need to look at one of the audio middleware solutions that are available. The one I particularly like is Audiokinetic's Wwise. You may be wondering what is middleware? In its most basic explanation, audio middleware is a tool that manages your audio assets that will be used in a game and integrates them with the game build.

What I like about Wwise is that it's a feature-rich audio middleware solution. At first glance, the interface looks quite daunting as there are many menus, submenus, and folder structures. But once you get familiar where all these locations are, you'll realize how powerful Wwise is. Let's look a little closer at Wwise and clear up the mystery around audio middleware and how it's used.

How it works with Wwise is that you'll import audio assets for your game into Wwise. You'll then create events for these sounds so that the game knows how these sounds will react in the game. For example, maybe you want a specific win sound to play whenever a treasure is found, or maybe as you move into a space like a room, you want the fan noise to play as you walk under it. These events are all created within Wwise.

Why this is so beneficial is that as a sound designer, you will have a better understanding of how you want the sounds to work in the game. So you can use a tool like Wwise to program in how these sounds work in the game, and then pass this onto the developer. This alleviates extra work that the game developer needs to do with the sound and helps with the game build workflow. So that's Wwise in a nutshell. Let's see what other nifty things Wwise can do. 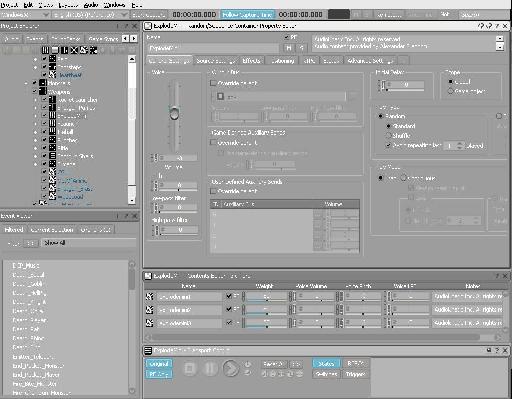 First off, Wwise is free to use for evaluation and non-commercial purposes such as creating game prototypes, developing freeware and for academic projects. The limitation here is that you can only use up to 200 audio assets in a project. If you're an indie game developer with less than 200 audio assets, you can use Wwise for free for Windows, Mac OS X, Linux, iOS, Android and Windows Phone 8 platforms. If you need more audio assets and are working on other platforms, and for other purposes than mentioned above, then you'll need to look at the licensing options on the Audiokinetic website.

In Wwise you add your audio assets to the Audio folder, and then you can create events for these audio assets and assign them to the event. This way the game will know when to play these sounds. 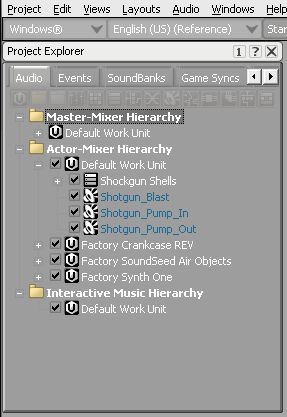 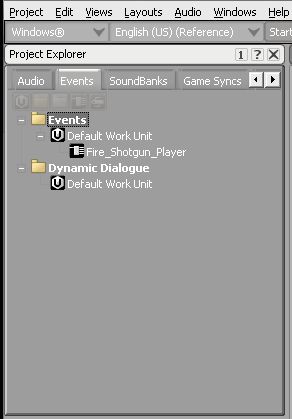 Wwise gives you flexibility when working with your audio assets. You can make volume adjustments and even add in pitch and filtering to the sounds. These will be nondestructive and are only applied through the audio engine. Your original sounds are still retained. 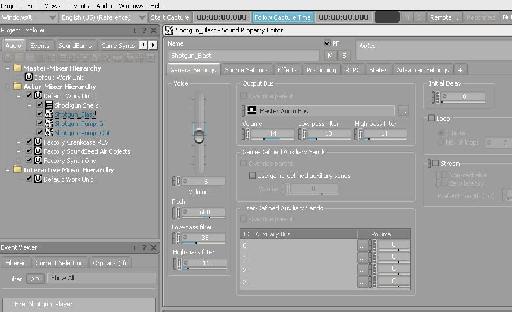 A great feature on Wwise is the random container. What you can do with this tool is choose a few sounds, and then randomize them with Wwise's randomizing functions. 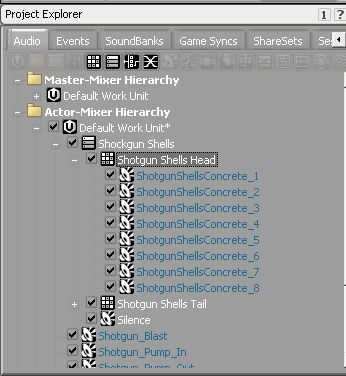 With the random container, you can choose settings so that it shuffles through the sounds, plus that it doesn't repeat the same sound as much. This adds interest and realism to your game audio, and the player won't recognize the same audio samples being played over and over, making it less likely that they'll get bored by the same sounds.

You can even randomize the pitch of each sound, adding even more variation to them. 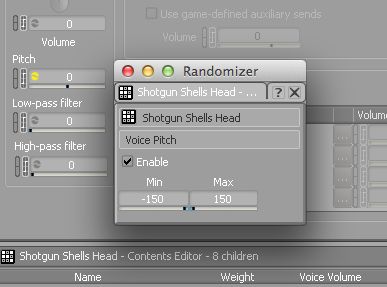 Plus you can even add extra effects that are bundled with Wwise to further enhance your sounds. 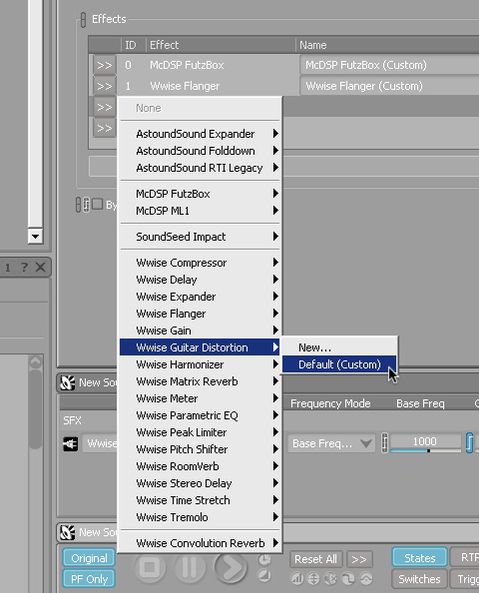 In Wwise, you can create game parameters that change sounds depending on different data that the game engine receives. One of Wwise's most handy game parameters is the Real Time Parameter Control (RTPC) feature. As you can tell from the name, this parameter will change the sounds in real time in the game. So for example, you could add a volume fade out to sound so that when you walk away from the object the sound fades out. This is a very simple example, but you can set up way more complex RTPC's depending on what is happening in the game.

In this example, the player's health (the sound of a heartbeat) drops in volume as the health decrease. A low-pass filter also cuts out higher frequencies as the health drops. So as you can see, you can set up multiple RTPC parameters that change in different ways depending on the game state, giving you much more flexibility with your sounds and how they adapt over real-time parameters.

What's great about Wwise is that you can install it on Windows or Mac. And when it comes to game build time it supports various platforms such as Windows, Apple, Xbox, Playstation, etc. For an extensive list on all the supported game platforms take a look here: https://www.audiokinetic.com/products/supported-platforms/

One of the more important aspects of audio middleware is the audio signal flow and the mixing of these sounds. With Wwise, you can apply audio summing to your sounds, so when 10s or even hundreds of sounds play at the same time, there isn't any audio clipping and distortion. 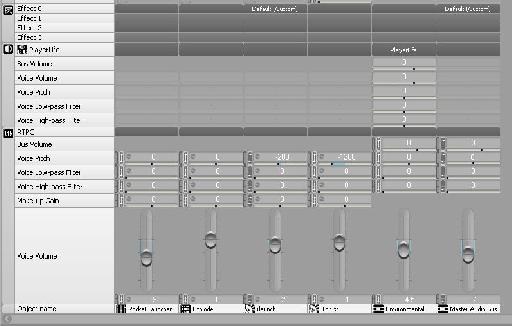 Even better is that you can create different buses, and control them with a MIDI controller. When you use the Soundscaper tool included in Wwise, you can test out how audio assets sound against each other when they are triggered at the same time. Wwise has introduced the use of MIDI in their application. You can use their bundled sampler to load up audio samples and then program in MIDI to trigger these audio samples playing different keys.

Or you can use the synth to generate waveforms, which can then play MIDI sequences. With the introduction of MIDI, you can cut down on audio assets and resources. For example with mobile games there are limitations to the amount of sounds you can use, so with MIDI you can reduce the amount of sounds used by using the MIDI features to generate sounds. 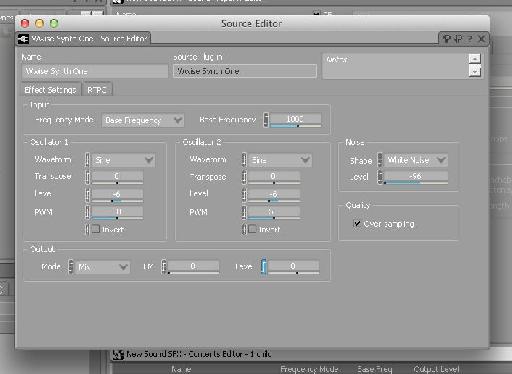 Wwise gives you great control over your audio and the file size of your audio assets. It allows you to quickly and easily reduce the size of your audio by saving the assets out as different formats, plus reducing the sample rates. As you can imagine with all the new mobile media, you have many file size restrictions. With Wwise, you can see how many resources you are going to use with your audio, and if you need to reduce it by changing the file format, it'll recalculate how much resources you've saved. I find this a real timesaver instead of having to jump between Wwise and an audio editor to convert the audio formats. 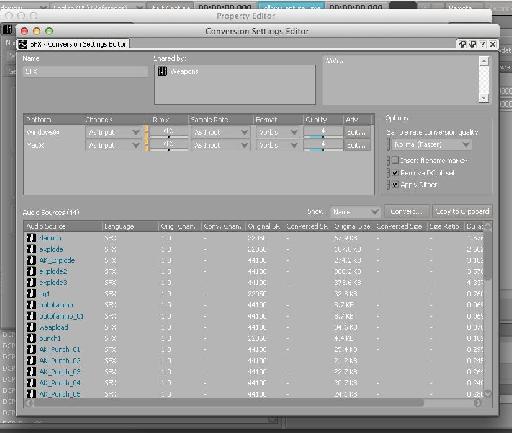 So that's really just touching the surface of Wwise, but hopefully these features entice you to look further into Wwise and explore how it can benefit you as a music composer and sound designer for games. Give Wwise a try and see how it can help improve your game audio workflow.