Arpitecht is a voltage controlled quantizer and rhythmic arpeggio generator for eurorack systems. Sara Simms fired it up and found out what it could do.

The Arpitect is one of WMD's new modules that's designed to be an inspiring musical tool for the modular musician. I was curious about how it worked, and what types of musical patterns it might be able to generate. I tried out the Arpitect in my studio during a few jam sessions with my semi-modular setup and found it to be a fascinating device. Here's what I learned... 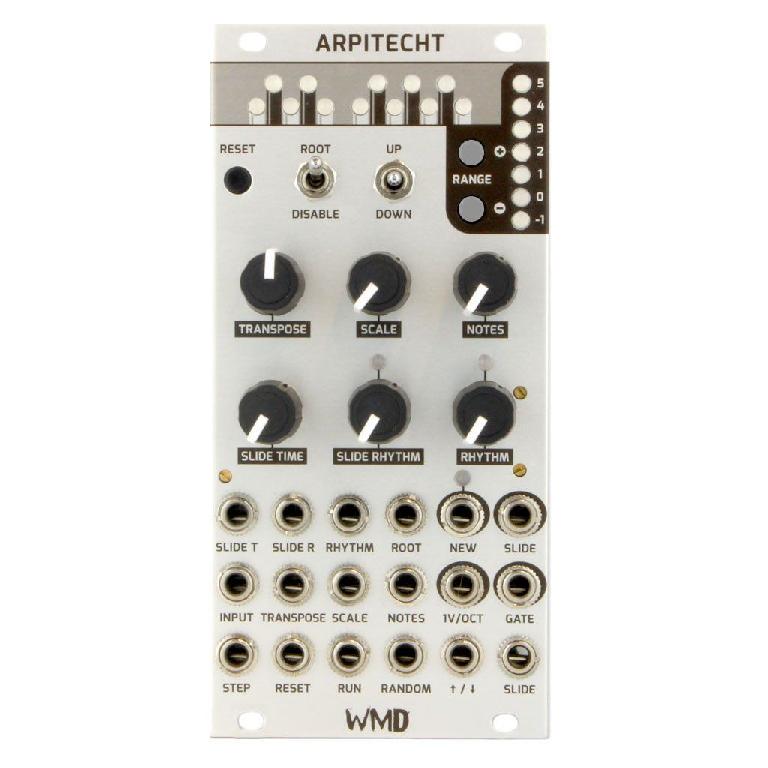 The Arpitecht is a single module; it's an advanced Eurorack user's piece and needs to be housed in a Eurorack case. The Arpitecht is a voltage controlled quantizer and rhythmic arpeggio generator. It can be used to create melodies, sequences, and generate acid-sounding lines.

On the faceplate of the Arpitect are LED lights that represent the white and black keys of the piano and the octave range. Below this is a Root/Disable switch that allows the root of the scale to be dropped from the sequence and an Up/Down switch that changes the order of the notes.

In the middle of the module are rotary knobs for Transpose, Scale, Notes, Slide Time, Slide Rhythm and Rhythm. If the Notes module is turned to the left, all the notes of the selected scale will play. As the Notes knob is turned counter-clockwise fewer notes play. The Scale knob allows users to select one of sixteen scales ranging from major to chromatic. Transpose moves the sequence up 12 semitones and turning this knob counter-clockwise transposes the sequence down 12 semitones.

The Rhythm knob selects one of 32 built in gate sequences, while the Slide Rhythm selects one of 32 slide rhythms and is capable of creating acid-like sequences. Lastly, the Rhythm knob selects between one of 32 built in gate sequences. The bottom section of the Arpitect features a patch bay that allows users to patch in and out of a modular setup. There's eighteen patch points available for many creative uses! 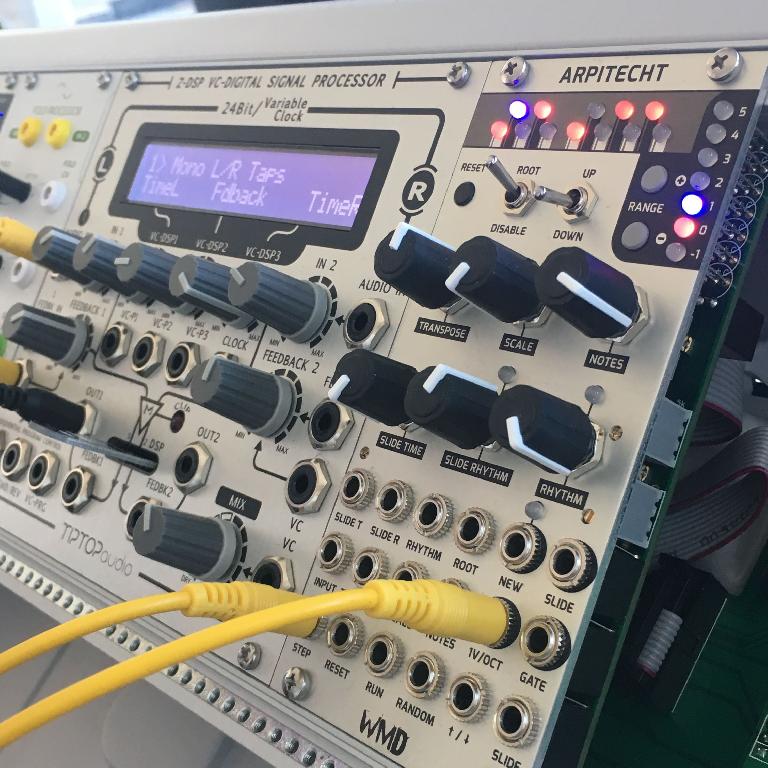 In order to make music with the Arpitect, a clock source and sequencer is needed. I experimented by patching my Telemark synthesizer and Oberkorn sequencer by Analogue Solutions into the Arpitecht. To get started making sounds, I began by using it as quantizer for the Oberkorn. I patched the CVA out of my sequencer into the Input on the Arpitect and took the 1V/Oct out of the Arpitect and patched it into the pitch input in the VCO section on my semi-modular. I started with a C major scale on the Arpitect's LED keyboard display and changed scales until I reached the aeolian minor scale. I ran the sequencer and chose my notes on the sequencer, and experimented with turning the Notes knob and listened as notes fell away. I was able to generate musical sounding passages and had a lot of fun patching the Arpitecht into my synthesizer.

Here's a video by WMD that explains how to use the Arpitect as a quantizer:

The next experiments I tried were a little more complex, and involved patching the Roland TR-09 Trigger Out to the Step input on the Arpitecht. I took the 1V/Oct and ran it into the pitch input on my synthesizer, and the Gate on the Arpitecht to Gate input on Telemark. This time I experimented with starting with the Rhythm all the way to the right, turning counter-clockwise over time. As I turned the Rhythm knob down, I turned the Slide Rhythm knob up and created some interesting acid-like sounds! 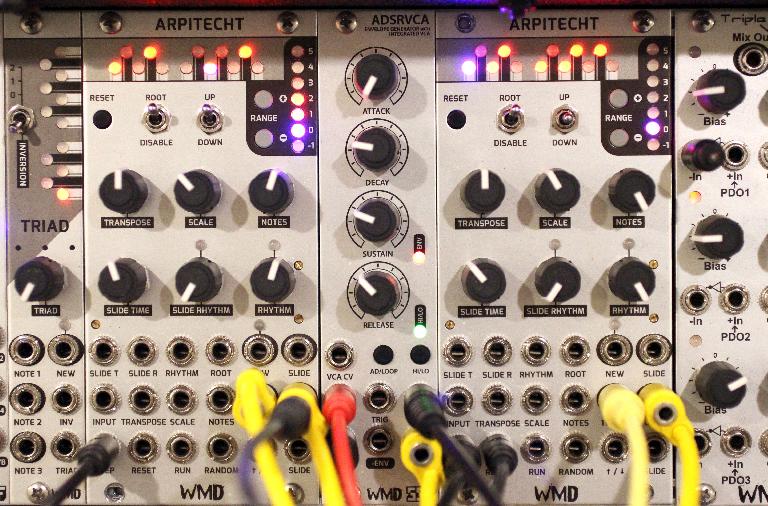 The Arpitecht is a very interesting tool that adds a musical dimension to the modular world. It's especially useful if you have a musical background and understand music theory. The Arpitect is an advanced module and has a definite learning curve to it. However, if you're willing to spend some time using it, you'll find its capable of generating a multitude of cool sequences. These sequences can be used in tracks, or would sound good on their own as part of a live set paired with a drum machine. The Arpitecht is an amazing module that would benefit producers and musicians who are interested in making music with modular synths. A very innovative module indeed!

Pros: Notes and Scale Functions. Can be used to generate original lines. Capable of generating acid-like sounds. Adds a musical element to modular.

Cons: Moderate learning curve, especially for those new to modular. Only a few videos available about how to use it. Requires a clock source and sequencer/synthesizer to be used, so there's a few units that you'd need to invest in or rent before you can try it out.