Language
Abbey Road Studios is famous amongst other things for the sweet double-tracking vocals effects on The Beatles records. Now Waves bring that feel to your studio with Reel ADT. GW Childs checks it out.

Reel ADT is an amazing new plug-in from Waves and Abbey Roads Studio that seeks to, the way Ken Townsend remedied for the Beatles, supply you with a quick, easy alternative to hours of double-tracking vocals.

Like many of the Waves plug-ins, they give you several versions of Reel ADT that serve different purposes. These versions are known as components (Mono, Mono to Stereo, Stereo), and they truly assist in adding to Reel ADT's versatility. They even include a second ADT module that allows you to add in even more modulation. The latter intrigued me quite a bit. So, to start off, I used the Mono to Stereo version with the doubled ADT on a bass synth track I was working on.

By default it sounded quite nice, but you've got to try out some presets, right? You'll be happy to know that presets intended for vocals, as well as guitar and pads, have already been thought of by the Waves preset designers. And, these patches go a long way in showing how lush Reel ADT can make pretty much anything. I built up a patch from the Creamy Bass preset that is supplied with Reel ADT. 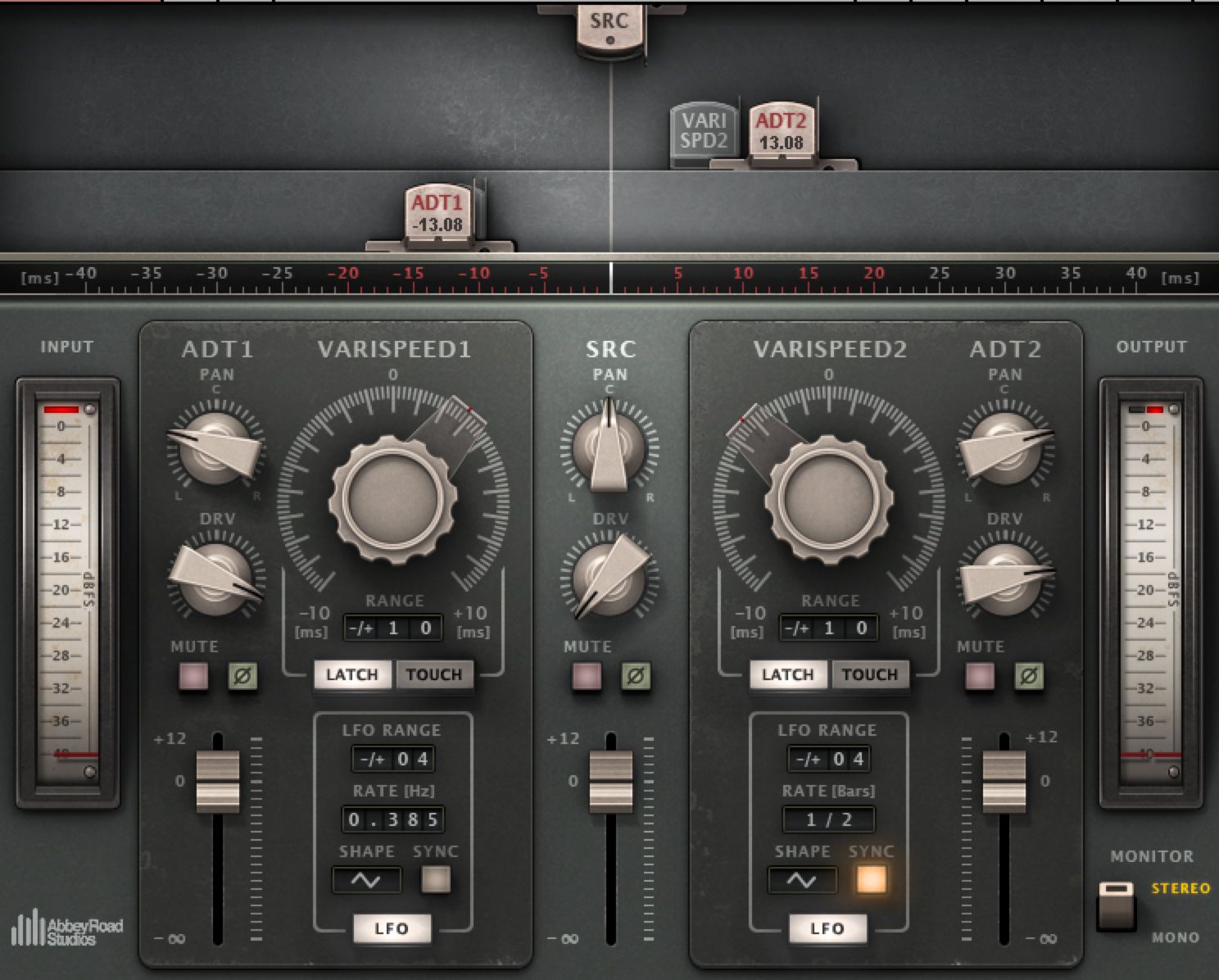 How Does it Sound With Instruments?

True to form, my bass sounded much bigger and filled up the mix quite nicely. As Reel ADT's got LFOs, especially with the 2 ADT version, you can get some sick modulation that you'll have a hard time replicating elsewhere.

Like the original equipment, those being two reel to reels, you have the capability of putting Reel ADT into Touch mode, which will allow you to do what the Beatles did, and modulate by hand, by adjusting the Varispeed, which adjust the simulated speed of the Artificial Double Tracking (ADT). This is extremely cool, as you can automate speed variation specifically for certain parts in your song for some extremely unique modulation that isn't quite like anything else out there. 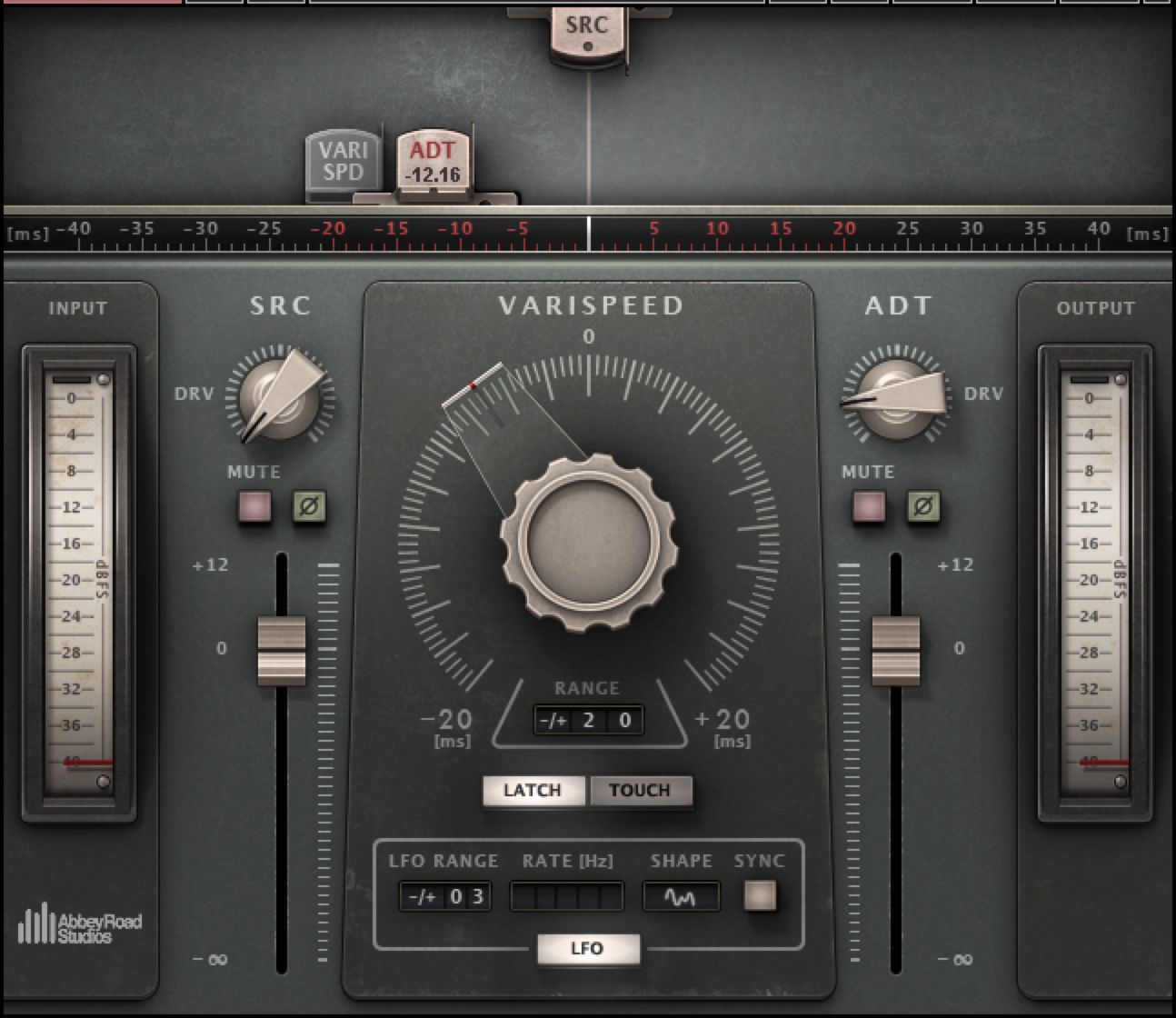 Vocals are definitely where Reel ADT does shine the brightest. Though, you can rest assured, you're going to use it on instruments.

The first thing I tried was overdriving the vocals by raising the dry signal, coming into the Source channel. As there are dedicated Drive knobs, this isn't really that hard to do. With or without drive, there is an analog warmth that is added when you use Reel ADT that does appear to smooth out the 'details' in a vocal session, much in the way that a filter in Photoshop will smooth over lines, skin and other annoying details that you'd rather not focus on in a picture.

Once ADT is added in, and proportionally separated from the Source channel, a depth is added that only really well done double-tracking can provide, or an effects unit that is usually well outside of the price range that most of us want to spend.

Feeling pretty hip-hop, I panned the source channel to the left, and the ADT channel to the right, a technique that is used quite a bit for rapping. This was about the point that I realized that Reel ADT had become a part of my regular lineup of plug-ins for as long as I can keep it on my computer. 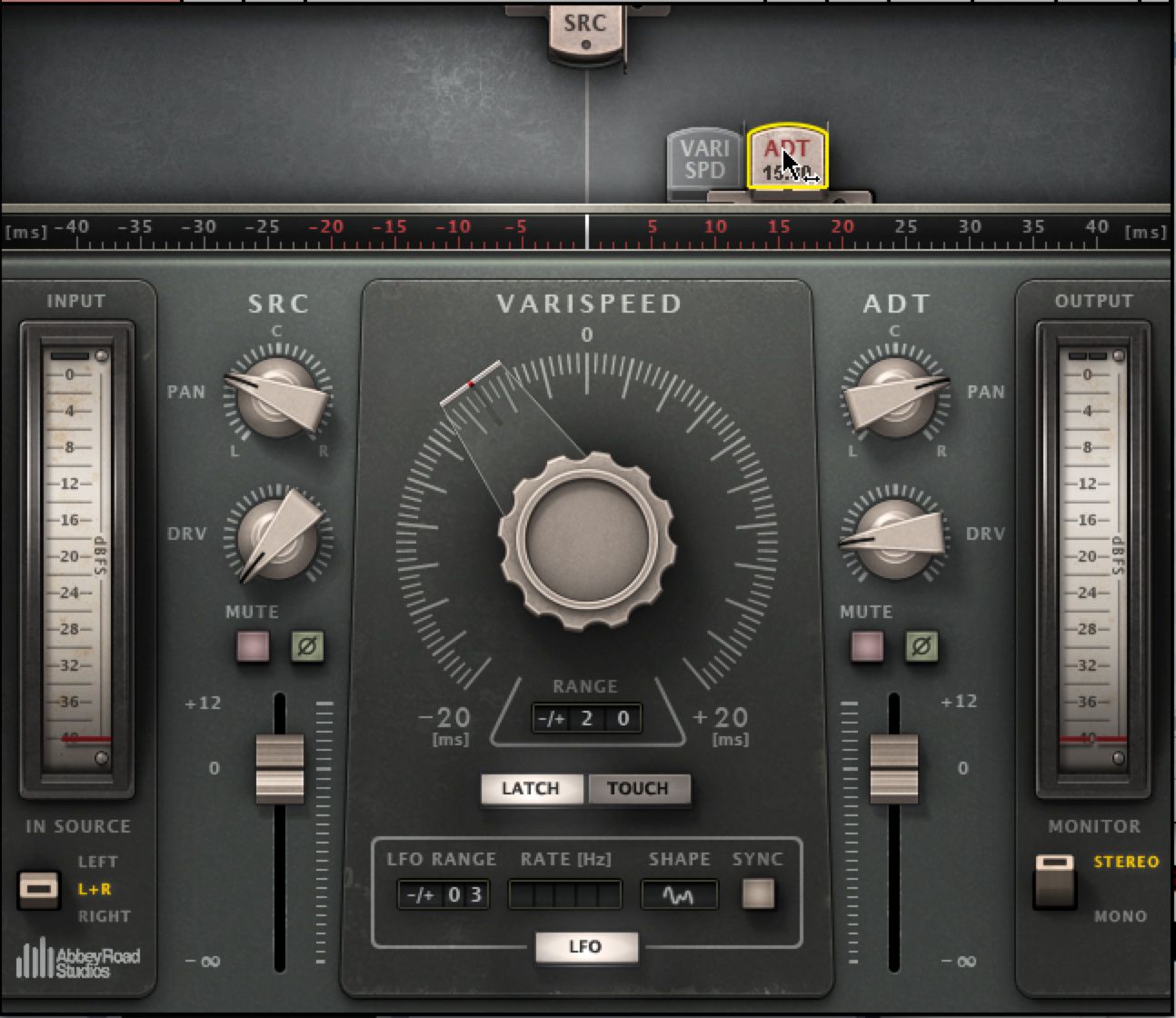 As a singer/songwriter on a limited budget, I felt that Waves Reel ADT captured something that I have been looking for, much like the Beatles. There's no dispute that vocal doubling is tricky, and only really works when the second recording really matches the first. Reel ADT is a very suitable workaround, while at the same time becoming sort of an indirect suite of effects that can be found through experimentation. It almost reminds me of something Propellerhead would have thought up, as the interface feels so much like hardware. They even provided MIDI control for Varispeed!