The new F6 Floating-Band surgical dynamic EQ plug-in from Waves can be used for a wide range of applications '" and it's more affordable than you might be expecting.

EQ. It’s one of those things where some people just stick with the one that came with their DAW. That might be fine, but there’s a reason there are so many third-party EQs around and it’s because sometimes, more depth and detail is called for. The latest of Waves’ highly affordable plug-ins is the F6 EQ, which naturally comes in all major formats and like the company’s other plugs, is downloaded and authorised via the Waves Central application. 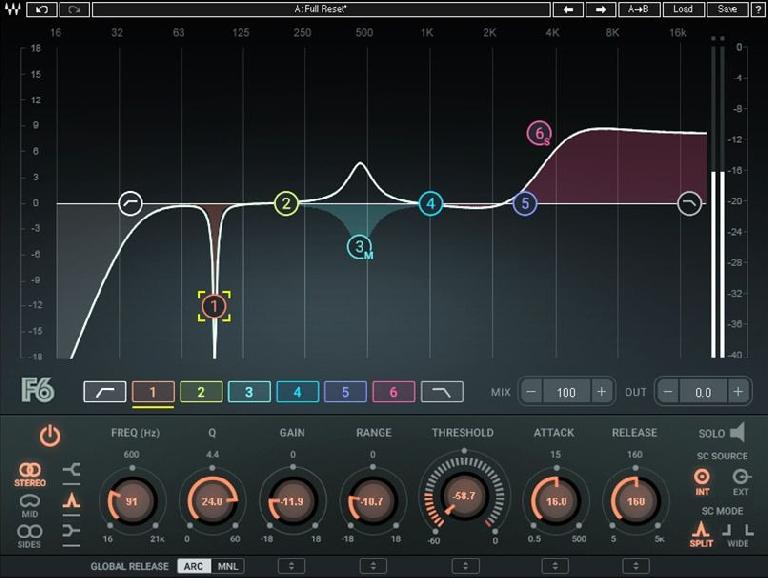 The F6 is much more versatile than a run-of-the-mill EQ plug-in. For a start, its six bands are free floating and can be placed anywhere in the frequency spectrum, even overlapping, with high and low pass filters at either end. It works in stereo, mid/side and parallel modes as well as supporting sidechaining, and is touch compatible if you have a touch device (although as a Mac user I wasn’t able to test this).

Each band has a set of controls along the base that change to reflect the band you have selected and these are helpfully colour coded as well. As you’d expect there's frequency, Q and gain and these can be set by dragging points or moving dials. What’s more interesting is the built-in dynamics processor. This allows the EQ to react to the source material dynamically rather than staying at the one setting the whole time. Imagine you have a vocalist whose EQ requirements change as they switch between singing loudly and softly, or move away from or towards the mic. Using the Threshold, Range, Attack and Release controls for each band you can control at what point the EQ changes based on dynamics. It’s possible to select not only by how much, but also when a specific frequency will be boosted or cut, compressed or expanded. 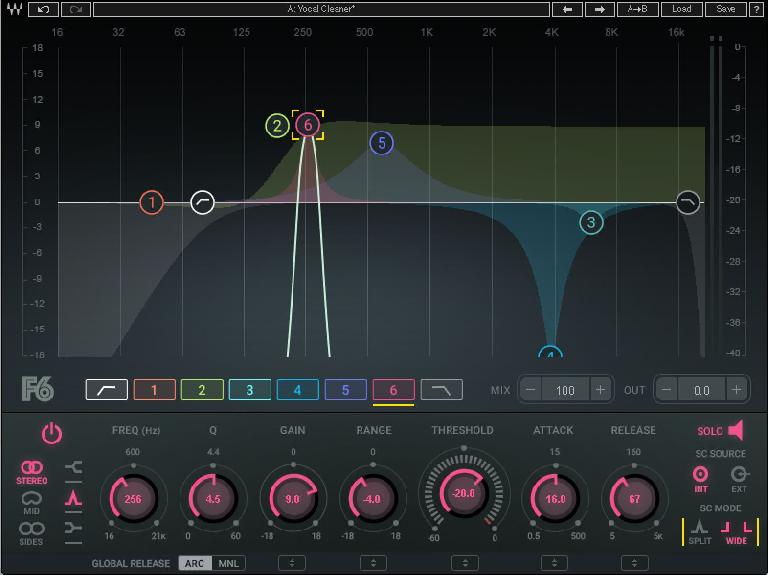 Each band can be soloed or sidechain monitored and filters can be as narrow or wide as required. There are also bell and notch EQ shapes. This surgical approach makes the F6 ideal for problem solving. Got a bass that is problematic but only when it strays into the upper ranges? Simply isolate the relevant frequency and compensate for it using the dynamics section. These tools also make it suitable for de-essing, compression and expansion-style uses. There’s a great selection of presets (though not a huge number, Waves seems to prefer it that way) and it’s both very easy to use and highly effective not just for zeroing in on problem frequencies but for more general EQ tasks too such as mastering or simple track shaping.

Given the current insanely low price of this plug-in, it must surely demand your serious consideration as a powerful and extremely flexible all-purpose EQ that will almost certainly outstrip the feature set of your DAW’s bundled EQ. And up against other third-party models it’s a very solid and effective performer. Even at full price it’s still a good deal.

Cons: Grab it before the sale ends!