Language
One of the most influential producers ever, Butch Vig, has teamed up with Waves Audio to create one of the most interesting plug-ins designed to bring his signature vocal sounds to your mixes.

Butch Vig helped to marshal in the entire concept of '˜distorted vocals on purpose' when working with legendary bands such as Nirvana, Smashing Pumpkins, and Garbage. His mixes tend to have vocals sitting right out front, unapologetically in your face. Continuing their trend of giving you a '˜producer in a plugin', Waves has created the Butch Vig Vocals offering in their signature artist series. I slapped it on a vocal track and here's what I found out.

Use it In The Mix

This should go without saying, but even I need to remind myself occasionally: try to craft your vocal sound in the mix. I'm often surprised by how many producers I work with will spend countless hours tweaking a vocal sound isolated, then put the vocal in the mix and be surprised that they have to start all over again. With a plugin like BVV, you're going to want to tweak it sitting in the whole mix. Butch Vig Vocals is unapologetically aggressive in its processing power. The compressor can absolutely squeeze the heck out of things, and the filters will decimate frequency information from a vocal signal. The crazy thing is, it all truly works together to get you a really '˜grungy' vocal sound within seconds.

The Waves Signature Series essentially puts a lot of different processors all into one interface, allowing the user to re-create the signal chain of various famous producers and recording engineers. In this case, BVV is no different. Everything you need to work with vocals is here. There is a compressor, a de-esser, discrete input and output levels, specifically tuned EQ choices, (we'll get to that in a minute), and tube/solid state preamp saturation. 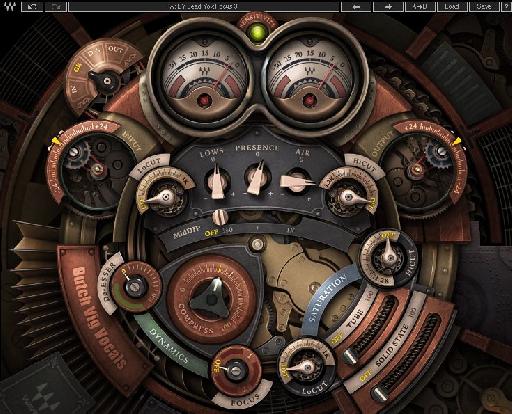 Rather than a traditional graphic or parametric EQ, BVV includes LoCut, MidDip, and HiCut filters specifically tuned to working with vocal signals. You do get to (presumably) adjust some basic EQ settings using the '˜Low, Presence, and Air' knobs located in the center of the plugin. To further add to your EQ options, there is also a 3-stage '˜focus' knob at the bottom of the interface that allows you to '˜shift the focus' of the vocal to the 1'"2 kHz range.

On top of your traditional vocal channel processing controls, the tube and solid-state saturation controls allow you to dial in your favorite type of distortion. After working with the plugin for a bit, I can confirm that the 2 options sound dramatically different, and '˜break up' your signal in different ways.

In the MP3 examples, I've chosen a segment of a driving rock project I was mixing this week. The first example is with the bare vocal tracks as they were:

The second example enables the Butch Vig Vocal plugin on both the lead and backing vocal track. I went for an aggressive sound, and you can clearly hear the vocals sitting a bit on top of the mix (as well as quite a bit of pleasant sounding distortion):

I'm a fan of the simplicity that Waves offers with its Signature Series plugins. Although I may have an entire stable of compressors, tube saturators and EQ plugins to call up'"I have to say it's nice to bring up a channel strip specifically geared towards working with one type of signal. If you're looking for an extremely aggressive vocal sound, you can't go wrong here. I even liked the little '˜cross-pollination' that Waves provided with some Chris Lord-Alge presets for this plugin as well, score!

My only little gripe is that the '˜steampunk' type interface can sometimes be distracting when making adjustments. It looks cool at first glance, but the color scheme can occasionally make it hard to find what you're looking for.