Language
Based on its hardware namesake from the 1980s, Waves have resurrected the DPR-402 dynamics processor as software. Does the plug-in keep the punchy compression character and versatility? Find out here.

In the 1980s, the DPR-402 was a comprehensive and innovative dynamics processor from BSS Audio, which found many uses on stages and in studios and broadcast facilities. It combined three dynamics processes in one stereo unit—de-essing, standard VCA compression, and peak limiting. But it also featured a number of welcome options, including side-chaining, and a series of rear-panel jumpers that allowed the user to reconfigure the unit for different frequency-dependent responses, providing a surprising amount of flexibility (particularly for a hardware compressor of that era). The unit was known for its punchy compression character, and the extra configurability made it an especially versatile tool.

Cut to the present, and the DPR-402 has been long-since discontinued, and probably forgotten by most, in favor of the older vintage “character” compressors so widely sought after and emulated nowadays. But Waves has brought this distinctive bit of kit back from the island of lost souls with this modeled version, which combines faithful attention to the original’s sound, layout, and feature set with their usual collection of value-added features, which bring even greater utility to the original design. 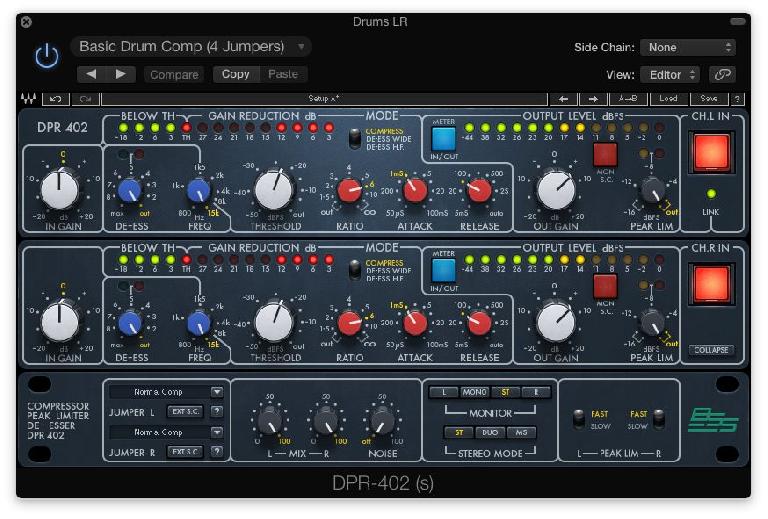 So what do you get? Well, just as in the original there are three main modes of operation, selectable by the MODE switch. There’s basic Compression—good for everything—and for vocals, a choice of wide-band De-Essing, and high-frequency De-Essing. Besides the De-Essing and Compression, there’s also a separate Peak Limiter, which follows the Compressor’s Output Gain control.

The control surface consists of Left and Right panels, which can either be linked (Stereo mode) or operated separately (Dual mode), depending on the selected STEREO MODE—one of the standard Waves extra features added to the original control set, along with their usual option for M-S operation. (The other familiar add-ons are Waves’ usual MIX controls, for parallel processing, and the NOISE knob, for emulating even more of the analog “character” of the original hardware).

Most of the controls (modeled from the original’s) are what you’d expect from those processors. The De-Ess section has a knob for setting the strength of the De-Essing, and a FREQuency knob, to tune its response. The VCA-style Compressor has the usual Threshold, Ratio, Attack, Release, and Output Gain controls. (Incidentally, some settings—like Attack and Release—are stepped controls, again, emulating the original’s). The Peak Limiter has its own separate Threshold setting, and any of the processes can be switched out of the circuit at the maximum position on the appropriate knob.

The Compressor has combined Level/Threshold and Gain Reduction metering, and the Limiter has its own indicator to show when it’s kicking in. There’s also a dedicated Output Level meter—all the metering is LED-type.

With the MODE switch in the basic Compression position, the plug-in provides its characteristic punchy compression, combined with optional peak limiting, if desired.

In the two De-Ess modes, the DPR-402 provides either wide-band De-Essing or De-Essing that attenuates only the High-Frequency sibilance (as determined by the FREQ knob). In either mode, detection is accomplished via a sidechain, which can be soloed to help the user zero in on the problem frequencies, but WIDE mode then applies gain reduction to the entire signal, while H.F. mode acts only on the high-frequency sibilance itself, for more pinpoint control (but since splitting the signal could result in phase issues, both modes are provided).

Like the original, Wave’s emulation also provides a series of JUMPERs, set via popup menus at the bottom left of the front panel. These were found on the rear panel of the hardware unit, and offer additional possibilities for frequency-based Compression and De-Essing. 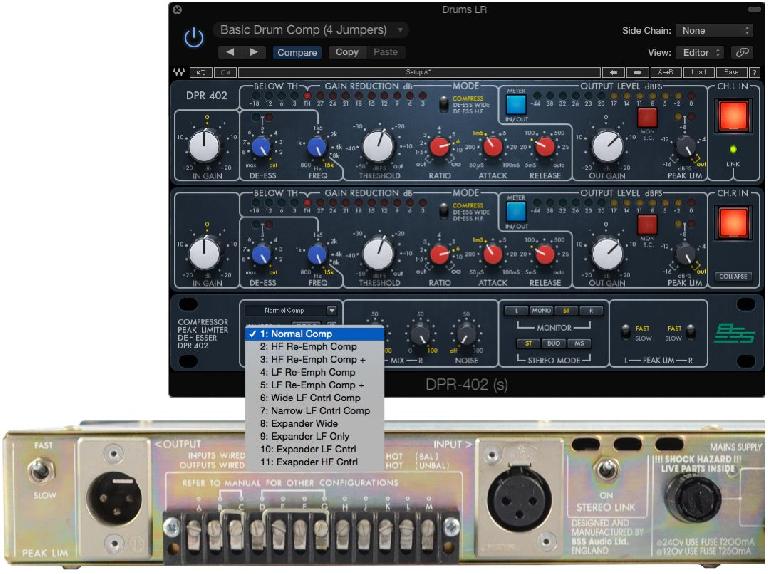 There are 11 options in all, so there’s no room to go through them all, but by way of example. The first option—Normal Comp—provides standard broadband compression. The next two—HF Re-Emph Comp (and a “+” version)—utilize sidechain filtering, which results in increased high-frequency emphasis; the next two—LF Re-Emph Comp (and the “+” version)—do the same, but in reverse—the lows are emphasized. Audio Example 2 cycles through these five options (with all other settings the same) to show the range of effect. A full description of all the JUMPER possibilities can be found in the manual, but a concise description of each is also available by clicking the little “?” button just below the JUMPER menu. 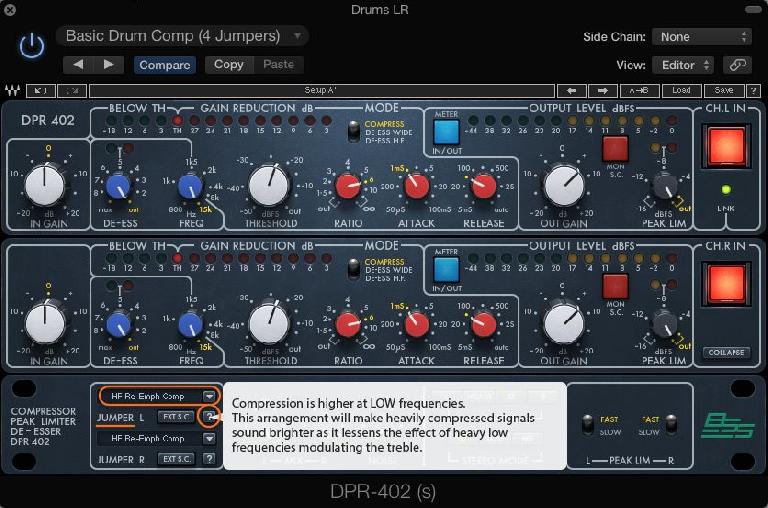 To really get a flavor for the subtle (and not so subtle) variations this processor is capable of, you’d want to spend some time going through the different Modes and Jumper options, with a number of different signals. But it would be time well spent—the Waves BSS DPR-402, despite its somewhat unwieldy moniker, is a uniquely versatile dynamics tool that’s definitely worth a look.

Cons: The various modes and options require a little time and effort to fully get a handle on

Duke
Nice review thanks. I bought this after giving it a demo. Im using it on drums and basses if I want them really thick and punchy. You can really dial it up hard without things sounding over compressed as it would be on other compressors. It adds a nice character to the sound, quite different to most modelled compressors out there. Its handy that its a DeEsser too.

There are a lot of different ways to use this thing so it takes a little getting used to. You absolutely need to read the manual to get the best out of it. Its also a little heavy on processor resources. But thats ok, I wouldnt use this all over my project tracks, just where its needed.

I can see this joining my essential plugins list.