Language
The new Reverb Plates plugin from Waves uses state-of-the-art modeling of the 4 legendary EMT 140 reverb plates housed at Abbey Road Studios used on recordings by the Beatles. We put it to the test.

Once again, Waves has added to their excellent Abbey Road collection of plug-ins, which emulate the iconic analog equipment that’s been used at that legendary studio in the creation of all those classic recordings, from the Beatles to Pink Floyd to modern day artists like Adele and Florence & The Machine. They first augmented the original bundle of REDD consoles, passive EQ, and Studer 4-track, with a plug-in version of the solid-state TG-series console, and now they’ve added a spot-on emulation of Abbey Road’s four EMT Plate Reverbs, which have graced many familiar tracks since they were first installed there in 1957. 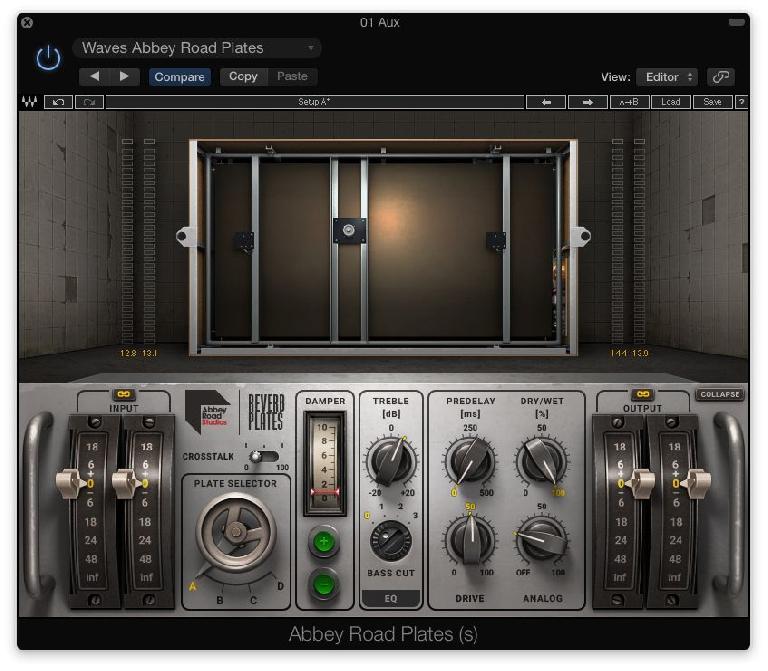 Plate reverbs were, at one time, the state of the art when it came to generating reverb in the studio, and though they’ve since been eclipsed by the flexibility of digital reverbs, their unique sound is still sought after for all kinds of music. For those who haven’t quite been around long enough (ahem) to have come across one of these electro-mechanical beauties in person, a little background might be in order.

The earliest method for generating reverb in the studio was the live chamber—a dedicated room with a speaker and mics, fed via tie-lines from the control room, which could generate real, rich acoustic reverberation. Abbey Road had three of these, which were in constant use, thanks to heavy booking. But besides the problem of availability, the downside (of any live chamber) was that, once the room was built and tuned, that was the one sound you got—most critically, you couldn’t effectively adjust reverb time, often a key setting when using reverb in a mix. Enter EMT, with the mechanical plate reverb design. This featured a large flexible metal plate (8’ x 4’), suspended in a soundproof enclosure. A transducer, again fed via tie-lines from the studio, was attached near the center, to stimulate vibration in the plate from the music signals sent to it, and two pickups were placed near opposite ends, to gather up the reverb-like vibrations that were generated, and return them to the studio. The i/o was (originally) handled by all-valve circuitry (that’s tube circuitry to us Americans), which contributed additional warmth and presence. 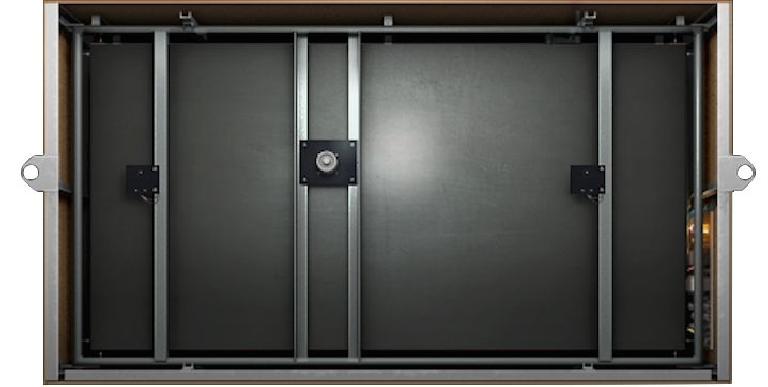 Fig 2 A view of the inside of an EMT plate reverb, showing the plate itself and the transducer (center) and pickups (left & right)

The sound of a plate is not the same as a live chamber—in a real acoustic space, the reverb builds up gradually from a unique pattern of early reflections, which lend that room its specific character, before the onset of dense reverberation. A plate instead generates a dense reverberant soundfield almost immediately, so it lacks a more specific room-like character, but it provides a lush, rich soundfield that can sound absolutely beautiful on anything from drums to vocals, and everything in-between. And, very importantly, the EMT plates came equipped with mechanical dampers (which were set up to be remote-controlled at Abbey Road), which could adjust the Reverb Time to anything from about a second to over 5 seconds (depending on the particular unit).

Abbey Road installed four of the EMT Plates, imaginatively designated A, B, C and D. 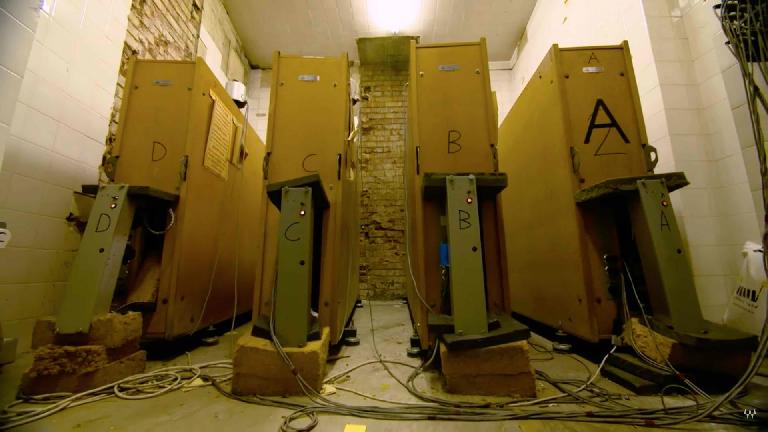 Since these were electro-mechanical devices, each individual unit would tend to have its own subtly different sound quality, and the four Abbey Road plates all sound distinctly different, in terms of brightness, density, and general tone. As was their custom, the Abbey Road engineers modded the plates somewhat (remember, these were the guys from REDD, Abbey Road’s R&D division, who gave us the REDD and TG consoles, and did the mods that led to the studio’s famous tape-based ADT effect). Besides adding remote control for the dampers, they pulled the electronics out of the cases, and substituted hybrid valve/solid-state output (return) amps for three of the reverbs (D remains all-valve in & out), all in the name of keeping the noise floor to a minimum.

The plates, of course, were a big hit, and the rest is history—you’ve undoubtedly heard them on countless recordings, where they added depth and sheen to many tracks, throughout the years. Obviously, Abbey Road still maintains and uses them regularly, and provided Waves the access they needed to carefully craft these emulations, which include all the specific features I’ve described, plus additional controls for added flexibility, all the while staying true to the sound, and vibe, of the originals.

Waves Steps Up to the Plate

So what do you get with Waves’ version of these reverbs? 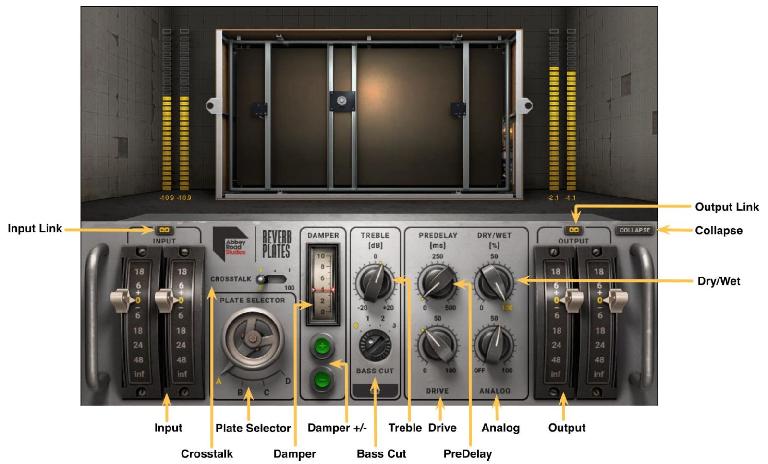 Fig 4 The controls of the Waves Abbey Road Plate Reverbs, annotated (courtesy of the PDF manual)

Well, first off, you get models of all four of the Abbey Road units. Besides the usual plug-in i/o levels, and Dry/Wet settings, there are controls for all the adjustments you could make with the real thing—a selector to choose among the four plates, and up & down buttons, which mimic the Abbey Road remote control unit for adjusting the internal dampers. You might expect that higher values for damping would increase the amount of damping, reducing decay time, but it’s the opposite—low values correspond to the shorter decay, with the higher values increasing decay time (the numbers are just relative values, not actual lengths—as you can hear in the examples below, the decay times vary significantly from unit to unit).

There’s a PreDelay control, for adding a touch of delay to the input signal before it hits the plate—like with any reverb, this can help maintain greater clarity in the dry signal. For tone control, there’s a high-cut filter (Bass Cut) and a 4 kHz high-frequency shelf (Treble) to control bass buildup and increase the amount of classic plate reverb sheen. There’s a Drive control, to dial up more of the tube edge from the input amps, and, even though Abbey Road’s engineers went to great lengths to minimize noise with the original hardware, Waves offers the option of adding a little of it back in (with their familiar “Analog” feature), for that nth degree of verisimilitude (should you be so inclined). These controls are all modeled after the original circuits at Abbey Road, to capture the specific character of these particular reverb units just as they are in real life. In the stereo in/out version of the plug-in, there’s also a Crosstalk feature that sums the inputs, to insure a stereo reverb effect even when it’s fed from mono sources.

But enough nuts & bolts, how do they sound? Well, they sound just like I remember the best plate reverbs sounding—dense, rich, with a lush quality that caresses the ears and makes everything you run through them sound like a million bucks. While plate reverbs, real or virtual, may not be the first choice when you need to simulate the specific, distinctive character of a real room or space, when it comes to adding general depth and richness, there’s nothing better, and these reverbs have that quality in spades.

As you can hear, each of the four plates on tap has its own very different, very distinctive character.

They all sound good, and each could be the best choice for different applications. I like the shortest, tightest unit, C, for drums and percussive sounds, but the longer decay and rich, thick character of D (the all-valve unit) is well-suited for sustained sounds like synth pads or strings.

I’ve previously used and reviewed all the plug-ins in the Abbey Road collection, and I think they’re all top-notch, though I do have some favorites—the Reel ADT effect, and the TG-series, especially its compressor. To that list, I’ve now added these Reverb Plates—they deliver the classic plate reverb sound in true Abbey Road style—at its best. This is definitely a worthwhile addition to any mixer’s toolbox.

Pros: Rich, lush emulations of four distinct Plate Reverbs, that capture the sound and vibe of the originals

Cons: A bit heavy on the CPU

Watch this video course to learn about the other Waves Abbey Road plugin collection.

Jay Asher
Hey Joe, do you think it is enough better than the UAD Plate 140 to warrant the CPU hit? I compared them and am not so sure.
Joe A
Hey Jay -
I haven't had any direct experience with the UAD Plate, so I couldn't say (though in general I find UAD's emulations to be excellent), but I wouldn't worry too much about the Waves' CPU hit -- I tested on a slightly older computer, on a more up-to-date machine it probably wouldn't hit quite so hard, and you likely wouldn't be running too many at one time, anyway.. :-)
Cheers,
Joe