Language
Spectrum is a hybrid waveform Kontakt instrument from Wave Alchemy based on 14 iconic vintage analog synths. Noah Pred gets under the hood in this detailed review.

Anyone familiar with Wave Alchemy's product line likely has understandably high expectations when it comes to new devices from them: their recording and post-processing is among the best in the industry. The announcement of their new sample-based analog synth instrument for Native Instruments' Kontakt platform predictably inspired widespread anticipation. Here we get a look under the hood at this impressively packaged and presented instrument. 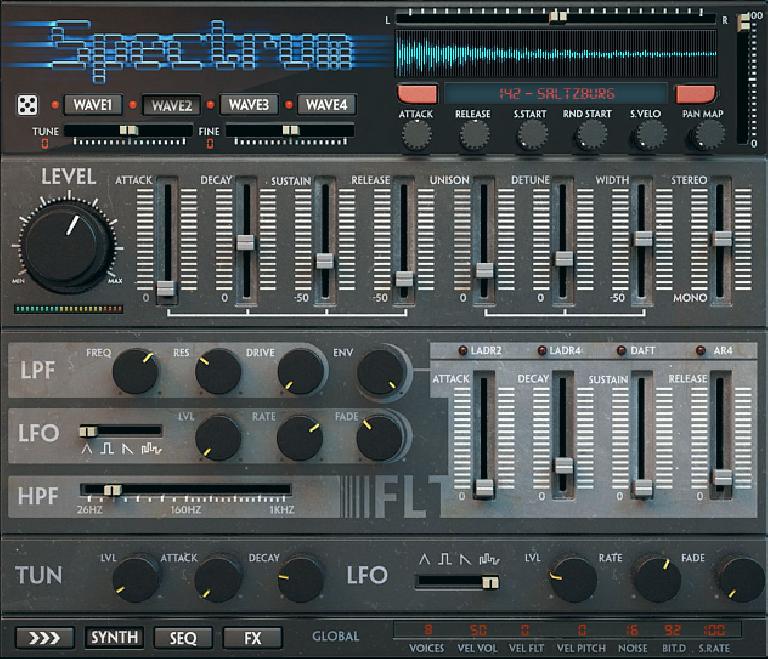 Analog For The Masses

Analog sounds: we all need them, but we can't all afford them. While Arturia more or less has the market for virtual emulation of classic vintage synths cornered, their price point is still well beyond many producers' means. Those seeking equivalent sound quality in a sensible package at a lower price point, Spectrum is made for you—so long as you've got a full Kontakt license.

Frustratingly for us gearheads, there's a bit of guess work involved as the waveforms have been assigned names that, while intriguing, don't indicate their source—so it's difficult in most cases to determine which oscillators were sampled from which synth. If you can look past that and start getting creative, you can at least rest assured the samples were recorded from equipment most of us can only dream of using, let alone owning.

The core of any Spectrum patch is comprised of four Wave slots, each of which can host one of Spectrum's 175 waveforms. Each slot comes with its own coarse and fine-tuning, panning and volume, along with attack, release, sample start and end, velocity, and keyboard pan mapping controls. Using a single waveform on its own was enough to generate convincingly obese low-end and blistering leads, but the more you stack, the more textured your results will be. If the 250 included snapshot presets aren't enough to get started, the waveform randomizer is there to provide a unique layer combination when you've lost the time or patience to scroll.

Below the waveform area—which remains visible in the other two panes – are the output controls. A main level with ADSR controls are followed by a unison amount, which comes with its own detune, width, and stereo amounts.

The filter section comes with selectable LADR2, LADR4, DAFT, and AR4 low pass circuit models: the LADR models seemed the most aggressive, while the DAFT model had a pleasing clarity and brightness at high envelope values; the AR4 seemed more appropriate for muted tones. The low pass filter comes with its own dedicated ADSR, Drive circuit, and LFO with the standard compliment of triangle, square, sawtooth, and S&H shapes. A static dedicated high pass filter is on hand to remove rumble or keep things crisp.

The tuning section comes with its own dedicated simple AD envelope and LFO, while the Global settings at bottom provide access to adjustable polyphony and velocity controls, along with noise amount, bit reduction, and sample rate controls for integrated digital degradation where desired. 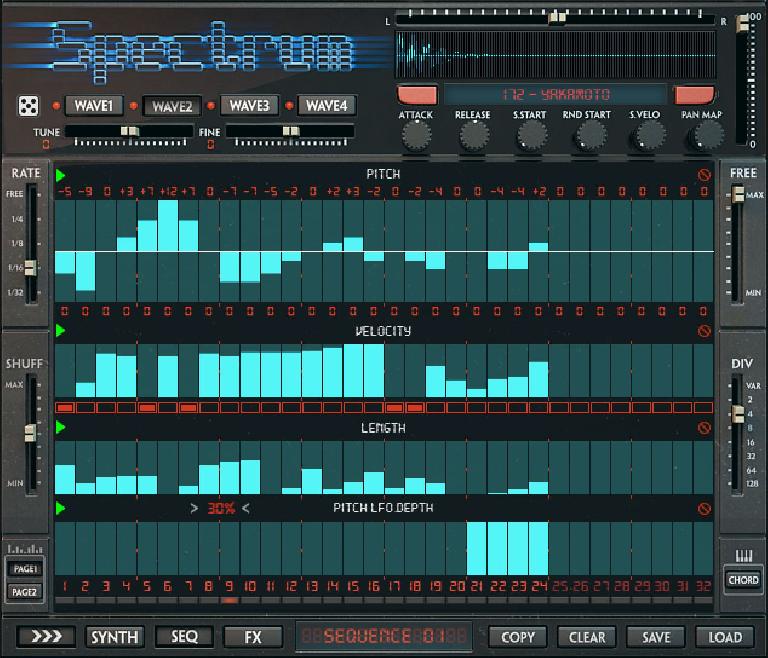 Page one of the Spectrum sequencer.

Built on a similar framework as Wave Alchemy's recent Mutate instrument, Spectrum comes with a built-in 32-step sequencer. With an adjustable host-synchronized rate from 1/4 to 1/32 note—or a free run mode for more abstract expressions—along with a shuffle control and note gate division amount, nine parameters in total are available for sequencing, divided between two pages: pitch, velocity, length, and pitch LFO depth on the first; filter cutoff, resonance, envelope amount, attack, and decay on the second.

This isn't a free-running sequencer—it responds to incoming MIDI with whatever note has been triggered as the center of the pitch sequencer, which means you can create everything from intricate melodies to simple key changes by combining the sequencer with some clever MIDI programming. I found myself wishing the pitch sequencer had a key lock or scale quantization option for easier diatonic editing, but with the relative semitone step values displayed up top, it's not too hard to orient yourself with some basic music theory. An octave sequencer would have been nice, along with a per-sequence randomization function, but I don't think either would amount to a deal-breaker here.

A Chord memory section is a new addition to the Wave Alchemy sequencer, and it comes in two modes. The first memorizes the chord and triggers it with each key; the second triggers the chord only when the corresponding key you've assigned it to is played at the correct octave. While this feature should spice up otherwise monophonic sequences, it seemed to trigger surprising CPU spikes at time of writing—presumably a bug that will be addressed by the time a final version is released. 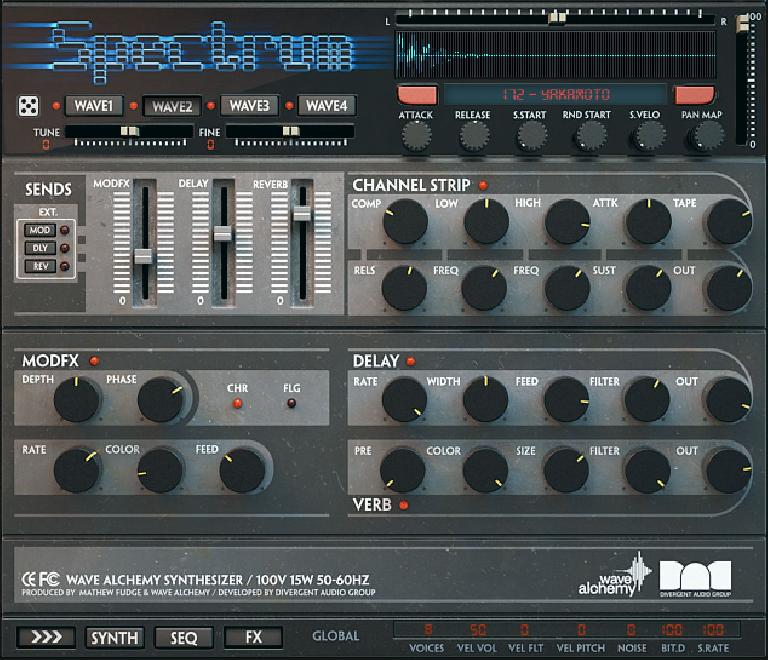 The final panel of Spectrum provides access to four dedicated effect areas. First up is a channel strip section comprised of compression amount with release time, sweepable low and high EQ bands, transient attack and sustain, tape saturation, and output. Mod FX can be toggled between chorus or flanger, each with their own depth, phase, rate, color, and feedback amounts. Dedicated delay comes with host-synchronized rate, width, feedback and filtration, while the expansive reverb provides the final bit of sheen with pre-delay, color, size, and its own filter circuit.

Anyone looking for authentic analog sounds—who owns a full Kontakt license, which would include owners of NI's Komplete bundle—should give Spectrum serious consideration; unfortunately, Spectrum isn't compatible with the free version of Kontakt Player.

Pros: Sounds great, easy to use, beats the competition for price.