Language
Want eurorack synth sounds with the convenience of a plugin? Wave Alchemy's 3.7 GB Mutate is made up of eurorack bass-oriented synths for Kontakt! Noah Pred uncovers its inspirational sonunds.

Wave Alchemy have rightfully built an industry name when it comes to faithfully sampled analog sound libraries. Their latest Kontakt instrument, Mutate, is built on a robust 3.7 GB collection of bass-focused Eurorack synthesizer multi-samples. The included tones range from searing hot to deep and rumbling—but the real attraction is the multi-page sequencer, designed to rapidly generate musical ideas and intricate sequenced effects.

Mutate comes in two flavors: Designed Presets, and Raw Waveforms. While the former lets you scroll through pre-designed sequences and sounds, I chose to focus on the somewhat more flexible Raw Waveforms instrument.

A dedicated filter section featuring Freq, Res, and Drive, along with dedicated Env and Mod amounts takes up the top section of Mutate's Synth page. Along the bottom, three distortion circuit controls—Smash, Crush, and Burn—are sandwiched between Input and Output gain controls.

Dedicated ADHSR Amp and Filter envelopes flank the central Oscillator section—the primary GUI element that differs significantly between Mutate's Designed and Raw instruments—where you can stack up to three oscillators, a fourth sub oscillator, each with their own semitone and fine tuning controls, along with an optional noise generator. 42 oscillator waveforms and 5 sub oscillator shapes supply ample opportunity for unique tonal combinations.

Clicking the arrow above the distortion section reveals a Modulation section, with LFO, effect Sends, Unison, Velocity, and Spread controls. Somehow, none of the parameters available on the entire Synth page were available for host automation assignment. 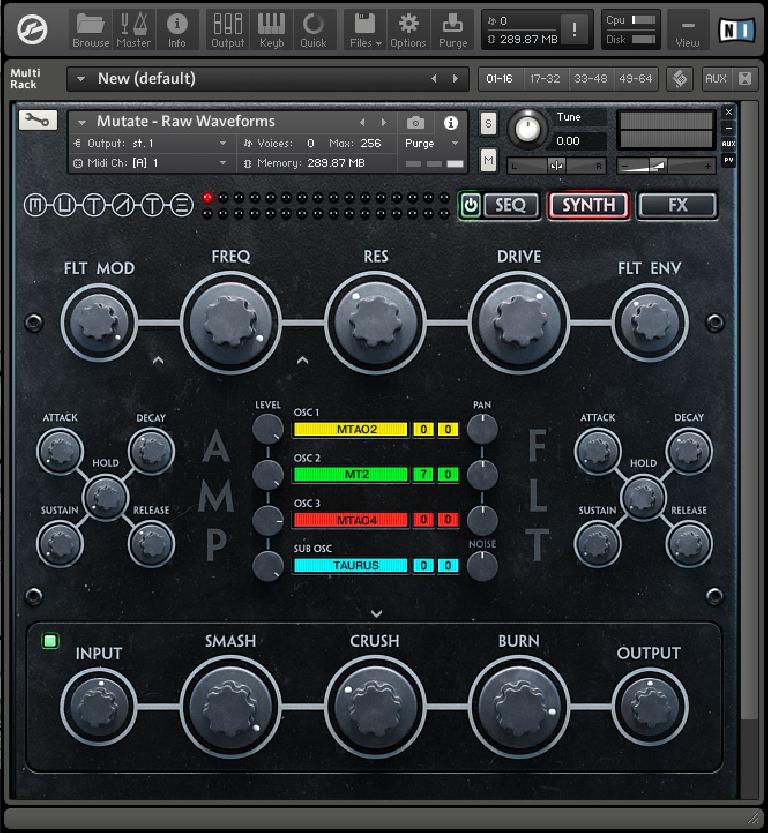 The top section of the Sequencer section lets you select between a base rate of 1/4, 1/8, 1/16, 1/32, and 1/64 notes—or, when not synced to your host, a free rate between 10 and 300 ms; a bipolar Shuffle dial allows for extremely swung grooves. Up to 16 sequencer patterns can be stored, with the Copy and Clear buttons helping transfer data from one pattern to another; each pattern can be up to 32 steps in length. A Run toggle enables or disables each sequencer parameter, while each parameter's Reset button restores a default null pattern.

Comprised of three pages of sequencer parameters, the first contains per-step adjustment of Pitch, Volume, Length, and Attack. A menu beneath each chromatic pitch step allows for shifts up or down one or two octaves. Beneath each Volume step is a handy mute toggle, while the Length steps can be quantized in amounts from 1/2 to 1/128 note.

In an intriguing twist, the Sequencer isn't simply triggered by your host's Transport, but instead by incoming MIDI notes—meaning that each pitch sequence is triggered in relation to notes coming in, allowing for an unexpected additional range of variation and expression. 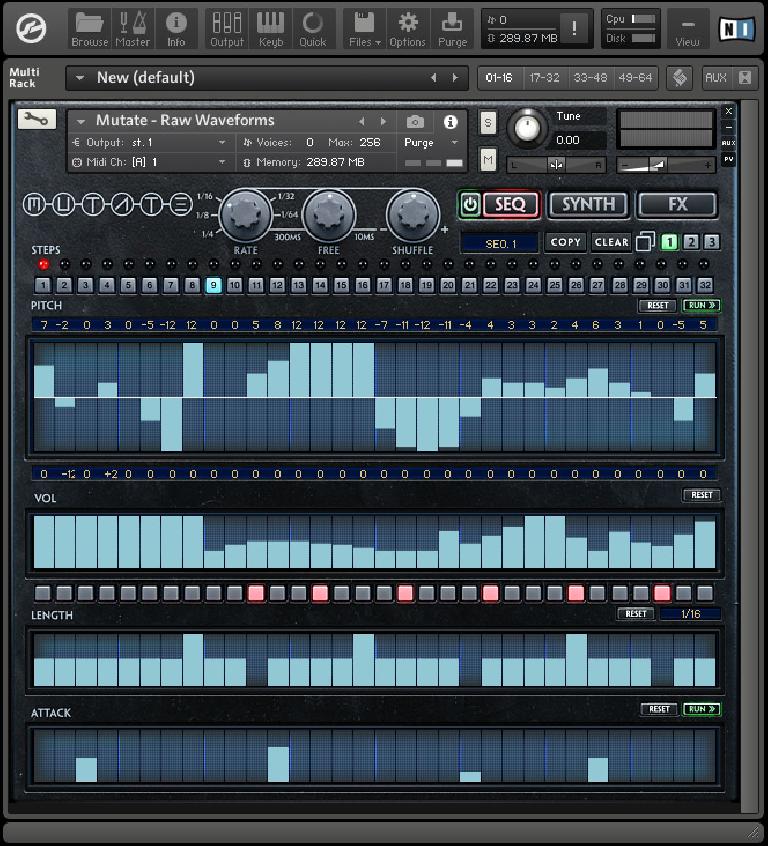 While “parameter lock” sequencing—pioneered by Elektron, and easily accessible via Live's Clip Modulation Envelopes—is nothing new, Mutate's clever implementation of it can lead to surprisingly satisfying patterns with just a few tweaks. Combined with Wave Alchemy's devotion to multi-sample fidelity and an integrated effect section including Flanger, Phaser, Chorus, Reverb, and Delay, Mutate is sure to inspire plenty new riffs in the studio.