A forward-thinking drum sequencer with a wealth of powerful features and the immaculate samples Wave Alchemy is known for. Noah Pred falls in love with Evolution...

Known for their vast drum libraries and intricate Kontakt instruments alike, Wave Alchemy have delivered their most ambitious drum programming tool yet: Evolution. Where their Transistor Revolution instrument featured an exhaustive library of vintage drum machine sounds enhanced with all manner of processing and a potent sequencer, Evolution builds off that template with a fresh approach to layered percussion design, extensive on-board effects, all-new forward-looking sample library, and an even more powerful sequencing system.

Built from an immaculate 4.67 GB library of more than 28,000 samples that easily lives up to the lofty standards Wave Alchemy has firmly established, Evolution is essentially comprised of 12 drum voices. Each of those voices, in turn, is constructed by three discrete sample engines: Drum, Transient, and Layer. Featuring three main device pages – per-voice XY mix and macro modulation, Mixer, and Sequencer – the currently selected drum voice remains visible along the top of Evolution’s handsome interface throughout all sections.

Ten main categories are available for the primary Drum layer, including the usual suspects: Kick, Snare, Tom, Hat Closed, Hat Open, Cymbal, and Clap, along with Perc Real, Perc Electro, and Perc Glitch. Once the general drum family has been selected from the corresponding buttons at right, up to twelve further contextual sub-categories are available for stylistic expediency on the similar buttons beneath, helping navigate the vast array of available samples in sensible fashion. 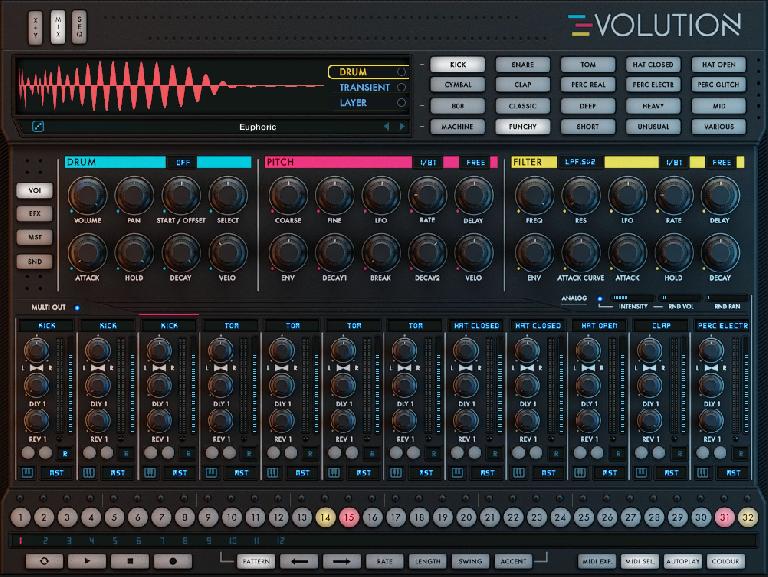 Clicking the Drum, Transient or Layer text to the right of the waveform display determines which engine is in focus, while clicking the corresponding dot allows that engine to be soloed for isolated editing. The Transient engine offers five categories to add definition to the impact of any drum voice: Soft, Hard, Clap, Click, or Snare Body. Providing additional texture on the tail end, the Layer engine offers ten classes: Organic, Sub Deep, Sub Mid, Sub Verb, and Sub Bomb for low-end sound design; Live Snare, Prep Snare, and Room Snare for more convincing kit drums; and Clap Tail and Noise for top-end material.

A random selection can be drawn from the currently selected sample engine category by clicking the die icon beneath the waveform, easily generating new kits from scratch – or by adjusting the selected layer’s Select knob in the Voice section.

Each Drum engine layer is provided a host of its own discrete settings, from Volume, Pan, Velocity, Amp Envelope, and Start/Offset to dedicated Pitch and Filter settings, each with their own envelopes and host-syncable LFO. These are available separately for each of the three layered sample engines on a single drum voice, along with analog intensity emulation, plus volume and panning randomization amounts. Considering, for example, that each drum layer can deploy a different filter circuit – with 20 low-, high-, and band-pass modes to choose from – each with different envelope settings and LFO rates, the sound design possibilities are staggering. To simplify matters somewhat, you can link any of the voice parameters to all three layers simultaneously by simply clicking its title so a line appears beneath. Six choke groups are available for rhythmic interactivity.

A Tom voice selected with Volume, Coarse Pitch, Filter Frequency, Resonance, and Pitch all linked between the Drum, Transient, and Layer stacks, as denoted by the lines beneath their names.

While not split between the three layers of a drum voice, each drum track comes with its own 4-band Equalizer, Compressor with Solid or Feedback modes, and Shaper circuits for even more intricate sound design. The Shaper circuit alone contains Filter, Lo-fi distortion, Transient augmentation and Tape saturation parameters, all of which can be re-routed via the menu below – as can the order of the EQ, Compression, and Shaper circuits overall.

A nearly identical set of Master effects can be applied to all drum voices not routed through alternate outs via Kontakt multi-out routing, with Filter Drive being swapped out for Filter Resonance – handy for carving, gluing, crushing, exciting, and decimating your entire kit as a whole.

A pair of host-syncable delay lines and a pair of convolution reverb units are available for send effect usage. Including an impressive selection of vintage, studio, room, and other reverb impulses, Evolution makes it easy to spatialize each voice as context demands.

Each of the twelve drum voices comes with a mixer channel including volume control, stereo balance, plus a delay and reverb send – which can be toggled between either delay line or convolution unit by clicking the title beneath the dial – along with mute and solo. Optional retrigger mode controls voice overlap behavior, while a MIDI pitch-mode allows for real-time recording of melodic input to the sequencer from C3-C5 on a connected keyboard. Multi-output routing can be selected per-voice here as well. 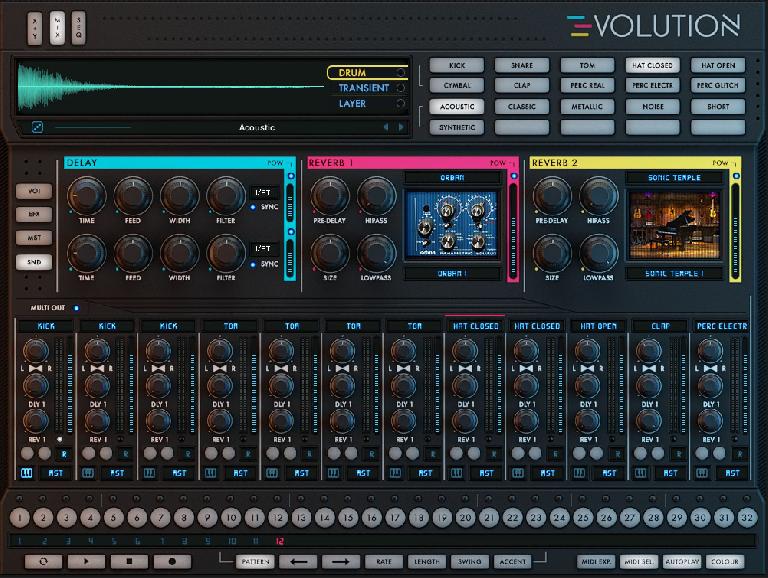 Send effects with Closed Hats selected on the mixer.

Clicking the X + Y toggle at the top left of Evolution brings us to the XY mix pad and macro controls for whichever voice is currently selected. The XY pad allows for swift, intuitive, and visual mixing between the Drum, Transient, and Layer engines for the selected voice, while the eight macros allow for bespoke Sequencer control – but more on that in a moment.

Each macro can be selected from a full drop-down menu of per-voice parameters by clicking its title, while the T, D, and L amounts determine how much that macro controls the Transient, Drum, and Layer engines respectively, allowing for incredibly precise control across any voice’s plentiful parameters. A ring appears around the dial of a parameter assigned to a macro, with a dot in that ring showing the parameter’s true macro-compensated position. 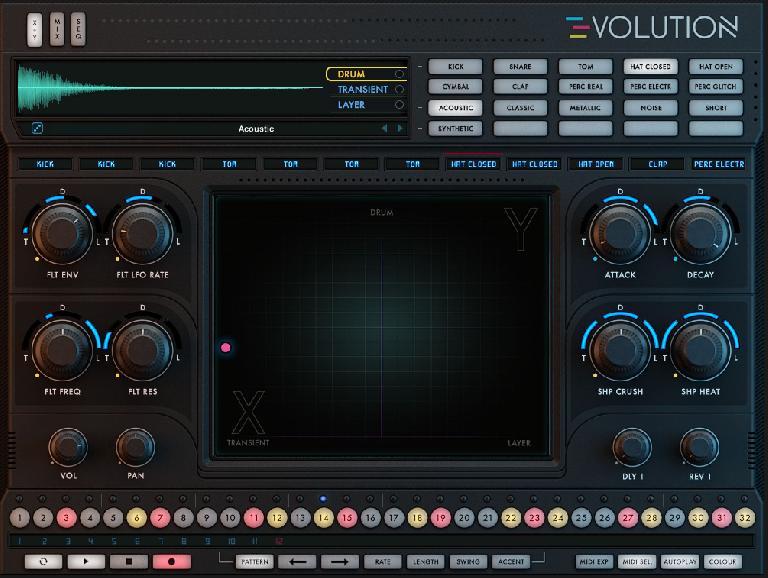 While not all of Evolution’s multitude of a dials are available for host-DAW automation, the macro knobs are, which makes programming them that much more worthwhile – and with the Sequencer in record mode, parameter adjustments made to the macro dials are committed to Evolution’s significant Sequencer.

Evolution can easily be programmed via MIDI in a host DAW, with Drum voices located from C1-B1, but its impressively implemented sequencer is certainly worth wrapping your head around. While whichever voice is currently selected can be sequenced in any view via the vintage sequencer buttons along the bottom of the interface, toggling Evolutions sequencer view via the top left button provides access to far more complex programming. 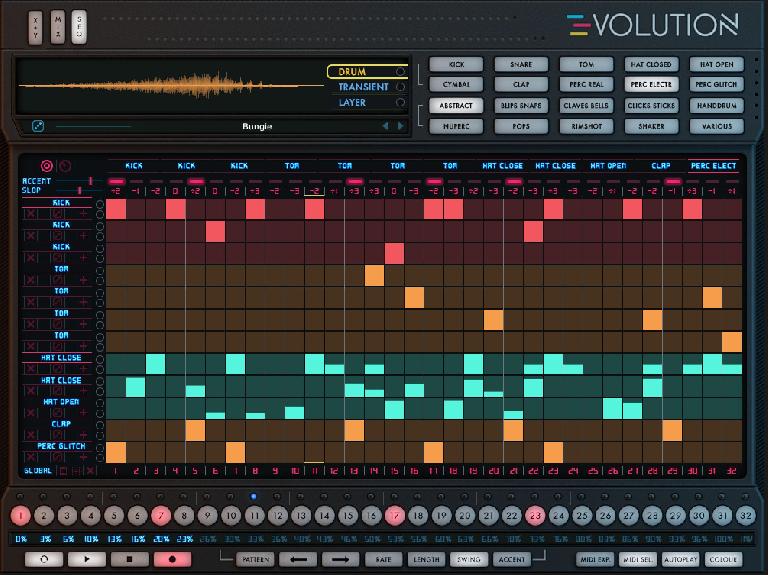 Each of the twelve voice lanes can be written in via mouse, with vertical intensity corresponding to velocity. Those lanes can be cleared via the X button, randomized via the die icon, or expanded for easier editing of a specific voice pattern.

Strung along top of the grid are the Accent toggles and per-step flam amount, which can be randomized per-pass ahead or behind the beat via the Slop slider, while the Accent slider determines the accent intensity in positive or negative decibel values.

Along the bottom, the sequence can be shortened or expanded to a full 32-step duration by double-clicking a corresponding step interval along the bottom, while each of the 12 MIDI-selectable sequences can be duplicated, copied, or cleared via global controls. 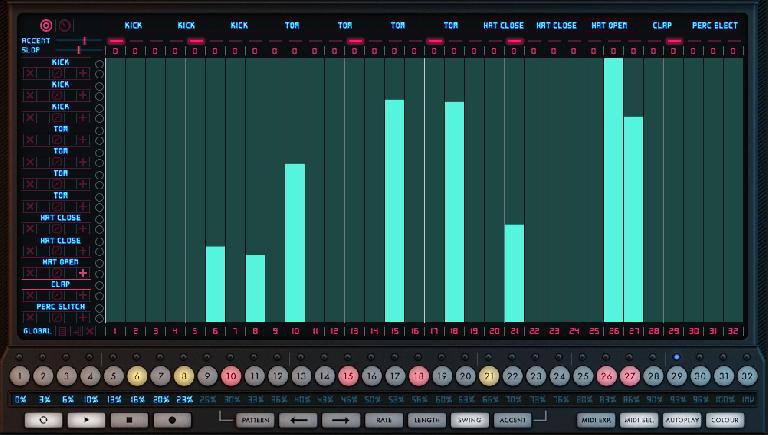 To make the sequencer even more powerful, clicking the dial symbol in the upper left opens the Parameter Lock sequencer, allowing for powerful per-voice step control of Pitch, Volume, Pan, sends, and whatever parameters have been assigned to a voice’s macro dials. Randomizing here and there, then expanding a Parameter Lock lane for fine-tune editing results in dynamic, intricate patterns difficult to imagine creating through any other means.

If the drum library alone isn’t enough to sell you, Evolution’s unique layering of three engines per-voice, impressive effects, intuitive XY mixer, and macro controls should form a convincing combination for anyone seeking a forward-thinking software-based drum instrument. Even those who might insist on programming via their DAW can still make use of the sequencer, thanks to Evolution’s convenient MIDI Export feature. Combine all this with a wealth of versatile presets and multiple tape-enhanced versions recorded through analog equipment, and everyone from bedroom producers to elite sound designers should find Wave Alchemy’s latest instrument a mighty tool for constructing the rhythms of the future.

Cons: Many key parameters not available for host DAW automation by default; no per-voice sequence lengths.

JustBen
Just finished installing it and now I've been playing with for about twenty minutes and I've got a new best friend. The tweaking alone on this thing is incredible. To be able to take care of ALL your effects within the unit and just have the drums cut through is a HUGE time saver. I'm getting up early tomorrow because Xmas has come early this year.