Language
With dozens of good software reverb units available, a new reverb plug-in would need to be pretty special to make us sit up and take notice. Find out what effect Spark Verb has had on Mo Volans...

For a while now I've been looking for a reverb plug-in that's flexible enough to be a solid 'go to' processor. SparkVerb by UVI jumped out at me as a possible contender and after some time putting it through its paces, I'm happy to be able to share my thoughts with you...

One Reverb To Rule Them All?

I would imagine that most of you, like me, use a number of different reverbs. The plug-in I use tends to vary on the situation, so if I'm treating vocals a plate emulation is employed or for something more lush an algorithmic hall and so on. The real problem here is that it means having an extensive plug-in collection to get the job done.

This scenario is fine if you have a pro budget and don't mind a relatively complex setup, but if you have limited resources or just want to keep things simple then a plug-in that can cater for all your needs is going to be ideal.

When I saw UVI's early press releases for SparkVerb, I immediately homed in on it as it looked like something that may be able to produce a wide range of reverb effects. UVI also promised a modest CPU hit. As you'll already know if you plan to run several instances of any plug-in, this is a crucial feature. Let's take a look at the plug-in in some detail and we'll find out if it really can take on the work of a number of plug-ins...

After a pain free installation process the first thing that struck me about SparkVerb was it's extremely simple, uncluttered interface. Some reverbs can be a little bogged down with faders, drop down menus and metering. That certainly isn't a problem here as everything happens in one window (more or less).

There are actually very few controls here for an algorithmic reverb, 14 knobs and 4 buttons, yes I counted them. Although things are kept simple, there was literally no point during my experimentation when I felt limited. Everything you need to construct realistic spaces is here. 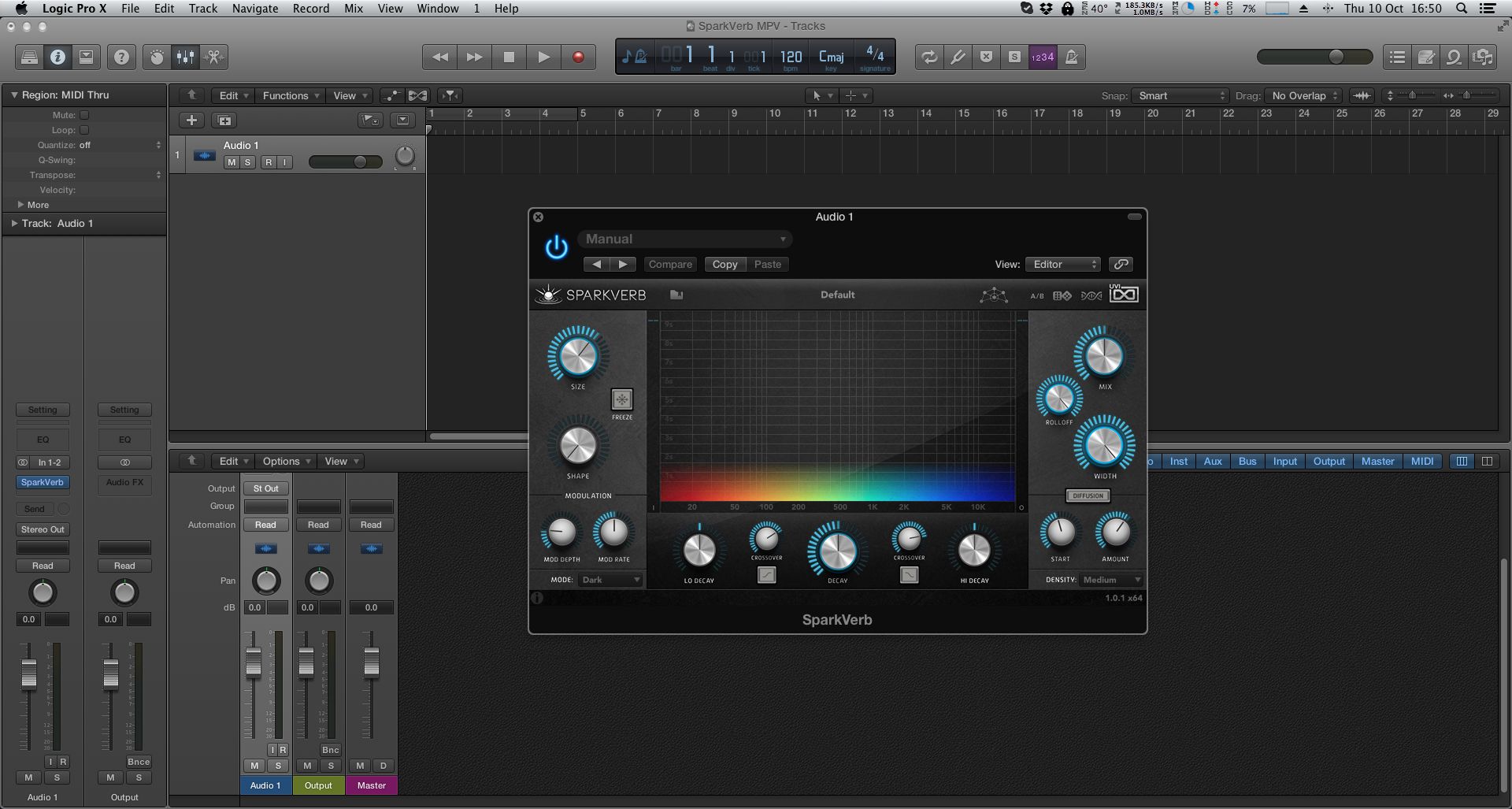 SparkVerb's interface is uncluttered and concise.

In reality, the simplicity of SparkVerb actually helped me to create my own patches and ultimately encouraged creativity. I honestly think that stripped down, functional interfaces like this are the way to go. It just goes to show that processors that can produce complex sounds don't have to have complex controls.

In the center of the interface there is a colorful display which is perfect for getting a quick idea of the decay time of your current patch and also the frequencies that are being effect. These things are sometimes a bit of a bit of a gimmick but in this case I found it genuinely useful. 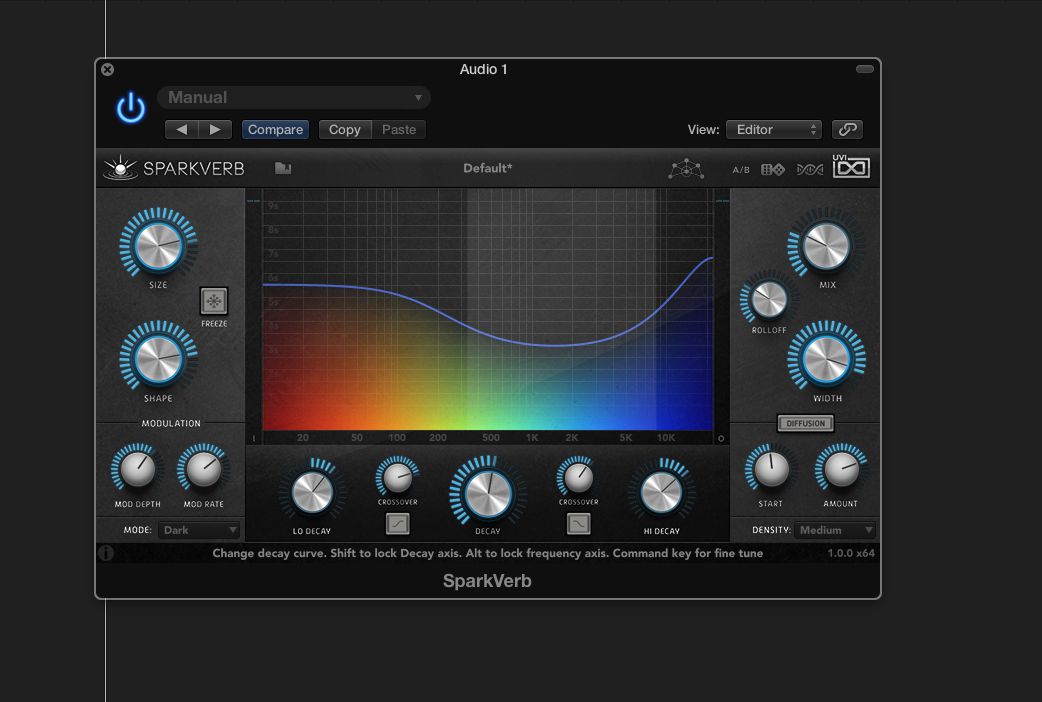 The graphic display is useful and actually functional.

Outside of this the controls are pretty traditional and anyone who has ever used any sort of reverb plug-in should find it easy to get into creating their own patches. So what sort of reverb can this thing produce I hear you ask... and how does it sound? Well let's find out.

I'm not usually a huge fan of presets but in the case of SparkVerb the supplied patch library is not only extensive but also perfect for showcasing the processors capabilities. They are also excellent for learning how to program SparkVerb if you are still learning the ropes.

First up the shorter workhorse effects, such as plates, rooms and ambiences are excellent. They add sheen and sparkle as you'd expect but also a pleasing stereo spread. I found myself settling much earlier than I would with most other reverb plug-ins and was able to create sounds that I might otherwise use a specific processor for. There are a good selection of patches here to get you started.

Moving into the more expansive effects, I was just as impressed. Even when using unrealistically elongated reverb times, the sound remained smooth and never became metallic or unpleasant. Even when things were fully cranked, SparkVerb pumped out some pretty amazing ethereal atmospherics!

A dry drum loop ready for some verb!

A simple plate is added:

So after running a lot of audio through SparkVerb, using multiple instances of the plug-in, I'm yet to see a significant hit to my CPU and considering the space you can introduce into your mix with this plug-in, that's an impressive achievement.

A classic hall patch in action:

It's not just this performance that impressed me, but some real thought has obviously gone into the extra details here. For instance, the display area I mentioned earlier can also be used to manipulate your patches. Grab the line on the screen and you can alter the filter crossover, decay times and EQ settings. 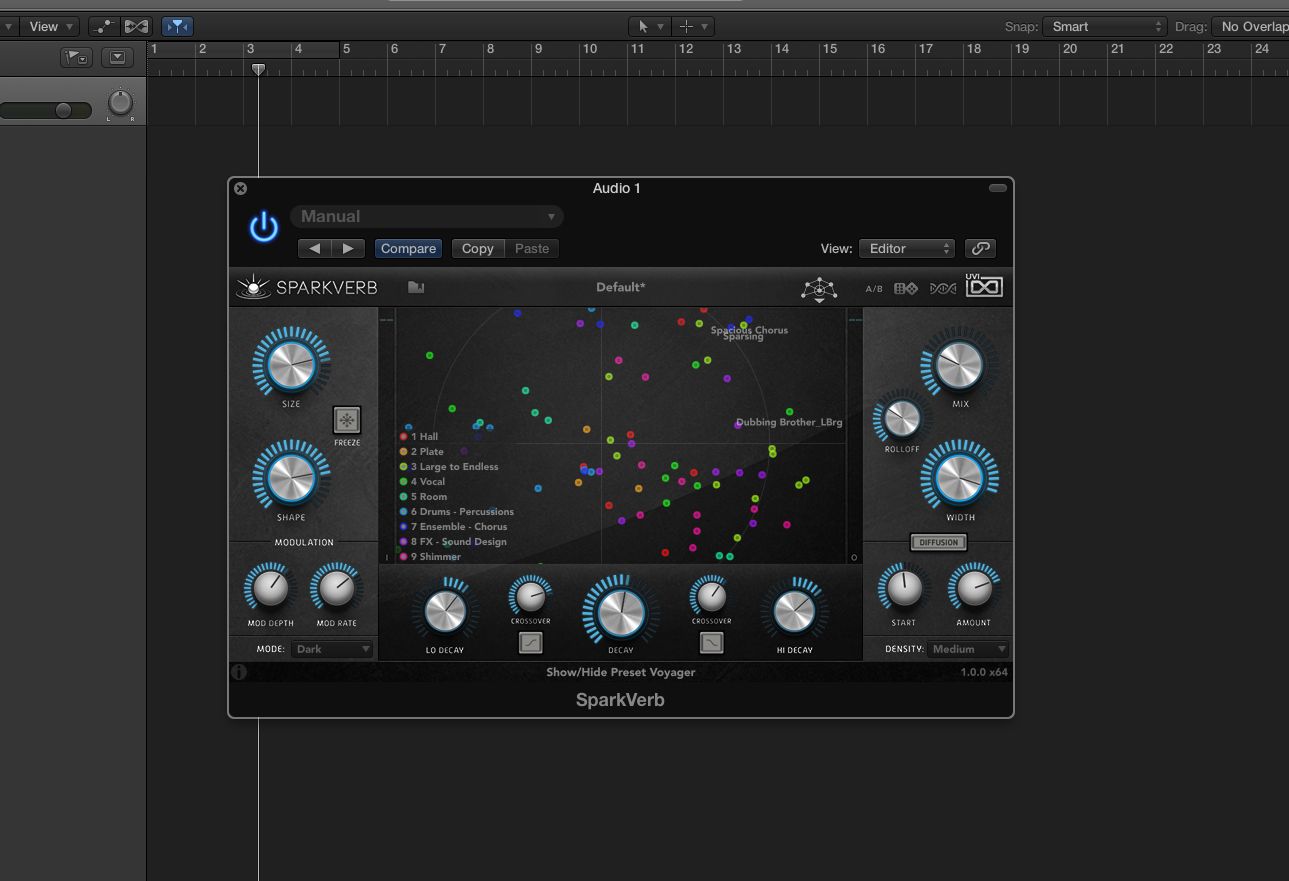 The 'Pre-set Voyager' is a nice touch here.

One of Spark's special 'sheen' patches called 'Lost in Spark':

You get access to the innovative 'Pre-set Voyager' that allows you to scroll through patches (and create new ones) in a sort of three dimensional space. Add to this cool features like lockable parameters, patch randomization and mutation, and you end up with what may be one of the most attractive native reverbs out there.

You might be able to guess from reading this that I like SparkVerb quite a bit! For the price, this has to be one of the best choices for reverb out there. Sure there are other software verbs that are as good as this if not better, but you'll pay around 10 times the price for anything in the same class.

So all in all it's pretty hard to fault, but one thing I'd say is that I just wish UVI hadn't opted for iLok based protection. I really wanted to use this reverb on all my machines and especially while I was on the road. Although the iLok is obviously portable, it's a real pain remembering to take it out of my studio setup.

The upside here is that you can actually choose to authorize a single computer rather than your iLok, but this also ties you to one machine. You can switch between licensing modes, but it would be a real bonus if you could authorize one computer and your iLok simultaneously as this would more or less solve the problem. 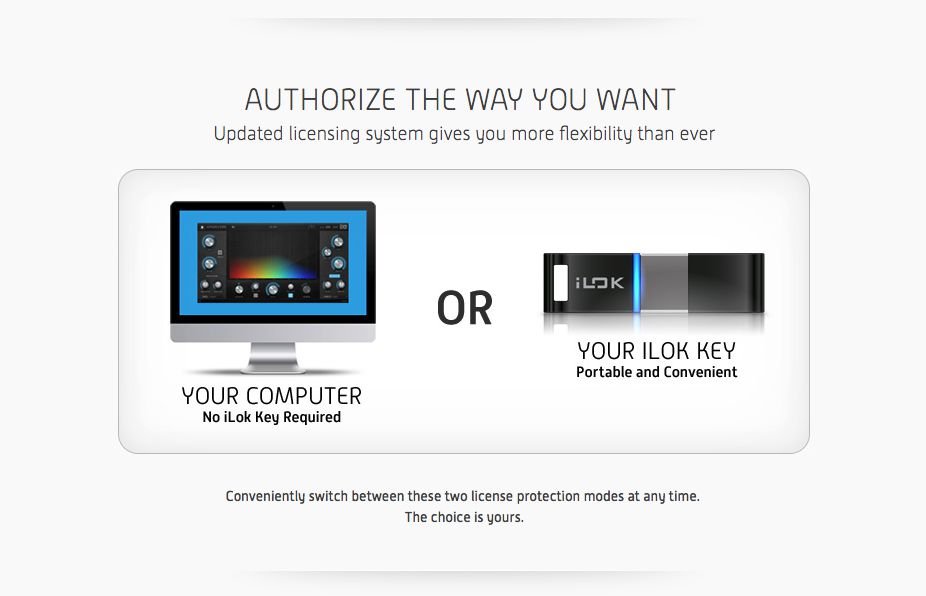 You can authorize your machine or iLok but both would have been nice.

This minor grumble aside, I was hugely impressed with this product and wouldn't hesitate to recommend it as a 'go to' reverb. It's sensibly priced and wont bring your computer to its knees. UVI have a 15 day demo on their site, go and check it out!