Drum Replacer is a realtime, drum replacement and processing utility that separates audio components and has a sophisticated way of triggering new drum samples. Matt Vanacoro puts it to the test.

When Drum Replacer by UVI was announced, I’m going to be honest and say my first reaction was… “huh?” As a company known mainly for creating synths and sampled instruments, I was interested to see where they were going with Drum Replacer. I’m also a Logic user, and the built-in drum replacement in Logic is pretty simple to use. I didn’t think a case would be made for me picking up Drum Replacer… and I couldn’t have been more wrong.

Drum Replacer allows you to drop a plugin on any channel or bus and get instant triggering and analysis. You can then ‘connect’ this triggering to individual sounds/samples or hosted VST instruments. In that sense, it does what you’d expect a drum replacement plugin to do. It ‘hears’ a sound, and it uses that to trigger playing back a different sound. Now take that core concept and add incredibly intelligent AI, a comprehensive suite of triggering controls, and complete access to the way sounds are triggered. Once I opened it up and played with it a bit, it became clear that Drum Replacer was unlike any other analysis/triggering plugin I had ever used. 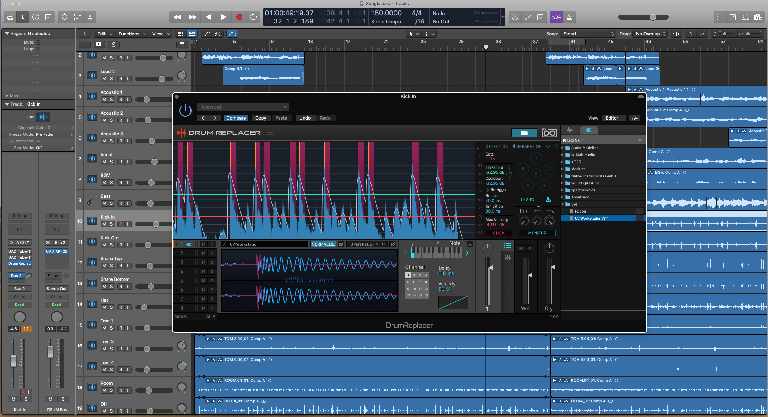 The amount of control you have over what triggers a MIDI note is truly staggering. You can adjust the audio threshold of what triggers a note. You can set a cool down stage to avoid accidental re-triggering. You can tweak the velocity range that is output via MIDI after detection. You can set a threshold based on peak or RMS of the audio in the same display. Those points are only the ‘tentpole features’ - It’s really kind of staggering how much is offered in the detection and analysis phase.

My favorite piece of Drum Replacer might be how much you can work with the sample you choose to ‘replace’ your original sound. I suppose this should have been expected from the folks that developed Falcon (Falcon has fantastic time/pitch/warp sample manipulation options), but it was a very pleasant surprise. You have the ability to combine your ‘replaced’ sound with the original in a very convenient manner. In addition to complete dry/wet control, you can actually overlay the 2 waveforms and see if you will encounter phase issues, and invert/correct those issues as they come up. The ability to quickly ‘gain match’ with the click of a button is also much appreciated.

You don’t have to even load up multiple instances or ‘clone’ tracks if you want to layer a bunch of sounds. Drum Replacer gives you 8 tracks internally to work with, so I found it easy to both replace my original thin kick from a live recording and augment it with some electronic flair at the same time.

You can utilize Drum Replacer as a VSTi host as well, so you don’t have to trigger individual samples. Once it scans your system, your favorite drum sample libraries will show up and be available for triggering. I quickly layered some synthetic sounds from BeatBox Anthology (via UVI workstation) as well as some traditional kick drum samples from Superior Drummer 3 and it worked without a hitch.

The workflow in Drum Replacer is certainly approachable and convenient for those of us that just want to fatten a thin kick sound or augment a little electronic vibe over an acoustic kit. The pro features, however, are most certainly there. Utilizing the machine learning aspect of analyzing a drum track is not only a time saver, it’s kind of freaky cool to watch! Having Drum Replacer ‘listen’ to the whole track and then provide ‘push button access’ to the different elements of a track is awesome. It allows you to set your triggering options in a snap and is definitely a feature I’ll be using frequently.

Drum Replacer is most certainly a plugin I didn’t know I needed. I have been using the built in tools in Logic for so long I truly hadn’t considered there was a better way to work and now that I’ve used it I won’t likely go back. For 99 bucks you can’t beat it, even if you only use it to clean up a single drum set element now and then.

Cons: I really can’t think of any. It’s a fantastic tool and it’s offered at a great price.