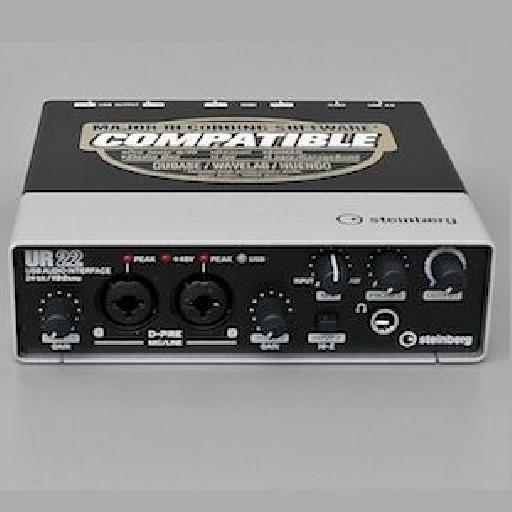 Review: UR22: UR So Beautiful

Language
In a seemingly crowded field of entry-level audio interfaces, does the Steinberg UR22 have the stones to compete? Matthew Loel T. Hepworth delves deeply in this feature review.

In a seemingly crowded field of entry-level audio interfaces, does the Steinberg UR22 have the stones to compete?

The UR22 (street price $149.00/€149.00) may not instantly seize the attention of the DAW-user community. There are a plethora of other affordable 2 x 2 audio interfaces on the market, but the UR22 has some very attractive and unique features that will certainly appeal to a broad audience.

The UR22 is the newest member of the Steinberg UR-series, which all run on USB 2.0 for plenty of audio throughput. While the UR28M and UR824 have on-board DSP for reverb, EQ, and dynamic effects, the UR22 does not. The DSP would require an AC adaptor and significantly raise the cost of production, which is how the UR22 achieves its buss-powered status and dramatically lower cost. It offers 24-bit/192 kHz performance, two ins and outs as well as a headphone jack and MIDI. But the biggest selling point to the UR-series is the quality (or should I say, character) of the microphone preamps known as the D-PRE and we'll see how these perform a little later.

When the UR22 arrived, I was pleasantly startled by the weight of the shipping container. When unboxed, the unit alone weighs 1 kg (2 lb. 3.4 oz.). Suffice it to say, Steinberg has built the UR22 to last. Its heavy-gauge, all-metal construction is remarkable, especially at this price point. 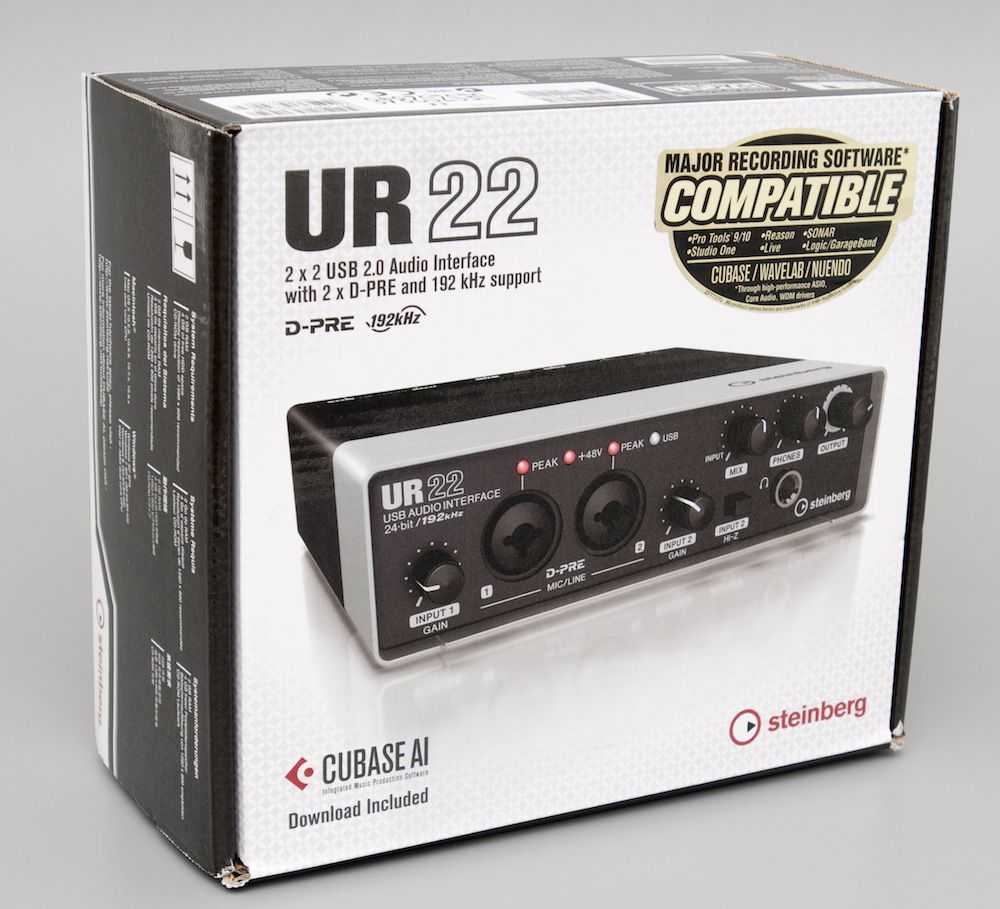 Emblazoned on the front is a sticker informing customers that the UR22 works with Cubase, Nuendo, and WaveLab, but is also compatible with all major audio software like Pro Tools 9/10, Logic, Sonar, etc.

Inside the box you'll find the UR22 along with a 1 m (3.3 ft) USB cable, the owner's manual, a disc with the drivers, and a sheet that allows you to download and license a copy of Cubase AI 6. (Note: Every UR22 user will get a free update to the upcoming Cubase AI 7, which will feature a 192 kHz sample-rate.)

On the front panel you'll find the combo-style XLR/TRS/TS inputs and corresponding Gain controls, along with a button for switching Input 2 to Hi-Z for guitars and basses. Each input has its own peak light, whereas the +48V phantom power is supplied to both inputs simultaneously. Another LED shows USB connectivity. Three knobs offer input/DAW balance, headphone volume, and output level. The headphone jack is conveniently located on the front.

The back panel has the USB 2.0 port and +48V phantom power switch, along with MIDI in and out connectors. The left and right 1/4 inch output jacks offer TRS balanced or TS unbalanced connectivity.

For these tests, I used two MacBook Pros: One was my aging 2006 MacBook Pro 2,2 and the other was my 2011 MacBook Pro 8,2. Both had Boot Camp partitions with Windows XP/SP3 32-bit and Windows 8 Pro 64-bit, respectively. The current drivers were rock-solid and I experienced no anomalies on either platform or OS architecture. The UR-series drivers have been around for well over a year, so the UR22 enjoys the benefit of being introduced last. I used a project with 39 various track types, all at 32-bit and 44.1 kHz and the results were very impressive. Even the old Mac could play the large project at a buffer setting of 384 samples. The newer Mac set at 128 samples offered stutter-free performance for the track-dense, mix-ready project. 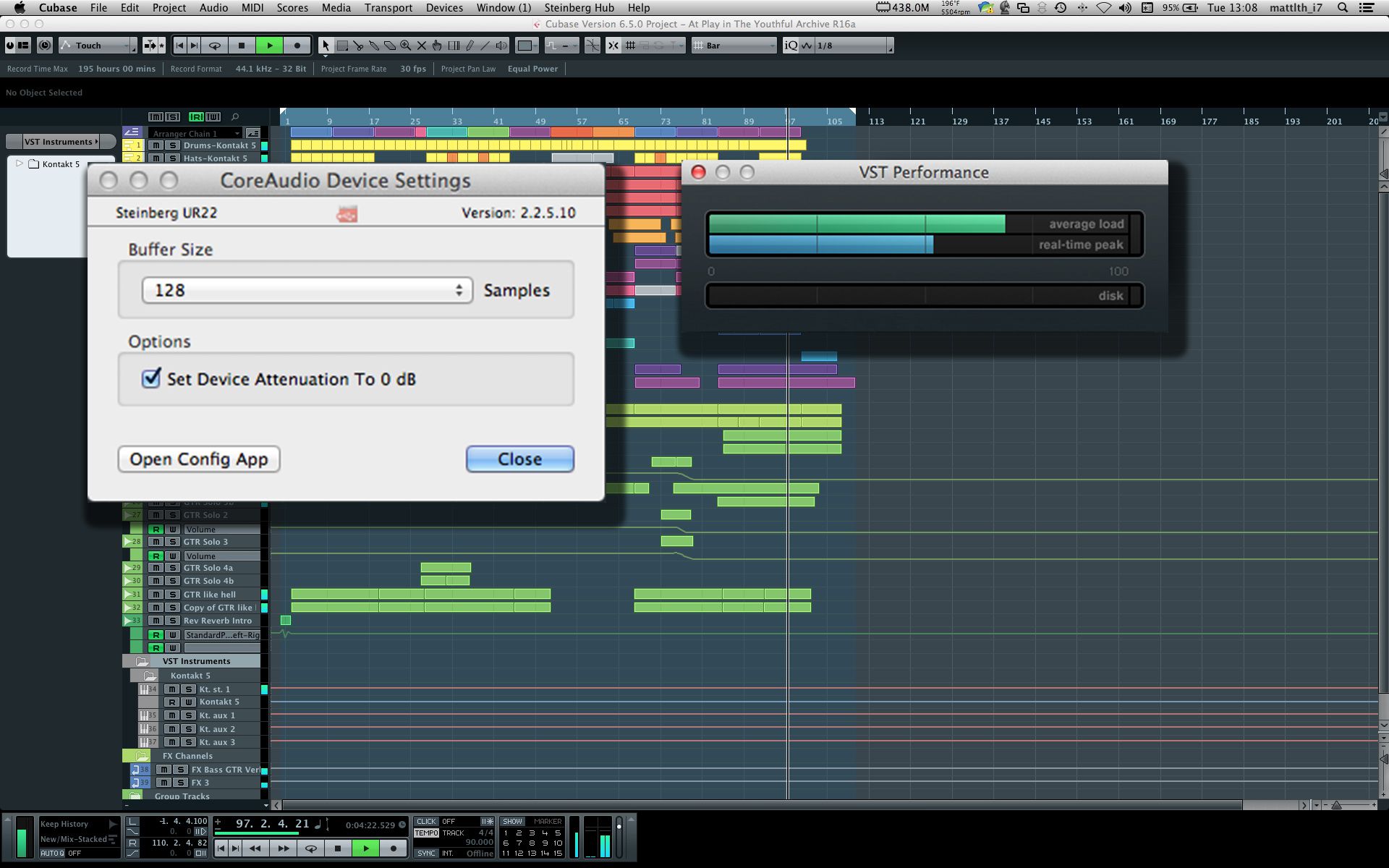 For recording, the UR22 offers both input-only and direct DAW monitor modes with the Mix knob on the front panel controlling how much of each you hear. In Cubase, I used direct monitoring with the knob set to INPUT. This allowed me to hear the inputs directly without any latency. Both input 1 and 2 sum to mono for direct monitoring. If you're recording with one mono source, this is a non-issue. But unless you use DAW monitoring (with the compulsory latency that comes with it), you won't be able to monitor the recording in stereo. Low latencies of 64 or even 32 samples will mitigate this minor issue and every interface in this price range has similar stereo monitoring characteristics.

Like most (if not all) of the interfaces at this price point, the line inputs do go through the gain circuit, rendering them as not 'true' line level inputs. This can be a little funky if the source level clips the inputs even when the Gain knobs are turned all the way down. In that rare situation, you might need to turn down the source volume control. Be that as it may, the line inputs sound great, so there's no need to worry about the gain circuit adversely coloring the sound.

The MIDI interface works flawlessly. The UR22 is the only member of the UR-family that does have MIDI, which is great for old-timers like me with non-USB devices like an Alesis QS7 and a ZenDrum.

The UR22 has two Class-A mic preamps designed by Yamaha (the parent company of Steinberg.) What makes the D-PRE unique is the number of transistors on the input stage. The average solid-state mic preamp uses two input transistors, one for the hot and one for the cold. But the inverted Darlington design (from which the D-PRE gets its name) uses four transistors, two on each hot and cold signal. That allows the preamp to receive very hot signals without the usual increase in distortion.

The D-PRE is famous (or possibly even infamous) for its sound character. Fans will say it's a wonderful-sounding preamp, while detractors say it tends to be less than flat. To my ears, both camps are right. Full disclosure: I've been a fan ever since I bought my first D-PRE-equipped Steinberg MR816CSX, and now I own a total of three. I think it's a killer preamp and it sounds incredibly musical. But the detractors are right when they say it doesn't sound 'flat'. I've never been a fan of flat. Flat is boring. Boutique preamps don't sound flat, they sound really good. I prefer things with personality: People, places, pets, even preamps. Since I've been using the D-PRE, my clients have noticed and commented on how great they sound, and those preamps make the UR22 even more attractive.

The D-PRE is well known for having a lot of gain on hand. I plugged my favorite low-output level microphone, a 150 ohms Electro-Voice RE20, into the UR22 and was able to get plenty of gain even at low levels. The 200 ohms AT U851R also had no problems.

Upon first glance, the UR22 seems to be in a crowded field. After all, many comparably priced interfaces (like the Focusrite Scarlett 2i2 and the PreSonus AudioBox USB) have some similar basic features. However, the rugged design, 192 kHz sample-rate, and wonderful sounding D-PRE mic preamps really set the UR22 apart from the crowd. Despite the two minor quibbles I encountered, the Steinberg UR22 is a great audio interface for users who demand value as well as great sound, high performance, compatibility, and durability.

Check out the UR22 on Steinberg.net!

Thanks first at all for writing this review.

I have one question under the Operation topic you mentioned here:

"Both input 1 and 2 sum to mono for direct monitoring. If youâ€™re recording with one mono source, this is a non-issue. But unless you use DAW monitoring (with the compulsory latency that comes with it), you wonâ€™t be able to monitor the recording in stereo."

Does this affect the sound coming from USB input? I mean if I play a track in my PC via any Media player like WMP or iTunes or a Video for example, is this blended in Mono as per you commented for instruments connected in the Line-In Jacks?