UAD's recreation of a classic Distressor from Empirical Labs is officially endorsed by the makers of the original hardware. Rich Tozzoli finds there's much to like in the EL8.

Having used the hardware for years, I was happy to see the Empirical Labs EL8 Distressor released in the new Universal Audio UAD Software V9.4 for Apollo audio interfaces and UAD Accelerators. Having this power tool on my desktop is a real treat and with that in mind, let’s take a look at a few examples of how easy it is to use and what it can do.

The Foundation Is Strong 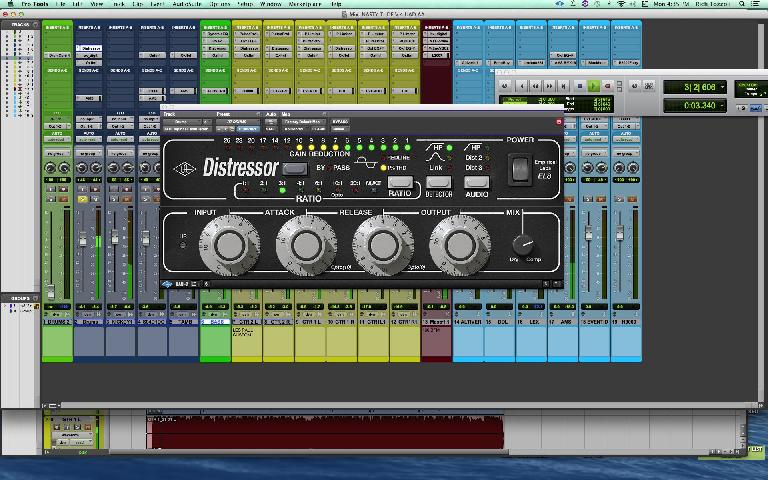 First released in 1993, the EL8 Distressor is a highly flexible compression tool that can go from lean to mean and has graced countless hit records. The UAD plugin version, which is endorsed by Empirical Labs founder Dave Derr, takes the single rack space unit and basically cuts it in half, stacking the buttons on the top and the knobs on the bottom. The first thing I noticed was how big the GUI was for this plug in. Thank you UA! Wow, I hope that many other manufacturers take notice that we users love big knobs and it just makes things that much easier to tweak.

Big picture wise, the Distressor was developed to be a versatile studio compression tool with tons of color with its roots in the classic UA 1176 and Teletronix LA-2A, which are two of my all time favorites. It’s quite easy to use but has many subtle sonic options, with knobs for Input, Attack, Release and Output. Unlike the original, it features a useful Dry/Comp Mix knob as well, which lets you add a little or a lot to your track.

The Layout Is Easy

On the top half, the Bypass button disables the Distressor circuit but keeps it loaded on the UAD DSP, which means you can turn it on and off with no glitches for easy A/B comparisons. Ratio cycles through the ratios and the Detector switch cycles through eight modes of sidechain processing. The Audio switch cycles through 6 modes of audio processing and the Gain Reduction meter shows the amount of gain reduction happening in the compression circuit.

Distressor operates in the cleanest mode when all the LEDs are off in the Audio area. HP - or High-pass, lights up a Green LED and cuts lows at 80Hz. If you want to add a little classic distorted warmth to your sound, try Dist 2 mode, which is a “Class A” 2nd harmonic tube type compression, which lights up a Yellow LED. Dist 2 & HP combine both, and Dist 3, which is the RED LED, adds 3rd order harmonics along with the 2nd, so you get more distortion which gradually flattens out the top and bottom of the waveform. Dist 3 and HP combine both parameters.

The ratio mode sets both the ratio and the threshold. If you want no compression and just some warmth, use the 1:1 mode. With 2:1 and 3:1, they are gentler, often called “parabolic” knees. Taking it further, 4:1 and 6:1 move more towards limiting with steeper knees. With 6:1 and 10:1 in opto, they sound more like some of the classic 60’s and 70’s hardware units.

Here is a useful paragraph I found in the actual Empirical Labs manual, which digs further into the classic emulation sounds Distressor can achieve:

* To simulate the opto-VCA models of old (the LA-2A, LA-3A, LA-4A), try 10:1 "Opto" ratio, with attack on 10, release on 0, Det HP on. Adjust input and outputs to your taste. Keep the attack above 4 to keep the OPTO flavor. Faster attacks will give you a more aggressive sound. Remember our LED metering deflects much faster than the old VU's so don't be afraid to hit the unit quite hard (10-20 dB of compression on peaks). To emulate tubes, try Dist 2 & 3 mode, but let your ears be your guide.

The last mode is NUKE, which turns the LED blue and offers a hard limiting curve with special detector circuitry.

As an example, I applied the Distressor to some electric guitars, a bass, and a stereo drum take from a recent TV composition of mine.

Firstly, with guitars, I use it to bring the sound ‘forward’ in the speakers, not only by adding some gain, but by pushing the Attack up to at least 9 and setting the Release to around 2, so it works fast and hard. Input sets how hard you send your signal into the circuitry and I found it to sound best at around 5 or 6, with a good 10:1 opto so the signal squashes fairly hard. The guitar was a Les Paul Custom recorded through a Marshall head and cabinet with a Line 6 Helix, so the signal was stereo. I also set it to Dist 2 mode, which added a bit of 2nd harmonic distortion to warm up the already distorted signal.

The bass is a 1970 Precision, recorded through a tube DI. I found the 4:1 ratio to sound best, which is a fairly subtle compression. Again, I used DIST 2 for some extra grit, but was able to push the Input up to 7 or so. LIke the guitar, I had the Attack up high and the Release low. Also, like the guitar, it helped push the sound forward and add some overall warm character to it.

With the drums, which were a rock loop, I wanted to try to pull some of the room out of the original sample recordings. This is where I really pushed the Distressor to do its magic. I set the ratio to 3:1, with the Input and Attack up to around 7. The Release was set to 4 and while I pushed the Output to almost 8, I ended up using the MIX knob to pull back some of the overall blend. As you can hear, the drums took on a whole new attitude, with more attack, presence and room sound. Just what I wanted to achieve.

Every input signal will react slightly differently with the Distressor, so it's really a trial and error unit. But with only a few knobs to tweak, it’s just a few twists away from bringing those tracks to life. I personally feel that it's one of the most flexible, useful compression tools available, and it can take a boring track and add a ton of life to it.

Learn more about mixing and processing in the Ask.Audio Academy here.