UAD's Arrow is finally here - a Thunderbolt 3, bus-powered audio interface with DSP and access to the company's world of plug-ins. Matt Vanacoro couldn't wait to get started with it.

If you’re a producer or musician who has gone deep into the Universal Audio Apollo system, you’ve likely been waiting for this day for a long time. The dream of a truly portable UAD system that is bus powered has been on my mind for quite a while, and I’m very excited that day is finally here. I was cautiously optimistic that the Arrow would live up to what I had built up in my mind as the first bus powered interface from UA. I spent 2 weeks with one and here’s what I discovered. 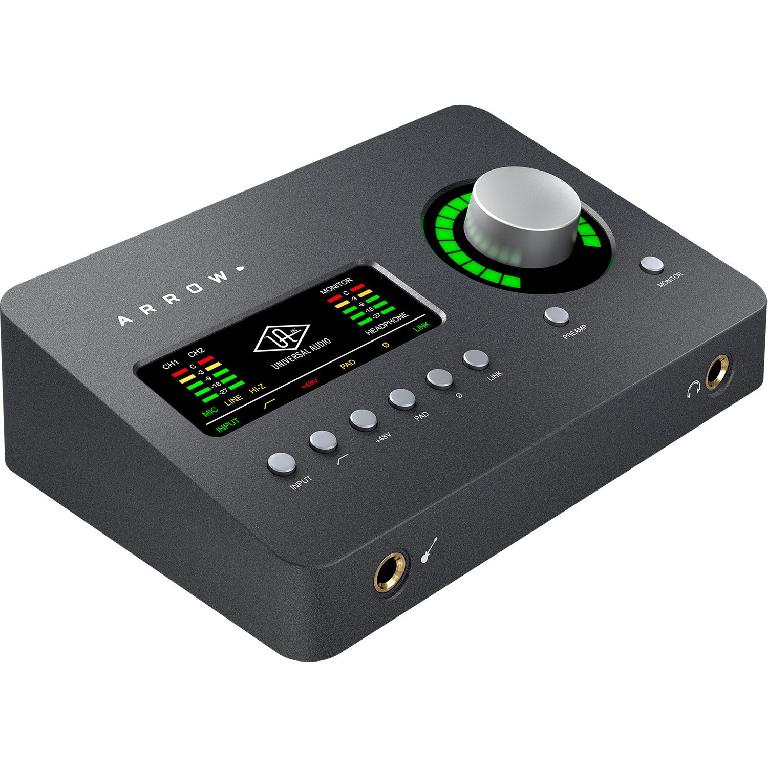 The Arrow is a surprisingly light interface, although not at the expense of build quality. It feels sturdy and for a mobile interface, that’s pretty important. I feel perfectly comfortable tossing the Arrow into my computer bag and hitting the road to work outside the studio. The large rotary knob is significantly smaller than on the Twin, but it retains the LED functionality around it for visual feedback. There are 2 XLR-1/4” combo jacks on the rear of the arrow with 2 Unison mic preamps. There is a stereo L/R output on 1/4” jacks, as well as a single headphone jack on the front. The Thunderbolt 3 port is located on the back, and there is no port for a power adapter. This baby is meant to be powered by the computer. You’ll want to call some attention to this, because the general public is still a little hazy on the difference between Thunderbolt 3 and USB-C. The connectors are visually the same, but the Arrow must be plugged into a Thunderbolt 3 port in order to function properly.

The Arrow utilizes the same console software package that you’ll find on the Apollo series. The plugins are the same, although with a single solo core you’ll have to be a little more efficient than you’re used to if you’re coming from a quad core or (gulp) multiple quad core devices. The routing is dead simple, and the Arrow itself is small enough to put on the top of a keyboard controller. By utilizing Console and virtual buses, you can route UAD plugins into your software setup and get some pretty sweet effects in an ‘outboard style’ with your live keyboard rig if you want! This has been something of a big one on my wish list, so it’s nice to know I now have a reliable bus powered interface that can also handle some of my most used studio plugins.

The Sum Of All Parts

In use, the Arrow lived up to all of my expectations. The Unison mic preamps are definitely more detailed and versatile than your typical mobile interface has access to. The software is incredibly efficient and has been refined over a number of years and versions. The physical build is compact, yet sturdy. I’m a huge fan of what the Arrow has brought to the table, and I’m interested to see where UAD goes with this. Once again, UAD has not only entered a market, but helped to define it at the same time. The Arrow is a fantastic audio interface and hopefully the start of something truly great.

Cons: Only available in solo core at this time. I would have gladly paid a bit more for a duo or quad core!

I have appended the request I made to the UA people as part of their survey. They gave me a $25 discount coupon, but no Arrow for Dummies.

Bring on the Matt Vanacoro tutorialsâ€¦
===============Request to UA for an Arrow For Dummies tutorial===============
There is a great passage in â€œMixing With Your Mindâ€, a book written by Michael Stavrou, a guy who worked at EMI studios in the 60â€™s under the general supervision of George Martin. He had always been puzzled at the age and seemingly dilapidated condition of the speakers they used. That perception was changed dramatically one day when he witnessed a sound engineer mixing sounds that came through those speakers to transform the studio into a an Aladdinâ€™s cave of miraculous and beautiful music he had never before heard.

My guess is that there would have been at least some Universal Audio equipment in those studios costing thousands of dollars. But now, the new Arrow and its free on board software allows kids in their bedrooms anywhere in the world access to that equipment that costs thousands (if not tens of thousands) of dollars for a very affordable price.

The only problem is that those kids (and the more elderly) donâ€™t have access to those guys who drew such wonderful music out of the old UA compressors, EQâ€™s and other complicated boxes of electrical components.

I had been using an Audient converter with my Mac Book and Native Instruments Guitar Rig insert in Ableton. So when I cranked up my Arrow, I took out the Guitar Rig insert on the Ableton page and replaced it with the UA Marshall Classic Plexi insert â€¦ on the Ableton page. Wellâ€¦ thatâ€™s what I had always done, right? I then added the UA Marshall Classic Plexi insert to the UA console page. I kept getting a message about the DSP having been overloaded and disabled.

It took the guys at the Canberra Better Music store at which I had purchased the Arrow about ten minutes to diagnose the problem and explain how the console worked.

Maybe UA could get Tom Waterman, who has been doing the PR rounds, demonstrating the Arrow, to get involved in an â€œArrow For Dummiesâ€ video series. The sounds he gets out Arrow and his guitar about nine and half minutes into the video at www.youtube.com/watch?v=hb699IIuuEw
were the main reason I decided to make the purchase. In that video he says he uses â€¦
1. Marshall Plexi Classic
2. LA2A compressor
3. Pultec Pro EQ
4. 610 B used as a driver
5. Sending to a Precision Reflection Engine
6. Adverb reverb

Can we have a more detailed demo of exactly what he is doing, and why, on a AYouTube video?Ask Audio/Mac Pro Video would surely be interested in featuring him doing a course for new Arrow users.