Language
Whether you're looking lustfully at getting onboard the UA audio interface train as a new user, or thinking about upgrading your studio, the new Apollo 8 is a head turner as Matt Vanacoro discovers.

Universal Audio made a huge splash (well, more of a tidal wave!) in the audio world when it first unveiled the Apollo audio interface at NAMM in 2012. Three years later, the first major overhaul to the Apollo system is finally making its way into the hands of audio producers, mixers, and engineers everywhere. How does it stack up, and is it worth an upgrade for current Apollo owners? 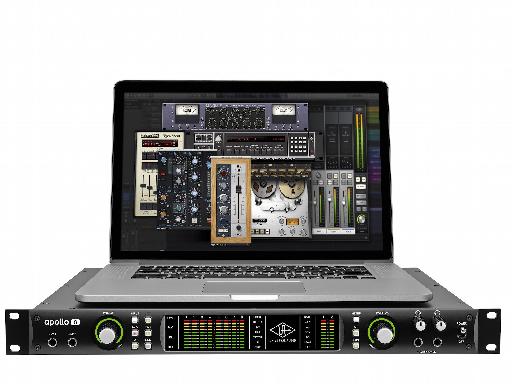 The Down and Dirty

If you're not familiar with the Apollo environment, let me break it down for you quickly. Apollo 8 is a Thunderbolt 2 audio interface with 10 analog inputs, (4 of them XLR combo and 2 front panel Hi-Z,) 10 analog outputs, one S/PDIF I/O, and a pair of ADAT optical inputs that can be S/MUXed for 192k input. The XLR, (and Hi-Z,) inputs are also loaded up with Unison preamp matching technology that actually changes the electrical impedance and resistance of the preamp to assist in creating accurate models of vintage preamps.

Finally, there is a DUO or Quad-SHARC processor onboard to power the UAD-2 plugins. The plugins actually run on the hardware itself, saving your system valuable resources as well as allowing for use of plugins while tracking/monitoring with no noticeable latency. It's a system that connects hardware and software in an incredibly useful way and it works amazingly well.

"The new Apollo is truly the sum of its parts."

The new Apollo is truly the sum of its parts. While there may not be a single game-changing feature that drives current users to upgrade, there are a TON of upgrades and tweaks that make the Apollo 8 even more convenient than its predecessor.

First, there has been an upgrade to the A/D conversion signal path. With that, you get increased signal-to-noise stats, more dynamic range and better total harmonic distortion. You'll wind up with anywhere between 3'"6dB of more dynamic range when compared with the original Apollo. I found this claim to be true and audible. The Apollo 8 definitely sounded a bit more '˜broad' on the inputs.

"Apollo 8 allows for the line inputs to bypass the preamp circuitry."

Second, the Apollo 8 allows for the line inputs to bypass the preamp circuitry. This was a big one for me as I have a lot of preamps and don't use all of the XLRs on my original Apollo. Now I know that my pres are going directly to the A/D with no additional coloring.

Third, the headphone monitoring system has been juiced to allow for more gain and a lower noise floor. Paired up with some active headphones like the Blue MoFi, I found that I was able to make the most volume-hungry session players happy.

There are a host of other upgrades that I discovered over the course of the week I spent with the Apollo 8 that made me smile. The Hi-Z inputs are now Unison capable, so those sweet guitar pedal effects can be put into a Unison slot and the inputs match impedance perfectly. There are now physical buttons on the front of the Apollo for alternate speakers, monitor dim, and mono summing. Much like the line input circuitry, the line output circuitry can also be bypassed if you are using a monitor controller system. There's a sample rate indication on the front panel now (hooray!), and the text labels are now all illuminated. Instead of a label with a glowing dot under it, all of the front panel labels on the screen now glow when engaged'"making it easier to read at a quick glance.

"The new Apollo 8 is clearly an amazing choice for anyone looking to purchase a new audio interface or get into the UAD-2 system."

I love my original Apollo. It is a piece of gear that truly transformed my workflow and allowed me to offer musicians tracking in my studio a better experience. The concept of latency-free monitoring with world-class effects makes recording a better experience in my studio. The whole '˜effects on the box' paradigm allows me to load up my tracks with whatever they need without having to worry about pushing my system too hard.

"With Console 2.0, you can now add up to 4 thunderbolt Apollo systems, and it makes just as much sense to simply add an Apollo to your system as to upgrade your current one."

The new Apollo 8 is clearly an amazing choice for anyone looking to purchase a new audio interface or get into the UAD-2 system. Was it enough to convince me (a current Apollo Quad user) to upgrade? I'll be honest, at NAMM the answer was no'¦. but then I used the Apollo for a week. I got used to the improved monitoring and power the headphone outs gave me, I came to rely on the Hi-Z Unison plugins, I came to love the increased audio bandwidth and bypass options in the signal path and'¦arrrrgghhh ok, Universal Audio take my money!!!!

The answer is yes, a resounding yes. With Console 2.0, you can now add up to 4 thunderbolt Apollo systems, and it makes just as much sense to simply add an Apollo to your system as to upgrade your current one. I'm a big fan of the flex core I/O driver, and I've already made setups that '˜show and hide' the inputs I may or may not be using for any particular project. If you're looking to get into the Universal Audio ecosystem, now is the perfect time. If you want to add more I/O to your existing Apollo system, the Apollo 8 is a worthy upgrade.