Language
Need a good gate? Not a garden gate... or your regular noise gate/trance gate. We're talking an audio gate that does it all: ducking, rhythmic and dynamics. G.W. hopes Unfiltered's G8 is up to it.

One thing that I'm always on the hunt for, in plug-in land, is a good gate. Not just a regular, old, dynamic gate, to keep out the noise, and also not just a trance gate, or rhythmic gate, of some sort that introduces ducking, and so on. I've been looking for a gate that does both. Recently, thanks to Unfiltered Audio, I think I may have found what I'm looking for. So, I'd love to tell you about it.

You can tell that the guys at Unfiltered Audio have had some time in the studio. G8 is one of those plug-ins that shows the developer has 'been there' in many possible capacities. All the features are there, and a few more, that you'd expect. But, let's start with the most exciting and handy. First, the graphical display is worth its weight in gold. And, as someone that usually prefers to use his ears, as opposed to what the monitor is showing me, G8 offers such an intelligent, real-time method for displaying what is being cut, ducked, etc. And, I actually use it for a change! 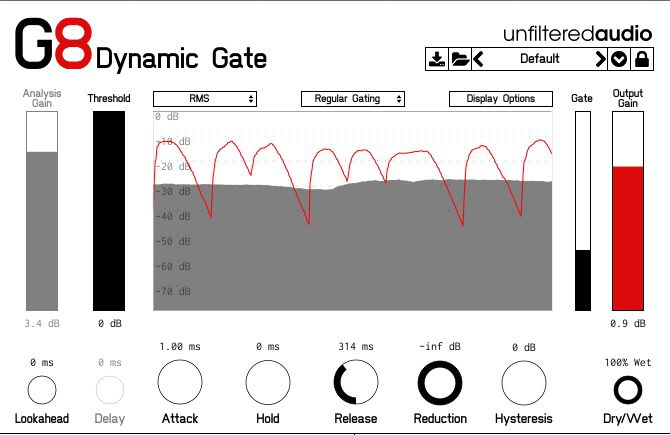 As I mentioned above, I really have been wanting a good, all around gate that can act as a traditional gate, while still having the features that I need for trance gating, side-chaining and ducking effects. G8 offers practical solutions for both. Basic adjustments like Attack, Release, Hold and Look Ahead features are all there. Along with RMS and Peak modes. Very standard. But, when these classic features are mixed with custom performance modes like One-Shot and Cycle, suddenly ideas for house, dubstep, progressive trance and more start inflating my imagination.

Cycle mode is seriously cool. Especially when being used with the MIDI mode, supplied by G8. Press a key, and suddenly you get cyclical ducking that rises and falls on its own volition. I thought there would be a Sync mode for this. But, as it happens, you don't really need it. In Cycle mode, Attack, Hold and Release affect the waveshape of the ducking cycle, additionally letting you adjust the timing, and so on.

This leads me to another bit of cool polish added in to G8, that goes along with the example above. In addition to having a MIDI mode, where you can press a key, and induce gating on the spot, you also have the option to choose the MIDI key that will trigger the gating, as well. Not just for Input, but also for Output... individually. Meaning that both flow of audio In and Out of Gate can be controlled by different, individual MIDI keys. Very, very cool.

In G8's Expert Mode, you have individual input meters for up to four sidechain inputs coming in to G8. For a change, you can see what multiple incoming signals are doing! These inputs also include, individually, a high pass and low pass filter for corrective, or creative processing. This is a section which you'll find yourself experimenting for... like me... several hours. The possibilities for new, and exciting rhythmic effects introduced in this mode is expansive. It's almost like having Reason's Alligator as a VST/AU plug-in, which is something I've long sought after.

Let's cut to the chase, here. G8 is a pro-level gate that is designed for both the more classic production routines, as well as the boutique features that all of us tweakers want, and need. But, it really goes beyond that. With careful planning and beautiful execution, Unfiltered Audio have supplied us with not only a corrective effect, but also a beautiful instrument, in unto itself. But, the new company is also backing an idea in which I feel strongly. You buy this plug-in, you own it. No serials, no dongles, etc. It's purchased off Steam, which was a wonderful experience. Though, as I was not a Steam user, up until this purchase, I did have some additional registrations, and such.

Either way, I loved my purchase. G8 is incredible.